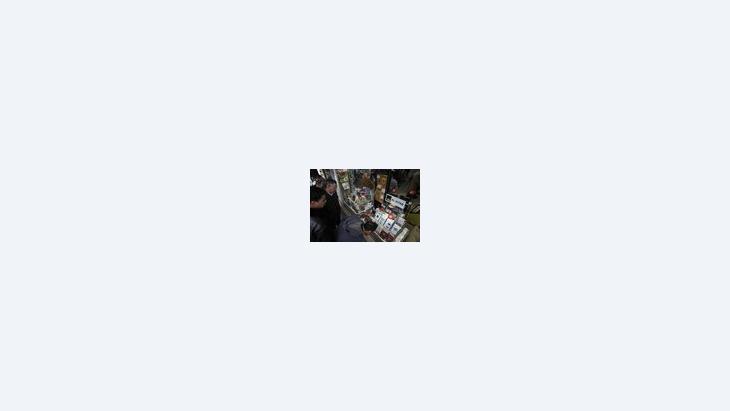 Tunisia's Book Market after Ben Ali
An End to Visas

A whole shop window full of banned books: Tunisia's literary life is blossoming after the end of Ben Ali's dictatorship. In the old days, every book had to be approved by the interior ministry – now critical works are selling like hot cakes. By Lena Bopp 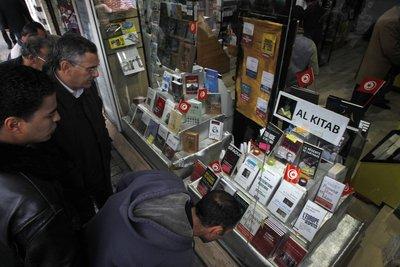 The gates are opened: Now that imported books no longer need a visa and that the censure is lifted, bookstore's in Tunisia are brimming with new literature and new ideas

​​Everything went very quickly once Ben Ali had left the country. It was only eight days before Tunisia's interim government announced on television that, after lifting censorship of the press, it had abolished checks on imported books. That was on 22 January. That very same day, says bookseller Faouzi Daldoul, he sent a list to France of books he hadn't been allowed to sell for years in his Tunis bookshop Clairefontaine. "It was a great moment."

Under Ben Ali's rule booksellers had to present their orders to the interior ministry before sending them off. Until recently, books needed a visa to be imported to Tunisia, awarded by the ministry. The procedure could take several months, says Daldoul, with controls tightened in the months leading up to the revolution. The ministry never gave its reasons for rejecting a particular title. "We didn't dare to ask because it would have got us into even more difficulties." Everything has changed now – books no longer require a visa.

Books by opposition activists not for sale

​​Selma Jabbès, whose bookshop on Avenue Bourguiba in Tunis was also subject to censorship, says she has decorated her entire display window with previously banned titles. Most of them are books critical of Ben Ali. La Régente de Carthage by the French journalists Nicolas Beau and Catherine Graciet is probably the best known of them. Published in France in 2009, the book describes the rise and the machinations of Leila Trabelsi, the former dictator's wife.

She ordered 1600 copies, says Selma Jabbès. About four weeks later, all she has left is a hundred copies – the rest are all sold. Faouzi Daldoul has a small chain of four bookshops, and confirms that no other book is selling as fantastically as this one in Tunisia right now. Both booksellers point out that imported books are a real luxury in the country. They often cost between fifteen and twenty euro – a high price under Tunisian living conditions.

There was never an official list of banned books. But Faouzi Daldoul once went to the trouble of writing down all the titles he couldn't order. This unofficial blacklist contains mainly political books and works of political theory, for example on historical dictatorships (Les grandes dictatures de l'histoire by Ibrahim Tabet) and human rights (Emmanuelle Duverger's Les droits de l'homme). Many of the books deal with Tunisian history, the history of Islam and the Arab world and the rise of Al Qaeda.

Works by Tunisian opposition activists were also unavailable. Mohamed Charfi's Mon combat pour les lumières (My Struggle for Light) was published posthumously in France in 2009. Charfi was education minister under Ben Ali from 1989 to 1994 and later became a dissident – his book is only now available in Tunisia.

Most Tunisians still buy their reading material in bricks-and-mortar bookstores. Internet ordering is impossible because the Tunisian Dinar is not freely convertible – and so not recognised as payment by many companies such as Amazon. "The situation is unclear in the country at the moment, so people want to find out about the past to help them see more clearly for the future," says Daldoul. He's therefore concentrating on buying non-fiction.

In the past, there were relatively few problems with censorship when it came to novels, with only a small number of fiction titles being refused a visa. They included Denis Diderot's The Nun and Michel Houellebecq's Platform, which was unwelcome in Tunisia because of its criticism of Islam. According to Daldoul, that's still the case. Houellebecq's latest work, Map and Territory, winner of the prestigious Prix Goncourt, has certainly prompted the worst sales he has ever seen in his sixteen years as a bookseller.

Media Freedom in the Arab World
Unchecked Farce
The Yemeni army besieges a newspaper to prevent a certain item of news from entering the public domain. In Kuwait journalists are convicted for uncovering a rigged horse race: Arab regimes are making a laughing stock of themselves as they endeavour to restrict the freedom of the media. By Hamid Skif

Tunisia and the European Union
Rebooting Democracy
Much to the disappointment of protesters in Tunisia, both individual EU member states and the EU itself were slow to react to events in the North African state. However, as Tunisia's most important political and economic partner, the EU now has the opportunity to make amends by supporting regime change in a constructive manner. Isabel Schäfer reports from Tunis

END_OF_DOCUMENT_TOKEN_TO_BE_REPLACED
Social media
and networks
Subscribe to our
newsletter