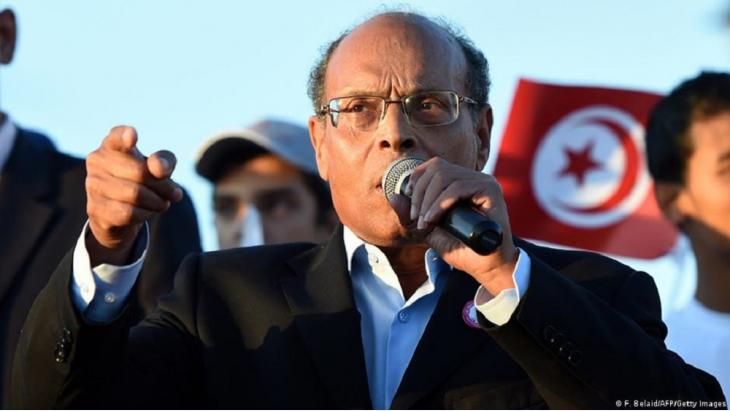 Tunisia's ex-president Moncef Marzouki
The conscience of the Arab Spring

Moncef Marzouki was Tunisia's first democratically elected president after the fall of dictator Ben Ali. Today he is the most prominent critic of increasingly counter-revolutionary developments under President Kais Saied. Commentary by Ali Anouzla

The Arab Spring was born without any actual leadership. It was led by young people and nourished with the aspirations of people thirsting for freedom and dignity. Yet if we look today for the person who most embodies the conscience of this Spring, after more than ten years of popular uprisings in one Arab country after another, Moncef Marzouki’s name immediately comes to mind.

Marzouki was the first Arab president to take power in 2011 in Tunisia, in the wake of the first successful popular revolution in the Arab world. The revolution was at its height, a few days after Zine El Abidine Ben Ali’s flight, and the country was in chaos, consumed by a collective fear of the breakdown of the state. The revolutionaries were bewildered, leading their angry marches this way and that in the middle of Bourguiba Street, heading in the direction of the Interior Ministry’s HQ. Again and again, they tried to get to the government’s main offices in the Kasbah. At this same time, it was announced that Moncef Marzouki had arrived back in Tunisia.

I was at Carthage Airport that day, where people turned out in their hundreds to greet the man who had become a symbol of the struggle and of the opposition during the era of the ousted dictator. One of the most memorable images of the Tunisian revolution was when the masses carried Marzouki on their shoulders, chanting with one voice, "Moncef Marzouki is our president."

This was a spontaneous tribute worthy of this iconic figure of struggle and steadfastness who had spent years in opposition at home and even longer years in exile in France. Marzouki declined all kinds of blackmail and temptation which the Ben Ali regime had perfected as a means to silence its opponents or to buy them off, to the point where he became a constant thorn in the side of the old regime. 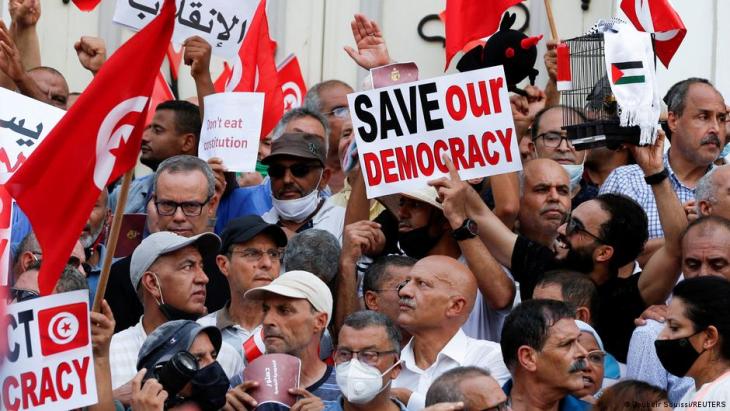 Protests against the authoritarian course of President Kais Said: many Tunisians fear a relapse into the time before the Arab Spring in 2011. Today, human rights activist and Tunisia's first president after 2011, Moncef Marzouki, is the most prominent critic of the new development in the country. Tunisia thus "joins the events in the region, the series of coups in Egypt and Sudan, the civil wars in Libya, Yemen, Syria, Iraq and finally the collapse of the state in Lebanon," writes Ali Anouzla. "The list of conspiracies against the Arab peoples is indeed long"

In a moment of euphoria about the revolution which had led him to return to his country, carried aloft on people’s shoulders and with a wreath around his neck like an Olympic champion, Marzouki declared: "I am the political refugee, the one who had neither money nor status, despite which I have returned to my country in triumph, whilst the tyrants who chased me out of it have fled in fear."

For those familiar with Tunisian affairs, this was not the first time Marzouki’s name had appeared in the headlines. He didn’t wait to hitch a ride on the back of revolution, as many did. As a doctor, he sensed the danger of the tyrannical regime long before others. More than most, he foresaw the fall of that regime, because he understood very well how to diagnose its maladies.

As they say in medicine, making the correct diagnosis is half the cure. Marzouki was adept at seeing what was wrong, and he saw early the symptoms (and the signs) of the demise of the regime that was subsequently brought down by the revolution. Anyone who looks back over his statements and writings over the past ten years will find in them realistic farsightedness about events today. Marzouki combined the experience of a seasoned doctor, the sense of a committed politician, and the piercing insights of a determined fighter.

Anyone who looks today at what Marzouki was subjected to in the way of manoeuvrings to misconstrue his past struggle, as well as attempts to haul him into court in Tunisia on spurious charges and to get him to exile himself once again in France, can see that his opponents have no clue as to what he’s made of and how he learned not to give in.

“Kais Saied was a nobody during the Ben Ali dictatorship"

Moncef Marzouki's childhood was spent in exile; he and his family were forced by Habib Bourguiba's regime to leave Tunisia and to settle in Morocco. When he came of age, he returned to his country in opposition to the old dictator, Bourguiba. He endured hardship, harassment and prison during Bourguiba’s reign and during that of the ousted Ben Ali. Every time he came out of prison he was more resolved; he has a character which is both stubborn in its struggle and forbearing in dialogue.

Thus, he always used to say to those who noted his constant opposition to the status quo, even after he had become president of a free Tunisia that a person does not become an opponent by choice, but out of necessity. He would constantly return to this theme in statements which summed up his philosophy of life and his experience: “I found myself in opposition by force of circumstance, because I had no choice, other than to remain silent.”

Anyone who looks even briefly at the recent past will find out who stayed silent out of fear. And Kais Saied, the president who wants to put Marzouki on trial today, was but a nobody in that silent majority which praised the dictator for his actions and strengthened his backbone.

Therefore, do not expect Marzouki to remain silent today or tomorrow as long as he is able to raise his voice. He did and does this every day, denouncing the return of dictatorship to Tunisia in a shabby populist garb. 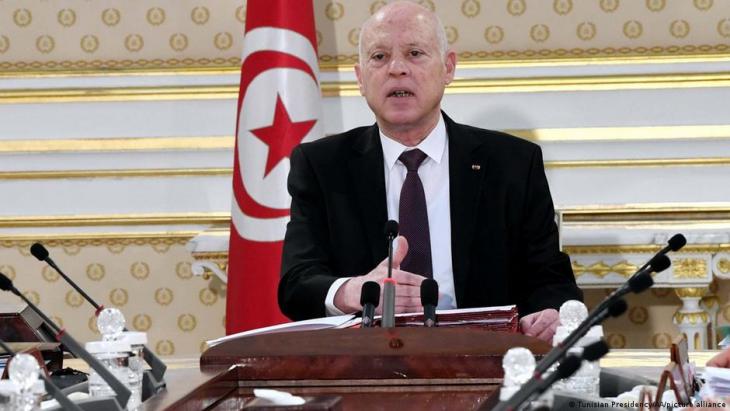 On the way to a new autocracy? At the end of July, Tunisian President Kais Saied used an emergency article in the constitution to depose head of government Hichem Mechichi, suspend the work of parliament and lift the immunity of members of parliament. Unlike Moncef Marzouki, Kais Saied was not part of the opposition under Tunisia's ex-dictator Ben Ali, writes Ali Anouzla. "Anyone who looks even briefly at the recent past will find out who stayed silent out of fear." Kais Saied, "was but a nobody in that silent majority which praised the dictator for his actions and strengthened his backboneA look back reveals who once hid in the ranks of the silent out of fear"

He has long been warning of the tsunami of counter-revolutions stirring in the depths of the oceans, a harbinger of the destruction and annihilation of all the nascent attempts at democracy in the Arab world, heralding the subversion of the Arab Spring.

Marzouki remains true to himself – yet today he faces a court ruling intended to put him behind bars for his views and his attitude. A Tunisian court has sentenced him in absentia to four years in prison for allegedly undermining the security of the state from abroad.

This is Marzouki whom they want to lock up for his stances and opinions. He is the campaigner who risked everything in 1989 to establish the very first organisation calling publicly for human rights in Tunisia. It was a time when defending human rights could have untold consequences and be potentially fatal for all those involved.

It was Marzouki himself who announced his candidacy to lead the transition, three days after Ben Ali fled Tunisia, when the whole world was still in shock at what had happened. He successfully led the country at a painful turning point in its history, amid exceptionally turbulent circumstances across the entire Arab region. Under Marzouki’s leadership, Tunisia became a beacon, lighting the way for all the Arab peoples seeking freedom and dignity.

Today, Marzouki returns to the fore in his favourite trench: the confrontation that he has never abandoned. It is the oxygen he breathes in the face of every sudden epidemic of tyranny which he combats relentlessly and without compromise.

His remains the loudest and most prominent voice of the Tunisian opposition. His criticism is not, however, directed directly against President Kais Saied, but against the forces of counterrevolution that brought the protests of the Arab Spring to a standstill and on which Saied's coup is built. Tunisia thus joins the events in the region, the series of coups in Egypt and Sudan, the civil wars in Libya, Yemen, Syria, Iraq and finally the collapse of the state in Lebanon.

The list of conspiracies against the Arab peoples is indeed long. Many may disagree with Marzouki’s positions, his impulsiveness, his boldness, his frankness, his obstinacy, his rigidity, his forbearance, his dovishness, his predictions and his expectations, but one can but respect him. With his great humility, he demands admiration from us all.

Ali Anouzla is a Moroccan journalist and writer, director and editor-in-chief of the online media platform Lakome, founder and editor of several Moroccan newspapers, and recipient of the 2014 Leaders for Democracy award, given by the Project on Middle East Democracy (POMED).

Chinese President Xi Jinping's visit to Saudi Arabia in December 2022 may have rattled Washington, but it simply highlighted the Arabs’ desire to diversify their foreign relations ... END_OF_DOCUMENT_TOKEN_TO_BE_REPLACED

Nouara may be 65, but she is ready to join thousands of others who burn their ID and pay traffickers for the chance of a new life in Europe. Zineb Bettayeb reports END_OF_DOCUMENT_TOKEN_TO_BE_REPLACED

In Doha, Arabs from Morocco, Tunisia, Egypt and Algeria are gathering to celebrate the first ever FIFA World Cup to be held on Arab soil. The criticism from Europe? Over the top, ... END_OF_DOCUMENT_TOKEN_TO_BE_REPLACED

"Rebel Game: The Power of Football in the Middle East and the Qatar World Cup", an anthology published by Middle East researchers Jan Busse and Rene Wildangel, takes the upcoming ... END_OF_DOCUMENT_TOKEN_TO_BE_REPLACED

After a two-year hiatus, the Arab League re-convened at the beginning of November in Algiers against a backdrop of uncertainty and discord. By Pierre Boussel END_OF_DOCUMENT_TOKEN_TO_BE_REPLACED
Author:
Ali Anouzla
Date:
Mail:
Send via mail

END_OF_DOCUMENT_TOKEN_TO_BE_REPLACED
Social media
and networks
Subscribe to our
newsletter