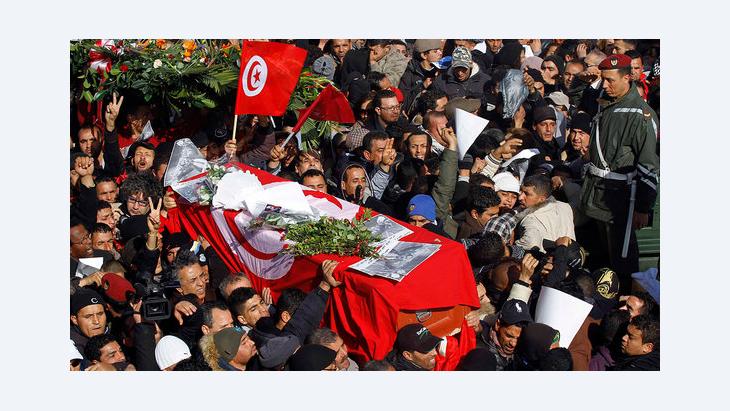 ﻿The murder of the leftist politician Chokri Belaid has plunged the nation's already beleaguered government into deep crisis. In particular Ennahda, the strongest party in the coalition, now has its back to the wall. Sarah Mersch reports from Tunis

﻿The murder of Chokri Belaid has united Tunisia to an extent unprecedented in recent history. It was an electric shock that fused the divided Tunisian opposition across party lines and caused an explosion of fury against the government. Hundreds of thousands of people gathered last Friday (8 February 2013) to pay their last respects to the murdered man.

A long funeral procession wound its way through the streets of the capital in the pouring rain to the Jellaz cemetery, where Belaid was laid to rest in a martyr's grave overlooking the hills of Tunis. Two days previously, he had been killed in cold blood, shot in the head and neck as he left home to go to work.

A state of hectic activity

Nearly a week after the attack on the 48-year-old lawyer, Tunisia's political sphere has been snapped out of its torpor and is spiralling into a state of hectic activity – but without any concerted focus. For the first time in the two years since the rebellion against former dictator Zine El Abidine Ben Ali, it is not clear where the Mediterranean nation is headed. 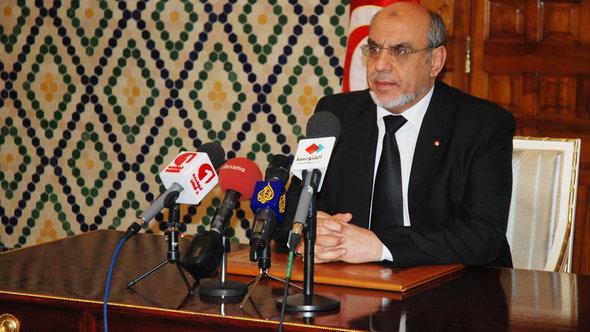 Ploughing a lonely furrow: On the day of the murder of Chokri Belaid, Prime Minister Hamadi Jebali announced plans to form a government of technocrats. However, his own party, Ennahdha, is against him in this matter

​​On the day of the murder, Prime Minister Hamadi Jebali (Ennahdha) announced plans to form a government of technocrats aimed at leading the nation into elections. This announcement was in effect a double admission of guilt: The current government led by his party has failed – neither has it succeeded in gaining some control of the nation's social and economic problems, nor has it managed to stick to its own imposed deadline and write the new constitution within a year. The Prime Minister has himself failed to carry out a pledge, issued six months ago, to reshuffle the cabinet.

"The problem is not the government, but Tunisia's political class as a whole," says lawyer Elyes Essghaier, speaking at the funeral of his colleague. The government must admit to its mistakes, he says, just as the opposition must behave more responsibly and not continue to stoke political tensions in the current transitional period in the run-up to elections. "As long as we don't have legitimate, democratic institutions, and no independent judiciary to offer protection against a return to a dictatorial system, then Tunisia remains under threat." Up to now, efforts to reform Tunisia's judiciary and security apparatus in particular have fallen by the wayside.

With the back to the wall

In the meantime, Hamadi Jebali now has his back to the wall, not just as Prime Minister but also as Secretary General of his party. While his announcement concerning the formation of a non-political government of functionaries was generally well received by the opposition and the populace, his own party is against him in this matter. 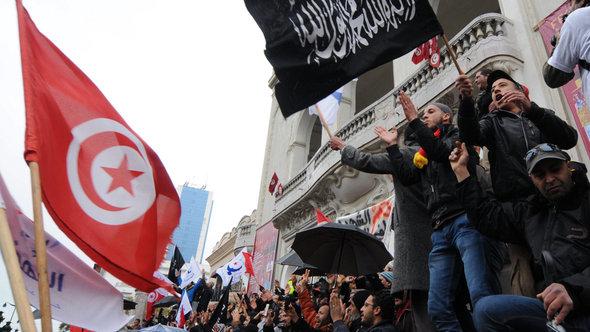 Fierce opposition to the opposition: At the weekend, up to 3,000 supporters of Ennahda took to the streets of Tunis calling for more stability and in support of the government, and to demonstrate against France, the former colonial ruler

​​The conflict that has been brewing for a long time within Ennahdha itself – between moderate forces and representatives of an extreme agenda, but also between the generations and between those who went into exile and those who served long prison sentences during the rule of Ben Ali (among them Jebali himself) – is threatening to cause the collapse of the party.

Meanwhile, the Ennahdha wing opposing Jebali's initiative took the bull by the horns: At the weekend, up to 3,000 of the party's supporters took to the streets of Tunis calling for more stability and in support of the government, but above all to demonstrate against France. The former colonial ruler, say the protesters, is responsible for the current chaos in Tunisia. In response, the opposition says this claim is merely a way of diverting attention from the nation's own problems.

Jebali announced that he would resign as Prime Minister if he did not succeed in forming a new government in the coming days. But not only did he throw down the gauntlet without consulting his own party, he also omitted to discuss his plans with junior coalition partners Ettakatol and the Congress for the Republic (CPR). Last weekend, the latter announced it would withdraw its ministers to "provisionally put the resignation on ice" at the beginning of the week.

In the wake of Belaid's murder, public rage is focused on Ennahdha. Many citizens accuse the party of responsibility for the crime, of having fomented a climate of violence through its lax approach to extremists, even within its own ranks. Since elections to the constitutional assembly in October 2011, Ennahdha has succeeded in steering public political discourse to focus primarily on questions of identity and religion. This is now backfiring on the party, as many of its supporters are now disenchanted. 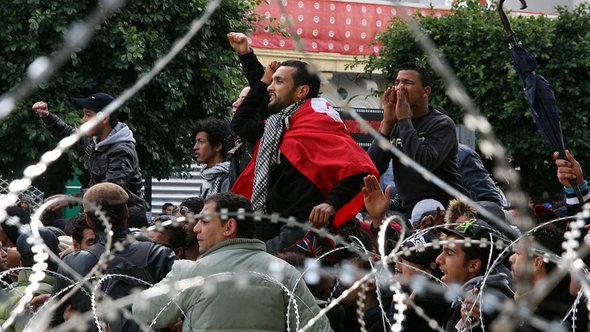 For many Tunisians, the primary concerns are economic development, justice and stability. The government, under the leadership of Ennahdha, has not delivered on its pledges to the public, Sarah Mersch writes

​​"We voted for Ennahda because we thought they were god-fearing. They've quickly forgotten God, and now they're only bothered about their jobs," said one demonstrator in front of the interior ministry on the day of leftist opposition activist Belaid's killing.

For this protestor, just as for many Tunisians, the primary concerns are economic development, justice and stability. The government, under the leadership of Ennahdha, has not delivered on its pledges to the public – just like its secular predecessor, the interim government led by Beji Caid Essebsi, whose Nida' Tounes alliance has since grown to become the second most important political power in Tunisia.

The stakes are high

It remains unclear who was really behind the attack on Belaid. Jebali told the French newspaper Le Monde that "an entire apparatus is behind it, with one strategy". This was a political attack aimed at much more than the just the person Chokri Belaid, he said. "He is the victim, but not the target. The target is all of Tunisia. We have to adjust to very serious consequences," said the Prime Minister.

The lawyer Essghaier is also convinced: "We mustn't make any premature accusations. Belaid's killer aimed to incite Tunisians against each other and plunge the nation into chaos." Whether, as is currently the subject of speculation in Tunisia, the Salafists or militia sympathetic to Ennahdha were behind this, or perhaps loyalists of the old regime who want to destabilise the nation: the murder has come at an extremely unfavourable time for the governing coalition.

And as they deal with the fallout from this crime, it is much less about questions of Tunisian identity or about a conflict between Islamists and secular forces, and much more about good governance. At stake is Tunisia's progression to a democracy.

Home
Print
Newsletter
More on this topic
Tunisia in Turmoil after Chokri Belaid Killing: Between Anger and GriefAfter the Assassination of Chokri Belaid: Searching for the RingleadersInterview with Ennahda Leader Rachid Ghannouchi: ''The Old Regime Is Still Not Dead''
Related Topics
Arab Spring, Arabellion, Ennahda movement, Tunisian Revolution
All Topics

Recep Tayyip Erdogan, disappointed by the European Union’s reluctance to integrate Turkey into its ranks, has re-directed his country’s diplomacy toward the Maghreb and Africa to ... END_OF_DOCUMENT_TOKEN_TO_BE_REPLACED

The rollout of coronavirus vaccines in the Middle East and North Africa is already taking place on a massive scale, with the United Arab Emirates leading the way. Nevertheless, ... END_OF_DOCUMENT_TOKEN_TO_BE_REPLACED

Tunisia has launched a successful transition to democracy, but difficult economic and social times lie ahead. According to political scientist Said AlDailami, Europe should focus ... END_OF_DOCUMENT_TOKEN_TO_BE_REPLACED

Mass protests began in Egypt on 25 January 2011. They triggered the overthrow of long-time ruler Mubarak. Ten years later, many human rights activists and journalists are in ... END_OF_DOCUMENT_TOKEN_TO_BE_REPLACED

Mass protests began in Egypt on 25 January 2011. They triggered the overthrow of long-time ruler Mubarak. Ten years later, many human rights activists and journalists are in ... END_OF_DOCUMENT_TOKEN_TO_BE_REPLACED

Recent unrest shouldn't come as a surprise to anyone who's followed Tunisia's trajectory. The image of the North African country as the only "survivor" of the uprisings in the ... END_OF_DOCUMENT_TOKEN_TO_BE_REPLACED
Author:
Sarah Mersch
Date:
Mail:
Send via mail

END_OF_DOCUMENT_TOKEN_TO_BE_REPLACED
Social media
and networks
Subscribe to our
newsletter