Tunisia's Opposition Movement
Stumbling Blocks on the Road to Democracy

The opposition is clearly relieved about the overthrow of the dictator Ben Ali. Yet the movement needs time to reconstitute and prepare for elections. Alfred Hackensberger reports from Tunis

"The time of oppression is over" says Ahmed Brahim, whose opposition party holds three seats in the Tunisian parliament; it is a phrase that could be used to sum up the hopes of the entire Tunisian opposition movement

​​The office of the Movement for Renewal in central Tunis is all hustle and bustle. The friends and members of the Tunisian opposition party are in an exuberant mood despite the curfew, lootings, arson attacks and continuing exchanges of fire in the city.

In the wake of Zine al-Abidine Ben Ali's resignation and his flight to Saudi Arabia, the overwhelming emotion is one of hope for a better, democratic future for Tunisia. "A 24-year era of repression has come to an end," says Ahmed Brahim, whose opposition party holds three seats in parliament. "That's what we always hoped for, but we never believed it might really be possible."

This is a feeling he most likely shares with most Tunisians. For the first time since President Ben Ali took over from his sick predecessor Habib Bourguiba in 1987, people are free to state their opinions and form political organisations as they see fit. "The time of oppression is over," says a visibly delighted Brahim. "Now we have to look to the future."

Yet it looks as if the former president's longstanding acolytes are not ready for such change. Acting as agents provocateurs, they have been staging drive-by shootings, targeting the opposition (buildings and people alike) and trying to rob and set alight factories and homes.

"These are armed gangs with police and secret agents in them," says Tarek Chaabouni, one of the Movement for Renewal's members of parliament. Their aim, he says, is to disrupt the transition from the old regime to a democratic society and to cause maximum chaos. "The strategy behind it is this: they want to show the public in Tunisia how safe and good life was under Ben Ali – in comparison to what life will be like under the future politicians."

But the people aren't to be fooled. Locals in Tunis have set up militia groups to keep their residential areas under permanent guard. Armed with sticks and long wooden batons, small groups stand in front of barricades, guarding their possessions. The army tolerates their presence on the streets during the curfew.

"The Tunisians won't let themselves be suppressed any longer," says Ahmed Brahim, the leader of the opposition party, which played an active role in and helped organise the protests that began after a 26-year-old unemployed academic set himself alight on 17 December. 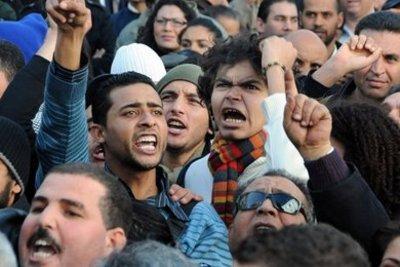 "Out with the RCD! Out with the party of the dictatorship!" Resistance to politicians who were close to the former president remains high despite the overthrow of Ben Ali

​​Brahim would like to set up a national committee comprising all the opposition parties, NGOs, trade unions and social organisations in order to amend the election legislation and prepare for elections. "That's the only way a sensible transition is possible," says Brahim in his office on Avenue de la Liberté.

However, a government of national unity will now be in charge of this transition. Fouad Mebazaa, sworn in as interim president on Saturday, has taken over negotiations. Tunisia's supreme court had previously decided to apply article 57 of the constitution, making the speaker of parliament step into the shoes of the former president, Ben Ali.

According to the constitution, presidential elections have to take place within 45 to 60 days. "If you take the whole thing seriously," says Samir Taeibh, a professor of law at the University of Tunis, "it's not possible in that time period. You need at least six months."

Election legislation has to be changed, he explains, and the parties need enough time to find candidates and present themselves properly to the public. As the law stands, every party that fields a candidate has to present the signatures of at least 30 MPs who approve the candidacy before the party can take part in the election.

"With the current parliamentary majorities, that could be a stumbling block for every one of the opposition parties," says Samir Taeibh with reference to the 152 of the total 189 seats held by Ben Ali's RCD party.

The professor has little faith that the new 77-year-old president, Fouad Mebazaa, or his prime minister, Mohammed Ghannouchi, will push forward the democracy process with full enthusiasm.

After all, the two of them were loyal followers of Ben Ali and are still seen as figureheads of the despised old regime. Their names are synonymous with the secret service, corruption, social disadvantages and the extravagance of the ruling elites.

The nexus of Tunisian corruption

Difficult political inheritance: Fouad Mebazaa, until recently the speaker of the Tunisian parliament, has been sworn in as president

​​The tone of the cables from the US embassy in Tunis dating from June 2009 recently published by Wikileaks was blunt: "Whether it's cash, services, land, property, or yes, even your yacht, President Ben Ali's family is rumoured to covet it and reportedly gets what it wants." It is "often cited as the nexus of Tunisian corruption."

"Ben Ali's wife, Leila Ben Ali, and her extended family – the Trabelsis – provoke the greatest ire from Tunisians," wrote the American ambassador Robert F. Godec. He referred to common barbs about the first lady's lack of education, low social status and conspicuous consumption. Leila Ben Ali was a hairdresser before her marriage.

No wonder then that demonstrators looted a villa belonging to a member of the Trabelsi family – to the horror of German and British holiday-makers in the popular resort of Hammamet. Several hundred protesters, mainly young people, had arranged to meet via Facebook: "Hammamet today: with our blood, with our soul."

The police and coastguard did not intervene when the villa was looted and trashed. Companies and property belonging to Ben Ali's family were also attacked in other cities. In Tunis, a branch of the Zeitouna Bank, which was founded by the dictator's son-in-law, was burnt down. Kia, Fiat and Porsche cars, which used to be sold in Tunisia by members of the president's family, also went up in flames.

Mondher Thabet, the president of the opposition Liberal Social Party, is strictly against a revolution that upends everything from one day to the next. He wants "a step-by-step dialogue involving all democratic forces" to carry out reforms of the constitution and legislation – a process in which he says the Islamists should also be involved.

The role of the Islamists

Their relevance has not yet been taken into account, says Thabet. During the protests, however, Tunisia's Islamists have been the only party not to have made an independent appearance. Apart from an attack on a synagogue on the holiday island of Djerba in 2002, killing 21 people, Tunisia had remained mercifully unharmed by radical jihadists.

A figure of hate for many Tunisians: while life for ordinary citizens became increasingly difficult, 53-year-old Leila Ben Ali, second wife of the former president, and her family reportedly amassed a fortune

​​The Al-Qaeda Organisation in the Islamic Maghreb did in fact issue a statement during the protests, claiming it sympathised with the demonstrators and calling on them to introduce Sharia law in Tunisia after the dictator was toppled. Yet the people demonstrating on the streets want nothing to do with this. They have been calling for freedom of expression and free and fair elections, not an end to the secular Tunisian state.

After 22 years in exile in London, Rashid al-Ghannushi intends to return to Tunisia, he has stated. The 69-year-old is the leader of the Islamist party Ennahda, which has been banned in Tunisia since the 1990s. Hundreds of members were prosecuted at that time, with many going into exile.

Only last month, seven men were given prison sentences for allegedly planning to revive the organisation. Rashid al-Ghannushi said he was in contact with opposition politicians in Tunisia and was prepared to be part of the government of national unity. "It is all difficult, however," he said. "After all these years of repression, our allies are disorganised."

Qantara.de
Overthrow of President Ben Ali in Tunisia
Jasmine and Gun Smoke
The uprising began as a revolt by a neglected generation of young Tunisians with no prospects in life. Within less than a month, it developed into a movement of such force that it swept away the country's autocratic president. Beat Stauffer sends us this analysis of events

Interview with Sihem Bensedrine
"The EU is an Accomplice of this Criminal Regime"
The people's uprising in Tunisia is not just about the state of the economy, but also about civil rights and dignity, says Tunisian opposition activist Sihem Bensedrine in this interview with Reiner Wandler

END_OF_DOCUMENT_TOKEN_TO_BE_REPLACED
Social media
and networks
Subscribe to our
newsletter