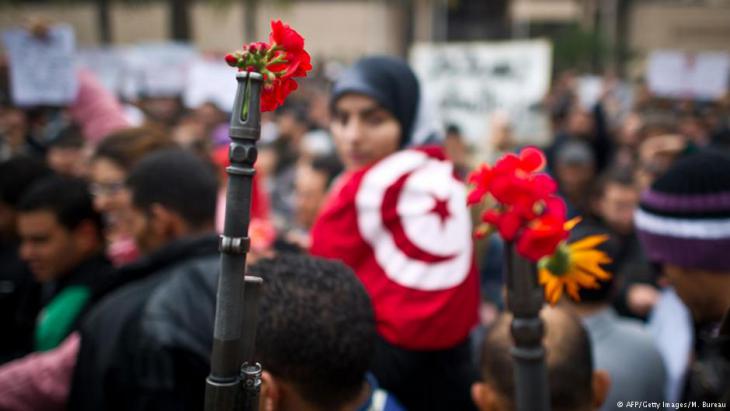 The problem with truth

One year before its mandate expires, Tunisia′s Truth and Dignity Commission is struggling to complete its work within a volatile domestic political climate. With the ruling party opposed to the transitional process and new reports of torture and abuse emerging, the country′s democratic gains are in danger. By Fatim-Zohra El Malki

In late February 2017, the Tunisian Truth and Dignity Commission – most commonly referred to by its French acronym, IVD – announced its upcoming rounds of public auditions set to take place in March. The IVD has been commended as yet another part of the ″Tunisian success story″ that fosters positive prospects for nation-building in the young democracy. Notwithstanding these claims, the volatile domestic political climate makes the execution of the ongoing transitional justice process, including the IVD itself, a strenuous exercise.

Since November 2016, the IVD has been enjoying greater visibility, as public hearings have been broadcast on television channels and live-streamed on social media platforms. Yet public interest also showcased the intense partisan debate on transitional justice, a major source of conflict between the different political parties in power since the revolution.

The Truth and Dignity Commission, whose mandate covers violations committed between Habib Bourguiba′s return from exile in 1955 to December 2013, is an outcome of the much debated Transitional Justice Law passed in December 2013. The IVD aims to uphold the goals enshrined in Article 1 of the Transitional Justice Law and is tasked with processing over 62,000 cases, the majority of which are political and human rights abuses such as unlawful arrests, disappearances and torture.

Another crucial component of the IVD′s mandate is redress for economic crimes, mainly involving high-ranking officials of the Ben Ali era. Within the purview of the IVD, Ben Ali′s son-in-law Slim Chiboub, who was under house arrest for twelve charges of aggravated corruption, agreed to return his looted assets from foreign banks after private hearings with the IVD′s committee for arbitration and reconciliation – having hoped pursuing the charges with the IVD would allow him to settle complaints and re-enter politics.

Family members of the destitute former first lady Leila Trabelsi also submitted requests for financial arbitration; her nephew, Imed Trabelsi, is currently undergoing an arbitration process at his own request. The committee on arbitration and reconciliation does not preclude prosecuting perpetrators of financial crimes in other courts, but seemingly offers more lenient penalties than the traditional judicial process does – hence its popularity among the perpetrators of economic crimes who wish to re-enter politics with a clean public profile.

While imperfect, the financial arbitration process offered by the IVD remains a better accountability alternative than President Beji Caid Essebsi′s proposed economic reconciliation bill, which would grant complete amnesty to those involved in state corruption and the plundering of the nation′s resources.

The reconciliation bill, much debated in parliament and widely criticised by civil society groups, seeks to implement alternative transitional justice mechanisms that would grant complete amnesty, rather than the IVD′s intention to instigate national dialogue on past abuses. Within the realm of party politics, the proposed bill is viewed as a manoeuvre to weaken the IVD′s mandate, while its proponents – namely Essebsi′s bloc – introduce it as a necessary measure to revive the Tunisian economy. 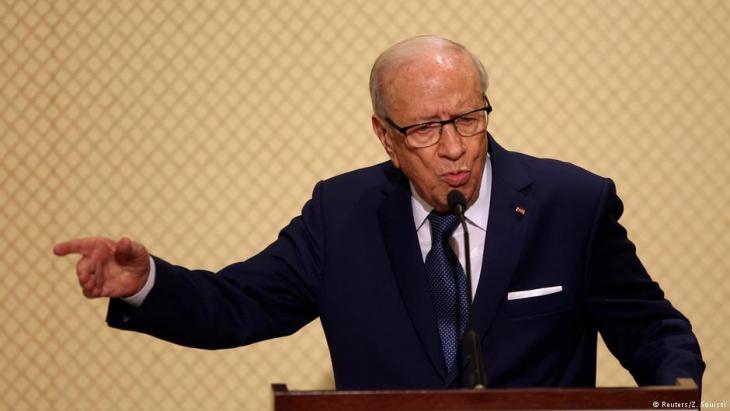 Little support for the IVD: "during his presidential campaign in 2014, Essebsi stood as a firm critic of transitional justice, stating that Tunisia needs to ″not talk about the past″ in order to move forward with its transition. Nidaa Tounes therefore has a vested interest in proposing alternative measures to the IVD and other transitional mechanisms to safeguard its eroding public standing," writes El Malki

Since the contested adoption in 2013 of the Organic Law on Establishing and Organising Transitional Justice, the IVD has been plagued by internal and partisan strife that hinders its work. Following the 2014 elections, which initially allocated the majority of parliamentary seats to Nidaa Tounes – a secular party created and headed by President Essebsi – and to Ennahda, the IVD attempted to maintain a fragile balance of power between parties competing over ideological dominance within the parliament.

The IVD′s composition has been subjected to the scrutiny of Nidaa Tounes and smaller parties critical of the Troika, the Ennahda-dominated tripartite alliance that elected the commission′s original fifteen executive members in 2013. Headed by Sihem Bensedrine since its inception, the commission now only numbers nine executive members, less than the required two-thirds quorum needed to implement decisions.

The IVD relies on the abstract wording of its charter to escape claims of illegality caused by the absence of quorum. Additionally, sacked IVD members, backed by their respective political powers, have brought allegations of corruption and despotism against Bensedrine. In January 2017, parliament fell one vote short of forming a commission to investigate corruption claims against her.

Members of Nidaa Tounes, who unanimously voted in favour of the investigation, are now appealing the decision to further discredit the commission. In the broader political context, Bensedrine is believed to serve the interests of Ennahda to the detriment of other political players, for example by giving supposed priority to cases investigating abuses against Islamist militants.

This reasoning, however, ignores the fact that the vast majority of cases under the IVD′s mandate involved inhumane treatments suffered by alleged Islamist militants during Ben Ali′s autocratic rule. Moreover, Ennahda′s support for the IVD is not unequivocal, as the party is more inclined to protect the bipartisan balance with Nidaa Tounes than to pursue transitional justice. 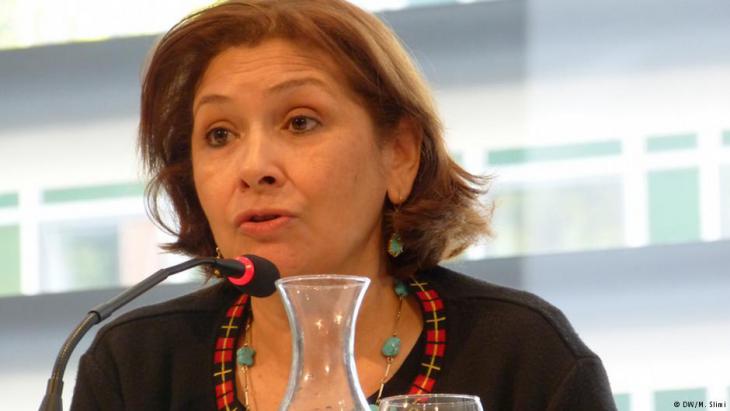 IVD leadership tarnished: in January 2017, parliament fell one vote short of forming a commission to investigate corruption claims against Sihem Bensedrine. In the broader political context, she is believed to serve the interests of Ennahda to the detriment of other political players, for example by giving supposed priority to cases investigating abuses against Islamist militants

With one year remaining in the IVD′s mandate, only 21,000 cases have been closed, about one-third of its docket. Public hearings have been consistently interrupted by sit-ins denouncing the commission′s lengthy procedures and the lack of transparency and quantifiable results. Moreover, citing political manoeuvring and manipulation of the IVD′s objectives, some victims have begun to withdraw their cases, including Habib Guiza, the secretary-general of the General Confederation of Tunisian Workers (CGTT).Although the IVD′s detractors have proposed no comprehensive alternatives, a possible way out would be to restructure the commission′s mandate by including recommendations from Nidaa Tounes, which has been marginalised from the transitional justice process as it currently stands.

The recent escalations of tensions surrounding the IVD, in particular within the present context of media hype over public, high-profile hearings, only impede Tunisia′s opportunity to restore its reputation on the world stage. By being intrinsically opposed to the transitional process altogether and proposing alternative measures that would overshadow the Transitional Justice Law, the ruling party is leaning toward normalising pre-revolution politics. Should the different political parties not come to a unified agreement on their trust in the IVD and by extension in transitional justice as a whole, the process could be aborted and deal a heavy blow to Tunisia′s democratic gains.

As the IVD struggles to make an effective contribution to the Tunisian transitional justice process, an Amnesty International report published in February 2017 documents allegations of torture and abuses that have occurred with increasing frequency as part of the anti-terror measures implemented by Essebsi′s administration.

The state of emergency in place in Tunisia since 2015 and which was just renewed for an additional three months on 16 February, allows the state to implement exceptional measures outside of the realm of due process. The breaches to civil liberties permitted under the state of emergency will only renew the long-standing tradition of abuse with which the IVD is grappling.

Fatim-Zohra El Malki is an independent researcher based in Washington, DC.

Home
Print
Newsletter
More on this topic
Victims of the Tunisian Revolution: The slow and painful search for the truthInterview with Sihem Bensedrine: "We mustn't forget what happened!"Planned ″business amnesty legislation″ in Tunisia: Sweeping history under the carpet rather than confronting the past?
Related Topics
Arab Spring, Arabellion, Democracy and civil society, Human rights, Rule of law, Tunisian Revolution
All Topics

Arab women played a leading role in the protest movement of 2011. Since then, ongoing social transformation has had a considerable impact on their lives. What is their assessment ... END_OF_DOCUMENT_TOKEN_TO_BE_REPLACED

Recep Tayyip Erdogan, disappointed by the European Union’s reluctance to integrate Turkey into its ranks, has re-directed his country’s diplomacy toward the Maghreb and Africa to ... END_OF_DOCUMENT_TOKEN_TO_BE_REPLACED

The rollout of coronavirus vaccines in the Middle East and North Africa is already taking place on a massive scale, with the United Arab Emirates leading the way. Nevertheless, ... END_OF_DOCUMENT_TOKEN_TO_BE_REPLACED

Tunisia has launched a successful transition to democracy, but difficult economic and social times lie ahead. According to political scientist Said AlDailami, Europe should focus ... END_OF_DOCUMENT_TOKEN_TO_BE_REPLACED

Mass protests began in Egypt on 25 January 2011. They triggered the overthrow of long-time ruler Mubarak. Ten years later, many human rights activists and journalists are in ... END_OF_DOCUMENT_TOKEN_TO_BE_REPLACED

END_OF_DOCUMENT_TOKEN_TO_BE_REPLACED
Social media
and networks
Subscribe to our
newsletter