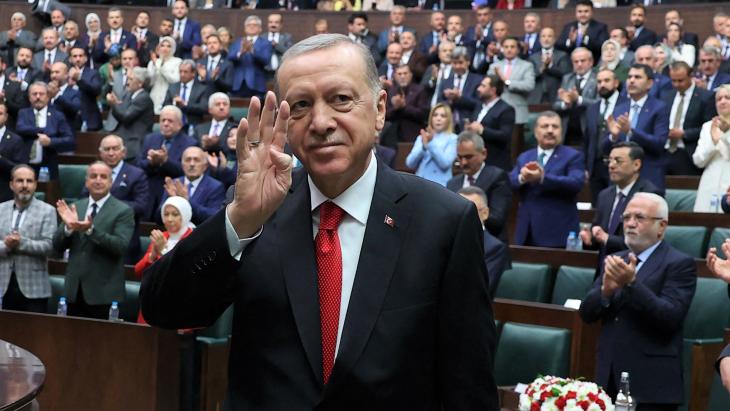 Turkey
20 years of Recep Tayyip Erdogan and the AKP

On 3 November 2002, Erdogan's newly founded AKP, Justice and Development Party, came to power in Turkey. It has ruled the country ever since, becoming more authoritarian with each victory. By Elmas Topcu

Turkey 2002: runaway inflation, high unemployment, huge public debt and corruption. In addition, a three-party coalition with the partners at loggerheads and resignations from within government ranks. Then the 77-year-old Prime Minister Bulent Ecevit fell ill. Back then, Turkey was in the throes of a severe economic and political crisis. New elections were called, and on 3 November the people rejected the established parties. Only two parties made it into parliament. The winner was the inexperienced AKP, the Justice and Development Party, founded only a year earlier, with its strong leader Recep Tayyip Erdogan.

From a standing start, it won an absolute majority on 3 November 2002, taking 363 out of 550 seats. The AKP has won all parliamentary elections in Turkey ever since.

Following his election victory that November evening, Erdogan said in a speech: "As Ataturk said: Rule is unconditionally for the people. After 3 November, a new era begins in Turkey. Today, inshallah, we are opening a new chapter. We are ready to take responsibility for leading Turkey into a brighter future."

The AKP promised to respect the different ways of life of all citizens, to pursue a programme that would improve the work of constitutional institutions and to advance Turkey's accession to the EU. There was initial talk of reforms, equality, justice and prosperity. 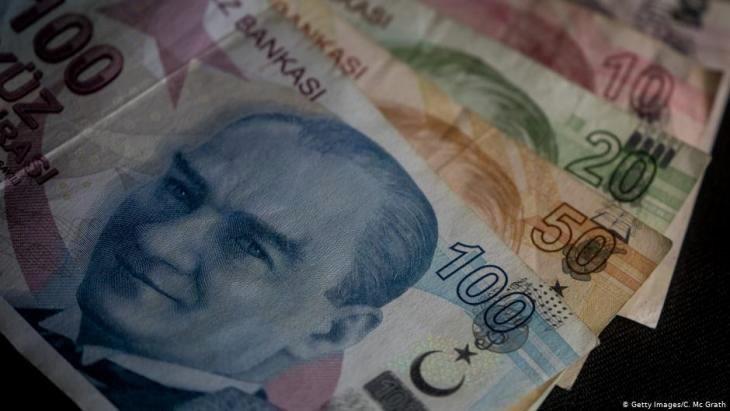 Severe economic and political crisis: in 2002, new elections were called, and on 3 November the people rejected the established parties. Only two parties made it into parliament. The winner was the inexperienced AKP, the Justice and Development Party, founded only a year earlier, with its strong leader Recep Tayyip Erdogan. Yet, what goes around, comes around. Turkey at the end of 2022 is once again on its knees economically. Can the saviour of 2002 pull off the same trick twice?

In the years that followed, the AKP did indeed manage a sustained economic upswing. By 2012, the hard-hit country's gross domestic product had more than tripled. The AKP not only satisfied its voters, it also gained support from social democrats, intellectuals and Kurds. In the years that followed, the party created its own middle class and – by awarding state contracts – a super-rich elite that sustains it to this day.

By making various changes to the constitution, the AKP asserted itself against the influence of the military and the so-called established secular elite. Erdogan's co-founder and friend, Abdullah Gul, was elected president. It was a watershed moment. Never before had an Islamic conservative politician with a headscarf-wearing wife held this post.

Yet in the second half of the AKP's term in office, little remained of the initial promises of reform, strengthening democracy and modernising the country. From the Gezi protests in early summer 2013 onwards, the government became increasingly brutal.

Since the attempted coup on 15 July 2016, Erdogan and his AKP have only been concerned with retaining power. Legislation has been changed, Erdogan's powers expanded and the status of parliament eroded. These days, Turkey is ruled by a regime in which the separation of powers lies in one hand: Erdogan's. Police and prosecutors watch for a sign to take action against critics, artists, teachers, doctors, lawyers, journalists and students. Despite several corruption scandals involving top AKP politicians, their power remains unbroken. There is no prosecution with the courage to investigate them. 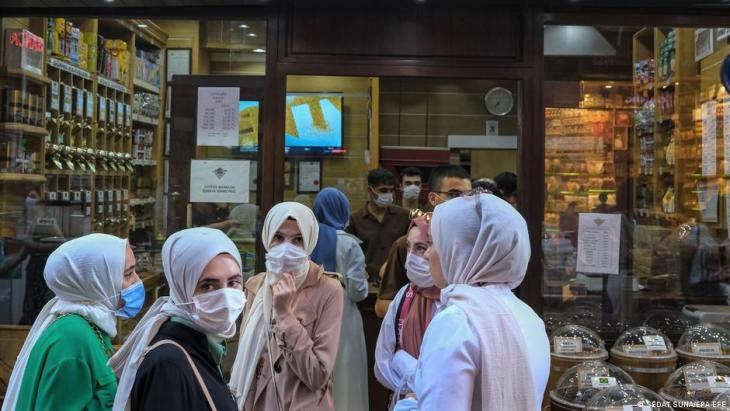 The AKP’s victim narrative: these days the party's ideology and rhetoric fluctuates between a desire for economic modernisation and nationalist-religious fantasies about a return to its former status as a great power. It's a narrative that continues to be dominated by Islamic conservative ideology. The party consistently portrays itself and its supporters as victims of the republic. Accordingly, women wearing headscarves have been discriminated against in Turkey for decades, while devout Muslims have been discriminated against by the ruling secular elite

For Kristian Brakel, head of the Heinrich Boll Foundation in Turkey, the AKP has changed radically since its foundation. What began 20 years ago as a broad conservative rallying movement, which initially also received support from liberals, has over the last 20 years become an Erdogan fan club. Even if the AKP still boasts impressive networks at grassroots level, such as women's associations, neighbourhood associations, business associations or youth groups, it is a party Erdogan has tailor-made to himself.

Brakel also emphasises that nothing remains of the liberal-conservative ideas of the early days. In his opinion, the AKP's ideology and rhetoric fluctuates between a desire for economic modernisation and nationalist-religious fantasies about a return to its former status as a great power. It is unclear how much of this is actually fuelled by conviction and how much by the need to convey soundbite messages to the population.

There is no doubt that what the AKP stands for is becoming increasingly difficult to determine. Its narrative continues to be dominated by Islamic conservative ideology. The party consistently portrays itself and its supporters as victims of the republic. According to this reading, women wearing headscarves have been discriminated against in Turkey for decades, while devout Muslims have been discriminated against by the ruling secular elite.

At the end of October 2022, AKP parliamentary group vice-chairman Mahir Unal presented the party's Islamic conservative constituency as the losers of Ataturk's reforms. Alluding to the introduction of the Latin alphabet at the founding of Turkey, he said: "The Republic has destroyed our language, vocabulary, alphabet and our way of thinking." 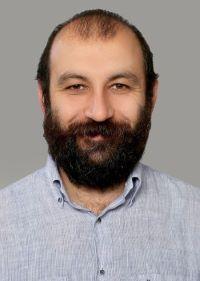 AKP flexibility its strength: "One day Erdogan will be leading a peace process with the Kurds, the next he will take military action against them. Today he may be negotiating with the EU, tomorrow he could be the West's fiercest opponent," says Turkey expert Salim Cevik. Through all this, the Turkish president’s supporters remain loyal. Erdogan’s own personal trump card is Vladimir Putin, who is clearly prepared to back him in the upcoming elections. As Cevik points out, the question is how far Putin is prepared to go and whether his efforts will help the AKP stay in power

Facing harsh criticism, he was forced to back down. He said he was proud of his Turkish language and of his people, the Turks. Nevertheless, he was obliged to resign from his position. He was advised to do so by the AKP because of the poor opinion polls.

For Salim Cevik of the German Institute for International and Security Affairs (SWP), the AKP's "flexibility" is also its strength. In the AKP, Erdogan sets the tone and the party adapts to him. And Erdogan is quick to change his stance, Cevik emphasises. "One day he will be leading a peace process with the Kurds, the next he will take military action against them. Today he may be negotiating with the EU, tomorrow he could be the West's fiercest opponent." And in all this, Erdogan manages to sweep his supporters along with him. According to Cevik, his voters don't resent these contradictions.

Erdogan's AKP also enjoys a large following in Germany. In the 2018 presidential elections, he got 64.8 of the votes from German Turks who went to the polls.

Currently, polls put the AKP between 30 and 32 percent. Together with its alliance partner, the ultra-nationalist MHP, it has just 38 percent. However, Erdogan's approval ratings are much higher than those of his party.

What is new in Turkey this time round? Six very different opposition parties have joined forces to counter the AKP. The Kurds and Socialists have also formed an alliance.

So will the presidency and parliamentary majority remain in the AKP's hands in the next elections in 2023, or will its sole rule be shaken after 20 years? Should the opposition win a majority in parliament, but Erdogan remain in office as president, Turkey expert Brakel predicts an unstable government. He believes Erdogan would govern more autocratically than ever, bypassing parliament. However, the opposition could make life difficult for him – presumably, early elections would be the consequence.

Were the opposition also to nominate the president, however, it would face the massive challenge of delivering swift, tangible improvements on the most important issues, such as migration and the economy, which would not be easy, according to Brakel. There would be a huge risk of the broad opposition front disintegrating once in power. The AKP could then make a comeback in the local elections due in 2024, Brakel concludes.

Salim Cevik from the SWP believes the West and foreign investors would rather try to deal with Ankara without a crisis until then, preferring to postpone any realignment of their Turkey policy. There is one person, however, who will not hold back in his efforts to help Erdogan win: Russian President Vladimir Putin. He is already providing support, repeatedly bringing Erdogan into play as a mediator in the Ukraine crisis, as well as providing him with economic assistance, Cevik continues. The next few months will show how far Putin is prepared to go and whether his efforts will help the AKP stay in power.

Recent efforts to rehabilitate Assad are setting a damaging precedent for accountability, just as the international community is expressing the need to hold Russia to account for ... END_OF_DOCUMENT_TOKEN_TO_BE_REPLACED

Lamya Kaddor, MP for Germany’s Green Party, visited Qatar with a group of parliamentarians. In interview with Claudia Mende, she advocates a differentiated picture and urges that ... END_OF_DOCUMENT_TOKEN_TO_BE_REPLACED

Daniel Barenboim is not only a world-famous pianist and conductor. He has also worked tirelessly to foster understanding and reconciliation between Palestinians and Israelis. By ... END_OF_DOCUMENT_TOKEN_TO_BE_REPLACED

After a two-year hiatus, the Arab League re-convened at the beginning of November in Algiers against a backdrop of uncertainty and discord. By Pierre Boussel END_OF_DOCUMENT_TOKEN_TO_BE_REPLACED

Iran has withdrawn its participation in the Frankfurt Book Fair, accusing the event of meddling in the country's domestic affairs. Organisers have denied the accusation. By ... END_OF_DOCUMENT_TOKEN_TO_BE_REPLACED
Author:
Elmas Topcu
Date:
Mail:
Send via mail

END_OF_DOCUMENT_TOKEN_TO_BE_REPLACED
Social media
and networks
Subscribe to our
newsletter