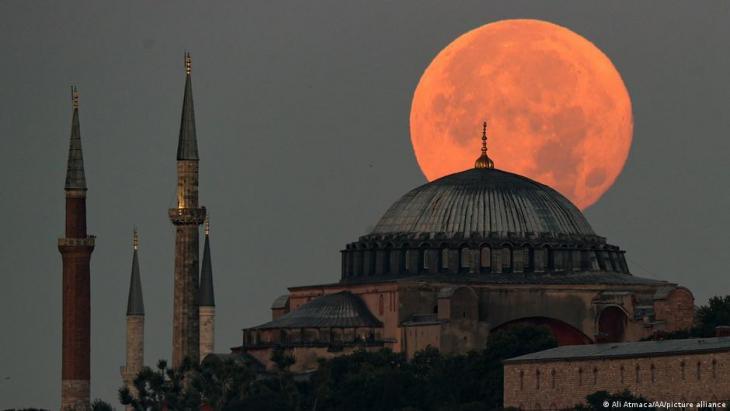 Turkey
A 100-year-old democracy with ups and downs

Turkey will mark the centenary of the proclamation of the Turkish republic in October. But 2023 will be an important year in another respect too: Turks will go to the polls in June to elect their next president – an election that could usher in a new era in its history. By Burak Ünveren

The Republic of Turkey was founded 100 years ago. Since then, the country has experienced a transformation from a single-party into a multi-party system, a military coup in 1960, violence on its streets for almost a decade in the 70s, followed by another coup and many unstable coalition governments in the 90s, and an Islamist rise to power in 2002.

Amid all these minor and major setbacks, the Turkish state, built on Western ideals such as democracy, equality, the rule of law and secularism, has survived and will celebrate its centenary year next year.

How resilient are Turkey's democratic institutions, though, as it turns 100?

Under the leadership of Recep Tayyip Erdoğan, Turkey has increasingly turned its face from the West toward the East. It has associated itself more with Islamic values, made new friends and allies in the Arab world and built up its overseas military involvement, including in Somalia and Qatar, where Turkey's presence has been welcome.

These developments have not made all Turks happy, however, as all this has been accompanied by rising authoritarianism.

Sinem Adar, an expert on Turkey at the Center for Applied Turkey Studies (CATS) in Berlin, takes a negative view of the trajectory taken by the country under Erdoğan. "Turkey today is a prime example of increasing authoritarian practices," she observes. "Since the late 2000s, the country has steadily moved away from the rule of law and effective separation of powers."

Adar is especially frustrated by the turn things have taken after what seemed like auspicious conditions for progress. "Given the country's almost seven decades of experience with competitive multi-party elections and its integration into the Western institutional architecture, the demise of Turkish democracy is arguably one of the most disappointing examples of a global trend," she says. 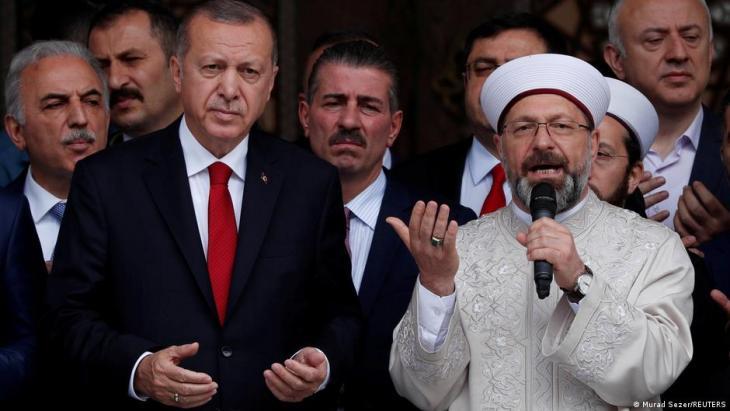 According to Burak Ünveren, religion plays a far greater political role in Turkey today than 20 years ago thanks to Erdoğan's policies and discourse. Pictured here: Turkish President Recep Tayyip Erdoğan (left) and head of Turkey's Religious Affairs Directorate Ali Erbas pray during the opening ceremony of a mosque in Istanbul

One of the founding values of the republic was secularism, or laicism, a concept based on the French model of strict separation between state and religion. The Ottoman Caliphate was abolished in 1924, less than a year after the establishment of the republic. Instead, the Diyanet, the so-called Directorate of Religious Affairs, was founded to give the state more control over the political influence of Islam.

It is fair to argue now, however, that religion plays a far greater political role in Turkey today than 20 years ago thanks to Erdoğan's policies and discourse.

Adar underlines that there has always been a "thin line between religion and politics in Turkey" since the establishment of the republic. But, she says, the past 20 years of rule by Erdoğan's Justice and Development Party (AKP) have brought about a significant difference in terms of "the breadth and depth of the state-sponsored penetration of religion into social life." One can speak of a "clear trend of gradual expansion of Islam into public life, especially in the last decade," Adar says.

The Diyanet has been turned into a gigantic political actor under the AKP's rule, as Adar explains.

"The Diyanet has gained more power than ever with mounting political weight and access to ever-increasing resources. Especially after the failed coup attempt in 2016, it has assumed a key role in the daily reproduction of the narrative that Turkey's ruling elites under the leadership of Erdoğan embody the people's will and defend the nation's authentic and national values, as well as the state's territorial integrity," she says. 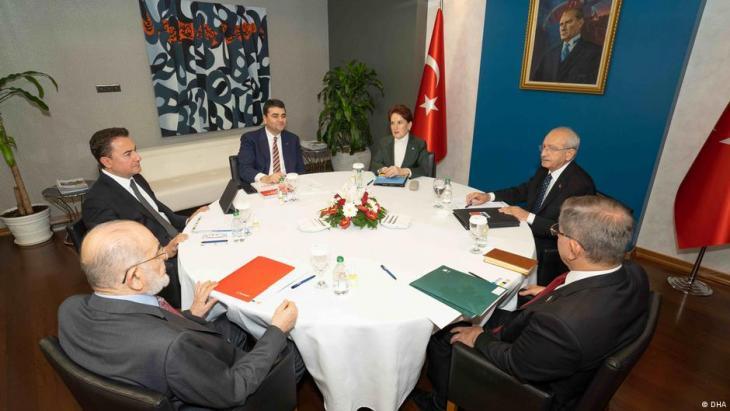 The so-called Table of Six alliance consists of six opposition parties that have joined forces and seek a return to the parliamentary system and limits on the powers of the president. Pictured here (clockwise from front left): Temel Karamollaoğlu of the Felicity Party (SP), Ali Babacan of the Democracy and Progress Party (DEVA), Gültekin Uysal of the Democratic Party (DP), Meral Akşener of the Good Party (IYI), Kemal Kılıçdaroğlu of the the main opposition Republican People's Party (CHP) and Ahmet Davutoğlu of the the Future Party (GP)

Turks will go to the ballot box on 18 June 2023 to pick their next president. Some polls suggest that Erdoğan, whose policies do not go unquestioned by all, could possibly lose if the opposition manages to run against him with a single candidate.

That is still up in the air, however. The so-called Table of Six, which consists of six opposition parties that have joined forces, has not even announced its candidate or candidates yet. The Table of Six wants a return to the parliamentary system and limits to be placed on the powers of the president, which were greatly increased after Erdoğan pushed through significant constitutional changes back in 2018.

Contrary to widespread popular belief, including in Turkey itself, the country still has functioning democratic institutions that ensure free and fair elections to a certain extent. The year 2019 provided a glimmer of hope for those who would like to see a different government: in local elections, opposition candidates won against AKP candidates in Turkey's two largest cities, Istanbul and Ankara.

This proves that Turkey still has functioning democratic institutions and that elections can actually be won against the ruling power, unlike in other authoritarian regimes such as Russia.

But does the opposition really have a chance of winning the election in June? According to Adar, it now has an opportunity to present itself as a credible and powerful alternative to the ruling powers, particularly against the backdrop of "growing societal anger and despair in the face of a governance crisis, coupled with a deepening economic crisis and worsening elite coherency within Turkey's ruling alliance."

But for a transition of power to take place, it is vital that the elections are held fairly. "In order to win an election, [the opposition first needs] to ensure the  [...] security of the ballot box," Adar says.

And what if Erdoğan loses?

But what path will Turkey choose if power does change hands?

The AKP is proud of certain developments, such as the international success of the Turkish-made Bayraktar TB-2 drones. Turkey is also pursuing plans to produce its own fighter jet as well as its own electric car. What could happen to all these projects if the opposition comes to power?

A new government would not only keep these projects but proceed with them in a more practical and democratic manner, according to Adar. 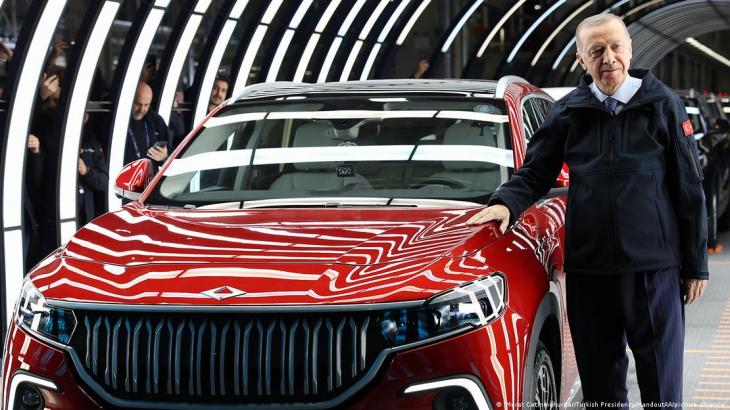 Turkey after 20 years of Erdoğan rule: "Turkey today is a prime example of increasing authoritarian practices", says Sinem Adar. "Since the late 2000s, the country has steadily moved away from the rule of law and effective separation of powers." Pictured here: Turkish President Recep Tayyip Erdoğan stands next to a TOGG C-SUV, the country's first domestically produced electric car

Where does the future of Turkey lie?

In light of Turkey's current trajectory, it can be argued that the European future of the country is in jeopardy.

2023 is destined to be a critical year both for Turkey and Turkey–EU relations, according to Çiğdem Nas, the secretary-general of the Economic Development Foundation in Istanbul, the leading think tank dedicated to Turkish–EU relations.

"If the opposition wins, they will mostly concentrate on a return to the parliamentary regime, and this process will also entail a democratisation agenda. Under such a scenario, we may expect a revitalisation of Turkey's EU perspective," she says.

Nas emphasises that a possible return of the EU reform agenda in the post-election period "may bring about an acceleration of Turkey–EU relations by way of the customs union modernisation, and greater coordination in trade, energy, foreign policy, security and migration policies."

One should however be realistic, she says: "In the absence of any significant change in Turkey's EU reform agenda, efforts to shift the nature of the relations from a candidacy perspective to an interest-based partnership will become more apparent."

Turkey thus might not get to be a member of the club, but remain a critical, privileged partner.

"Despite the freeze of its EU membership talks, Turkey is still in the wider European architecture as a critical actor for European security," Nas says.

Turkey also constitutes the south-eastern flank of NATO and has the second-largest army within the alliance, which makes the country an indispensable security provider. Especially under the current circumstances, where NATO wants maximum unity to counter potential aggressors such as Russia and China, no one in the alliance would desire the loss of such an important member.

Since there is no end in sight to Russia's war of aggression in Ukraine, the role of Ankara as a mediator, in which it has already scored some successes, is also to be expected to bear a lot of diplomatic fruit for Turkey in the coming year.

How is one to convey the history of Islamic images of Muhammad freed from today’s polarised politics? What are the challenges and pinch points of this particular academic ... END_OF_DOCUMENT_TOKEN_TO_BE_REPLACED

A Tunisian farmer attaches a machine to a cow's udder and sets the pump whirring, but he only expects to fetch less than half the normal amount of milk amid soaring fodder prices END_OF_DOCUMENT_TOKEN_TO_BE_REPLACED

Food prices doubled, salaries halved, banks restricting withdrawals: Egyptians now have the same problems as the Lebanese. But if things get worse here, the fallout will be far ... END_OF_DOCUMENT_TOKEN_TO_BE_REPLACED

Any reconciliation between Turkey and Syria’s Assad regime would have disastrous consequences for many Syrians, explains Syria expert Kristin Helberg END_OF_DOCUMENT_TOKEN_TO_BE_REPLACED

Iraq bears the scars of decades of conflict and has seen its antiquities plundered, yet the House of Manuscripts' collection has managed to survive END_OF_DOCUMENT_TOKEN_TO_BE_REPLACED

END_OF_DOCUMENT_TOKEN_TO_BE_REPLACED
Social media
and networks
Subscribe to our
newsletter