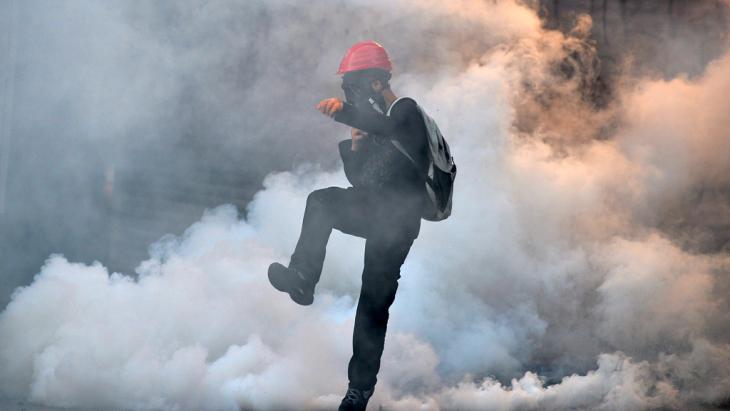 Turkey a year after the Gezi protests

The dream is over

The lack of mass protests against Erdogan's policies on the first anniversary of last summer's demonstrations in Taksim Square and Gezi Park highlights the lack of unity within the Gezi movement and the continuing crackdown on civil society activists and organisations in Turkey. By Luise Sammann in Istanbul

Bullet-proof vests, tear gas, water cannons on all central access roads ... On the evening of Saturday, 31 May 2014, the Turkish police were well prepared for what might come in Istanbul's Kadikoy district. Several hundred officers had been waiting since the late afternoon in the centre of Istanbul's secular opposition district for the demonstrators who planned to commemorate the anniversary of the Gezi protests.

But the masses never arrived. As darkness fell and a ghostly calm descended over the area in the Asian part of Istanbul, only a few curious onlookers faced the police units. The handful of noisy breakers of the peace who did eventually turn up were driven off by an almost unusually gentle volley of tear gas, before the diners in Kadikoy's numerous fish restaurants could feel even slightly disturbed.

So that was it, then, the first anniversary of the historical Gezi protests, which captured headlines and attention across Turkey and the world for weeks in the summer of 2013. Protests that began with resistance to a construction project in Istanbul's Gezi Park and soon expanded to become an uprising that would have brought down any other democratic government in Europe.

As authoritarian as ever

Yet the Turkish prime minister, at whom much of the protesters' rage was directed at the time, was not brought down. The opposite was, in fact, the case: never in the past 12 years of its government has the AKP's power seemed as rock solid as it does now. Not only the clear results of the local elections at the end of March, but also Erdogan's confident domestic and foreign public appearances, his decisions in parliament and his dealings with his political adversaries seem just as uncompromising and authoritarian as ever.

Those who recently wanted to challenge the powerful prime minister either now appear pale and uninspired in comparison (e.g. the largest opposition party, the CHP) or have returned to political insignificance (e.g. the "Gezi Party", which was formed at the end of 2013). 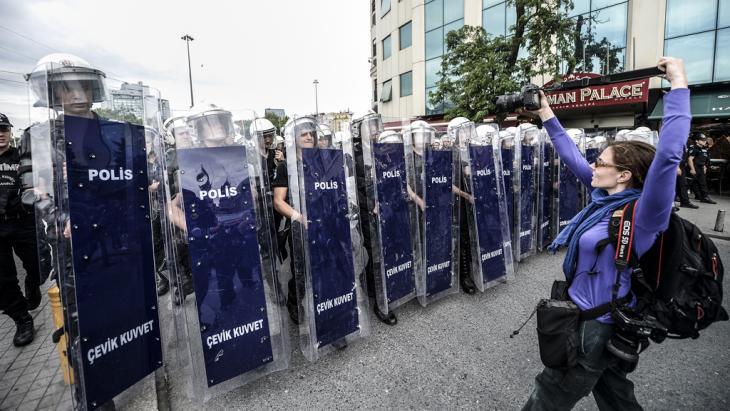 Turkey's combative prime minister, Recep Tayyip Erdogan, warned protesters that police would do "whatever is necessary" to clamp down on demonstrations in Istanbul's Taksim Square on the anniversary of last year's turmoil on 31 May 2014. In 2013, what started out as a small campaign to save the nearby Gezi Park from the bulldozers drew an estimated three million protesters in an outpouring of anger at Erdogan's government. Eight people died and thousands were injured in the ensuing violence as police launched a brutal crackdown, frequently employing tear gas and water cannons. This year, the expected mass protest never materialised

Even the most recent protest call from the "Taksim Solidarity Platform" was tantamount to a admission of defeat: "all the squares, parks, neighborhoods and cities are put under siege [by the government]; preventing us from mourning the killing of more than 300 miners in Soma, celebrating the May 1 Labor and Democracy day, being out in the streets on March 8 Women's day […] To remind the world that we have not given up on our demands and victories, as Taksim Solidarity we will be in the streets in Taksim!"

How sustainable was Gezi?

A year on from Gezi, many Turkish people have come to one conclusion, namely that nothing in their country is better than a year ago. Nothing has changed over the past 12 months that would allow last year's demonstrators to sit back and relax. But instead of raising their voices even more, many of them have since fallen silent.

Isolated clashes with police are by no means comparable to last year's mass movement, which motivated even housewives and mothers, dutiful civil servants and women in headscarves to take to the streets and protest.

On the first anniversary of the protests, the question arises as to whether Gezi was ultimately a failure. Are the AKP's election victory, its recently passed secret service act, the repeated attacks on the freedom of the press and the commonplace police violence not proof enough that the Gezi protests were all for nothing? That it simply isn't enough for hundreds of thousands to shout "No!" all at once if no one is capable of defining what is actually wanted instead or developing political alternatives?

Ataturk disciples, Kurds, secular and so-called anti-capitalist Muslims, transvestite associations and environmental activists – they all agreed and indeed still agree that Erdogan must go. Yet there was never a real consensus within the heterogeneous Gezi movement on who or what should take his place.

Like a birth defect, the problem persists through everything that followed the first protests of late May 2013. The Istanbul political scientist Hatem Ete refers to the Gezi movement as having turned into a kind of "anti-Erdogan party" – a judgement akin to a political death sentence. It is, however, at least the main reason why, from the very outset, the Gezi activists were like a paper tiger facing up to the cohesive power of the government and its supporters. 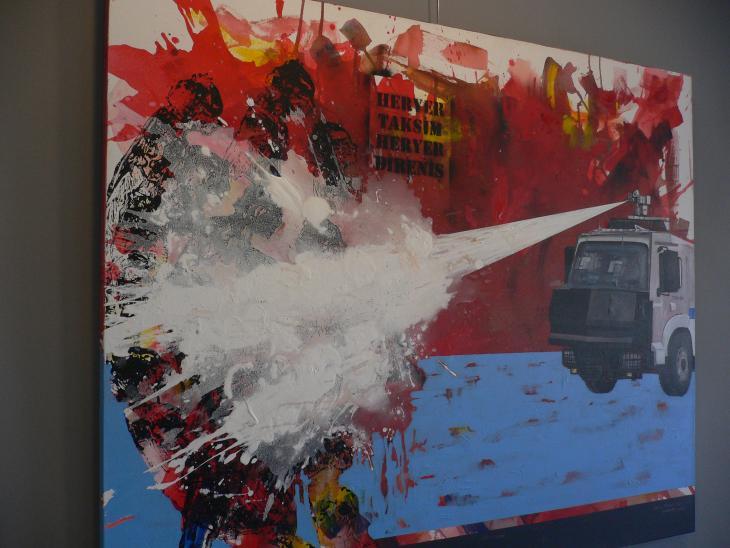 Creative resistance: "Gezi: Come if you dare" is the name of an exhibition currently running in Istanbul. It features 53 Turkish artists and works dating from the last 12 months. Works cover a variety of aspects reminiscent of last year's protests such as water cannons on Taksim Square (see above), tear gas canisters, bullets and trees wearing gas masks

This power has long since become a form of supremacy, as demonstrated not only by the AKP's clear victory in the local elections. The court cases of the past weeks, in which the state demanded up to 98 years' imprisonment for last year's demonstrators, the trials against writers accused of insulting the prime minister in their books, the surveillance cameras that have offered a total overview of the opposition's strategic sites such as Taksim Square and Gezi Park since last summer, and not least the 25,000 police officers on the streets of Istanbul last weekend all make a second Gezi look almost impossible. Many former activists lack not only the hope, but also the courage to return to the streets and protest against Erdogan.

And yet: "Gezi may have failed at the ballot boxes, but it certainly hasn't in society," says one activist. "We haven't abandoned our protest; we've just changed it," say the many founders of citizens' initiatives active in the city since last summer. Some support what they call neighbourhood gardens, some collect signatures against construction projects in their residential areas, some train voluntary election observers for the next ballot. All these are political activities that were previously rare in Turkey, a society generally regarded as rather unpolitical.

What counts is stamina

It is signs like these that keep the hopes of Istanbul's creative and intellectual circles alive. Even while the protests were in full swing in the summer of 2013, many of these individuals warned against exaggerated expectations for the near future. History has shown many times that social movements are not earthquakes. They don't change the world in a matter of seconds, but at the most over years and decades. For this very reason, political observers and experts such as Yuksel Taskin from Istanbul's Marmara University anticipated the initial failure of the "Gezi Party".

Taskin, a political scientist, compares the situation in Turkey to that of France. Directly after the protests of May 1968, the conservative prime minister Charles de Gaulle was confirmed in office by elections. In fact it was a landslide victory – a devastating moment for all those who had hoped for radical change. Yet de Gaulle's later resignation and the transformation that ensued in France also teach us one thing: whether Gezi failed or not can only really be judged in years to come. What counts until then is stamina.

The outpouring of solidarity worldwide following the violent death of George Floyd should prompt us to step back and fundamentally question racist structures and privileges based ... END_OF_DOCUMENT_TOKEN_TO_BE_REPLACED

While the government claims the new lawyers' act will be more pluralistic and democratic, lawyers believe it will harm the right to free trial and split them down political lines ... END_OF_DOCUMENT_TOKEN_TO_BE_REPLACED

The recent murder of Turkish student Pinar Gültekin by her ex-boyfriend has sparked outrage in Turkey. Women's rights activists are calling for the government to tackle the ... END_OF_DOCUMENT_TOKEN_TO_BE_REPLACED

The photos of the first Friday prayers in Hagia Sofia in 86 years triggered passionate and diverse responses around the world. Surrounded by a coterie of ministers, Turkey's ... END_OF_DOCUMENT_TOKEN_TO_BE_REPLACED

Relations between France and Turkey reached an historic low in June after Turkish ships allegedly targeted a French warship in the Mediterranean, resulting in France suspending ... END_OF_DOCUMENT_TOKEN_TO_BE_REPLACED

Comments for this article: The dream is over

Why is the world ignoring the fact that the local elections had a vast number of recorded incidences of fraud.

AKP won the elections, a fact that I do not argue with. They certainly did not however win Ankara, whatever the official result says.

Their "strong" showing in elections is a 6% decline on the last general election, and includes an element of fraud.

END_OF_DOCUMENT_TOKEN_TO_BE_REPLACED
Social media
and networks
Subscribe to our
newsletter