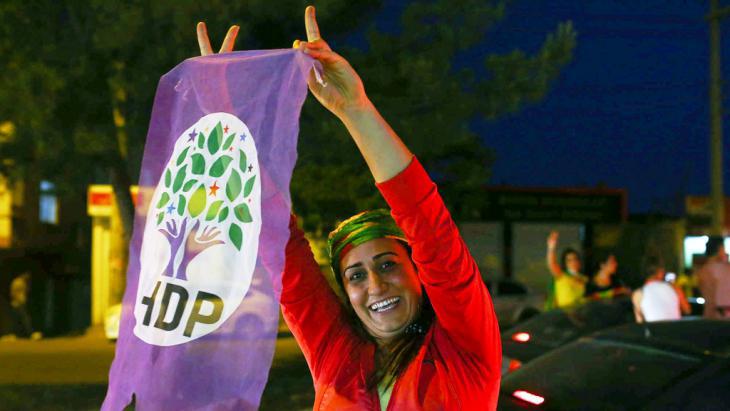 Turkey after the general election
No balcony speeches for Erdogan

The fact that a Kurd, of all people, has mounted a successful challenge to Turkish President Recep Tayyip Erdogan, is tantamount to a revolution. One thing is clear: the AKP can no longer continue deriding its critics as it has previously done. But what options are now open to the party? By Cigdem Akyol in Istanbul

When he enters the room, the journalists begin to applaud. Many try to shake his hand or simply to touch him. It is 10 p.m. on Sunday evening (7 June 2015) when Selahattin Demirtas enters the room in the Istanbul district of Beyoglu, where he is about to hold the first press conference following his election victory. Although the votes are still being counted at this point, the first official results have made it clear: the co-leader of the pro-Kurdish opposition party HDP has, for the time being, put the brakes on the power fantasies of President Recep Tayyip Erdogan. The politician, long regarded as unbeatable, has lost his absolute majority.

Demirtas carves a path through the journalists, the photographers crowd around him. When he finally makes it to the lectern, the 42-year-old looks gravely at the crowd, not a hint of a smile on his face: the election result is a "fantastic victory for peace and freedom," he says; a "dictatorship" has been brought to an end. Outside the door, some 100 HDP supporters are celebrating noisily. There is also applause from many of the journalists present. For them, this feels like a euphoric departure for Turkey.

After 13 years of single-party rule, the Islamic-conservative AKP won last Sunday's parliamentary poll with approximately 41 per cent of the vote, nine percentage points less than in 2011 and far short of the two-thirds majority it had hoped for. The second largest force was the centre-left CHP with around 25 per cent, and third the ultranationalist MHP with some 16 per cent. The HDP cleared the 10 per cent threshold, capturing 13 per cent of the vote.

The election result is a setback for the head of state, who launched a blistering attack on the HDP in recent weeks. Although as president, the constitution demands that Erdogan remain neutral, he toured the provinces campaigning for the Islamic-conservative AKP that he co-founded in 2001, waving the Koran around as though it were a party leaflet, and warning against "godless politicians" – by whom he meant Demirtas. The pro-Kurdish party ran the election on a platform of blocking Erdogan's plans to introduce a presidential system. Its gamble paid off. For the first time since 2002, the AKP must now look around for a coalition partner or form a minority government. 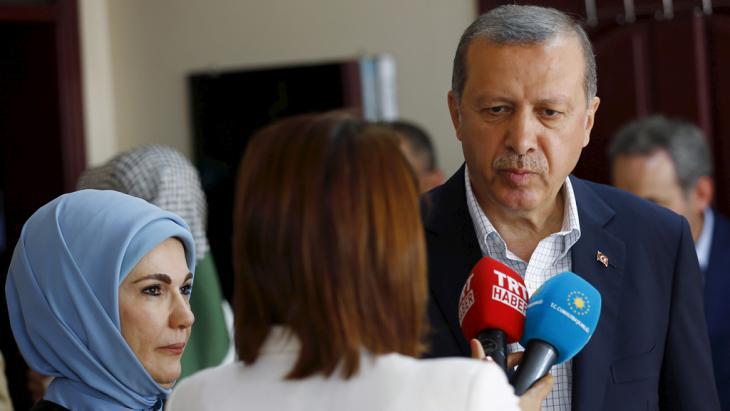 Historic result for Turkey: after the formal resignation of the prime minister and cabinet on Tuesday, President Erdogan (pictured above speaking to a reporter with his wife) will invite the AKP to form a government. Although the AKP, which has governed Turkey since 2002, won 40.8 per cent of the vote and is the largest party, it will no longer be able to rule alone unless it opts to form a minority government

"We promised our voters we would not enter a coalition with the AKP, and we will keep that promise," Demirtas said at the press conference. If no government is formed within 45 days, then it is possible that fresh elections will be called. This is not an improbable option, as Erdogan continues to cling to his dream of Turkey as a presidential republic.

The HDP's result was a surprise, says sociologist Bulent Kucuk, who had predicted a result of between nine and 11 per cent for the party. Most recently, the two explosions last Friday (5 June 2015) at an HDP campaign event in the Kurdish city of Diyarbakir rallied further support for the Kurdish party.

Many blamed the government for the attacks, which killed three people. "This can neither be proven nor ruled out," says Kucuk, who teaches at Istanbul's Bogazici University. He notes that there have been some 200 attacks on HDP offices and election campaigners in recent months. And so far, he says, little has been done to track down the perpetrators.

The Kurds' loss of faith in Erdogan

The AKP suffered its greatest losses in the Kurdish south-east of Turkey. Kucuk attributes this, among other things, to the fact that last year, the AKP stood by and did nothing when the Kurdish city of Kobani in northern Syria was overrun by IS jihadists. "People saw that the AKP did not want to help the Kurds in Rojava," says Kucuk, which is why even Kurdish supporters of the AKP voted for the HDP this time.

After the election, all three opposition party leaders were quick to offer assurances that they would on no account agree to a coalition with the AKP. But sociologist Kucuk is of the opinion that the most probable outcome is a coalition between the AKP and the MHP. Kucuk believes that the fact that the two parties have differing positions on the Kurdish question – the MHP would like to see an immediate end to the peace process with the Kurds initiated by the AKP in 2012 – is a negotiable matter. According to Kucuk, with its "Islamist, Turkish-nationalist discourse", the AKP has moved closer to the MHP in recent years. 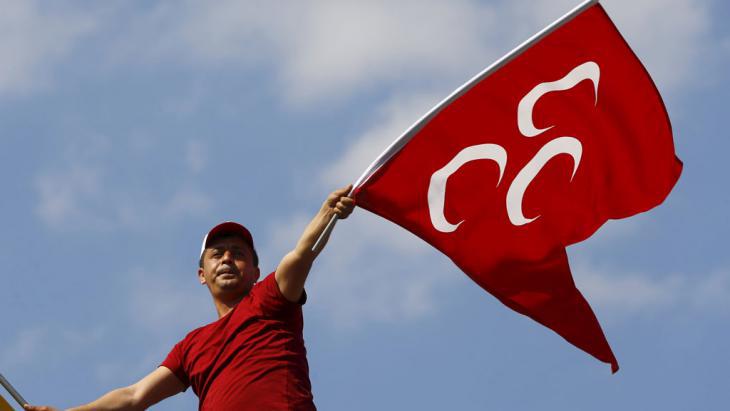 Turkey's future domestic political course will become clear in the next few weeks. For opponents of Erdogan, in any case, the head of state's downfall has already begun. "This is the end of the Erdogan era," historian Ahmet Insel told the broadcaster CNN Turk. Opposition politicians sneered that from now on, the power-conscious president must also expect questions about his own legitimacy.

AKP opponents nationwide have been celebrating since Sunday evening, and media outlets that have been bullied by Erdogan are euphoric. For example, on Monday (8 June 2015), the front page headline in the Kemalist daily "Cumhuriyet" read "There's your new Turkey!". And above a photo of the President were the words: "Turkey has turned its back". Only last week, Erdogan called for a life sentence for "Cumhuriyet" editor-in-chief Can Dundar because of the paper's anti-government reporting.

The secular newspaper "Hurriyet" was also jubilant, running the headline: "The election loser is called Erdogan". As recently as the end of May, "Hurriyet" journalists published an open letter to Erdogan criticising increasing levels of censorship in Turkey and announcing in a combative manner: "Just in case you intend to intimidate us so that we do not make use of our constitutional right to press freedom, freedom of expression and the freedom to criticise, then know this: we will fearlessly defend these freedoms."

The mood of the anti-AKP daily newspaper "Zaman" was also unmistakable following the announcement of election results: "The nation has spoken: enough is enough!". The left wing daily newspaper "Bir Gun" showed a photograph of the Gezi protests of summer 2013 with the headline: "We were on the balcony, but why didn't we see you, Daddy?" This is an allusion to Erdogan's famous balcony speeches, which he likes to give after every election victory. Only on this occasion, the president did not appear on the balcony and has remained silent.

Home
Print
Newsletter
More on this topic
Parliamentary election in Turkey: Erdogan's biggest political defeatThe role of the HDP in the Turkish general election: Beacon of hope for women and LGBTsTurkey, IS and the Kurdish conflict: "Kobani is now everywhere"Interview with Turkish politician Sirri Sureyya Onder: The solution to the Kurdish conflict as a yardstick for democracy
Related Topics
Democracy and civil society, Justice and Development party (Turkey), Kurdish-Turkish Conflict, Kurds, Recep Tayyip Erdogan, Selahattin Demirtas, Turkish opposition, Women in Turkey
All Topics

Relations between Turkey and Russia are ambivalent. Moscow is nonetheless trying to prop up the leadership in Ankara. Elections are to be held in Turkey in June – and the last ... END_OF_DOCUMENT_TOKEN_TO_BE_REPLACED

All eyes in Turkey are on a court hearing scheduled for January 30 into a child abuse case that allegedly occurred with the knowledge of one of Istanbul's most powerful Islamic ... END_OF_DOCUMENT_TOKEN_TO_BE_REPLACED

Any reconciliation between Turkey and Syria’s Assad regime would have disastrous consequences for many Syrians, explains Syria expert Kristin Helberg END_OF_DOCUMENT_TOKEN_TO_BE_REPLACED

The poetry of Pir Sultan once prompted uprisings in the Ottoman Empire. To this day, Alevis identify with him. Rainer Hermann visited Mehmet Celebi, a direct descendant of the ... END_OF_DOCUMENT_TOKEN_TO_BE_REPLACED

There are signs of an imminent normalisation of relations between Turkey and Syria. This would allow Erdogan to score political points domestically before the upcoming elections ... END_OF_DOCUMENT_TOKEN_TO_BE_REPLACED

Turkey will mark the centenary of the proclamation of the Turkish republic in October. But 2023 will be an important year in another respect too: Turks will go to the polls in ... END_OF_DOCUMENT_TOKEN_TO_BE_REPLACED
Author:
Cigdem Akyol
Date:
Mail:
Send via mail

END_OF_DOCUMENT_TOKEN_TO_BE_REPLACED
Social media
and networks
Subscribe to our
newsletter