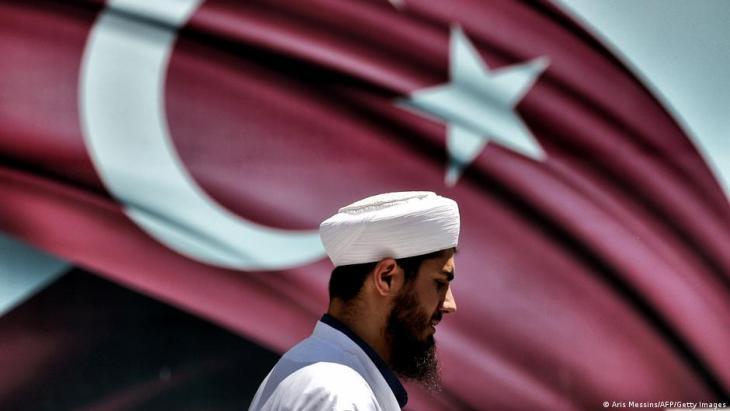 Turkey
AKP under scrutiny for ties to ultraconservative Islamic community

The ultraconservative Ismail Aga community has close links to Turkey's ruling AKP. Some are now questioning the community's influence after news reports of the forced marriage of a six-year-old girl within the group. By Burak Ünveren

"I didn't understand that it isn't normal to be married at the age of six until I looked it up on my phone," said a young woman, now 24, according to the transcript of a charge she filed with the authorities.

The woman said that when she was six years old, her father, an influential member of Turkey's Ismail Aga community, forced her into marriage with a 29-year-old man who also belongs to the same community. The child was wed to her husband in an Islamic marriage before a cleric, in a ceremony known as an "imam marriage". Such marriages aren't legally recognised in Turkey. Both practicing Muslims and secular Turks, however, perform it as a custom in addition to a civil marriage ceremony. When the girl was 18, the couple also married in a civil ceremony. They have since divorced.

The young woman's story triggered public outcry earlier this month after a journalist for BirGün, a left-wing daily newspaper, reported on the indictment, which includes pictures of the girl in her wedding dress. The man is alleged to have had sexual contact with her when she was still a child. Authorities have subsequently launched investigations against the ex-husband for "rape of a minor." 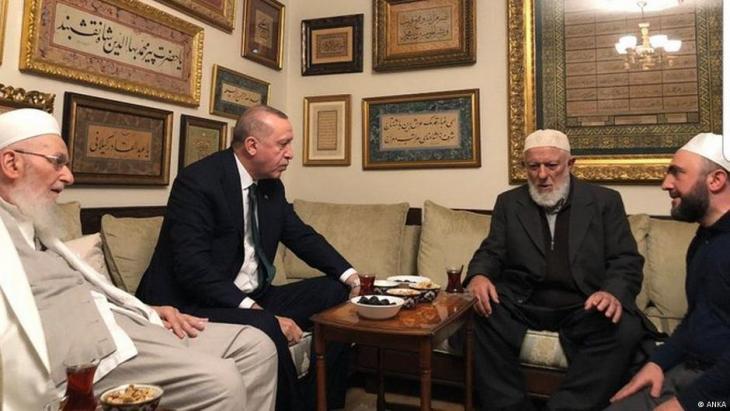 Although the Turkish public had been debating the issue for days, it took some time for the government to address it. A spokesperson for the ruling AKP eventually released a statement criticising "child abuse" in general but without mentioning the Ismail Aga community, which always supports the AKP in elections.

The Ismail Aga community is considered one of Turkey's largest Orthodox Sunni communities. The closed religious group preaches against laicism, the separation of state and religion, a principle on which the Turkish state was founded in 1923. The community has strict rules for its members: women must cover themselves, while men have to wear beards. The group supports several Islamic schools, which promote the teachings of the Koran, as well as student dormitories.

The community was founded in 1980 by Imam Mahmut Ustaosmanoglu, who headed the group for 42 years before his death earlier this year. Ustaosmanoglu had a good relationship with President Recep Tayyip Erdogan, who visited the imam several times at the community's Istanbul mosque. When the imam died in June, the president and several AKP ministers attended his funeral.

The influence of this ultraconservative community also stretches beyond Turkey. In Germany, security authorities have been keeping an eye on the group. In the south-western state of Baden-Württemberg, the community has been accused of "propagating the full validity of Sharia law."

Religious communities were banned in Turkey after the founding of the republic almost a century ago, but in recent decades some groups have begun to re-establish their presence. Until 20 years ago, before the AKP came to power, these consisted of small, not very influential radical organisations on the fringes of society. Today, they are more influential than ever. Political parties on the right, in particular, have maintained close ties with Islamist communities. 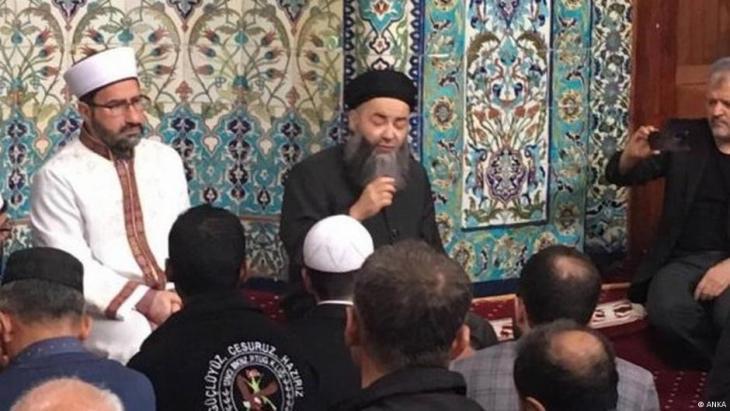 Up until the failed coup in 2016, the Gulen movement was hugely influential in Turkey. Observers have claimed that when the government dismissed over 100,000 Gulen followers from their jobs in government ministries, public administration and the judiciary after the coup, they were replaced in part by members of the Ismail Aga community. Pictured here: leading members of the Ismail Aga community

The Gulen movement was one particularly influential conservative Islamic group, as revealed after the failed coup in 2016. Erdogan accused cleric Fethullah Gulen, his former close confidant, and his followers of being responsible for the attempted coup and had them removed from public office. More than 100,000 employees were forced out of their roles at government ministries, in public administration and the judiciary.

In 2007, Ilhan Cihaner, then chief public prosecutor in the eastern city of Erzincan, investigated the community for fraud, illegal fundraising and illegally teaching preschool and elementary school-aged children. The government put a stop to his efforts and had Cihaner arrested and investigated.

"In the past, the Gulen movement controlled the economy, the bureaucracy, the judiciary and even the army – despite the fact that they represented less than 2 or 3 per cent of Turkish society," Cihaner, now a parliamentarian for the opposition Republican Peoples Party (CHP), told Deutsche Welle.

Only 4.3 per cent of all Turks have a strong connection to a religious community, according to a survey by the Metropoll polling institute. In politics, however, they play a disproportionately large role. 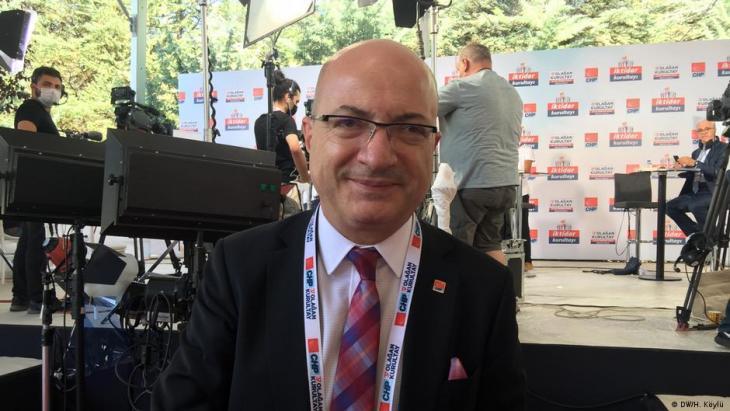 "In the past, the Gulen movement controlled the economy, the bureaucracy, the judiciary and even the army – despite the fact that they represented less than 2 or 3 per cent of Turkish society," says Ilhan Cihaner (above), former chief public prosecutor in the eastern city of Erzincan and now member of parliament for the CHP

Religious communities do a good job promoting their views and magnifying their power, says Ihsan Dagi of the Middle East Technical University in Ankara. "That increases their ability to negotiate with politicians; they negotiate at a much higher level than where they actually stand."

The Ismail Aga community is not the only ultraconservative group in the country – quite a few communities compete for influence in politics and society. "When they boast about their power," says Dagi, "they are sending rival communities the message that they are stronger than the others.  That helps them poach followers" from other groups.

Members of the Ismail Aga group have been up in arms about the report of the forced marriage of the young girl and have demanded the arrest of the journalist who brought the story to light. The woman's current condition is not publicly known. In a YouTube video, however, her brother and sisters have contradicted the accusations against her husband.

Relations between Turkey and Russia are ambivalent. Moscow is nonetheless trying to prop up the leadership in Ankara. Elections are to be held in Turkey in June – and the last ... END_OF_DOCUMENT_TOKEN_TO_BE_REPLACED

All eyes in Turkey are on a court hearing scheduled for January 30 into a child abuse case that allegedly occurred with the knowledge of one of Istanbul's most powerful Islamic ... END_OF_DOCUMENT_TOKEN_TO_BE_REPLACED

Any reconciliation between Turkey and Syria’s Assad regime would have disastrous consequences for many Syrians, explains Syria expert Kristin Helberg END_OF_DOCUMENT_TOKEN_TO_BE_REPLACED

The poetry of Pir Sultan once prompted uprisings in the Ottoman Empire. To this day, Alevis identify with him. Rainer Hermann visited Mehmet Celebi, a direct descendant of the ... END_OF_DOCUMENT_TOKEN_TO_BE_REPLACED

There are signs of an imminent normalisation of relations between Turkey and Syria. This would allow Erdogan to score political points domestically before the upcoming elections ... END_OF_DOCUMENT_TOKEN_TO_BE_REPLACED

Turkey will mark the centenary of the proclamation of the Turkish republic in October. But 2023 will be an important year in another respect too: Turks will go to the polls in ... END_OF_DOCUMENT_TOKEN_TO_BE_REPLACED
Author:
Burak Ünveren
Date:
Mail:
Send via mail

END_OF_DOCUMENT_TOKEN_TO_BE_REPLACED
Social media
and networks
Subscribe to our
newsletter