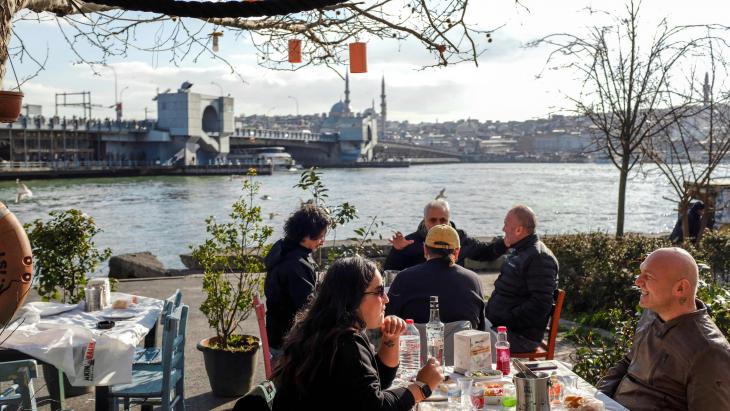 In a waterfront Istanbul neighbourhood that once buzzed with cafe and pub life, there are now only empty tables after nearly 50 percent tax hikes on alcohol.

The tax is one of the biggest blows to alcohol consumption by a government often accused by its opponents of eroding the pillars of modern Turkey, an overwhelmingly Muslim nation but an officially secular state.

The blow has been felt particularly hard in the Besiktas neighbourhood on the European side of the Bosphorus.

Suleyman Gunes expressed frustration as he searched for customers during an evening rush hour this week outside the pub where he works.

"Customers stand up and leave soon after they see the prices on the menu," Gunes said.

Besiktas is one of the most popular and vibrant Istanbul quarters, with its universities, well-known football club, and young population, as well as many cafes and bars.

"How can you expect a man to give half of his daily money to a pint of beer?"

In January, the Turkish government announced an increase in special consumption tax on alcoholic drinks and tobacco products by 47.4 percent.

In 2013, his government passed a law restricting the hours for alcohol sales and during the Covid-19 lockdown last year, it introduced further curbs to sales.

He himself has often advised Turks to drink "ayran" made from yogurt instead of the national alcoholic drink flavoured with aniseed, raki.

The latest tariffs increase prices for individuals, bars and restaurants that have been struggling with inflation and high rents as well as restrictions during the pandemic -- though less than in many other countries.

Some bartenders told journalists they witnessed customers sharing one bottle of beer, and some others staying in the bar for hours after ordering only a glass of wine.

When Erdogan's conservative AKP came to power in 2002, a 70cl bottle of raki cost 8 Turkish liras.

Meanwhile, nearly 50 percent inflation and soaring food and energy prices have eroded Turks' purchasing power despite a wage rise of 30 to 50 percent for many public and private sector employees.

With the latest measures on alcohol, many liquor stores are at risk of closing, while some people have started producing home-made alcohol.

"Alcohol was already expensive. The latest hikes have poured fuel on the fire," said Cihan Ince, an Istanbul tekel (or liquor) shop owner.

Ozgur Aybas, head and founder of Turkey's Tekel Stores Platform, said the price hikes on alcoholic beverages amounted to a "fine slapped by a tiny minority on a happy majority, the catering culture, the private and secular lives".

He said: "This is an ideological approach, a punishment with tax and a sanction saying 'live like us'."

Seref Binay, who runs a tekel on the Asian side of Istanbul, said half of his clients were producing alcohol at home.

Drinkers "are becoming chemists," he quipped.

He said YouTube videos already show how to make alcohol at home but warned: "The moment you put methyl instead of ethyl, you become blind."

Istanbul police on Monday confiscated thousands of bootleg bottles and detained four suspects during one raid.

Turkish media reported 84 people died of bootleg alcohol in December alone, before the prices shot up.

On his YouTube channel sitting at a table in front of a big bowl of green grapes, a Turkish man using the alias of Vedat3858 Bilgin tells his more than 1,300 subscribers how to make raki.

"It is much cheaper. I have my own measures and recipes. A five litre raki costs 100 lira (12 euros)," Bilgin, who refused to share his real name, said in a phone interview.

Some stores are resorting to creative ways to promote sales with lively Instagram accounts and live bands inside small shops.

Batu, a shopper in his 20s, said: "Drinking in a bar is becoming a dream for us. Freedoms are being curbed and we stay quiet. What else can I say?"

Back in Besiktas, Gunes warned the high prices will doom the alcohol business.

END_OF_DOCUMENT_TOKEN_TO_BE_REPLACED
Social media
and networks
Subscribe to our
newsletter