Turkey and Armenia
"This Is None of Europe's Business"

The Armenian Genocide has increasingly become a factor in Turkey's EU accession talks. In Turkey, even high-ranking officials say the EU position is a typical attack of Western arrogance on Turkish national pride and honour. Dorian Jones reports 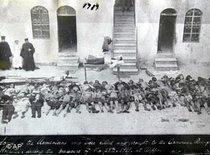 ​​Istanbul's 20,000 or so Armenian community is the last remnant of what 90 years ago numbered more than a million. What happened between 1915 to 1916 continues to haunt both Turkey and Armenia, according to late Ottoman historian Prof. Selim Deringil of Istanbul's Bosporus University.

"In many ways the wounds of the past haven't healed," Deringil explains. "The Armenian official position is that up to 1.5 million Armenians were massacred or, in some way or other, were removed from their home. The Turkish official position is that there was, in fact, a civil war in which the Armenians sided with the Turkish enemy Russia and sort of acted as a fifth column for the Russians. And theses two official camps, these two official views are not in a state of dialogue."

The fear of a flood of compensation claims

Last year a meeting in Vienna between Armenian and Turkish historians to resolve the dispute, broke down in recriminations with both sides blaming the other for its failure. But it is more than just a historical dispute.

Ankara fears any recognition of a genocide could open the flood gates to a wave of compensation claims against Turkey, including some of the country's leading companies which have been accused of benefiting from the killings.

At a recent international Greens conference held at the European Parliament in Strasburg, a German delegate called on Turkey to recognize its committed genocide against its Armenian population. Increasing number of voices within the EU are joining a growing chorus, with some even demanding it be made a precondition of any membership talks.

"This is none of Europe's business"

But in Turkey such calls touch a raw nerve even among human rights activists. Murat Belge, head of the Turkish section of the International Human Rights Group Helsinki, argues the issue is none of Europe's business.

"When you come to us with the Armenian question that question (…) then the conservative right here will have the right or the opportunity to say, 'See how they are behaving towards us? See how thy are making it impossible to give up this idea etc.?'"

"And we know what western and European arrogance is and can be," Belge continues. "It is not up to the Europeans to come and tell us about the Armenian genocide. We know about it, too. It is our business, not yours to struggle to make this public knowledge."

Just how highly charged the issue is, becomes clear during a TV talk show discussing calls for turkey to recognize the Armenian genocide. Here, the debate quickly degenerated into an angry diatribe against Europe.

"Decisions are against Turkish dignity"

According to a Turkish diplomatic source, opposing the genocide charges is a priority Turkish foreign policy. Former foreign Minster Coskun Kirca says the issue is more than just historical dispute, for Turks, he argues, it's about honour and pride, something very important for his country.

"This is not true. A genocide is a serial murder organized by a government, which is not the case. And it is mutual: Muslims have massacred Armenians and Armenians have massacred Muslims. So why should Turkey accept something which is not true? Historically, as a fact, it is not true. All these declarations and decisions are against Turkish dignity and this is something very important. Why are Turks so keen about their dignity? This is a problem not understood in the West," Kirca asserts.

"And we are going to stay like that for many years," Kirca predicts. "We are not enough individualist, we have not enough turned to prosperity (the West tells us). There are other values which are just as important as prosperity for Turks! We are not going to accept decisions or proclamations which are not true, and because they are not true they are attacks on our dignity."

At a cultural evening of local Armenians in Istanbul, the community appears anxious to look to the future but not forgetting their past. For its spiritual leader, Patriarch Mesrob Moutifian, stresses that the dispute is an issue to be resolved by Turks and Armenians.

"I myself was born in Istanbul and one could not really divide oneself between Armenia and Turkey," Moutifian tells us.

"It's sort of together. So any time turkey has a problem as a country, I feel a part of it. But sometimes there is bitterness coming from history – bitterness, problems which have not been created by our generations. I think then as people of this generation especially we have a duty not to forget the past but to create new future."

Turkey's surviving Armenian community is set to be caught in the crossfire as the Armenian Diaspora intensifies its efforts to secure international recognition of the genocide. Turkey is already preparing to fight those attempts, the historical controversy is rapidly developing into a present-day bitter political fight.

In such an atmosphere reconciliation will be difficult.

The Armenian Genocide
The Search for Truth and the Historical Context
Questions about the young Turkish Republic and the Armenians are still causing waves ninety years later. Now historians who are trying to reconstruct the historical context are increasingly being paid heed. Jürgen Gottschlich reports

Row over Book Burning in Turkey
Reactionary Forces Try to Create National Hysteria
Turkish nationalists see their country's liberalization and its moves toward joining the EU as a betrayal. They are joining forces against those they hold responsible for the eclipse of Kemal's legacy, including writers. By Ömer Erzeren

END_OF_DOCUMENT_TOKEN_TO_BE_REPLACED
Social media
and networks
Subscribe to our
newsletter