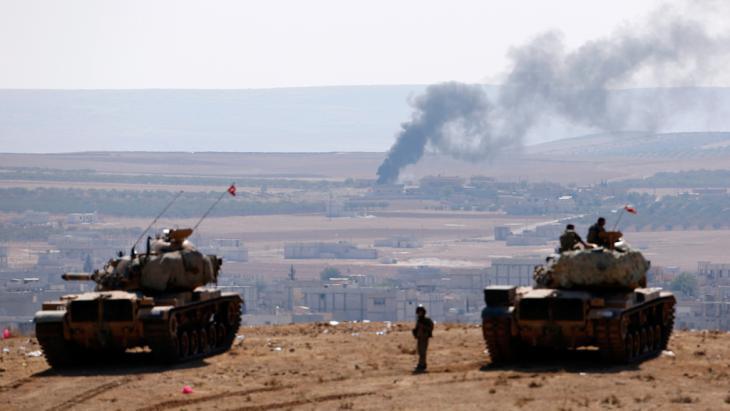 Turkey and the alliance against IS

Of inaction and double standards

In recent days, there have been a lot of reports about the Kurds' determined battle against the terrorist group Islamic State in Kobani, northern Syria. In this context, Turkey has frequently been accused of "inaction". Why? An essay by Cemal Karakas

In the last few days, particularly in Germany, politicians of almost every stripe have appeared on various talk shows and in the media, loudly accusing Turkey of "failure to render assistance" and of ignoring the humanitarian suffering of the Kurds and the upholding of democratic and human rights standards.

Cynically, the accusation has also come from those politicians who drew a veil of silence over questions of democracy and human rights during the Chinese president's most recent visit to Germany, for fear of endangering German economic interests.

From the Turkish side, in turn, comes the accusation of "double standards" – and quite rightly, since Turkey has just as much right to pursue its national interests as Germany does. In addition to this, Germany is not immediately affected by the conflict in Syria, and – in comparison to Turkey – has taken in far fewer refugees. To date, Turkey has accepted over 1.5 million refugees from Syria and Iraq, paying out more than US$3.5 billion for their medical care and accommodation.

A moral duty to intervene?

No question: with the exception of the USA's isolated air strikes and the weapons provided by the international anti-IS alliance, the Kurds in Kobani and elsewhere in Syria and Iraq have been left to fend for themselves many times over in their fight against IS. But does this mean that the West, and in particular Turkey as a directly affected partner in the Western security coalition, has a moral duty to intervene directly in the conflict, i.e. by deploying ground troops? I don't think so.

The former German Chancellor Helmut Schmidt once came up with the clever principle that outside intervention in a conflict should only happen when Country A invades Country B. On the other hand, when the conflict takes the form of a civil war or takes place between elements of a single society (i.e. within a single country) then it is a matter for that country alone, and outside intervention is unnecessary. 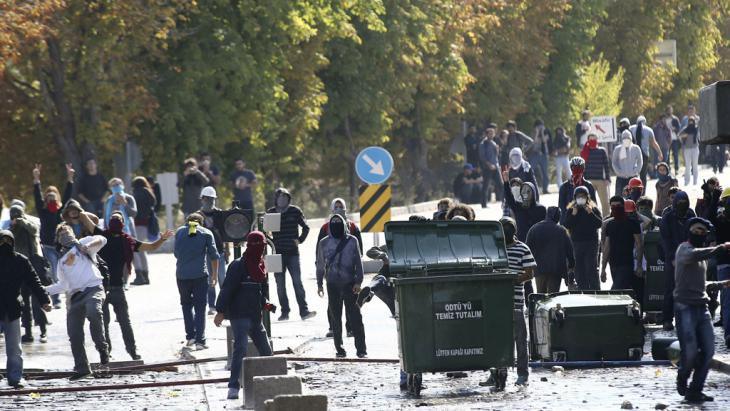 Kurdish demonstrators in Ankara throw projectiles at police units. According to Cemal Karakas, Ankara is reluctant to get involved in Kobani because it would run the risk of sliding into a war on two fronts, fighting both the PKK and IS. This, he says, could impact negatively on the peace in Turkish society and on tourism – the latter being the main reason why the majority of people in Turkey is against an intervention in Syria or Iraq

In times of asymmetrical war, where a terrorist organisation attacks Country B from inside Country A, the matter is rather more complicated. When al-Qaida attacked the USA on 11 September 2001, the Taliban and the terror network in Afghanistan were attacked in return – with a UN mandate, it must be said. What is the situation now with IS? It may have become a serious threat to Iraq and the Assad regime, but at the same time, it has been smart enough not to attack any major (Western) powers.

Nevertheless, there is the expectation that Turkey should now break international law and intervene militarily in a conflict that lies beyond its own borders. Ironically, Ankara is now coming under pressure from those self-same countries (namely Germany and the USA) that have in the past always been critical when Turkey has gone into its neighbouring region to fight the Kurdish underground organisation PKK.

The danger of a war on two fronts

But it is Turkey's right to decide for itself if and when it would be advisable to take direct action in Kobani or not. Unlike most of its Western alliance partners, Ankara would be in danger of fighting a (civil) war on two fronts, against the Kurdish PKK as well as the radical Islamist IS. This could have a negative impact on the peace within Turkish society and on tourism in the country – and it is common knowledge that tourism is an important source of revenue. This is the principal reason why the majority of the Turkish population is against a (ground) war or an intervention in Syria or Iraq.

Following the kidnapping and release of Turkish consular workers by IS, the Turkish parliament agreed to combat missions being carried out beyond its borders and the use of Turkish military bases for its NATO allies. Ankara has learned from its previous mistake in 2003, when it kept out of the American intervention in Iraq to topple the Saddam regime. The reason being that only the parties involved get to decide what happens later, during the "nation- and state-building" phase, in the affected country, and everyone knows that the founding of an independent Kurdistan would not be in Turkey's interests.

However, Ankara is right to insist on a buffer and no-fly zone to protect the refugees and the Turkish border. Paradoxically, there is no majority in favour of this on the side of the US and the other anti-IS allies. Moreover, the Kurds themselves are against a military intervention by Turkey, concerned that Ankara could exploit a potential buffer zone, using military force to combat Kurdish efforts towards independence or autonomy in Syria and Iraq.

Years of accepting IS 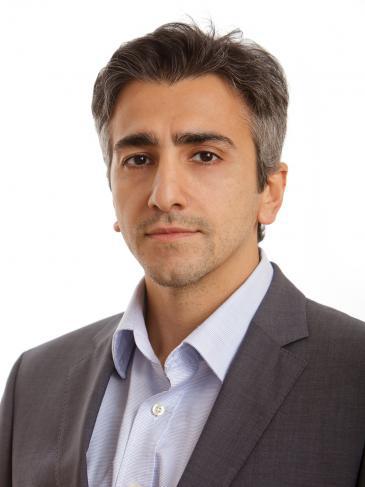 Dr Cemal Karakas is a political scientist who works for the Peace Research Institute Frankfurt (PRIF). He specialises in the following areas: Turkey, political Islam, European integration and fostering democracy in theory and practice

Of course Turkey is not entirely innocent. The fact that it has for years tolerated IS, which it sees as an important agent in the toppling of the Assad regime and which, as a result, has been able to collect weapons, currency and personnel from Turkish soil largely unhindered, has put a dent in the reputation of the AKP government.

In this context, the German government accuses the AKP government of not conducting adequate identity and border checks on Turkish Islamists with German passports who are leaving Turkey for Syria. Turkey in turn accuses Germany of failing to prevent Muslims drifting towards extremism and failing to integrate Muslims into German society. The pro-Kobani and pro-IS demonstrations have also put increasing strain on German-Turkish relations. In both Germany and Turkey, there have been violent clashes between Kurds and Islamists.

It is alarming that in its lax approach to IS, the AKP government has accepted the politicisation and polarisation of the country's own Kurdish minority, with the result that 40 people died in the most recent demonstrations in Turkey. But it should have become clear even to the AKP government – at the very latest, when Turkish citizens were kidnapped by IS – that my enemy's enemy is not necessarily my friend.

So how should Kobani be dealt with? For one thing, Kobani has become strategically important for IS, since it can acquire weapons, members and money there through the border trade with Turkey. For another, the town is important symbolically: by resisting or by taking Kobani, IS can show the world that it can withstand the aerial attacks of the largest military power on the planet.

Turkey should not intervene proactively in the Syrian conflict. Nor should it treat the Kurds worse than IS, which is to say that Ankara should – in the case of the German army, for example – allow allied nations to use ground routes through Turkey to supply the Kurdish fighters and refugees with aid and weapons.

For an international military presence with a UN mandate

Intervention or the dispatch of Turkish ground troops alone would not be constructive. A more suitable response would be an international military presence with a UN mandate, like the ISAF deployment in Afghanistan.

Following the most recent periods of turmoil in Syria and Egypt, the realisation has gradually dawned – even in the West – that dictators with functioning states are a better guarantee of order and stability (and minority rights) than societies that are undergoing a transformation, where democratic elections have legally put undemocratic forces – like (radical) Islamists – in government, bringing instability and chaos (as well as a restriction of rights for non-Muslims).

Of course, this does not mean that the West and the authoritarian UN veto powers Russia and China will in future share the same set of values. But Moscow and Beijing, which are themselves fighting Islamist terrorism, could become important allies for the West in a UN-mandated fight against IS.

Home
Print
Newsletter
More on this topic
Turkey, IS and the Kurdish conflict: "Kobani is now everywhere"Turkey, IS and the Kurds: Powder keg on the Turkish-Syrian borderSyrian refugees in Turkey: Time for Turkey's allies to rally round
Related Topics
'Islamic State' | IS, Islam and the West, Justice and Development party (Turkey), Kurdish-Turkish Conflict, Kurds, Recep Tayyip Erdogan, United Nations (UN)
All Topics

In "Sprache und Sein" (Language and Being) the activist Kubra Gumusay critically examines the function of language – the narratives that reflect and determine the realities of ... END_OF_DOCUMENT_TOKEN_TO_BE_REPLACED

Award-winning Indian author Rahman Abbas spent time in Europe last year researching "the Holocaust and the future of minorities in India and Pakistan". To mark VE Day on 8 May, he ... END_OF_DOCUMENT_TOKEN_TO_BE_REPLACED

A muezzin call to prayer via loudspeaker is legally permissible in principle, but various basic rights and interests must be considered, explains professor of law Mathias Rohe in ... END_OF_DOCUMENT_TOKEN_TO_BE_REPLACED

Repression and despotism takes many forms. Yet as varied as these phenomena are, they all share a common core, argues Tarek Azizeh. Revolutions accompanying the struggle for ... END_OF_DOCUMENT_TOKEN_TO_BE_REPLACED

For the first time anywhere, Syrian intelligence officers are facing trial – in Germany. The court aims to probe the defendant's alleged crimes, as well as cast light on Bashar al ... END_OF_DOCUMENT_TOKEN_TO_BE_REPLACED

The refugee crisis on Turkey's borders can only be resolved with a new EU deal. It should build on the current plan, but avoid its flaws, writes Ozgur Unluhisarcikli of the German ... END_OF_DOCUMENT_TOKEN_TO_BE_REPLACED
Author:
Cemal Karakas
Date:
Mail:
Send via mail

END_OF_DOCUMENT_TOKEN_TO_BE_REPLACED
Social media
and networks
Subscribe to our
newsletter