Skip to main content
Turkey and the Arab World

Turkey is not wavering in the slightest from its pro-European course. Nevertheless, as a trading nation with a dynamic economy that is the living proof of the fact that Islam, a secular political landscape and a parliamentary democracy are indeed compatible, it has in recent times rediscovered its Arab neighbours. Rainer Hermann reports 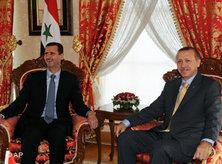 One of the success stories of Turkey's new foreign policy is Syria. In 1998, the two neighbours stood on the brink of war. Today, their economic and political ties are close

​​ There was one good thing about Iranian President Mahmoud Ahmadinejad's recent visit to Lebanon: although it increased tension prior to the publication of the indictment by the special international tribunal into the murder of Rafiq Hariri, it also demonstrated that in the Arab world, Iran can now really only be sure of the support of Shiites. In Beirut and during his trip to South Lebanon, Ahmadinejad was almost exclusively cheered on by Shiites; Sunni Muslims in the Arab world, on the other hand, viewed his visit to Lebanon with considerable disquiet.

There are many reasons why Iran's influence in the Arab world has passed its zenith. One of them is the circumstances that surrounded Ahmadinejad's re-election in June 2009 and the bloody crackdown on protests. Another is the growing influence of Turkey.

Last July, Khalil Shikaki's Palestinian Center for Policy and Survey Research discovered that 43 percent of all Palestinians consider Turkey to be their most important foreign policy ally, ahead of Egypt at 13 percent and Iran at only 6 percent. Support for Turkey in the West Bank and in Gaza is virtually the same.

In Lebanon, Ahmadinejad did not succeed in reversing this trend. Shortly before his arrival in Beirut, the Turkish prime minister, Recep Tayyip Erdogan, was back in Damascus for another meeting with President Bashar al-Assad. In the race for the post of prime minister in Iraq, both these men support the secular Shiite Iyad Allawi, while the powers that be in Iran prefer Nouri Maliki.

In addition to the matter of Iran, Erdogan and Assad spoke about opportunities for reviving the peace process. Assad made it clear that indirect talks with Israel could only be restarted if Turkey were to act as mediator.

Turkey is a "success story" in the Middle East

Up until ten years ago, Turkey was not a player in the Middle East, despite the fact that it shares borders with Syria, Iraq and Iran. It was a quiet neighbour. Today, the state that succeeded the Ottoman Empire is a popular go-between and trading partner. For the states and societies of the Middle East, Turkey – with its dynamic economy and practical evidence that Islam, a secular political landscape and parliamentary democracy are indeed compatible – is a "success story"; it has become a "soft power".

Up until ten years ago, Turkey was not a player in the Middle East, despite the fact that it shares borders with Syria, Iraq and Iran. Today, the state that succeeded the Ottoman Empire is a popular go-between and trading partner, writes Rainer Hermann

​​ There are heated debates in the West as to whether Turkey is currently just rediscovering the Middle East or whether it is actually returning to it and – if this is indeed the case – whether it is abandoning its foreign policy orientation towards the West. These questions were recently addressed at a conference in Istanbul organised by the Sabanci University, the German Institute for International and Security Affairs and the Robert Bosch Foundation.

One of the conclusions reached at the event was that although Turkey has adopted a new, active foreign policy, it has not abandoned its pro-European, pro-Western course. Nor has it shifted the main lines of its foreign policy. The policy of opening up towards its neighbours in the Middle East is much more a matter of diversifying its diplomacy and increasing prosperity in Turkey by tapping into new sales markets.

Turkey's former foreign policy was based on security considerations and the priority of territorial integrity. Its new foreign policy, on the other hand, is in the service of Turkey the trading nation and seeks to guarantee security and safeguard borders by increasing prosperity. Sükrü Elekdag, one of the best-known ambassadors in the country's old diplomatic guard, often liked to say that Turkey always had to be ready for "two-and-a-half wars", i.e. wars against Greece, Syria and the PKK. 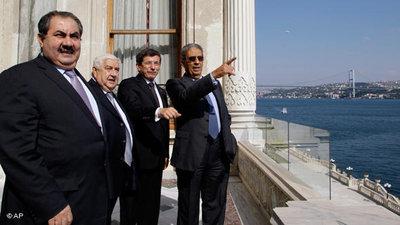 New diplomacy: Turkey's current foreign minister, Ahmet Davutoglu, has formulated a "policy of no problems" towards all neighbours, the aim of which is to maximize cross-border trade

​​In sharp contrast to this, Turkey's current foreign minister, Ahmet Davutoglu, has formulated a "policy of no problems" towards all neighbours, the aim of which is to maximize cross-border trade. With the exception of Armenia, this policy has worked so far.

Turkish foreign policy is more than just classic diplomacy, it is trade policy. It is above all Turkey's new, up-and-coming middle class – the backbone of the ruling AKP – that is benefitting from the new, economy-based foreign policy of Turkey the trading nation.

The industrial cities of Anatolia, which have been dubbed the "Anatolian tigers", are eyeing as yet unexploited market opportunities in neighbouring countries. While their entrepreneurs are also trading with Europe, they are increasingly focussing their efforts on the Middle East because of Europe's restrictive Schengen visa policy, which also hits entrepreneurs and investors. This is why they support the visa-free zone which Turkey has established with Syria, Lebanon and Jordan.

One of the success stories of Turkey's new foreign policy is Syria. In 1998, the two neighbours stood on the brink of war. Today, their economic and political ties are close. The Turkish-Syrian rapprochement went hand in hand with a cooling of relations with Israel. This process had already begun under Erdogan's predecessor, the left-wing nationalist Bülent Ecevit, who accused Israel of "genocide" against the Palestinians. That being said, Erdogan visited Israel as recently as 2005; two years later, Israeli President Shimon Peres addressed the Turkish parliament. 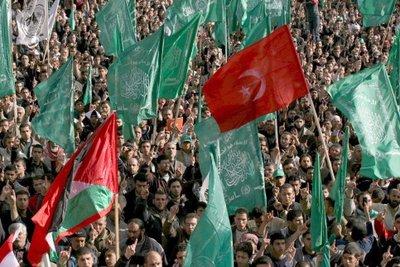 Khalil Shikaki's Palestinian Center for Policy and Survey Research discovered that 43 percent of all Palestinians consider Turkey to be their most important foreign policy ally, ahead of Egypt at 13 percent and Iran at only 6 percent. Pictured: a Turkish national flag at a Hamas rally

​​Turkey's policy towards Israel and the Palestinians is very different to that of the EU. While both advocate a peaceful resolution to the conflict and a two-state solution, they are talking to different players. Turkey accuses European diplomacy of ignoring reality because it is only talking to Fatah and boycotting Hamas. The Turkish reasoning is that there cannot be a peaceful solution without the involvement of Hamas. This is why Turkey is trying to pull Hamas into the political "mainstream".

The differences of opinion between Turkey and the West are particularly blatant when it comes to Iran. While the West is toughening its sanctions against Iran, Turkey is developing its trade with the Islamic Republic. 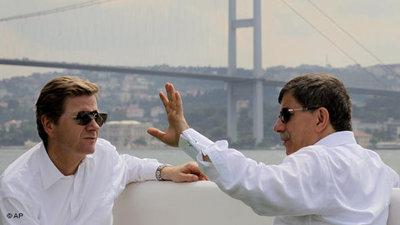 Although Turkey has adopted a new, active foreign policy, it has not abandoned its pro-European, pro-Western course - that is the conclusion reached at at a conference in Istanbul organised by the Sabanci University, the German Institute for International and Security Affairs and the Robert Bosch Foundation. Pictured: the Foreign Ministers of Germany and Turkey, Guido Westerwelle and ahmet Davutoglu

​​Last June, Turkey voted against harsher sanctions in the UN Security Council. Unlike the West, Turkey believes that the only way to normalise Iran is to normalise relations, which involves trade and diplomacy. Turkey is familiar with the kind of bazaar mentality that is needed for negotiations with Iran. For fear of destabilizing the region, neither the Ottoman Empire nor the Turkish Republic has ever supported rebellions in Iran. For centuries, the safeguarding of a regional balance of power has been more important than the pursuance of a foreign policy based on ideology. This is why Turkey's sympathy with the dissident "green" movement is only modest.

Just like the EU, Turkey only plays a secondary role in the Middle East behind the United States. At the end of the Cold War, however, it correctly identified the shifting of the tectonic plates in world politics and now, as a modern, self-confident, trading nation, wants to grasp the opportunities that are arising. Turkey still has its sights set on Europe. But the door to Europe remains locked and so this newly self-confident nation is pursuing its own interests in the Middle East and elsewhere.

END_OF_DOCUMENT_TOKEN_TO_BE_REPLACED
Social media
and networks
Subscribe to our
newsletter