Skip to main content
Turkey and the Gaza Flotilla Conflict

An Opportunity for Erdogan

The Turkish Prime Minister rages against Israel – instead of making his mark as a broker for peace, Kai Strittmatter writes in his commentary

Erdogan is no Islamist, but he now must prepare for an increase in accusations of this nature, writes Kai Strittmatter

​​ A pause for breath would be helpful at this point, a moment of moderation. Turkish anger at the killing of nine aid activists by Israeli soldiers is understandable. But Ankara should however switch its rhetoric down a gear. Prime Minister Tayyip Erdogan must be careful not to step onto the trap that is opening up in front of him. He is riding a wave of nationalistic outrage, and must not help it gather any more strength.

hat may well run counter to Erdogan's instincts, a man who not only feels morally justified in his rage against the "state terrorists" in Tel Aviv, but who is also enough of a strategist to throw to the electorate exactly the kind of slogans they yearn for. Nevertheless, it would be in his own interests to restrain himself.

A gifted populist and a merciless pragmatist

Since Erdogan's harsh criticism of Israel's invasion of Gaza in early 2009, the response of those criticized is to try and paint Erdogan's government as an Islamist threat. This is a propaganda war, calculated scaremongering, and a distortion of reality: Erdogan is no Islamist, he is a gifted populist and a merciless pragmatist. Erdogan's criticism of the Israeli policy approach to the Palestinian question is the only issue to strike a resonant chord across the board in Turkey. And while this has nothing to do with an alleged Islamisation of Turkey, Erdogan and the entire country must prepare for an increase in accusations of this nature. 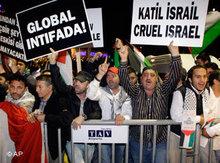 Friends and family members of Turkish activists who were deported by Israel at Ataturk Airport in Istanbul. Erdogan ought to be doing the opposite of what Turkish public anger is currently demanding, says Strittmatter

​​ One section of the population is currently basking in the approval being directed at the nation from the Arab world: Turkey, fighter for a just cause; Erdogan, hero of the Palestinians. Some already view Turkey as "the new older brother" in the region. But exultant voices such as these could soon fall silent should the predictions of some become a reality: that through the Israeli attack, Turkey is no longer just an observer and mediator, but that it has become "party" to the conflict.

That would however be fatal. Turkey's great strength up to now, for the United States and the European Union, has lain in its neutrality, and the fact that it maintained contacts with both Palestinians and Israelis.

Following Hamas' election victory in the Gaza Strip, Erdogan has insisted to the West that there can be no solution without negotiations with Hamas. He has incurred plenty of wrath for this view, but he is right. Turkey now has a chance to prove this. If Turkey's prestige among Palestinians has indeed been enhanced by the unfortunate events of the past week – then Ankara should now move to utilise its influence and at last force Hamas to make the concessions that Israel rightfully demands: recognition of its right to exist, and a halt to rocket attacks.

This might be the opposite of what Turkish public anger is currently demanding – but it would represent a significant step towards establishing Turkey's position as a key regional power for the future.

Erdogan Scandal in Davos
From Walkout to Wipe Out
Turkey's prime minister Erdogan walked out of the World Economic Forum in Davos in an argument over the Israeli military operation in Gaza – and received a hero's welcome back home. A cheap triumph that could cost him and his country dearly, writes Kai Strittmatter

Sixty Years of Turkish-Israeli Relations
Partnership in the Shadow of a Threat
Turkey and Israel mark the sixtieth anniversary of their diplomatic relations this year. Theirs has been a fruitful if conflict-ridden relationship. But there has been more than just the desire to make peace between the Israelis and the Arabs. Jan Felix Engelhardt looks back at the start of the relationship

Interview with Turkey's Foreign Minister Ahmet Davutoğlu
"Turkey Creates Balance in the Middle East
Turkey's foreign policy has been under the spotlight in recent months, with many Western commentators expressing concern about a perceived swing toward a more Middle Eastern orientation. Foreign Minister Ahmet Davutoğlu speaks to Ayşe Karabat about his country's new regional role