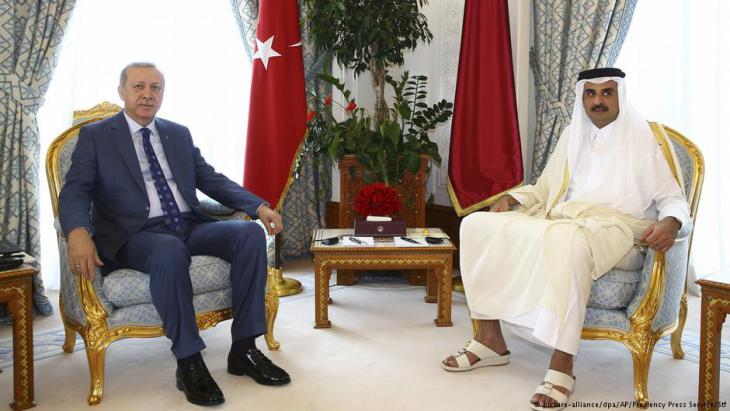 Turkey and the Gulf states

Recep Tayyip Erdogan: Sticking his neck out for Qatar

Ankara′s unilateral siding with the Emirate of Qatar in the Gulf crisis is giving rise to fears that the Turkish President is gambling away his role as a credible mediator in this key region, writes Aziz Bouabe

Ever since the AKP assumed power in Turkey in November 2002, the relationship between Ankara and the members of the Gulf Cooperation Council has fluctuated between co-operation and isolation. The reason for this is Turkey′s political ambition to reunite the Islamic world, or the Sunni part of it at least.

This new Turkish foreign policy approach can claim some success. But it has also caused considerable collateral damage due to the perpetual rivalries of "enemy brothers" in the Gulf states. Also, the fact that in the current conflict, Erdogan has unequivocally sided with Qatar, means that he accepts political disharmony with friendly nations such as Saudi Arabia and recently, the UAE. The move also acutely jeopardises his mediation role in the region to date.

Turkey is an important nation. A link between the West and everything that lies beyond the Mediterranean and the Middle East. It plays an active role within regional power structures, a role that has been largely uncoupled from the international context and balance of power. Moreover, recent developments in the tensions between the Gulf States and even in the Syrian conflict show that regional actors have vastly increased their share of influence.

Until the Qatar crisis, Riyadh and the United Arab Emirates were keen to demonstrate their efforts at normalising relations with Ankara. This is also evident within the military sector. Turkey is the sixth-largest arms supplier to the UAE, ahead of Russia and Germany. 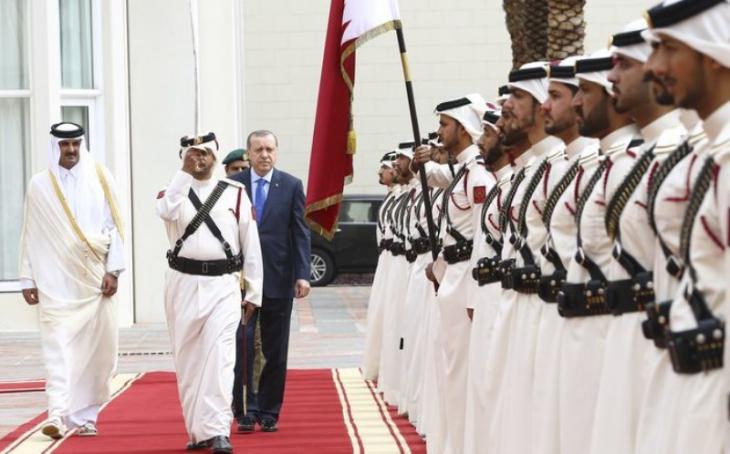 In solidarity with Qatar: fielding a military base on Qatari soil that can accommodate 3000 troops, Turkey is one of Qatar′s closest allies. Turkey has also been outspoken in its criticism of the alliance of Gulf states that have closed ranks against the emirate. At the beginning of June, Saudi Arabia, the UAE, Bahrain and Egypt broke off diplomatic relations with Qatar, accusing it of supporting extremists and allying itself with Iran. Qatar rejected the accusations. Since the start of the blockade, Turkey has assisted the regime in Doha, delivering consignments of foodstuffs to the beleaguered emirate

The geographical distribution is of particular interest here: 86 percent of the trade volume with the Gulf states is with the UAE. In 2016, Turkey exported products and services worth 5.4 billion to the United Arab Emirates; the export volume to Saudi Arabia amounted to 3.1 billion, while exports to Qatar did not exceed the half-billion mark. This means in contrast to Qatar, the UAE and Saudi Arabia are among the largest buyer nations for Turkish exports.

In the light of such figures, the question arises as to whether it is shrewd for Ankara to adopt such a clear stance in this conflict – which goes as far as its military presence in the region and joint manoeuvres with Qatar. With this approach, Erdogan is gambling away his role as credible mediator in the region.

It could be said that Turkish foreign policy should have a major vested interest in maintaining stability and the balance of power on the Persian Gulf. Erdogan should therefore be interested in an active mediation role in this conflict. Systematically improving economic relations with all parties to the conflict would ensure the optimum conditions for this to happen. After all, Turkey is only likely to retain its current "charisma in the Islamic world" in the long-term if economic prosperity is expanded and political stability secured.

By siding with Qatar, Erdogan is making a highly risky move. From a foreign policy standpoint, Turkey currently finds itself in a difficult position, with few allies. Relations with Europe are sub-optimal, to put it mildly.

If Erdogan′s ambitions for Turkey to become the leading Sunni power in the region are to bear fruit, he needs to play a decisive role in settling what is by far the most dangerous crisis ever to have threatened the Gulf Cooperation Council. Only then will Turkey stand a chance of being recognised within the region as a major Sunni player.

Philosopher Juergen Habermas was due to be awarded a major Arab prize in Abu Dhabi, but has turned it down following criticism. This decision torpedoes Arab efforts at a ... END_OF_DOCUMENT_TOKEN_TO_BE_REPLACED

In his book "Ground Zero: 9/11 und die Geburt der Gegenwart" (Ground Zero: 9/11 and the Birth of the Present) Islamic scholar Stefan Weidner analyses the consequences of the ... END_OF_DOCUMENT_TOKEN_TO_BE_REPLACED

As Qatar prepares to host the 2022 FIFA World Cup, the country has come under fire for its treatment of migrant workers, with some nations calling for a boycott of the contest. ... END_OF_DOCUMENT_TOKEN_TO_BE_REPLACED

German Middle East analyst Guido Steinberg and television journalist Ulrich Tilgner have both published new books on the conflicts in the Middle East. Their analyses and their ... END_OF_DOCUMENT_TOKEN_TO_BE_REPLACED

Televised Turkish dramas are all the rage in the Middle East. A young Ottoman TV Empire has been expanding its soft power by harnessing regional dialects, Arabic names and viewers ... END_OF_DOCUMENT_TOKEN_TO_BE_REPLACED
Author:
Aziz Bouabe
Date:
Mail:
Send via mail

END_OF_DOCUMENT_TOKEN_TO_BE_REPLACED
Social media
and networks
Subscribe to our
newsletter