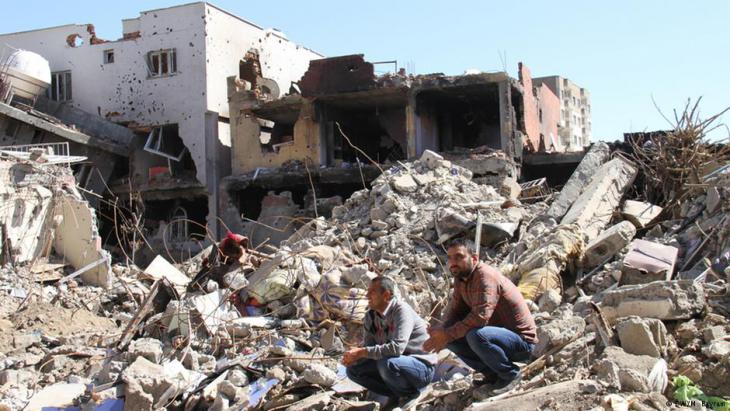 Turkey and the Kurdish conflict

The desolation of Cizre

Residents of Cizre, in Turkey's volatile southeast, have slowly been returning to the city which has been laid waste by a protracted military campaign targeting Kurdish militants. Tom Stevenson and Murat Bayram report

The smell of burned flesh permeated the basement, but inside there was little that could be identified as human at all. The walls were blackened by flames and only some small bone fragments remained; the smell was still thick, clinging to clothes and body alike.

This was one of three of the basements in Cizre's Cudi neighbourhood where Turkish security forces had stormed residential buildings in which it claimed militants were hiding, resulting in more than 100 deaths. The local Kurdish political party, DBP, released a statement on Tuesday saying that 300 people had been killed during the curfew. A full body count has yet to be performed and exactly what happened is still disputed by the state and local officials, but the seriousness of the assault was written on the building's walls.

Cizre was subjected to a round-the-clock lock-down for 79 straight days until the curfews were relaxed on 1 March, a measure the government claimed was intended to "ensure the safety and security of civilians." Now, the curfews have been partially lifted and residents may leave their homes during the daylight hours. We were able to enter the city twice during this time, alongside residents in search of their belongings who had fled before the lock-down was declared.

The Turkish government has been locked in a brutal campaign against militants linked to the banned Kurdistan Workers Party (PKK) in the predominantly Kurdish southeastern provinces of the country for more than seven months, imposing round the clock military lock-downs in several cities including central Diyarbakir, Cizre, Sirnak, Nusaybin, and Yuksekova. The open fighting in the streets of predominantly Kurdish cities is almost reminiscent of the Turkish state's 1980s and 90s military campaign in the southeast that claimed as many as 44,000 lives. 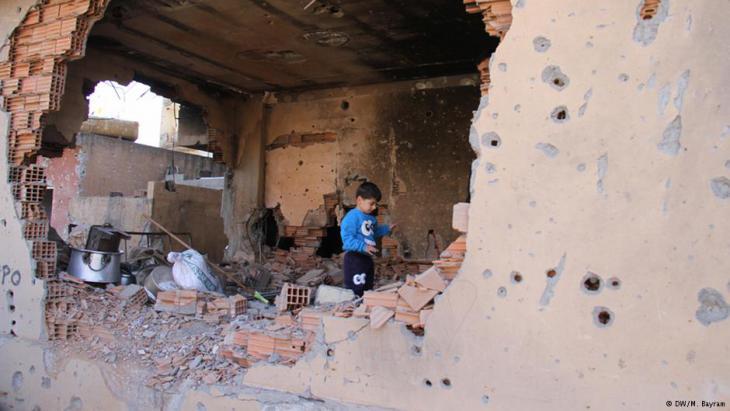 Nothing but ruins: Cizre was subjected to a round-the-clock lock-down for 79 straight days until the curfews were relaxed on 1 March. The destruction in Cizre cannot be overlooked. The open fighting in the streets of predominantly Kurdish cities is almost reminiscent of the Turkish state's 1980s and 90s military campaign, report Tom Stevenson and Murat Bayram

Abdullah Akan was one of the few who had been hiding in Cizre's basements who survived. In all there were 20 people hiding in his home, which was fortunate not to have been one of those stormed by security forces. "Down there, all we could hear was the sound of bombs," he recalled. "At one point our son went out into the courtyard and snipers shot him dead. His name was Ibrahim Akan and he was 16-years old – it was 26 days before we were allowed to collect his body," Akan said. "We lost our boy and our home, we have nothing here now."

The city has experienced a kind of destruction without parallel in Western Europe since World War II: street after street has been reduced to rubble, houses with holes in their sides the size of articulated lorries, multi-story apartment buildings burned out leaving only hollow shells, the rooms within them now a trichrome scheme of black, grey, and white ash.

The fighting itself was mainly concentrated in four neighbourhoods, Sur, Cudi, Nur, and Yafes where the streets are narrow, making it difficult for the army to use its heavy armour, and where the PKK-linked Civil Protection Units (YPS) fighters were able to better evade security forces. From the mountains that surround the city, the army used its heavy armour and artillery to pummel buildings in these neighbourhoods, inflicting great damage.

"For the last three months we haven't been able to work, but we've still had to pay taxes," Selim Usta, a local shop-owner, told DW. "I cannot understand how a state can attack shops and citizens like this, or how they can allow others to do the same... our doors were broken, and thieves took whatever they wanted.″ It felt like World War III, Usta said. 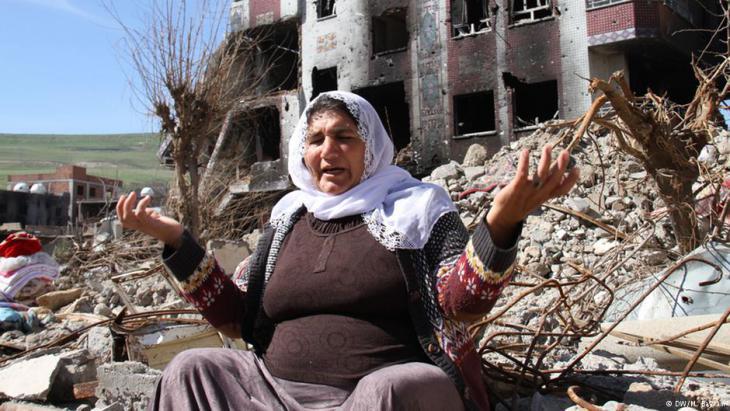 Fear and despair: many Cizre residents, returning to their city following the military campaign, find they have lost everything

In the city's hospitals, medical staff have been working constantly and during the 79 days of military lockdown were often forced to sleep inside the hospitals as they were unable to reach their homes. "Security forces were everywhere in the hospital," said one nurse who wished to remain anonymous for her own safety. "They were keeping watch in all our rooms, including the operating room." According to the nurse, when someone that security forces believed to be a militant was brought to the hospital the staff would be prohibited from looking after them. "And when a member of the security forces was wounded they wouldn't let the doctors tend to any of the wounded civilians until they were treated first."

For ordinary residents of Cizre the fighting has produced little but pain and most families have a story of grief to tell. "My husband is physically disabled and we couldn't get anything out of our house – we had to carry him," said Hanım Solmaz, 56, who fled the city. "The bullets were shooting past us. I didn't have time to get my shoes so I went barefoot with my seven children." Like so many others, Solmaz has lost almost everything and there's little sign of the safety and security the government promised.

"When we reached the checkpoint we were picked up by an ambulance which took us to a nearby village and we've been staying with a family there," she said. "Our house was destroyed, our animals were killed. We are very afraid."

Germany’s electorate includes some 7.4 million citizens with international roots, while many more millions of residents from abroad aren’t allowed to vote. Both groups are often ... END_OF_DOCUMENT_TOKEN_TO_BE_REPLACED

International relations are shifting across the Middle East as regional powers adapt to America's retrenchment and China's growing influence. Although the region could become the ... END_OF_DOCUMENT_TOKEN_TO_BE_REPLACED

Germany's foreign policy is explicitly values-based. But what happens, Ralf Bosen asks, when democracy, the rule of law and human rights collide with the logic of trade and ... END_OF_DOCUMENT_TOKEN_TO_BE_REPLACED

A new global database shows a significant gap in reported COVID-related deaths, suggesting the actual worldwide death toll is short by at least 1 million. That's due in part to ... END_OF_DOCUMENT_TOKEN_TO_BE_REPLACED

Ankara's foreign policy apparatus is currently running at top speed. While politicians in the West busy themselves with evacuating Kabul and analysing the chaos, which not even ... END_OF_DOCUMENT_TOKEN_TO_BE_REPLACED
Author:
Tom Stevenson & Murat Bayram
Date:
Mail:
Send via mail

END_OF_DOCUMENT_TOKEN_TO_BE_REPLACED
Social media
and networks
Subscribe to our
newsletter