Turkey and Armenia decided to establish ties due to a process started for the World Cup qualifying game. But just like in football the process faces risks, even off-side, as Ayşe Karabat reports 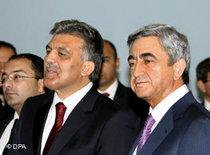 Thaw in Turkish-Armenian relations: the two states have agreed a protocol to adopt diplomatic relations, despite conflict over the Nagorno-Karabakh region

​​ The World Cup qualifying game in Yerevan last September between two estranged neighbours, Armenia and Turkey, resulting in 2-0 win for Turkey, was not only a sport event but a bold step in rapprochement efforts between the two countries.

Turkish President Abdullah Gül accepted an invitation from his Armenian counterpart Serzh Sarksyan to watch the game despite the many problems between the two countries and appalled reactions by the nationalist opposition in Turkey.

In fact the two countries had been holding closed-door talks for half a year at that time, focusing on ways to restore diplomatic relations and open the mutual border.

Turkey was one of the very first countries to recognise Armenia's independence in 1991 but never established diplomatic ties, and in 1993 Turkey closed its border after Yerevan-backed ethnic Armenians threw off Azeri rule in Nagorno-Karabakh.

Over years of non-dialogue it has been assumed that Yerevan refused to recognise the Gümrü and Kars agreements which established the Turkish-Armenian border in 1920 and 1921.

One controversy between Turkey and Armenia is the recognition of the 1915 massacre of Armenians in the Ottoman era. Armenia demands that Turkey acknowledges the violence as genocide

​​ The dispute is further complicated by Armenian claims of genocide for the Ottoman-era massacres of Armenians in World War I, a charge denied by Turkey but the cause of many diplomatic disturbances with third countries including the EU, the US administration, Canada and even Israel.

Now, however, a rapprochement between Turkey and Armenia seems within reach.

Ankara this year announced it had reached an agreement with Yerevan on a road map for normalising relations, just two days before the 94th anniversary of 24 April – commemorated in many countries as a day of remembrance for the victims of the Armenian massacres. Drawing praise from the United States, this helped President Barack Obama to soften his statement on 24April, although he promised to recognise the Armenian Genocide claims.

But Turkey's announcement deepened the concerns of Azerbaijan, which shares cultural and linguistic ties with Turkey and is an important gas supplier. During a visit to Baku on 14 May, Turkish Prime Minister Recep Tayyip Erdoğan promised the Azerbaijani National Assembly that the Turkish-Armenian border would not be opened unless Armenia withdrew its troops from Nagarno Karabakh. This promise raised doubts about Turkish-Armenian reconciliation in the foreseeable future.

But just as surprises are not uncommon in football, suddenly at midnight on 31 August, one day before World Peace Day, Ankara, Yerevan and their Swiss mediators in Bern issued a joint statement. The negotiation partners announced that Ankara and Yerevan had agreed to start internal political consultations on two protocols, the “Protocol on the Establishment of Diplomatic Relations” and the “Protocol on the Development of Bilateral Relations”. But just like in football there are many risks in a bold rapprochement process – including off-side and even foul play. 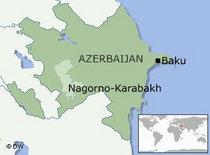 Bone of contention: Turkey and Armenia broke off relations in 1993 due to the conflict between Armenia and Azerbaijan over the Nagorno-Karabakh region

​​ The joint statement underlined that "the two Protocols provide for a framework for the normalisation of their bilateral relations within a reasonable time frame. The political consultations will be completed within six weeks, following which the two Protocols will be signed and submitted to the respective Parliaments for the ratification on each side. Both sides will make their best efforts for the timely progression of the ratification in line with their constitutional and legal procedures."

The first protocol also refers to "reiterating their [Armenian and Turkish] commitment to the peaceful settlement of regional and international disputes and conflicts on the basis of the norms and principles of international law" but does not set any preconditions. The opposition in both countries was however quick to criticise the protocols on the Nagorno-Karabakh issue.

"The most interesting part of this process is that the nationalist opposition in Turkey is raising Cain since Nagorno-Karabakh was not set as a precondition, but at the same time the Armenian opposition is raising Cain too on grounds that the same issue was set as a precondition between the lines," the columnist Semih İdiz wrote in Turkey’s Milliyet newspaper.

Suat Kınıklıoğlu, a deputy from the ruling Justice and Development Party (AK Party), underlined that "both countries are entering a period in which opposition to the protocols will be articulated loudly and the challenge will stand firm".

"If there is no movement on Nagorno-Karabakh, it will be up to the Turkish parliament to assess the situation and judge accordingly," he said.

According to the agreement the protocols can only enter into force after the two parliaments' approval, hopefully after the six weeks of consultations. But even if approval arrives after exactly six weeks, it will take an additional two months to put them into effect. Ankara regards this prolonged period as an opportunity to achieve progress regarding the Nagorno Karabakh issue.

Turkish Foreign Minister Ahmet Davudoğlu, who has frequently stated that the aim is to have a "zero problem" policy with neighbours, said that Turkey had sent a very strong message to the international community:

"After this point the international community should do its part and synchronised efforts should be exerted to resolve disputes in the South Caucasus," he added.

Regarding the Armenian genocide claims, the second protocol on the development of relations between Armenia and Turkey states that the two countries have agreed to "implement a dialogue on the historical dimensions with the aim to restore mutual confidence between the two nations, including an impartial scientific examination of historical records and archives to define existing problems and formulate recommendations."

In fact Turkey has repeatedly proposed establishing a "joint history commission", but has been snubbed since Armenia argues that there is no need for examining a clear fact such as the “Armenian genocide”.

"The establishment of such a commission will mean moving from the political field to the historical field. This is why the protocols are considered documents of treason by the Armenian opposition," İdiz underlined.

A brave and statesmanlike step

But despite the opposition reactions in both countries, many commentators, such Hugh Pope from International Crisis Group, have stated that Turkey and Armenia have taken a brave and statesmanlike step. Both will win if it succeeds: 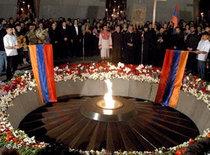 Obsequies in Yerevan: according to Armenian estimates some 1.5 million people died in the 1915/16 deportations. Turkey assumes a figure of approximately 200,000

​​ "Armenia will overcome the sense that it is surrounded and under siege, will open a new commercial and psychological gateway westward to Europe, will be able to look better after the interests of the many tens of thousands of Armenians working in Turkey, will be able to market its electricity surplus and have easier access to the many Armenian cultural and religious sites in eastern Turkey," Pope comments.

According to him Turkey's gains will also be significant. It will be able to show Western partners that it is working toward closure on the contested matter of the World War I massacres; and "to add a new plank in its efforts to bring stability, prosperity and cooperation through relations with its Caucasus neighbours; and, finally, to achieve the satisfaction of full and public Armenian recognition of its borders."

The six-week ratification process will end on 14 October, just two days before the return match between Armenia and Turkey, this time in Bursa in western Turkey. Before these latest developments, Armenian President Sarksyan had stated that he would not accept Gül's invitation to watch the game unless Turkey took "real steps" to reopen its border.

Asked if that is the case, Davudoğlu said "Turkey expects Sarksyan to visit Turkey for the game", and he added:

END_OF_DOCUMENT_TOKEN_TO_BE_REPLACED
Social media
and networks
Subscribe to our
newsletter