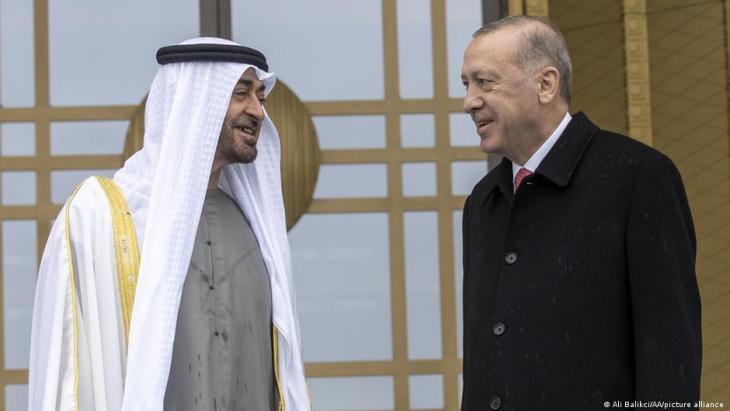 Turkey
Erdogan's search for partners in the Middle East

Ankara is seeking to improve its relations with several states in the Middle East – such as the United Arab Emirates, Egypt and Israel. There are several reasons for this. Meanwhile, those being approached are not averse to the idea. By Kersten Knipp

They have a lot to talk about. A few days after Mohammed bin Zayed Al Nahyan, the Crown Prince of Abu Dhabi, visited Ankara on 24 November, he and Turkish President Recep Tayyip Erdogan resumed their conversation. The two leaders discussed steps to improve relations between their countries, reported the Turkish newspaper Daily Sabah.

The two heads of state had already signed several declarations of intent relating to investment in the fields of energy, finance and health during the previous week. At the same time, it was reported that the UAE has set up a ten billion dollar (8.83 billion euro) fund to support investment in Turkey, which is currently struggling economically.

In terms of foreign policy, Turkey has become very isolated in the Middle East in recent years, says Kristian Brakel, head of the Istanbul office of the Heinrich Boll Foundation. Following 2011, the year of the "Arab Spring", it was considered a major power in the region, alongside Saudi Arabia. This reputation was largely based on its enthusiastic support for religious movements with social-revolutionary objectives such as the Muslim Brothers in Egypt. "But then there was an authoritarian renaissance, in the course of which many of the revolutionary, often Islamist, actors supported by Turkey were forced out." As a result, Ankara had to come to an understanding with the more conservative regimes, such as those in the Gulf.

Turkey and the Emirates need each other

The Turkish-Emirati dialogue comes at a time of general rapprochement across the Middle East, writes the pro-government Daily Sabah in its commentary. It is unrealistic to expect the two states to resolve all differences immediately. But common economic interests could stimulate negotiations on regional crises, the paper says. "This new chapter is about simultaneous competition and cooperation between Turkey and the United Arab Emirates (UAE) in regions such as the Eastern Mediterranean, Greece, Libya and the Horn of Africa." This development is bound to lead to a new kind of relationship. 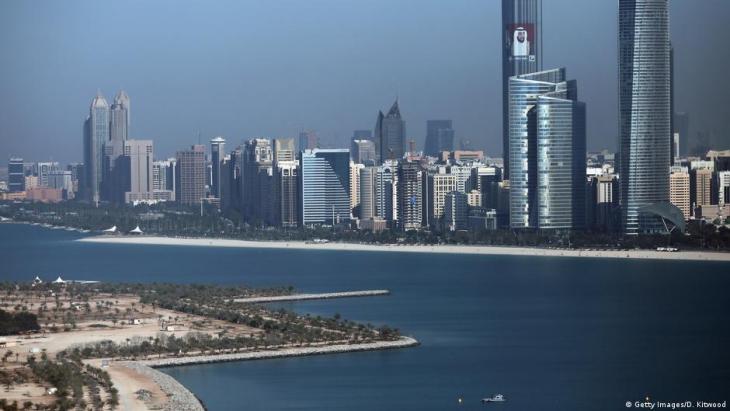 The skyline of Abu Dhabi in the United Arab Emirates (UAE): for a long time, the influential economic power in the Gulf was considered by Turkey to be responsible for all the ills in the region. But that has now changed. Mohammed bin Zayed Al Nahyan, the Crown Prince of Abu Dhabi, and Turkish leader Recep Tayyip Erdogan signed several declarations of intent relating to investment in energy, finance and health. At the same time, according to press reports, it was announced that the UAE had set up a ten billion dollar (8.83 billion euro) investment fund. Money that Turkey's hard-pressed economy could well use

The UAE and Turkey have also found common ground in the military disillusionments of recent years. "Both were extremely self-confident in terms of foreign policy," says political scientist Hakki Tas of the Hamburg-based Leibniz Institute for Global and Area Studies (GIGA). "In several conflicts, from Syria to Yemen to Libya, they were on opposite sides. These conflicts are unlikely to be resolved in the foreseeable future. The political and economic burden caused by them, on the other hand, has become ever greater." Moreover, Tas said, the UAE's rapprochement with Turkey is also a reaction to the United States' withdrawal from the region. Like Saudi Arabia, the Emirates is aiming to fill the resulting power vacuum with new allies. Turkey is one of its potential partners.

Restoring its once close relations with Israel

Turkey is not only looking to establish new ties with the UAE. It also wants to improve relations with Israel, the Turkish president declared at the end of November. "Just as we have taken a step towards to the United Arab Emirates, so we will take similar steps with other states," Erdogan said. The statement was particularly directed at Israel and Egypt. In November, Erdogan also held talks with representatives of Israel. Turkey then released an Israeli couple, Mordy and Natali Oknin. The two had photographed one of Erdogan's official residences in Istanbul and were subsequently detained for eight days on charges of espionage.

After years of peaceful relations, Israel and Turkey fell out in 2010 when the Israeli navy stopped a Turkish aid ship, the Mavi Marmara, which was heading for the then blockaded Gaza Strip. Ten activists on the ship were killed. Both countries then recalled their respective diplomatic envoys. 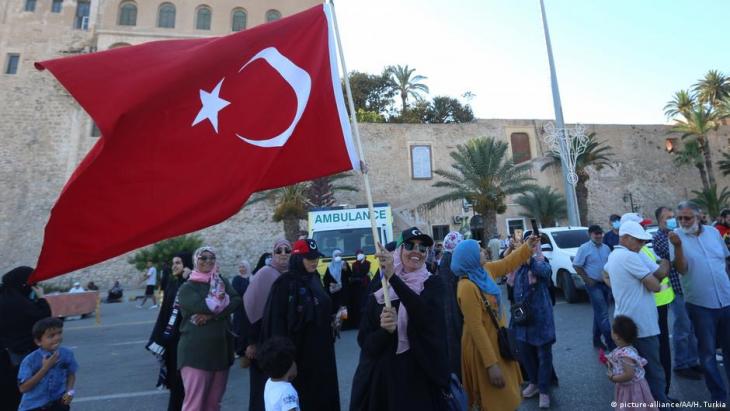 Libyans linked to Turkey protest in Tripoli against the policies of Egypt's President Abdul Fattah al-Sisi: the conflict between Egypt and Turkey is closely linked to the Libyan civil war, where both countries are on opposite sides. In turn, the Libyan engagement of both states is intertwined with the dispute over the extraction of natural gas in the eastern Mediterranean. Indeed, Turkey has repeatedly tried to use its presence in Libya to up its bargaining power in the gas dispute, for instance by proposing to agree on bilateral sovereignty zones in the Mediterranean. The proposals, however, failed. "Yet now, Turkey seems to want to approach Egypt," says Kristian Brakel, head of the Istanbul office of the Heinrich Boll Foundation. "So far, the two sides have not been able to reach an agreement on Libya. But that could now change"

Despite the political ice age, economic exchange between the two countries has grown steadily in recent years, says Kristian Brakel. On the one hand, Turkey wants to reduce its energy dependence on Russia. In addition, Ankara sees Israel as a core state in the conflict over gas reserves in the eastern Mediterranean. In this dispute, Turkey faces the common interests of Greece, Cyprus, Egypt and Israel.

In addition, Turkey is aware of the necessity of first repairing relations with Israel in order to improve relations with the USA, says Hakki Tas. "While scenarios for the time after Erdogan are already circulating in western media, Erdogan seems to want to focus on detente in diplomatic relations with the USA and the EU, as well as with the regional powers in the Middle East."

Despite differences on the Libya issue: Erdogan approaches Cairo

Turkey is also trying to improve relations with Egypt. Back in May of this year, a high-ranking Turkish delegation visited Cairo for talks. Since then, both sides have been in continuous dialogue with each other.

Relations between the two countries had cooled over the years. Tensions began in 2013 when the then President Mohammed Morsi, a Muslim Brother, was overthrown by the Egyptian military. Morsi had been supported by Erdogan. Erdogan's own party, the AKP, is politically close to certain aspects of the Muslim Brotherhood.

From Ankara's point of view, however, the main issue is the dispute over gas reserves in the Mediterranean. "This conflict is, after all, closely linked to Ankara's involvement in Libya, where Turkey and Egypt are on opposite sides," says Kristian Brakel. Indeed, Turkey has repeatedly tried to use its presence in Libya to up its bargaining power in the gas dispute, for example by proposing to agree on bilateral sovereignty zones in the Mediterranean. These proposals, however, failed. "Yet, now, Turkey seems to want to approach Egypt," says Brakel. "So far, the two sides have not been able to reach an agreement on Libya. But that could now change."

Moreover, Egypt is currently heavily dependent on Saudi Arabia, says Hakki Tas, "and in view of its weak economy, rapprochement with Turkey would probably be very convenient for Egypt." Now both countries want to re-open their mutual embassies. This, says Hakki Tas, is symbolic of the improvement in bilateral relations. Still, full normalisation should not be expected just yet.

The devaluation of the Egyptian pound combined with rising food prices is taking its toll on Egypt. More and more people are slipping into poverty. Karim El-Gawhary reports from ... END_OF_DOCUMENT_TOKEN_TO_BE_REPLACED

Egyptian Sufis have been on the defensive against the country's Islamists for decades. Meanwhile, interest in mysticism is growing among the young members of Cairo’s middle and ... END_OF_DOCUMENT_TOKEN_TO_BE_REPLACED

Abortions are illegal in Egypt unless they are necessary to save a married woman's life. But that doesn't stop local women from having one. Egyptian society needs to acknowledge ... END_OF_DOCUMENT_TOKEN_TO_BE_REPLACED

Food prices doubled, salaries halved, banks restricting withdrawals: Egyptians now have the same problems as the Lebanese. But if things get worse here, the fallout will be far ... END_OF_DOCUMENT_TOKEN_TO_BE_REPLACED

Giessen, Eichsfeld, Kusel, Berlin – cars bearing old German number plates are the latest trend on the streets of Cairo. Many Egyptians regard the discarded plates as chic. What ... END_OF_DOCUMENT_TOKEN_TO_BE_REPLACED

END_OF_DOCUMENT_TOKEN_TO_BE_REPLACED
Social media
and networks
Subscribe to our
newsletter