Skip to main content
Turkey: Guest of Honour at the Frankfurt Book Fair

The power struggle between Turkey's laicists and Islamists has not left the cultural scene untouched, and is now throwing its shadow over the book fair in Frankfurt. In protest against the AKP government, a group of Turkish authors intends to boycott the fair. By Susanne Güsten 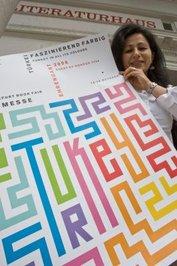 The Frankfurt Book Fair: political bone of contention between Kemalist and Islamist rivals in Turkey. Some 20 writers plan to boycott the event

​​Ertugrul Günay is a friendly man with a frequent smile, far removed from clichés of fervent Islamists. The Turkish minister of culture and tourism sees himself as an aide for his country’s literature at this year’s Frankfurt Book Fair from 15 to 19 October, where Turkey is the Guest of Honour.

But for some critics, the 60-year-old minister is the spearhead of an Islamic attempt to co-opt the fair. Shortly before the most important cultural event for Turkey in years, the country is looking on as the bitter political power struggle between the Kemalists and the religious conservatives takes centre stage in literature and the book fair.

Under the motto "Turkey in all its colours", some 350 Turkish writers, most prominently the Nobel laureate Orhan Pamuk, and representatives of more than 100 Turkish publishers are expected in Frankfurt in October.

One group of authors, however, will not be joining them. They accuse Minister Günay and the government under Prime Minister Recep Tayyip Erdogan of exploiting the book fair for their own political ideas. These writers are calling on their colleagues to boycott the fair.

Turkish Kemalists, who trace their ideas back to Atatürk, the founder of modern Turkey, and regard Erdogan as an Islamist, have long since suspected the prime minister of trying to transform Turkey into a moderate Islamic state.

In their opinion, Turkey is to be made into a country no longer governed under laicist principles, but by a soft-boiled form of Islamism, which not only the government supports, but also – they allege – the USA, in the hope of creating a model state for the future of the entire Near and Middle East.

Turkey is the Guest of Honour at the Frankfurt Book fair, under the motto "Turkey in all its colours"

​​The boycotters are not deterred by the fact that Erdogan and Minister Günay, who only joined the governing religious conservative party AKP last year after decades in the Kemalist party CHP, reject these accusations.

The government intends to change the secular character of Turkey using the moderate Islam model, says the Istanbul-based literary critic Füsun Akatli, a spokeswoman for the boycott movement, so far made up of about two dozen writers.

But, says Akatli, writers who speak out in favour of allowing headscarves on campus for female students, for example, are only a tiny minority that should not play a role in the presentation of Turkey at a major fair like Frankfurt.

Günay defended his stance on Turkish television, pointing out that the government sees its task solely as providing the infrastructure for the book fair, at a cost of six million euro. He ruled out any form of ideological influence, dismissing the boycott movement as a "small group". 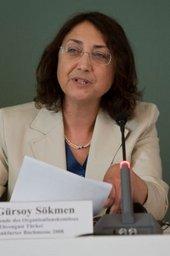 "The book fair is not a government-run event but a meeting for publishers," says Müge Gürsoy Sökmen, publisher and co-chair of the organisational committee

​​The Turkish organisational committee in Frankfurt also reacted to the boycott with incomprehension. The book fair is not a government-run event but a meeting for publishers, said Müge Gürsoy Sökmen, a publisher and co-chair of the committee. The Turkish government has had no influence over the programme, she added, which includes some 250 events from readings to discussions to theatre performances.

Nor was the government involved in deciding which Turkish writers were invited to Frankfurt and which were not, Sökmen told the Turkish internet portal "bianet".

It seems the boycotters are having little success with Turkish authors. The novelist Ahmet Ümit, for example, said that he is not a friend of the AKP either, but there is no point in boycotting the book fair in protest against Erdogan’s party. There has been no news of a wave of Turkish writers cancelling their appearances, two weeks before the fair kicks off.

Not a minor programme issue

Yet Minister Günay hasn’t quite succeeded in erasing all accusations of political influence. This may well be his own fault, at least to some extent. He ensured that the book fair’s opening gala will feature an oratorio by the Turkish composer Adnan Saygun, translated into German.

The piece is based around 13 religious poems by Yunus Emre, a 14th-century Turkish folk poet. Originally, the gala was planned to showcase an oratorio by the young pianist and composer Fazil Say, about the communist poet Nazim Hikmet.

At first glance a minor programme issue, this was a highly political decision for Fazil Say. The musician is one of the Turkish government’s Kemalist critics, and has already publicly voiced thoughts of emigration due to Erdogan’s alleged attempts to Islamise the country.

It is no coincidence that Günay had his piece taken off the programme for the opening gala, said Say – his music was "censored". Say has also come out in favour of the book fair boycott: he won’t be coming to Frankfurt now, he announced recently in the Hamburger Abendblatt newspaper.

Frankfurt Book Fair 2004
A Great Opportunity for Arab Publishers
As head of the "American University in Cairo Press", Werner Mark Linz is also the publisher of Nobel prize laureate Nagib Machfus. In this interview he talks about the current situation on the Arab publishing and literary scene and preparations for the Guest of Honour presentation at the Frankfurt Book Fair in October.

END_OF_DOCUMENT_TOKEN_TO_BE_REPLACED
Social media
and networks
Subscribe to our
newsletter