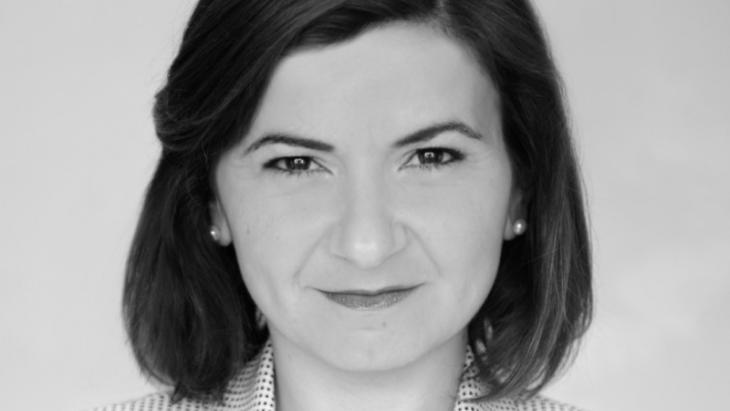 No haven for refugees

Turkey′s military has been leading operations in the east of the country for months. The clashes have cost hundreds of lives so far. Ceyda Nurtsch spoke to Bilgin Ayata, assistant professor of political sociology at Basel University, about the political motivation behind the conflict and its impact on Turkey′s citizens

The AKP government stopped the negotiations with the PKK which went on for two years, claiming it is fighting terrorism. Many say it is a fight against the Kurdish people. What is your assessment of the situation?

Bilgin Ayata: I do think that the war is being led against the Kurdish population living in those regions. Amnesty International and Turkish human rights organisations have pointed out that several provinces have been held under open-ended, round-the-clock curfews for more than sixty days now. NGOs state that over 1.3 million Kurdish civilians are affected by these curfews and military operations and at least 160 civilians have died so far. Families are prevented from helping the wounded and burying their dead, as the corpses are withheld by the security forces. Some 80,000 children have been unable to go to school for two months now. The minister of education sent text messages to the teachers telling them to leave the region before the military operations started. Over 200,000 people have been displaced from their homes. This shows the extent of this military siege that is taking place in the Kurdish provinces. In a recent report, Amnesty International stated that the measures being undertaken by the state amount to collective punishment of the Kurdish population and I agree.

Many people say that Turkey´s fight against IS is a proxy war. Would you agree with that?

Ayata: Absolutely. In fact, it would be more appropriate to say that by fighting the Kurds, Turkey is effectively protecting IS from its most important challenger in the region. Everyone knows now that under the pretext of fighting IS and the PKK, the Kurds are targeted disproportionately, not only the PKK but also the HDP.  HDP is the legal political party that has emerged from the Kurdish movement. It achieved a very significant and important victory in the national elections in June 2015, despite many violent attacks against its offices and election rallies. The government then ordered new elections in a bid to revise the outcome of the June election. Parallel to the announcement of new elections (which took place in November 2015), a series of bomb attacks were carried out on HDP strongholds, military operations began and the peace process was officially terminated. After the elections, the war against the Kurds only intensified as the HDP managed to enter parliament. But the MPs were soon forced to realise that power has shifted from the parliament to the president. It is now the president that makes the important decisions, with parliament simply nodding approval. 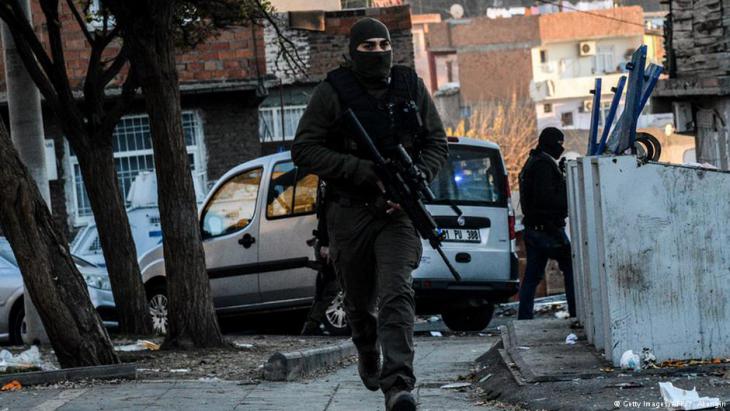 Waging war on the population: "Amnesty International and Turkish human rights organisations have pointed out that several provinces have been held under open-ended, round-the-clock curfews for more than sixty days now. NGOs state that over 1.3 million Kurdish civilians are affected by these curfews and military operations and at least 160 civilians have died so far. Families are prevented from helping the wounded and burying their dead, as the corpses are withheld by the security forces," comments Bilgin Ayata

Erdogan sees the HDP as the political arm of the PKK. Aside from domestic Turkish politics – AKP's loss of its absolute majority in the June elections – how have developments in Syria with its growing Kurdish autonomy or in Iraq where there has been an autonomous Kurdish region since 2003, affected the government's motivation and tactics?

Ayata: Turkey's foreign policy has been highly inconsistent. The AKP began by focusing on intensifying relations with the EU. Then, the focus turned to the Middle East with the slogan ″Zero problems with the neighbourhood″. Only a couple of years later, in 2012, Turkey was on the brink of war with Syria. Today its relationships with its entire neighbourhood are at rock bottom: it recently attacked Russia, a key trading partner and is at loggerheads with Syria, Egypt, Iraq, Iran and Israel. Turkey has manoeuvred itself from a position of aspiring regional leadership to that of an unreliable and inconsistent actor.

At this point, to understand the role of the Kurds, we need to look at the Arab uprisings. In 2011 there was this saying: ″Arab Spring, Turkish harvest″. Turkey seemed to reap the regional benefits of the various regime changes and was gaining more and more influence in the region. But the Kurds, too, emerged as winners from the Arab uprisings, though this would only become apparent later. They experienced political empowerment in Syria, which only added to their empowerment in Iraq and also in Iran, which was not directly affected by the protests. There is now a Kurdish belt around Turkey – only added to by the empowerment of the Kurds within the country – which has made and is still making the government extremely nervous. Preventing and diminishing this empowerment is once again a key goal for Turkey′s policy in the region.

From the outset, I interpreted the domestic peace process as an attempt to contain the Kurdish movement within Turkey by creating vague prospects for a solution to the conflict and promising some rights which would tie the Kurds to Turkey and prevent them to join the establishing of Kurdish autonomy in Rojava. But the process has been more rhetoric and tactic than substance. The fact that the peace process was substituted for war from one day to the next shows that there was never a sustained commitment by the government to substantially include the Kurds within the political process. In fact it was an attempt to prevent the Kurds from becoming even stronger and more powerful in the region.

What is the role of the PKK within this scenario?

Ayata: The PKK is of course aware of the changes in the region and, as anyone else involved in the conflict, is also engaged in power politics. The PKK received international recognition in 2014, when it not only rescued the Yezidis from the genocide in the Sinjar mountains, but also helped to prevent Kobani from being taken over by IS. International observers acknowledged the importance of the PKK in the fight against IS and the PKK was presented very positively in Western media. The Kurdish female fighters achieved cult status in women′s magazines and the media portrayed the PYD and the PKK as antidotes to the politics of IS. For leftists around the world, Kobani is currently a beacon of radical democratic experiment in the midst of war, inspired by the PKK leader Ocalan and his writings. All of these developments have strengthened the PKK, which not only wants to be taken seriously but also wants to shape change in the region. 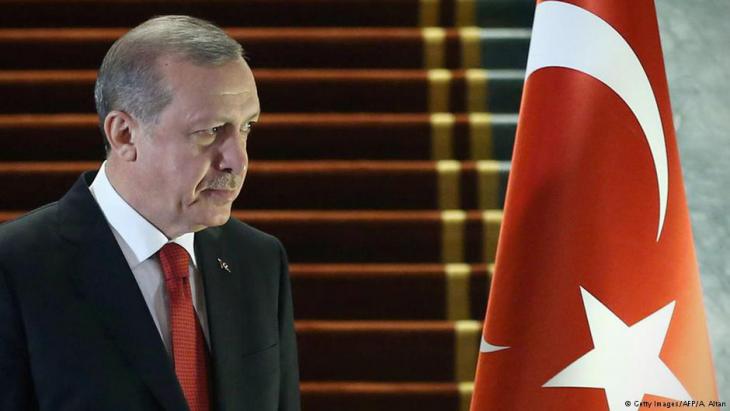 Serving self-interest: "the EU has entered a politically corrupt deal with Turkey with the mere goal of preventing refugees from coming to the EU. Fully aware of the rapid regression of any conventional human rights standards in Turkey, European leaders are nevertheless giving Erdogan and Davutoglu the royal treatment in Brussels and Berlin. To imagine that you can simply outsource asylum seekers to a country where over one million people are suffering from a military siege is outright dangerous and inacceptable," states Bilgin Ayata

Neither the EU nor NATO has criticised Turkey so far. Instead, because of the refugee question and Turkey′s status as an ally against IS, they are in support. How should they be reacting?

Ayata: The current political situation both in the Middle East and in Europe is giving the Turkish government a free hand, allowing it to act without any respect for human rights or democracy. Erdogan has been using the mere fact that Turkey has taken in the most Syrian refugees as a very powerful instrument.

The EU has entered a politically corrupt deal with Turkey with the mere goal of preventing refugees from coming to the EU, just as it did many years ago with Gaddafi. Fully aware of the rapid regression of any conventional human rights standards in Turkey, European leaders are nevertheless giving Erdogan and Davutoglu the royal treatment in Brussels and Berlin. To imagine that you can simply outsource asylum seekers to a country where over one million people are suffering from a military siege is outright dangerous and inacceptable.

Turkey has not provided any legal status to the Syrian refugees so far and treats them as temporary guests. That′s why the Syrians are leaving – they have no viable prospects there. Turkey has a record of producing refugees; there are over 1 million internally displaced Kurds in Turkey who do not receive adequate assistance. Now thousands of Kurdish families are once again being displaced. If Turkey continues its current policy, Kurdish refugees will soon be making their way to Europe in large numbers, as they did in the 1990s.

Bilgin Ayata is assistant professor for political sociology at Basel University. She graduated from York University in Canada and received her PhD at Johns Hopkins University in the USA. Her field of research is the Kurdish conflict, forced migration and transformation processes.

The European Court of Justice has given its backing to companies that don't allow female Muslim staff members to wear headscarves – as long as they don't permit the wearing of ... END_OF_DOCUMENT_TOKEN_TO_BE_REPLACED

The disappearance of Razan Zeitouneh and her colleagues has been one of the greatest mysteries of the Syrian war – until today. DW's investigative unit hunted clues across six ... END_OF_DOCUMENT_TOKEN_TO_BE_REPLACED

Muslims in Europe regularly experience threats, witness attacks and are the target of hate across national borders. Now the Council of Europe, the continent's leading human rights ... END_OF_DOCUMENT_TOKEN_TO_BE_REPLACED

The West is pulling out of Afghanistan after 20 years, but the conflict remains – and the Taliban are stronger than they have been for a long time. And now? The renowned Taliban ... END_OF_DOCUMENT_TOKEN_TO_BE_REPLACED

United States and NATO troops are leaving Afghanistan after 20 years, despite the fact that the Taliban is still advancing. The German Bundeswehr is already out. Sandra Petersmann ... END_OF_DOCUMENT_TOKEN_TO_BE_REPLACED
Author:
Ceyda Nurtsch
Date:
Mail:
Send via mail

END_OF_DOCUMENT_TOKEN_TO_BE_REPLACED
Social media
and networks
Subscribe to our
newsletter