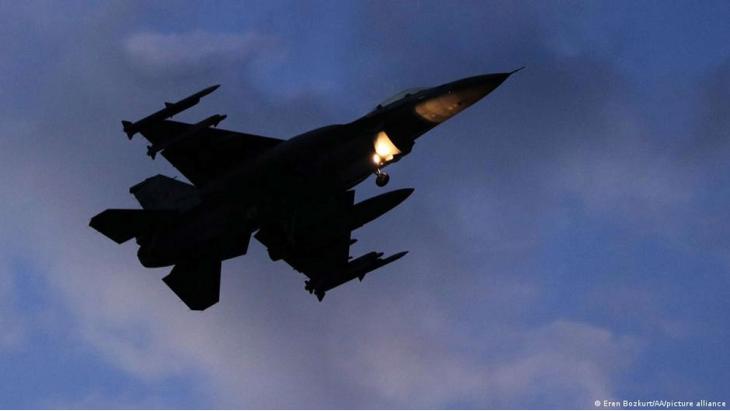 The Kurds are under attack from two sides: from Turkey, and from Iran. The situation in their territories in northern Iraq is becoming increasingly desperate. Birgit Svensson reports from Erbil

Who would have thought that Iraq’s capital Baghdad would ever be safer than the Kurdish metropolis of Erbil? Not long ago, the three Kurdish provinces of Erbil, Sulaymaniyah and Dohuk in northern Iraq were considered a safe haven from the rampant terror in the rest of the country. Erbil was green on the security map, Baghdad red.

The Kurdish regional government did everything it could to keep terror out. Strict controls at the autonomous regions' land borders and at the airport have long offered protection from bombs and explosive devices. Moreover, the Kurds were particularly proud of their security forces.

The peshmerga have become synonymous with Kurdistan. Countless military advisors from all over the world trained the former Kurdish freedom fighters as counterterrorism fighters, arming them against the jihadists of IS, who wreaked havoc in northern Iraq until 2017 and still maintain sleeper cells there. But the peshmerga are powerless against conventional armies like those of Turkey and Iran.

For weeks, neighbouring Turkey and Iran have both been targeting the Kurdish areas in northern Iraq. While the Turkish army has for years flown attacks on Turkish Kurdish Workers' Party (PKK) positions in Iraq, Iran only began launching its massive attacks on northern Iraq as the latest wave of domestic protests kicked off in September.

Also new is that both countries are now conducting their airstrikes at the same time. They give "reckoning" as the reason: reckoning with their own Kurds, who are said to be sparking the protests in Iran and conducting attacks in Turkey. But they are also settling accounts with the Iraqi Kurds harbouring them.

About 50 kilometres before Sinjar, our journey comes to an end. "You can't go any further," a strapping soldier in Iraqi army uniform blocks the reporter's path. Behind him stands a shorter, plump man in civilian clothes who nods: "Orders from Baghdad," he says importantly. "Foreigners are not allowed to enter Sinjar, it is too dangerous." Here, the secret service and the army jointly control the checkpoint on the main road from the Kurdish metropolis of Erbil to the far northwest of Iraq. 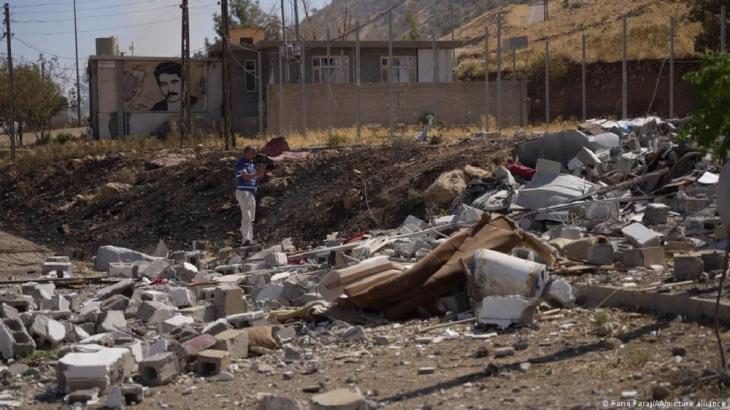 Destruction in Erbil following an Iranian attack: at the same time as Turkey launches missiles, Iran uses drones to target bases belonging to Iranian Kurdish opposition groups in Iraqi Kurdistan. They are fired at neighbouring Iraq from the Hamza Sayyid al-Shuhada military base run by the Iranian Revolutionary Guards in the Kurdish region of Iran. The elite unit of the Iranian armed forces, which reports directly to the country's supreme leader, Ayatollah Ali Khamenei, speaks in a statement of "separatist anti-Iranian terrorist groups" that are currently under attack and have taken shelter in the Iraqi-Kurdish provinces of Erbil and Sulaymaniyah

The driver thinks he hears the thunder of missiles in the background. The Yazidi town of Sinjar is under attack. We turn around and drive straight to Mosul.

There we learn that a Turkish air attack on positions held by the Kurdish PKK and its Syrian subsidiary YPG is in full swing. Missiles are falling on northern Syria, Aleppo, Raqqa and Hasakah, on the border region with Iraq in southern Turkey, on the Qandil mountains in the east of the Iraqi-Kurdish autonomous province of Sulaymaniyah and on Sinjar in western Iraq, towards the Syrian border.

Operation "Claw Sword" has begun. The American consulate-general in Erbil sends out warnings to compatriots to avoid or leave northern Iraq. En route to the World Cup in Qatar, Turkish President Recep Tayyip Erdogan announces he will not shy away from deploying ground troops.

The airstrikes come a few days after the Istanbul bomb blast, which Ankara blames on the YPG and the PKK. Investigations are ongoing, with a total of 50 people arrested so far. The two Kurdish organisations, which Erdogan calls terrorist, deny involvement and accuse Turkey of using the accusation as a pretext for a military operation in northern Syria.

Turkey needs no such pretext for Iraq, however. Turkish soldiers have been on Iraqi territory for a long time. In the north, on the border with Turkey, in Zakho and 30 kilometres from Mosul, in Bashika. Estimates put the number of Turkish soldiers at 3,000, stationed in the days of the IS caliphate with the argument that they were there to fight Islamic State and protect Turkmen of Turkish origin.

In reality, however, local residents report that the presence of the Turkish army is aimed at the Kurdish groups they hate, who have taken refuge in Iraqi-Kurdistan. The PKK maintains positions in the Qandil mountains in the east and in Machmur, south of Erbil, with the YPG in Sinjar.

At the same time as the Turkish missiles, Iran is deploying drones to attack bases belonging to Iranian-Kurdish opposition groups in Iraqi-Kurdistan. The strikes on neighbouring Iraq are operated from the Hamza Sayyid al-Shuhada military base run by the Iranian Revolutionary Guard in the Kurdish part of Iran.

In a recent statement, the elite unit of the Iranian armed forces, which reports directly to the country's supreme leader, Ayatollah Ali Khamenei, talked about "separatist anti-Iranian terrorist groups" sheltering in the Iraqi Kurdish provinces of Erbil and Sulaymaniyah being currently under attack. The mayor of the town of Koya, in Erbil province, tells the Kurdish TV station Rudaw that not only was the office of the Kurdistan Democratic Party of Iran targeted, but also a camp housing refugees from Iranian Kurdish areas.

Iran's ruling clerics accuse the exile groups in northern Iraq of fuelling the nationwide protests against the government and the Islamic system of rule in Iran. Iraqi Kurdish organisations have been supporting the ongoing protests in Iran since the death of the young Kurdish woman Jina Mahsa Amini in mid-September and denounce the massive violence against protesters.

Observers in Erbil are divided on whether this support goes beyond providing shelter for the Iranian Kurds or whether weapons and technical equipment for the resistance are also being smuggled across the border. Now it is being reported that Iran has massed troops on the border with Iraq, thus it would seem the Islamic Republic is also considering deploying ground troops in Iraq. "We Kurds are afraid," says the former mayor of the city of Erbil, Nihad Qoja. "No one knows where this will lead." 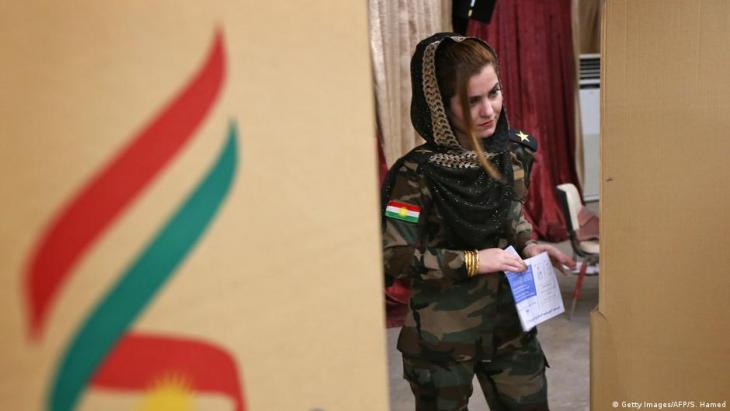 Teaching the Kurds a lesson? When former Kurdish president Masoud Barzani held a referendum on an independent Kurdistan in 2017, more than a few warned him about his neighbours. Iran and Turkey would never accept a Kurdish state on their doorstep. But Barzani received over 90 percent approval with a high voter turnout. His goal was not only to make an independent state out of the existing autonomous areas. He wanted areas that until then had been under the administration of Baghdad to also be part of the new state, likewise the region in northern Syria, called Rojava, which is currently under Kurdish administration

The fact that the Kurdish autonomous regions have long been spared the violence and extremism that dominated the rest of the country for years – first with al-Qaida, then IS – is thanks to the Kurds regarding ethnicity rather than religion as central to their identity.

As the Erbil-based Middle East Research Institute (MERI), now an internationally recognised think tank, pointed out in a study published at the end of October, being "kurdayati", or Kurdish, was the decisive element that kept things largely quiet in the Kurdish regions after the fall of Saddam Hussein in 2003.

This Kurdish identity has also helped keep religiously motivated extremism and violence in check. Only 530 young Kurds had joined the extremist jihadists of IS, MERI said. "Kurds did not want to fight Kurds".

But now it is precisely being "kurdayati" that appears to have become the problem. The Iraqi Kurds, especially those in Erbil, are now being shown what to date constituted the proverbial ‘elephant in the room’. When Masoud Barzani, the former Kurdish president, held a referendum on an independent Kurdistan in 2017, more than a few warned him that his neighbours Iran and Turkey would never accept a Kurdish state on their doorstep.

But Barzani let his Kurds vote and received over 90 percent approval with a high turnout.

His goal was not only to make an independent state out of the existing autonomous areas. He wanted more. Areas that had been under the administration of Baghdad until then were also to belong to the new state, as was the region in northern Syria, called Rojava, currently under Kurdish control.

Nothing came of it, opposition to the idea was too great. Even the Americans, traditionally allied with the Kurds in northern Iraq, rejected the prospect of a Kurdistan detached from the rest of Iraq. The current military operations by Turkey and Iran should therefore also be seen as a lesson for the Iraqi Kurds, reminding them of ‘what could happen if’.

Young women are driving forward the protests against the Iranian regime, which have been going on for months. Literature provides clues as to why that should be, and why the ... END_OF_DOCUMENT_TOKEN_TO_BE_REPLACED

Visiting the country of her parents, murdered by the Iranian regime in 1998, German-Iranian artist Parastou Forouhar finds a changed society: hopeful, strong and courageous, ... END_OF_DOCUMENT_TOKEN_TO_BE_REPLACED

Ballet performances are prohibited in Iran. In her film "1001 Nights Apart", director Sarvnaz Alambeigi documents the history of dance in the Islamic Republic. By Fahimeh Farsaie END_OF_DOCUMENT_TOKEN_TO_BE_REPLACED

Iran's president Ebrahim Raisi is overseeing an unyielding crackdown. The current situation grimly echoes his role in a purge of political prisoners in 1988 END_OF_DOCUMENT_TOKEN_TO_BE_REPLACED

Chinese President Xi Jinping's visit to Saudi Arabia in December 2022 may have rattled Washington, but it simply highlighted the Arabs’ desire to diversify their foreign relations ... END_OF_DOCUMENT_TOKEN_TO_BE_REPLACED

There are signs of an imminent normalisation of relations between Turkey and Syria. This would allow Erdogan to score political points domestically before the upcoming elections ... END_OF_DOCUMENT_TOKEN_TO_BE_REPLACED
Author:
Birgit Svensson
Date:
Mail:
Send via mail

END_OF_DOCUMENT_TOKEN_TO_BE_REPLACED
Social media
and networks
Subscribe to our
newsletter