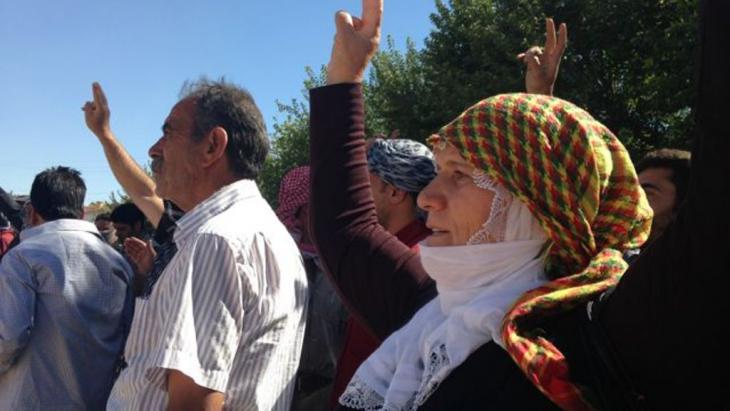 Turkey, IS and the Kurds
Powder keg on the Turkish-Syrian border

More than 200,000 people from Kobani have fled the IS onslaught and sought refuge in Turkey. But as the days pass, anger and frustration at what they see as Turkish inactivity is growing. More and more Kurds, from both Syria and Turkey, are now considering taking up arms not only against IS but also against Turkey should Kobani fall. By Kiran Nazish in Mursitpinar, Turkey

In front of a row of idle Turkish military installations right on top of a hill, Arsalan Mehmoud, a Syrian Kurd from Kobani, comes every day to watch white smoke billow over his home-town. The sound of IS using anti-aircraft artillery to target US airplanes, frequent shelling and bombs hitting his neighbourhood a few kilometres away have swollen his agitation. This hill in Mursitpinar has become a popular spot for Kurdish refugees and Turkish Kurds, who watched from the Turkish side as the fighting between Kurds and IS intensified.

More than 200,000 residents of Kobani have fled across the border from Syria in recent weeks. Now scattered throughout the country, many Syrian Kurds have been calling on the international community, the US and the Turkish government to help their brothers fighting IS in Kobani. For them, the fight in Kobani is not just a fight against Islamic State but also their own existential battle. If Kobani falls, part of their Kurdish identity and heritage will be stolen from them.

It's been two weeks since Arsalan came to Turkey with his family, who are living in refugee camps in Suruc, a nearby town. As the weeks go by, Arsalan's patience and pleas are turning into anger and revulsion. In Kobani he was a school teacher, never affiliated with a political group or campaign, he says, "but now I am startled to see how cruel the Turkish military can be, hundreds of these soldiers, watching over, every day. I would feel no guilt to fight them, and wake them up from their slumber." 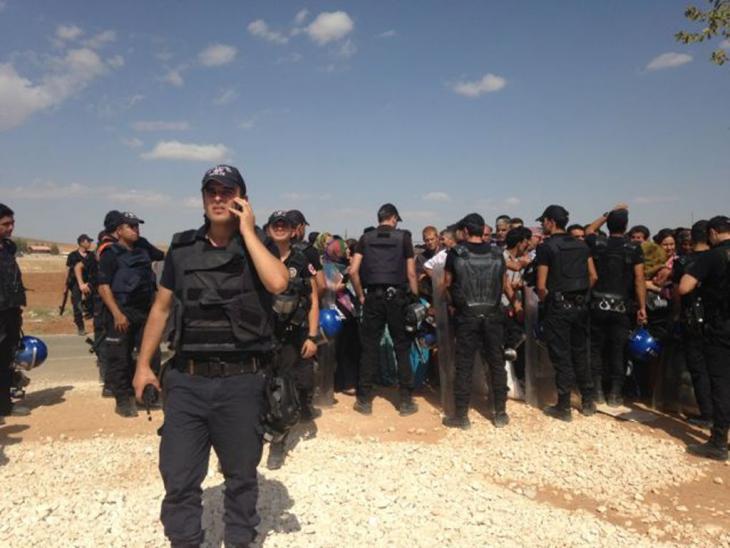 Turkey has stepped up security in the border region, using tear gas and water cannons to disperse gatherings, closely checking the belongings of all refugees entering the country, and keeping a tight rein on those entering and leaving refugee camps

The past two weeks have changed Arsalan's mind, he says. "I used to tell my students to never fight with their physical body and be peaceful, but now, witnessing such negligence from Turkey and the world, I am questioning my own moral values. Maybe we do need to fight for our rights and our people. Otherwise we will be alone." He is now contemplating taking up the arms offered to him by some Kurdish political groups, ready to fight Turkey should his home-town of Kobani fall.

Arsalan and other Kurds from Kobani are not alone. Hundreds of Turkish Kurds are travelling towards the border to join Kurdish political groups like the YPG in Suruc, Mursitpinar and Diyarbakir to organise a solid support system for each other. Many of them are there to assist the refugees. Dozens of them left for Kobani in the past week to help their Kurdish brothers fight Daesh or IS.

In Diyarbakir, the capital of Kurds in Turkey, locals have experienced some very violent and debilitating days as protestors came out on the streets in the past week. According to Turkish media, at least 31 have been killed, 10 of whom were from Diyarbakir alone. The Turkish government eventually imposed a curfew and arrested many involved in the Kurdish retaliation in Diyarbakir and other cities.

"We are disappointed with Turkey's neglect, but not surprised," said Feisel Ardem, 34, an electrical engineer from Ankara. Mr Ardem came to Diyarbakir with a group of more than hundred young men from different cities. "I have left my family and children back in Ankara to join my brothers here to organise against Turkish forces on the border. If we lose Kobani, it will be because of them and, we will go to war with Turkey." 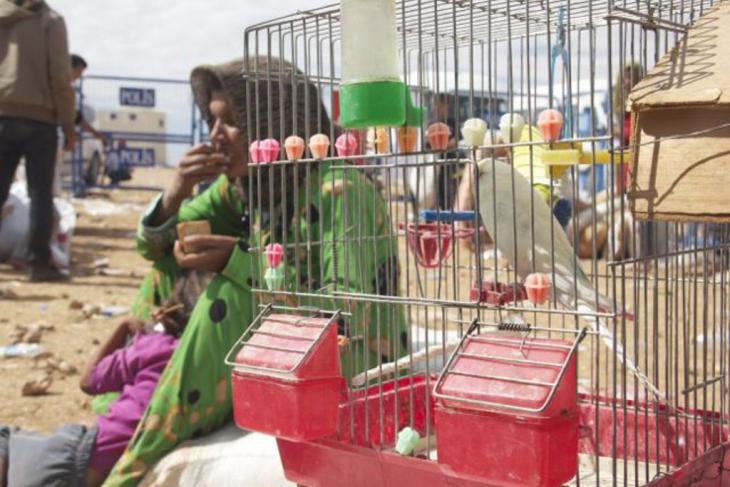 With all their worldly goods: a refugee woman and her child sit beside a bird cage in Yumurtalik waiting to be transferred to a refugee camp. So far, 1.5 million people have fled across the border from Syria into Turkey

But while Turkish and Syrian Kurds call for "war against Turkey" should Kobani fall, it seems that the Turkish military is improvising. "They want to make sure that the Kurds cannot organise against Turkey in any way," said Khaled Atallah, a doctor who has been at the border helping incoming refugees since the beginning of the conflict.

Security inside the Turkish border has been stepped up, with the Turkish forces showing intolerance towards both media covering the situation and other Kurds inside Turkey, usually dispersing any gatherings or groups with the frequent use of tear gas and water cannons.

"The use of tear gas and water cannons is getting excessive. It's unnecessary to hit civilians and refugees while they are watching their city fall," said Mehmet Emin, a local Turkish journalist covering the region. Tear gas has also been used to disperse peaceful demonstrations at or near refugee camps in Mursitpinar. Many refugees, females and old men, have been admitted to the hospital in Suruc for injuries received in stampedes. "They should use these techniques only when the situation is out of control, not at peaceful protestors," added Mr Emin.

Checkpoints have doubled in recent weeks as the Turkish military limits public access to the border region. "Only media and local villagers" are permitted to enter the border area, one police officer told Qantara.de.

Turkish police at the border at Yumurtalik have also been searching refugees entering from Syria. Luggage, bags, food items and appliances are searched intensively. Refugees are required to take their shoes off, men and women are body searched and transferred to refugee camps, watched closely by Turkish security forces. In some camps near the border, refugees are not allowed to leave the camp, and journalists are not allowed to enter. "We are suspicious, they (refugees) might bring weapons or associate with elements harmful to our country. We don't know them but we are giving them a home here," one senior police official told Qantara.de.

The fear of a massacre

Staffan de Mistura, the UN envoy for Syria, said on Friday that 12,000 civilians still left in Kobani, including 700 senior citizens, "will most likely be massacred" by IS militants if it falls. Kobani was "literally surrounded" except for one narrow entry and exit point to the border, de Mistura said. The offensive by IS to take over Kobani was launched in mid-September. Fighting has killed a reported 500 people and forced 200,000 others to flee into Turkey.

Turkey, which has the second largest military in NATO, has been extensively criticised for its reluctance to save Kobani from IS. Notwithstanding increased pressure from the United States, Turkey has refused to deploy its military in Kobani against Islamic State or to open the border to help Kurdish fighters access supplies and weapons. It will, however, allow its land to be used as base for American and coalition troops within 100 miles of the Syrian border, mainly for operations against Islamic State in Syria.

In a phone interview with Qantara.de from inside Kobani, the defence chief of the YPG in Kobani, Esmet Shiekh Hasan, said, "We are losing Kobani, and Turkey is watching this happen. This shows that Turkey has deliberately failed the peace process we [the Kurds] initiated." He went on to say that the US airstrikes "have not been helpful" either and that the Kurds in Syria and Turkey are alarmed by the lack of assistance they have received from the international community. He warned that if a conflict breaks out inside Turkey, the Kurds should not be blamed for it. 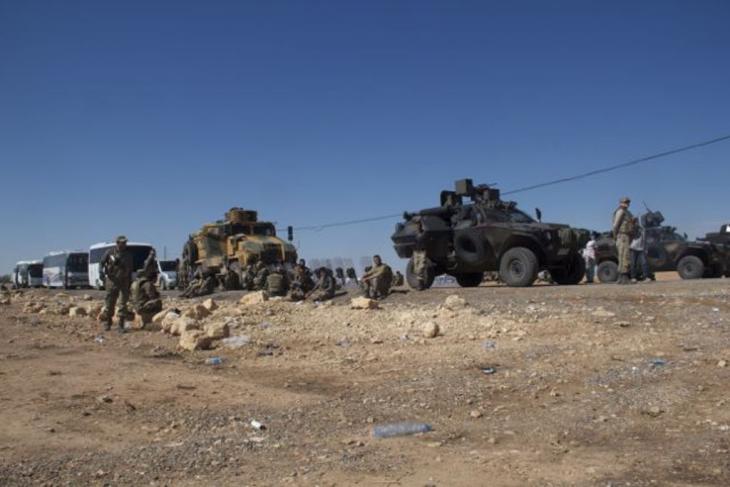 "For Turkey, helping the Kurds in Kobani would mean encouraging the Kurdish struggle, which it has been resisting for several decades. It would mean helping the PKK, which has fought an insurgency against Turkey for three decades," writes Kiran Nazish

For Turkey, helping the Kurds in Kobani would mean encouraging the Kurdish struggle, which it has been resisting for several decades. It would mean helping the PKK (Kurdistan Workers' Party), which has fought an insurgency against Turkey for three decades, claiming more than 30,000 lives, and is officially listed as a terrorist organisation by the United States and the European Union. The PKK along with the YPG (People's Protection Units, an affiliate of the PKK) and other Kurdish groups that have sprung up in the region have been at the heart of the Kurdish resistance in Kobani. This has made Turkey and the US reluctant to help even innocent civilians from the town of Kobani. Turkey's President Recep Tayyip Erdogan recently told reporters, "The PKK and IS are the same for Turkey. It is wrong to view them differently. We need to deal with them jointly."

Turkey is more interested in fighting Assad's regime. Indeed, many critics say that Turkey believes IS is in fact a great tool for fighting Assad in Syria. The US, on the other hand, has shown determination to quell the tough fight in the besieged town of Kobani. Coalition airstrikes recently destroyed an IS convoy on its way to support the jihadist fighters in Kobani. Speaking to Qantara.de, Idris Nassan, a spokesman for the Kobani resistance, said "We need more airstrikes", adding that although Kurdish fighters in Kobani have been putting up a good fight against IS, they wont be able to hold out for too long. "We need more weapons and ammunition."

For Arsalan, and others pledging to join the political struggle of the Kurds, it seems the fight will continue well after Kobani.

A lot is happening in Syria’s Sweida Governorate – foreign intervention there is unprecedented both in terms of scale and number of actors – yet Damascus remains the dominant ... END_OF_DOCUMENT_TOKEN_TO_BE_REPLACED

When she ascended the throne, millions of Muslims still lived under British rule. Later, Elizabeth II appealed for tolerance in a multi-religious society. She was the first ... END_OF_DOCUMENT_TOKEN_TO_BE_REPLACED

The documentary "The Other Side of the River" shows how women in the Kurdish regions of northern Syria fight for their rights under the most difficult conditions. By Aviva ... END_OF_DOCUMENT_TOKEN_TO_BE_REPLACED

Following months spent considering a military incursion into northern Syria, Turkey now appears to want talks with Syria to ensure security and the return of refugees. From ... END_OF_DOCUMENT_TOKEN_TO_BE_REPLACED

In this essay, renowned Lebanese journalist and writer Hazem Saghieh asks whether the Arab Levant, which stretches from Iraq in the east to Egypt in the west, will remain an ... END_OF_DOCUMENT_TOKEN_TO_BE_REPLACED
Author:
Kiran Nazish
Date:
Mail:
Send via mail

END_OF_DOCUMENT_TOKEN_TO_BE_REPLACED
Social media
and networks
Subscribe to our
newsletter