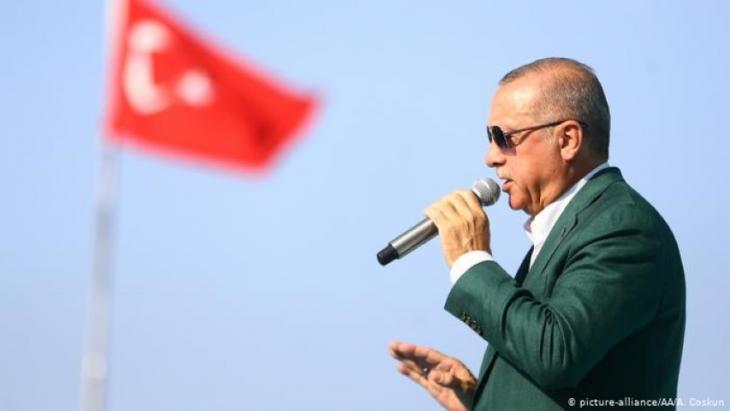 Most Turkish citizens approve – to a greater or lesser extent – of their countryˈs incursion into Syria and are deeply irritated by the Westˈs apparent incomprehension of the situation on Turkeyˈs southern border. By Ayse Karabat

For some Turkish citizens, hearing Erdoganˈs Operation Peace Spring being perceived as an act of aggression and labelled as an invasion by Western and Arab League observers has proved deeply frustrating. Because for them, it was an anti-terror campaign that had to be carried out.

The Turkish army began its incursion into northern Syria, together with Turkish-backed Syrian groups, on 9 October, saying it wanted to establish a ʺsafe zoneʺ, clear the border of the People’s Protection Units (YPG) and pave way for the return of millions of Syrian refugees. The operation was paused eight days later, all the while receiving support from, or at least the approval of, the majority of Turkish society, as noted by many observers.

One of those observers, political scientist Professor Tanju Tosun was at pains to emphasise that no empirical data existed to measure this approval or the level of it, but the dominant sentiment indicated that there was ongoing public support. "The operation has had something of a calming effect on domestic politics. There has been a break in the polarisation and tension between the government and opposition," he told Qantara.

Despite their criticism of the AK Party’s foreign policy, Tosun continued, the main opposition Republican People’s Party (CHP) and nationalist IYI Party preferred to throw their support behind the ruling Justice and Development Party (AK Party) over national interests.

ʺThere may well be differences in opinion, however, between the party functionaries and grassroots voters. It is also likely that the centre-right and the centre-left of Turkey do not support the operation at the same level and to the same extent. I think the more liberal segments of Turkish society who are more connected with the outer world view the issue from an international law and relations perspective, while the more nationalist elements tend to be more supportive,” Tosun said.

You may also like: Not-so-splendid isolation – Erdogan's geopolitical nightmare

He pointed out that the Peoples’ Democratic Party (HDP), which draws most of its support from the Kurdish-majority areas of Turkey, was the only political party represented in parliament to come out against the operation. Accused of ʺmaking propaganda for a terrorist organisationʺ and ʺopenly degrading the Turkish Republic,ʺ HDP co-chairs Sezai Temelli and Pervin Buldan are already under investigation for their open criticism of Peace Spring.

They are not the only ones. Turkish police have launched legal action against more than 100 people for ʺinciting hatred through a smear campaignʺ, including the editors-in-chief of two separate opposition media outlets and Sezgin Tanrikulu, a CHP deputy and former head of Diyarbakirˈs bar association.

Meanwhile, the head of the Turkish Bar Association, Metin Feyzioglu, has come under fire from some of his colleagues for comments he made on a TV show referring to Turkeyˈs incursion. He asserted that if a state is under attack by a group that is using civilians as human shields, the state does not have a responsibility to protect the lives of those civilians.

The devaluation of the Egyptian pound combined with rising food prices is taking its toll on Egypt. More and more people are slipping into poverty. Karim El-Gawhary reports from ... END_OF_DOCUMENT_TOKEN_TO_BE_REPLACED

Since returning to power in Afghanistan, the Taliban have steadily eroded the rights and opportunities of women and girls, particularly their access to education. But Afghans are ... END_OF_DOCUMENT_TOKEN_TO_BE_REPLACED

The book "The Invention of the Maghreb: between Africa and the Middle East" prompts us to review basic terminology. This includes terms that we use almost every day as if they are ... END_OF_DOCUMENT_TOKEN_TO_BE_REPLACED

Tunisia has been going through a severe economic and political crisis in recent years. More than one in three young people there are unemployed. For many skilled, qualified and ... END_OF_DOCUMENT_TOKEN_TO_BE_REPLACED

At the end of every year, the team at Qantara.de gives you a run-down of the ten most-read articles on the site over the past 12 months. Here is a quick overview of the stories ... END_OF_DOCUMENT_TOKEN_TO_BE_REPLACED

The government in the Netherlands, one of the last European nations to abolish slavery, has made an historic apology. But some feel that there is still a long way to go. By Ella ... END_OF_DOCUMENT_TOKEN_TO_BE_REPLACED
Author:
Ayşe Karabat
Date:
Mail:
Send via mail

END_OF_DOCUMENT_TOKEN_TO_BE_REPLACED
Social media
and networks
Subscribe to our
newsletter