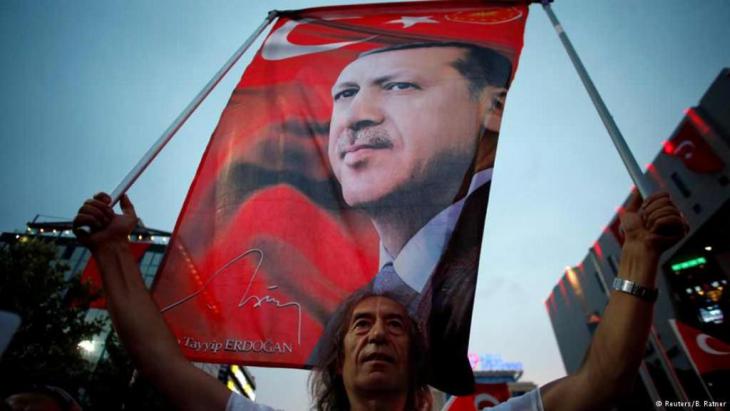 In times of paranoia

Many observers believe that Erdogan can now live out his omnipotence fantasies without impediment. But the deep split through the state apparatus will not make it easy for him to govern. And the paranoia of the Turkish President is resulting in irrational decisions, says Omer Erzeren

The history of Turkey bristles with successful military coups. And the instigators were always generals who presented themselves as guardians of Kemalism and nationalism. Then, political parties were banned and presidents, prime ministers and ministers put on trial. Monstrously repressive measures were then taken against the purported enemies of the state: Kurdish, left wing and Islamist political movements. But there were extensive sections of the state apparatus that even the coup leaders did not mess with: judges, public prosecutors and bureaucrats remained in office and served the military.

The 15 July coup was not successful; it was crushed. The detention and dismissal of officers is to be expected. But why is the order being issued to detain almost 3,000 judges and public prosecutors? Why are 8,000 police officers being suspended from duty? Why 1,500 finance ministry officials? And 257 executive staff at the prime ministerial office?

At the education ministry – and this is not a joke – 15,000 employees have been sacked. This figure does not even include the 21,000 teachers from private schools who have been stripped of their teaching licences. Hundreds of civil servants from the family ministry have also been suspended for suspected involvement in the putsch. Three days after the military coup, the total number of suspensions from public service is 49,000. This requires explanation.

State apparatus at the mercy of Erdogan

The Party for Justice and Development or AKP has governed Turkey for more than 15 years. True to his autocratic style, Recep Tayyip Erdogan hates nothing more than independent institutions.

The entire state apparatus was suffused with apparent henchmen. Erdogan was never squeamish when it came to sacking civil servants. Amendments to the constitution in the year 2010 were for the sole purpose of bringing judges and public prosecutors to heel in the political sense. Those judges and public prosecutors who rose through the ranks to senior positions within the judiciary after the referendum on the constitution enjoyed – with Erdogan covering their backs politically – the freedom to do exactly as they liked. On the other hand, thousands of Kurdish local politicians were locked up for allegedly supporting the PKK. Journalists and critical voices were pursued as alleged members of "terrorist organisations".

Erdogan's political justice landed its biggest coup with the army. Senior figures within the Turkish military, generals and even the chief of staff were accused of carrying out an attempted coup and "membership of a terrorist organisation", sentenced and spent years in jail. The evidence – email correspondence and documents – had been fabricated by both police and public prosecutors.

Many of the successors in the judicial, police and military apparatus were followers of the cleric Fethullah Gulen, who lives in the US state of Pennsylvania, a man who has built up a huge network of loyal supporters over a period of decades. Supported by thousands of private schools – the ideal place for the selection of future cadres – Gulen built up a network of academics who were systematically placed in key public positions.

Gulen's followers focused their attentions in particular on the police intelligence service and public prosecutors. These days, Gulen is an ostracised figure described by Erdogan as a "terror head". Just a few years ago, the cleric was his close ally. Erdogan once said to Gulen: "We're giving you everything you ask us for." It was considered good form that ministers from Erdogan's cabinet made the trip to Pennsylvania to kiss Gulen's hand.

Home
Print
Newsletter
More on this topic
Turkey and the failed coup: God′s gift to ErdoganPutsch aftermath in Turkey: Autocracy or military dictatorship?The Gülen Movement: Erdoğan Is Not Turkey's Only Problem
Related Topics
Democracy and civil society, History of the Near and Middle East, Islam and democracy, Justice and Development party (Turkey), Kemalism, Kurds, Recep Tayyip Erdogan, Rule of law
All Topics

At least 150 theatre professionals were recently fired without reason in Turkey, just days before they were expecting to receive permanent contracts. Creatives accuse the ... END_OF_DOCUMENT_TOKEN_TO_BE_REPLACED

Political analyst Taqadum al-Khatib argues that Egypt can, in co-ordination with its European partners, develop a common vision to solve the complex conflict in Libya. For this to ... END_OF_DOCUMENT_TOKEN_TO_BE_REPLACED

Turkey's President Erdogan wants to create a second Bosphorus. The cost to the economy and environment would be enormous – and that's why Istanbul's mayor is attempting to stop ... END_OF_DOCUMENT_TOKEN_TO_BE_REPLACED

Libya is in turmoil and no political solution is in sight. The EU's inability to take concerted action in the country, meanwhile, is being exploited by third parties, such as ... END_OF_DOCUMENT_TOKEN_TO_BE_REPLACED

Taking the Fridays for Future movement as his starting point, Muslim environmental expert Tarik Quadir talks to Marian Brehmer about the connections between Islam and ... END_OF_DOCUMENT_TOKEN_TO_BE_REPLACED

There are only a few thousand Aramaic Christians left in south eastern Anatolia. And they are intent on preserving their ancient culture dating back one-and-a-half millennia. ... END_OF_DOCUMENT_TOKEN_TO_BE_REPLACED
Author:
Ömer Erzeren
Date:
Mail:
Send via mail