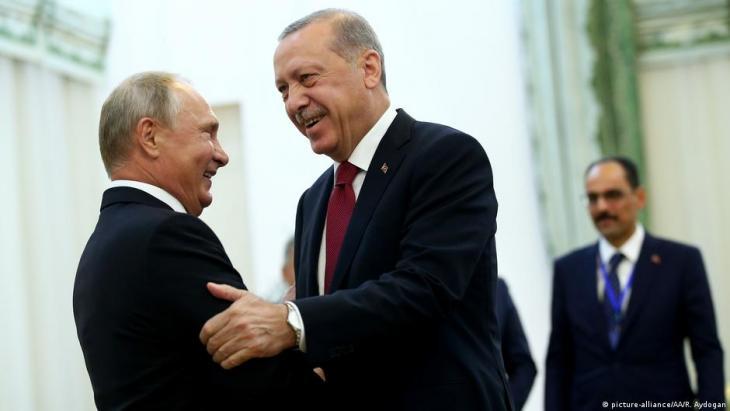 Turkey-Syria-Russia relations
Is Erdogan planning a deal with Assad?

There are signs of an imminent normalisation of relations between Turkey and Syria. This would allow Erdogan to score political points domestically before the upcoming elections in Turkey. It would also be opportune for Putin. By Ronald Meinardus

Experts on current Turkish politics all agree on one important point: President Erdogan's foreign policy agenda is determined largely by domestic considerations. This is especially true of Ankara's policy towards its neighbour Syria. More than any other foreign policy issue, that Arab state is taking centre stage these days in the election campaign in Turkey.

The pre-eminent importance of Syria for Turkish policy is nothing new for Erdoğan, but rather a constant of his 20-year rule, first as prime minister, then as president, argues Gönül Tol in her new book Erdoğan's War: A Strongman's Struggle at Home and in Syria (Hurst and Co. Publishers, 2022). Tol demonstrates in her 300-page work that Erdogan's foreign policy "has been first and foremost about his domestic strategy to keep his grip on the country", going on to specify that "Syria occupied a unique place in Erdogan's struggle to tighten his grip on the country."

Central national interests have always been at stake for Turkey in its dealings with Syria. Today, for example, the focus is on the Syrian Kurds, who have set up a successful autonomous administration in the north of the country along its border with Turkey. Ankara sees this as a continuation of PKK policy under a different name.

Another major topic is the 3.6 million Syrian refugees who have found a new home in Turkey in the course of the Syrian civil war. Little remains of the initial "welcome culture" in Turkey. A majority of Turks would like to see the Syrians return across the border sooner rather than later. Xenophobic attacks are on the rise, and sections of the opposition are fuelling the mood with partly racist slogans. The refugee question has thus become an explosive election issue – putting the government under pressure to take action. 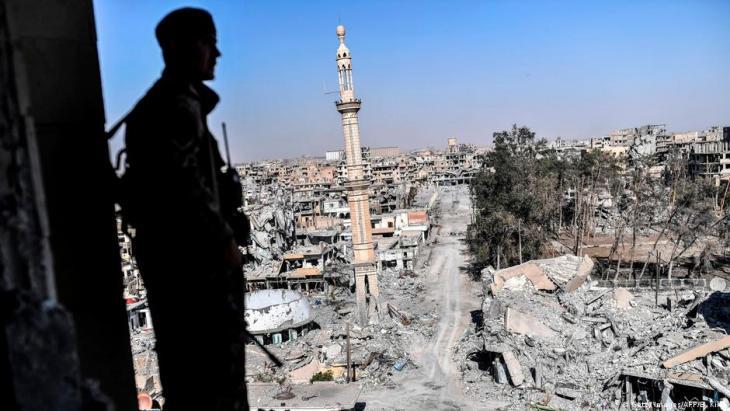 "It is to be feared that the Kurds, who have placed their faith in the Americans and are standing by Washington in the fight against the Islamic State (IS) in Syria, will once again be the big losers should the plans being made by Putin, Erdoğan and Assad be implemented," writes Ronald Meinardus. Pictured here: a fighter looks out over the devastated city of Raqqa in Syria after it was re-taken from IS by Kurdish militias

Meanwhile, there are growing indications that what can only be described as a radical U-turn in Turkey's policy on Syria is in the offing. Early in the new year, President Erdogan spoke once again – more plainly than he had previously done – about the possibility of a summit meeting with Syrian dictator Assad. Such a meeting would be the culmination of a process that Moscow has been driving behind the scenes for months with the aim of normalising relations between Ankara and Damascus. "We have launched a process as Russia-Turkey-Syria," the Turkish president said of the mutual plans. "We will bring our foreign ministers together and then, depending on developments, we will come together as leaders."

Erdogan's statement was preceded by a meeting of the defence ministers of the three countries in Moscow shortly before the turn of the year at which – according to reports – important procedural matters were clarified under the aegis of Russia, and the prospect of a summit meeting between Erdogan and the Syrian dictator Assad was then publicly communicated.

Given the complete breakdown of bilateral relations between Ankara and Damascus during the Syrian civil war, the considerable diplomatic drama of a tete-a-tete at the highest political level is clear. The last time a leading member of the Turkish government met with Assad was more than 11 years ago. In the meantime, Turkey has become the main supporter of the Syrian opposition and at times the springboard for Assad's armed opponents.

Russia for its part remains the most important mainstay of the regime in Damascus. This circumstance alone explains why Putin is so interested in a Syrian-Turkish settlement.

A potential political triumph for Putin

A summit between Assad and Erdogan would be a political triumph for Putin and a defeat for the Americans. But it is not only Moscow and Washington that are vying for power and influence in Syria: a central role in international Syrian diplomacy is also played by the United Arab Emirates, which is itself working towards normalising relations with Assad. The rulers in Abu Dhabi believe that gradually bringing the regime in Syria out of its far-reaching political and diplomatic isolation would help to check Iran's growing influence in Damascus. 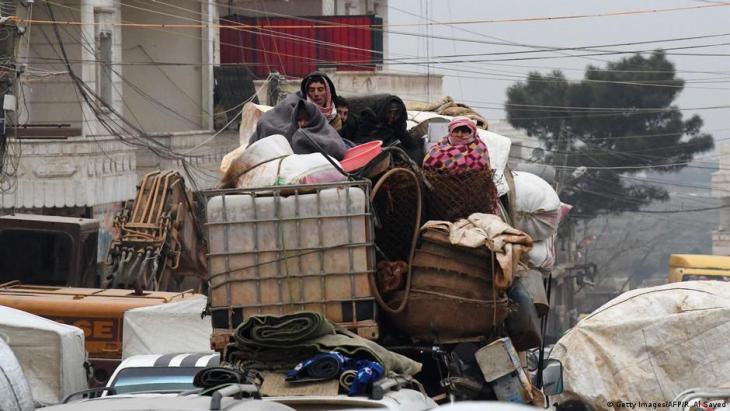 What would a normalisation of relations between Turkey and Syria mean for the people of Syria? In Ronald Meinardus' opinion, "it would be nothing short of a miracle if Moscow's Syria initiative were to bring the battered country closer to a peace supported by all sides." Pictured here: people fleeing Idlib in north-western Syria in 2020

As a clear demonstration that the Emiratis are at the forefront of diplomacy with Syria, UAE Foreign Minister Abdullah bin Zayed Al-Nahyan paid a visit to Damascus at the beginning of this year, after already undertaking an official mission to Syria in November 2021. Between these two visits, the Emirates received the Syrian dictator in person for an official visit to the Gulf.

Concern about Tehran's growing influence is also shaping Israel's policy toward Syria. The Israeli air force has repeatedly flown attacks against suspected Iranian targets there, most recently at the start of the new year, when Damascus International Airport once again ended up in the crosshairs. Prime Minister Benjamin Netanyahu has confirmed that his government will maintain its military policy towards the neighbouring country, saying that Israel "will also take vigorous action to prevent the Iranian military entrenchment in Syria and elsewhere and we will not wait".

A special kind of trade-off

While there is no end in sight for Israel's military incursions on targets in Syria, things may soon look different on the Turkish-Syrian front. According to media reports, the political basis for an upcoming agreement between the two countries is a trade-off of a very special kind.

In return for Ankara's recognition of Assad as ruler of Syria and the normalisation of bilateral relations at all levels, Damascus is apparently ready to commit to dismantling Kurdish structures in northern Syria and ensuring that they will play no role in future peace negotiations.

It remains to be seen how the USA, the key ally of Syria's Kurds, will react to the latest developments. So far, Washington has indicated only that it rejects the normalisation of relations with Assad. "We will not normalise and we do not support other countries normalising relations with the Assad regime," was the statement made by the spokesperson for US Secretary of State Ned Price on the current status of the Moscow–Ankara–Damascus triangle. 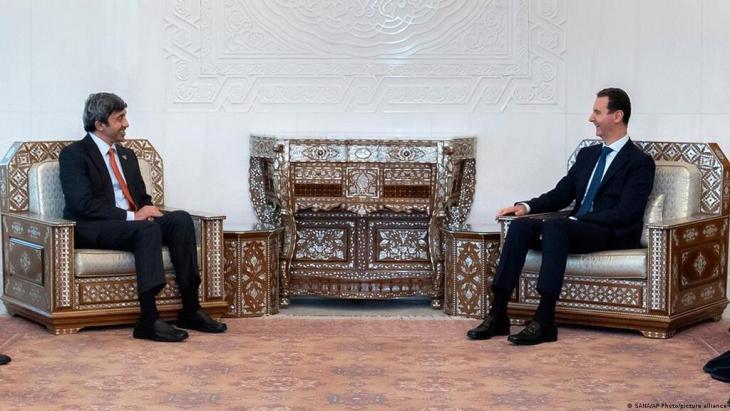 UAE Foreign Minister Sheikh Abdullah bin Zayed Al-Nahyan met Syrian President Bashar al-Assad in Damascus in November 2021. The rulers in Abu Dhabi believe that gradually bringing the regime in Syria out of its isolation would help to check Iran's growing influence in Damascus

Obviously, Washington's stance has not made much of an impression in Ankara. When it comes to Syria, Erdogan listens to Putin and not Biden, that much is certain.

It is to be feared that the Kurds, who have placed their faith in the Americans and are standing by Washington in the fight against the Islamic State (IS) in Syria, will once again be the big losers should the plans being made by Putin, Erdogan and Assad be implemented.

For Erdogan, whose decisions are increasingly being driven by poor polling results, the deal with the Syrian dictator could possibly be the key to success at the ballot box. Polls show that Syrian refugees are the second most important issue for voters, right after the economic crisis. The opposition has declared that, should it win the elections, it would quickly dispatch the Syrian refugees back across the border. A political agreement that stipulates just such a repatriation, along with a treaty spelling the end of the Kurdish militias in the border area, would be a political godsend for Erdogan.

The media he controls would celebrate the president, who fears losing his grip on power, as a great and successful strategist who managed to solve the dual problems of the Kurds and immigration without having to resort to the oft-threatened military operation with ground troops in northern Syria.

It is striking that all parties involved are emphasising their efforts to find a peaceful solution. But the personal histories of the three key figures involved call for caution, as Assad, Erdogan and Putin have thus far made a name for themselves mainly as warmongers. It would be nothing short of a miracle if Moscow's Syria initiative were to bring the battered country closer to a peace supported by all sides.

Short movies nominated for an Oscar often don't get wide public attention. But when one is about an Iranian girl seeking freedom from male domination by taking off her veil, ... END_OF_DOCUMENT_TOKEN_TO_BE_REPLACED

World-famous Iranian film director Jafar Panahi has been incarcerated for several months, even though Iran's Supreme Court overturned the verdict against him. Now, he has gone on ... END_OF_DOCUMENT_TOKEN_TO_BE_REPLACED

Young women are driving forward the protests against the Iranian regime, which have been going on for months. Literature provides clues as to why that should be, and why the ... END_OF_DOCUMENT_TOKEN_TO_BE_REPLACED

Visiting the country of her parents, murdered by the Iranian regime in 1998, German-Iranian artist Parastou Forouhar finds a changed society: hopeful, strong and courageous, ... END_OF_DOCUMENT_TOKEN_TO_BE_REPLACED

Ballet performances are prohibited in Iran. In her film "1001 Nights Apart", director Sarvnaz Alambeigi documents the history of dance in the Islamic Republic. By Fahimeh Farsaie END_OF_DOCUMENT_TOKEN_TO_BE_REPLACED

END_OF_DOCUMENT_TOKEN_TO_BE_REPLACED
Social media
and networks
Subscribe to our
newsletter