As Turkey looks set to receive official EU blessing to start negotiating membership, Prime Minister Erdogan got a warm reception when he visited Germany, Turkey's major ally in its quest for accession. By Uwe Hessler

Sunday was a successful day for the Turkish prime minister. In Berlin, the chancellor presented him with the German "Quadriga Bridges of Respect" award given by the privately-funded Werkstatt Deutschland for outstanding contributions to European unity.

Hailing Erdogan as "a great reformer," Schröder said the award was "a consequence of his political convictions and also of his painful personal experiences with repression and persecution" - a reference to the four months Erdogan spent in jail for breaching Turkey's strict secular rules.

Even more exciting for the Turkish leader was the news that the EU Commission would be recommending the start of accession negotiations with the Muslim country. The report is due to be officially published Wednesday, but it has transpired that the Commission believes the political criteria are fulfilled and recommends opening membership talks with Turkey.

However, any euphoria was tempered by EU Enlargement Commissioner Günther Verheugen who reiterated his belief that Turkish membership was unlikely before 2015 at the earliest.

News of the report coincided with political talks in Berlin between Gerhard Schröder and the Turkish prime minister. Although both leaders refused to comment on the report, Gerhard Schröder didn't leave any doubt about his vote at an EU summit in December.

"If the criteria will have been met," he said, "Germany will vote in favor of accession talks with Turkey at the summit in December. But let me make sure once again that we are only talking about accession negotiations and nothing else."

Recep Tayyip Erdogan said he hoped Turkish membership in the EU would mean a reconciliation of civilizations. He once again insisted that he would only go for full EU membership and not make do with the "special relationship" proposed recently by Germany's conservative opposition leader Angela Merkel.

He also claimed that torture in his country was a thing of the past, while admitting that implementing the set of reforms adopted recently was indeed a challenging task.

"Changing laws doesn't resolve any problem" he pointed out. "Implementation is the decisive part and also the most daunting because it means shifting mentalities. But my government is determined and possesses the political will to carry through the implementation of the reforms to the end."

The Erdogan government has passed sweeping reforms to meet EU membership conditions - among them the abolition of the death penalty and granting greater cultural rights to the Kurdish minority. But the regular EU commission report also alleges that torture still persists and civil liberties such as freedom of expression, of association and of the press continue to be denied.

END_OF_DOCUMENT_TOKEN_TO_BE_REPLACED
Social media
and networks
Subscribe to our
newsletter 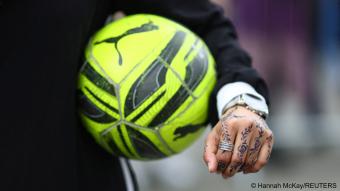