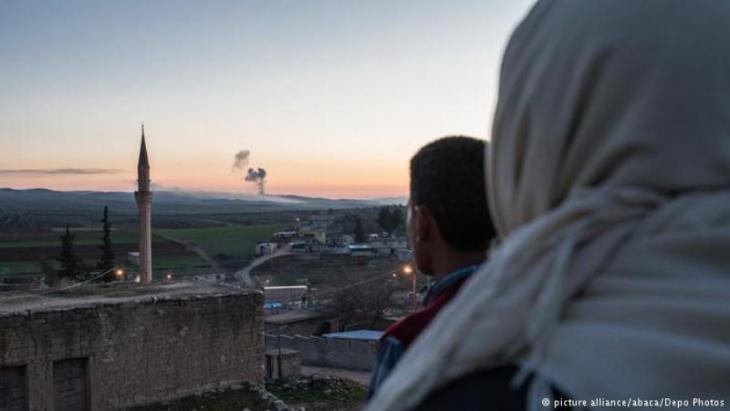 Although the presence of an armed group on Turkey′s border – especially one allied to the PKK – was inevitably going to be perceived as a threat, Ankara′s Afrin offensive has been given short shrift in Germany. Commentary by Ulrich von Schwerin

The Turkish military offensive against Syrian Kurds in Afrin has been met with criticism across the political spectrum in Germany; the sympathies of the media also clearly lie with the Kurds. All are of course fully entitled to criticise Turkey′s actions in Afrin, but those who simply disregard the country′s security concerns are over-simplifying the matter. After all, when an off-shoot of a rebel group digs itself in on Turkey's southern border, a group that has waged a bloody war against the state for three decades in southeastern Turkey, this does indeed constitute a threat.

Contrary to frequent misrepresentations of the situation in Germany, the Syrian-Kurdish Democratic Union Party (PYD) and its military arm, the People's Protection Units (YPG), are not just ideologically affiliated with the Kurdistan Workers' Party (PKK), they are also structurally and from a personnel point of view so closely linked that some observers even talk about an organic unit. The PYD was not just formed in 2003 as a Syrian PKK offshoot, but rather makes no secret of its proximity to the PKK today.

Pictures of PKK founder Abdullah Ocalan, a man still in Turkish detention, hang on the walls of PYD offices; Ocalan flags are flown at PYD rallies; and following the capture of the jihadist stronghold of Raqqa, his image was the first to be displayed by YPG fighters in the town centre. Journalists from Raqqa have also reported that within the command structures of the YPG, PKK fighters play a key role. Though it may be stretching the truth to claim the organisations are one and the same, the links between them are undeniable. 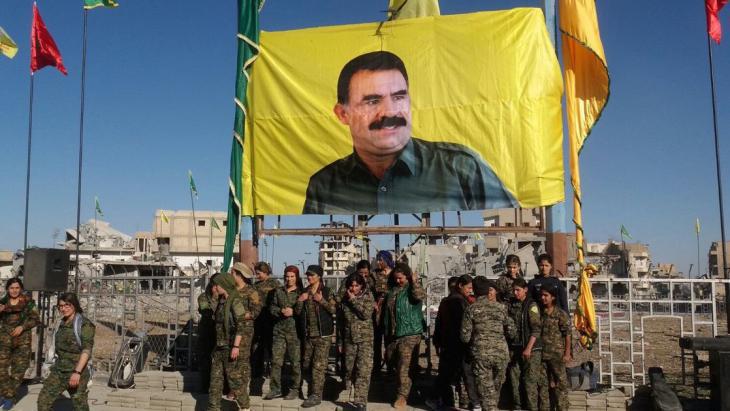 From the same political stable: when the IS stronghold of Raqqa fell, the first thing YPG fighters did was to hang up a banner of PKK founder Ocalan in the town centre. Journalists from Raqqa have also reported that within the command structures of the YPG, PKK fighters play a key role. Though it may be stretching the truth to claim the organisations are one and the same, the links between them are undeniable

To this day, the PKK is romanticised as a revolutionary liberation movement that fights for freedom, democracy and women’s rights – especially among certain sections of the German left wing. This disregards the fact that the PKK is a doctrinaire, authoritarian cadre party that understands violence and force as the method of choice. Its policies are based on polarisation and repression; those who do not support them are antagonised, internal opponents are eliminated, rival groups are persecuted, dissenters, leavers and alleged state collaborators are punished.

This violence is not only directed at soldiers and police officers, but at politicians and teachers as well. Civilian victims are accepted; state repression is part of the calculation to mobilise the Kurdish population. Its decision to take the war to urban areas in the autumn of 2015 pushed city inhabitants into the firing line. For a long time, the PKK totally rejected negotiations and during the failed peace talks of 2015, a section of the leadership dismissed a previous renunciation of violence.

Against this backdrop it is hardly surprising that the Turkish government is furious that the U.S. is providing weapons to the Syrian offshoot of this group in the fight against the jihadists. Only the very naive would believe that these weapons are not providing impetus to the PKK’s battle against Turkey. Turkey is especially angered by the fact that, even following victory over Islamic State (IS), the U.S. is holding fast to the controversial alliance and planning to deploy a 30,000-strong border protection force that includes YPG fighters.

The YPG – a friend of the West?

There is no doubt that the YPG militias are an important, highly indispensable ally in the fight against the jihadists, but does this make them a friend of the West? When the Syrian Kurds fought against IS, it wasn’t to do the West a favour, but rather to further their own interests. Their chief aim was to liberate their own towns and villages; they also brought large non-Kurdish regions under their control, which they will be able to use as a bargaining chip in negotiations over the post-war order. 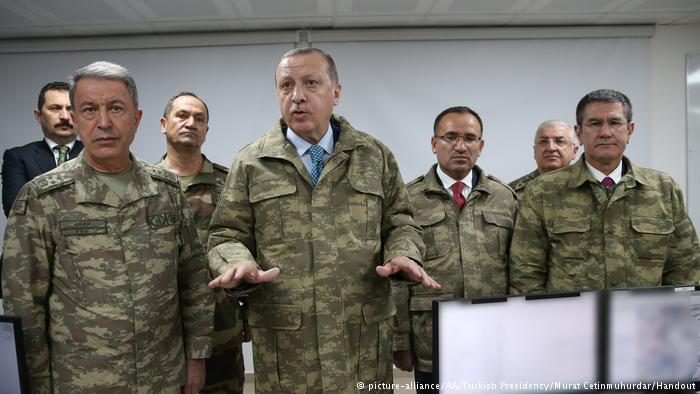 Expanding the combat zone: last week, Turkish President Recep Tayyip Erdogan announced that he would extend the Turkish offensive against the YPG militia in northern Syria along the entire border. This would mean deploying troops on Syrian soil up to the border with Iraq. ″Operation Olive Branch will continue until its aims have been achieved,″ said Erdogan

Understandably, Ankara is following these developments within the YPG with concern. For Turkey, it is difficult to accept that a PKK-offshoot is setting up quasi-public structures on its southern border and that it is being supported in its endeavours by the U.S., Turkey’s NATO partner. But despite all this, the Turkish offensive in Afrin is wrong.

Contrary to Ankara's claims, the Syrian region does not pose a serious threat to Turkey. For the PKK and the YPG, the development and safeguarding of their Syrian autonomy project has current priority over the fight against Turkey. Moreover, although Ankara may offer frequent assurances that its offensive is only targeting "terrorists", the civilian population is also being affected. This is all the more painful, as Afrin has thus far been largely spared from the violence that has ravaged the rest of Syria for years.

A conflict that can only be solved by political means

The offensive is also wrong, because despite its close associations with the PKK, the YPG has actually played a positive role in Syria. In contrast to the fragmented, quarrelling, Islamist-dominated opposition, it stands for stability and moderation. The Kurdish autonomy project in northern Syria can even serve as a model for the rest of the country. The current structures of the Kurdish cantons may only be of limited democratic and pluralistic value, but this form of self-administration is future-oriented. 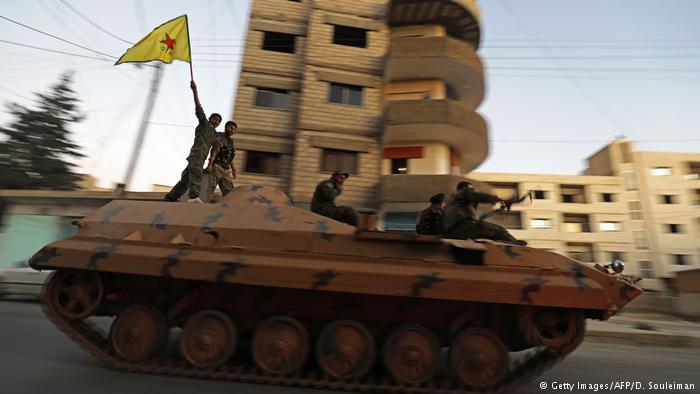 "If Turkey's actual goal is to bring Afrin and the other Kurdish cantons under its control, then it is destined to fail. The YPG militias are well-armed, experienced in battle and deeply rooted within the Kurdish population. But first and foremost the offensive is wrong, because Ankara is attempting a military solution to a conflict that can only be settled by political means," writes Ulrich von Schwerin

If Turkey's actual goal is to bring Afrin and the other Kurdish cantons under its control, then it is destined to fail. The YPG militias are well-armed, experienced in battle and deeply rooted within the Kurdish population.

But first and foremost the offensive is wrong, because Ankara is attempting a military solution to a conflict that can only be settled by political means. Without political and cultural concessions of the kind discussed during the peace process, the conflict with the PKK simply cannot be defused.

As long as Turkey relies on violence on the other hand, it should not be surprised if its own security interests are ignored. As long as its primary response to the legitimate striving of the Kurds for more self-determination is repression, it will be easy for the PKK to present itself as defenders of the Kurds and champions of freedom.

But if Ankara succeeds in settling the conflict with its own Kurdish population, it will no longer have anything to fear from autonomy aspirations beyond its borders.

Hundreds of porters, locally known as ‘kolbars’, cross the mountainous border between Iran and Iraqi Kurdistan all year round. With Iran’s economic crisis deepening, ever more ... END_OF_DOCUMENT_TOKEN_TO_BE_REPLACED

The Syrian conflict remains insoluble for the time being. Yet Europe could start managing it better. By reorganising humanitarian aid supplies, becoming more involved in the ... END_OF_DOCUMENT_TOKEN_TO_BE_REPLACED

Bachtyar Ali sends the hero of his latest novel – "Mein Onkel den der Wind mitnahm" – literally flying. Jamshid is so thin after his years as a political prisoner that a gust of ... END_OF_DOCUMENT_TOKEN_TO_BE_REPLACED

In this essay, renowned Lebanese journalist and writer Hazem Saghieh asks whether the Arab Levant, which stretches from Iraq in the east to Egypt in the west, will remain an ... END_OF_DOCUMENT_TOKEN_TO_BE_REPLACED

More and more voices are being raised in Turkey that challenge previous versions of the country's history. These alternative accounts, still largely ignored by official quarters, ... END_OF_DOCUMENT_TOKEN_TO_BE_REPLACED

Extreme drought in Iraq has given German and Kurdish archaeologists the unique chance to examine an ancient Bronze Age city that was hidden beneath the water of a reservoir for ... END_OF_DOCUMENT_TOKEN_TO_BE_REPLACED
Author:
Ulrich von Schwerin
Date:
Mail:
Send via mail

END_OF_DOCUMENT_TOKEN_TO_BE_REPLACED
Social media
and networks
Subscribe to our
newsletter