Driven out by economic hardship and discrimination at local and state level in the 1960s and by forced evacuations in the 1990s, Southeastern Turkey's Aramaeans are starting to return home, only to find that their ancestral lands no longer belong to them. Ayse Karabat reports 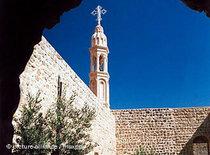 Dismay among Turkey's Aramaean minority: on 24 June 2009, a court in the city of Midyat declared the confiscation by the state of 27 hectares of land belonging to the Syriac Orthodox monastery of Mor Gabriel to be legal

​​Ruhet Ergül, a 24-year-old nurse from Germany, is delighted to be moving to her new home, a remote village in Southeastern Turkey. The village of Karagöl has only two buildings and is reachable only by a 30-minute journey along a track from Dargeçit, a district of the multi-cultural city of Mardin.

She is quick to explain a source of her happiness: "My child will be baptized in the same church as my father." The church she is talking about is approximately 1,600 years old and the village's inhabitants are currently working on its restoration. Their efforts are likely to bear fruit in time for the birth of Ergül's baby girl, due in just two months' time.

Ergül believes a shared cultural background is important for a marriage's success; in her case this meant finding a husband who was also Aramaean. Known too as Syriacs, the Aramaeans are a Christian community and use Aramaic, a Semitic language that dates back 3,000 years and was spoken by Jesus Christ.

She adds that she fell in love with her husband at first sight: "My family was from another Aramaean village, but they moved to Germany a long time ago. I was born there, raised there. I am a German citizen. When I was visiting here a couple of years ago, I met my husband. We lived in Germany for four years but decided to move to the village, at least for the time being."

The village was originally known as Derkube, an Aramaic name. However, as part of the state's Turkification efforts in the early 1950s its name was changed to Karagöl. Some five decades later, locals continue to use its former name.

The Renaming Specialized Committee was established in 1957 and until 1978 it examined the names of 75,000 settlements and geographical places, ultimately changing 28,000 of them. Most of these places were in Southeastern Anatolia and formerly had Kurdish, Arabic or Aramaic names. 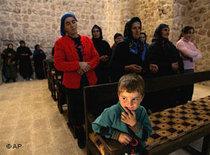 ​​As part of its ongoing "democratization initiative" attempt to solve the long-standing Kurdish question, the Turkish government recently signalled that the country's original place names might be restored. Aramaeans are also hoping to benefit from this expected change.

Johny Messo, president of the Syriac Universal Alliance (SUA) – a worldwide umbrella organization for all Syriac peoples and organizations – says they welcome this possible change with great enthusiasm.

According to Messo, there are no scientific statistics about the Aramaean population living in Iraq, Syria and Turkey, or the Aramaean diaspora, but estimates suggest that there are half a million in Europe and 25,000 in Istanbul, whereas only 3,500 remain in Southeastern Anatolia, which is called Turabdin by Aramaeans and was once home to many of this community.

Causes of the Aramaean exodus

There were many reasons for the Aramaeans' departure from Turkey and Turabdin. According to Messo, not only economic conditions but also persecution by other local ethnic groups and the denial of basic cultural rights by the state forced Aramaeans to emigrate en masse during the 1960s. 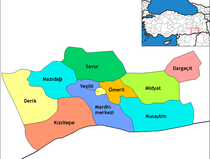 According to the chairman of the Syriac Universal Alliance, Johny Messo, approximately 3,500 Aramaeans live in Southeastern Turkey

​​During the 1990s there was another emigration wave of Turkish Aramaeans, as they, along with many others, fled the region for security reasons. At the time, the Southeast was the scene of heavy clashes between state security forces and the outlawed Kurdistan Workers' Party (PKK), listed as a terrorist organization by Turkey, the US and the EU. During that period, approximately 4,000 villages were evacuated – Karagöl among them.

"In the 1970s there were 20 families in the village, but many of them emigrated to Europe and only two families were left here. Then our village was burned down in 1995, and we had to move to another Aramaean village. But we got permission to return in 2001," says Hazni Ergül, Ruhet Ergül's father-in-law.

Ruhet Ergül, a member of the Turkish Aramaean diaspora returning to her ancestral homeland, and her in-laws, trying to re-build their lives after an involuntary rupture, are not unusual in their resettlement efforts. But going back is far from easy.

With the relative improvement in the security situation in the region, diaspora Aramaeans either decided to return or at least started to visit more frequently than before; but on their arrival they found their lands cultivated by the surrounding villages, the consequence of a revised cadastral survey. This situation led to several land disputes, many of which are now being challenged in court. Perhaps the best known of these disputes relates to the ancient Aramaean monastery of Mor Gabriel. 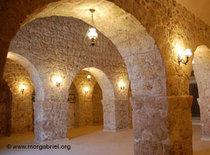 Four court cases have been brought against the monastery of Mor Gabriel by surrounding Kurdish villages and state authorities; the claims made by the villages were rejected by the court in May 2009

​​The row began when Turkish government land officials redrew the boundaries around Mor Gabriel and the surrounding villages in 2008 to update the national land registry as part of a cadastre modernization project in compliance with EU instructions. In less than five years, Turkey finished the cadastre work for almost half the country. In addition, some new laws were issued that required the transfer of uncultivated land to the Treasury, and in some cases rezoned other land, such as forest land, moving it into the jurisdiction of the Forestry Directorate. In the wake of the new classification, it became difficult for former owners to use the land.

SUA figures suggest that Mor Gabriel, the oldest active Aramaean monastery, is far from an exception: the alliance claims that – just like the monastery – at least 15 Aramaean villages are the subject of current or pending lawsuits against surrendering villages, the Treasury or the Forestry Directorate. Mor Gabriel was the subject of four court cases. It has won against the surrounding villages but lost against the Forestry Directorate. Both verdicts have been appealed, while the rulings of the local courts are expected shortly in the remaining two lawsuits.

The issue has also become a Muslim-Christian dispute, with the neighbouring villages' petition to the court featuring complaints that the monastery's monks have engaged in "anti-Turkish activities"; that they are illegally converting children to Christianity; that the Mor Gabriel Community Foundation settles wherever it chooses without the requisite permits; and that it has acted in violation of the Unity of Education Law.

On the other hand, Aramaeans complain that they lack sufficient teachers for their children's instruction in even basic Aramaic literacy. In addition, they are not recognized as a religious minority, unlike the Greek, Armenian and Jewish communities, despite their being mentioned as such in the Lausanne Treaty of 1923, the founding agreement of the Turkish Republic.

Messo of the SUA underlines that if Aramaeans were recognized in accordance with the Lausanne Treaty, "their basic protection and development in Turkish society, including the Aramaic language, and religious, cultural and property rights" would be ensured.

He also emphasises that the court cases against Mor Gabriel were a wake-up call for the community: "After the lawsuits, we realized that we are facing similar problems, similar land disputes, so we decided to co-operate to resolve our problems."

Guarantees from the Turkish government

As an indication of this co-operation, the SUA has sent letters to Turkish officials, including President Abdullah Gül and Prime Minister Recep Tayyip Erdogan. In a letter sent in May, the SUA asked Erdogan "to ensure through your public statements that the Aramaean people who wish to return to their ancestral lands have a guarantee that their property rights are protected by the Turkish government and all relevant government bodies."

Ruhet Ergül returned to her ancestral lands before such a guarantee was given, and is thinking about having four or five children. But Karagöl's 11 children have to attend a boarding school in another Aramaean village a couple of hours away just to receive a primary Turkish national education. When asked about potential problems with her children's future education she answers:

"Then we can move back to Europe; it's easy to get an Aramaic education there."

Religious Conflict in Turkey
A Cold Wind Sweeping the Tur Abdin
In south-eastern Turkey a neighbourhood dispute over a few hectares of stony ground has escalated into a religious war between the Mor Gabriel Monastery and the surrounding Arab and Kurdish villages. Susannne Güsten has the details

Interview with Selçuk Şirin
"Turkish Youths Have Multiple Identities"
In a recent study about the political identities of Turkish youths, Selçuk Şirin finds that Kurdish youths feel more discriminated against than other Turkish youths, whereas young Armenians in Turkey do not feel more political pressure than Turks of the same age. Jan Felix Engelhardt spoke to the New York-based professor of applied psychology about his findings

END_OF_DOCUMENT_TOKEN_TO_BE_REPLACED
Social media
and networks
Subscribe to our
newsletter