Economic hardship drove tens of thousands of Syriac-Orthodox Christians to settle in Europe in the 1960s and 70s. A second wave fled in the 80s and 90s during the Kurdish-Turkish war. Caught in the crossfire between Kurdish rebels and the Turkish army, the Arameans may not have been directly involved in the war, but they were nevertheless regarded with mistrust by both parties in the conflict.

Displacement, the abduction of village priests and a series of attempted murders on Christians drove entire villages into exodus. Today, the Aramaic population of Turkey is around 15,000. In Mardin, they say there are just under 100 families. In comparison: some 100,000 Syriac-Orthodox Christians live in both Germany and Sweden.

The worst times are over

"Fortunately, the worst times are over. During my youth in Mardin, I didn’t experience any more discrimination. Maybe a bit of teasing in school, but no big deal," says Iliyo. His father suddenly appears in the courtyard. He’s wearing a black priest’s cap and smiles at the group. The boys interrupt their game of football to respectfully kiss the clergyman’s hand. Theodora from Heilbronn gives her grandfather a hug. 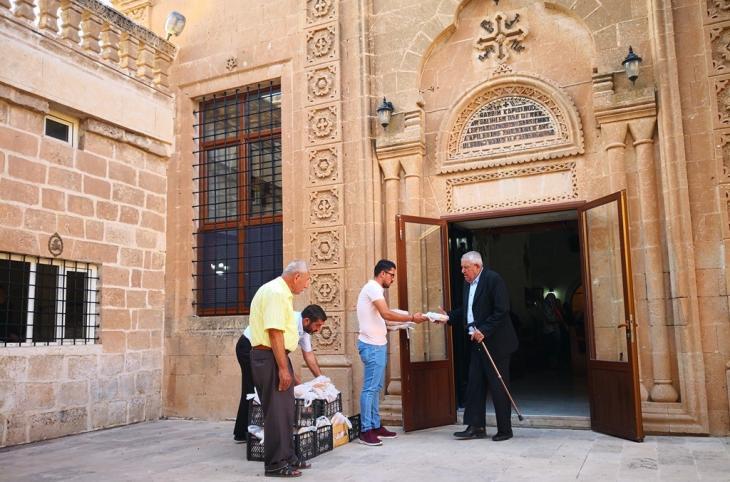 Midyat is located in Tur Abdin (Aramaic for "mountain of the servants of God"), a region that has been a spiritual centre for Christians for 1,700 years. Once, 80 monasteries of the Syriac Orthodox Church of Antioch flourished in Tur Abdin, of which only seven are still active today. In the Mor Barsarmo Church of Midyat, consecrated bread is distributed after evening prayer

To the east of Mardin, a road leads through the town of Midyat – which has a population of 100,000 – and deep into the region of Tur Abdin. The landscape here is a mix of bare hills and craggy chalk mountains quarried for the materials to build the houses of Mardin. In a region about the size of Belgium, agriculture has sustained people for centuries. As well as pomegranates, figs, melons and apricots, seven different types of grape are grown here, which the Arameans make into their famous wine.

There used to be 80 thriving monasteries in Tur Abdin (Aramaic for "mountain of the servants of God") – only seven are still in use. To this day, there are just as many church spires as minarets in the villages of this region.

Sufis today are under attack from fundamentalists and modernists alike. At the same time, a new form of Sufism is emerging in the West. By Marian Brehmer END_OF_DOCUMENT_TOKEN_TO_BE_REPLACED

The devaluation of the Egyptian pound combined with rising food prices is taking its toll on Egypt. More and more people are slipping into poverty. Karim El-Gawhary reports from ... END_OF_DOCUMENT_TOKEN_TO_BE_REPLACED

Since returning to power in Afghanistan, the Taliban have steadily eroded the rights and opportunities of women and girls, particularly their access to education. But Afghans are ... END_OF_DOCUMENT_TOKEN_TO_BE_REPLACED

The book "The Invention of the Maghreb: between Africa and the Middle East" prompts us to review basic terminology. This includes terms that we use almost every day as if they are ... END_OF_DOCUMENT_TOKEN_TO_BE_REPLACED

Tunisia has been going through a severe economic and political crisis in recent years. More than one in three young people there are unemployed. For many skilled, qualified and ... END_OF_DOCUMENT_TOKEN_TO_BE_REPLACED

At the end of every year, the team at Qantara.de gives you a run-down of the ten most-read articles on the site over the past 12 months. Here is a quick overview of the stories ... END_OF_DOCUMENT_TOKEN_TO_BE_REPLACED
Author:
Marian Brehmer
Date:
Mail:
Send via mail

END_OF_DOCUMENT_TOKEN_TO_BE_REPLACED
Social media
and networks
Subscribe to our
newsletter