Enhil, a 15-minute drive south of Midyat at the end of a winding dirt track, could be symbolic of many places in Tur Abdin. The old Aramaic village with a view over the Mesopotamian plateau is a cluster of partially dilapidated houses on a hilltop. Today, 60 of the families in the village are Muslim and three Christian. Two churches serve as a reminder of the community’s former faith. Both of them are locked up. There’s a note stuck to the door of one of them with the caretaker’s telephone number on it.

Ilyas arrives a few minutes later. The shy man with the angular face is wearing ripped jeans; his white T-shirt tucked into the waistband. Ilyas unlocks the church that was renovated in 2005 with donations from the German and Swedish diaspora. The refurbishment cost 700,000 Euros. The chancel is simple, in the middle lies a thick leather-bound Bible covered in swirling characters.

"We share the priest with other churches in the area. On good days, 30 people will attend the service, most of them from nearby villages," says Ilyas. But only in summer, when the diaspora Christians are visiting Tur Abdin. The fact that there are so few priests is also due to the law: to this day, the training of priests is prohibited. Those wanting to enter the priesthood have to move to Damascus, the seat of the Syriac-Orthodox Patriarch. 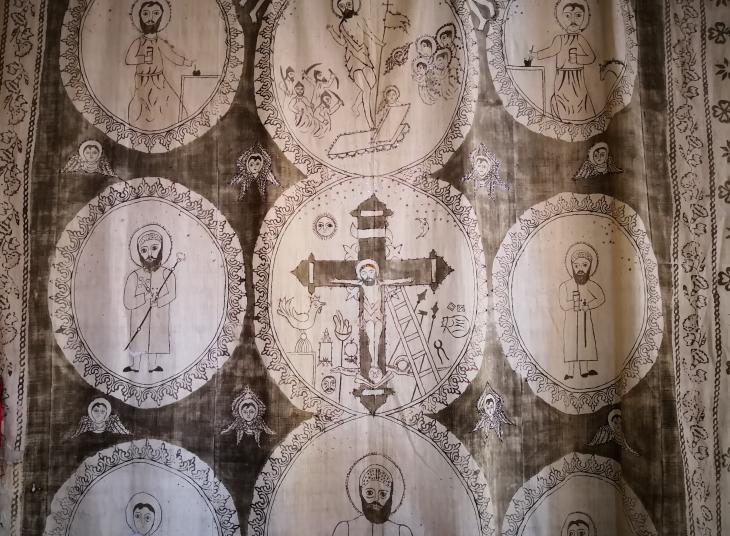 Syriac Orthodox Christians belong to the Monophysite denomination, which split off from Greek Orthodoxy in the sixth century. Monophysites believe that Jesus Christ possesses only a divine nature, a position that contradicts the otherwise prevailing ecclesiastical doctrine of the divine and human dual nature of Christ

Christians in villages like Enhil are also dogged by conflicts over property rights. Over the past few years, as a result of structural reform in the province of Mardin, many of the monasteries and churches became the property of the state, ostensibly because of missing land register entries. In May, this decision was reversed and the places of worship returned to the Christian community. In some places there are land disputes with Kurdish neighbours who have set up home in the abandoned houses of refugee Christians.

The devaluation of the Egyptian pound combined with rising food prices is taking its toll on Egypt. More and more people are slipping into poverty. Karim El-Gawhary reports from ... END_OF_DOCUMENT_TOKEN_TO_BE_REPLACED

Since returning to power in Afghanistan, the Taliban have steadily eroded the rights and opportunities of women and girls, particularly their access to education. But Afghans are ... END_OF_DOCUMENT_TOKEN_TO_BE_REPLACED

The book "The Invention of the Maghreb: between Africa and the Middle East" prompts us to review basic terminology. This includes terms that we use almost every day as if they are ... END_OF_DOCUMENT_TOKEN_TO_BE_REPLACED

Tunisia has been going through a severe economic and political crisis in recent years. More than one in three young people there are unemployed. For many skilled, qualified and ... END_OF_DOCUMENT_TOKEN_TO_BE_REPLACED

At the end of every year, the team at Qantara.de gives you a run-down of the ten most-read articles on the site over the past 12 months. Here is a quick overview of the stories ... END_OF_DOCUMENT_TOKEN_TO_BE_REPLACED

The government in the Netherlands, one of the last European nations to abolish slavery, has made an historic apology. But some feel that there is still a long way to go. By Ella ... END_OF_DOCUMENT_TOKEN_TO_BE_REPLACED
Author:
Marian Brehmer
Date:
Mail:
Send via mail

END_OF_DOCUMENT_TOKEN_TO_BE_REPLACED
Social media
and networks
Subscribe to our
newsletter