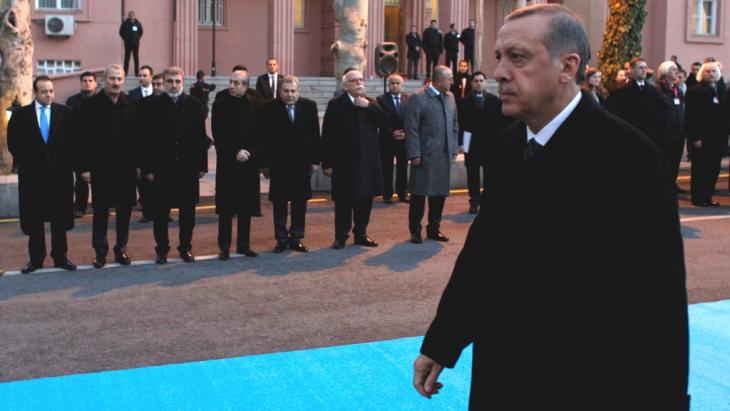 Turkey's corruption scandal
No light at the end of the tunnel

As the massive corruption investigation targeting allies of Recep Tayyip Erdogan continues, the Turkish prime minister has accused the judiciary of a conspiracy against his government. But what is behind these accusations? Ulrike Dufner has some answers

In recent days, Turkey's prime minister has repeatedly insisted that his government has been the victim of a conspiracy. His tone was still highly aggressive just a few days ago when he threatened to break the hands of those he accuses of plotting against his government.

The Turkish public is indeed convinced that the corruption scandal is an attack on Erdogan's government launched by the Fethullah Gulen movement. It is thought that the Gulen movement has formed something akin to a state within a state and secured key positions within the police force and the judiciary in particular.

Time and again in recent years, it has been suggested that the police and the judiciary are playing into each others' hands, and that numerous arrests made in the more recent past – such as those of Nedim Sener and Ahmet Sik – were made on the instigation of the Gulen movement. In the past, criminal proceedings attributed to the Gulen movement have infringed the rule of law. Oftentimes fantastic indictments, absurd "pieces of evidence", transcripts of tapped telephone conversations and much more have been used to detain writers, political activists and intellectuals for months and to initiate proceedings on charges of terrorism.

Erdogan's government allowed these proceedings to go ahead, stressing the independence of the judiciary. This is why many individuals such as Ahmet Sik and Nedim Sener spent months in detention and why criminal proceedings were launched against them. These lawsuits were classified as secret, which meant that their defence lawyers only discovered the reason for the indictment and arrest months after the detention began. Yet long before the indictment was made available to the accused and their lawyers, extracts from it were published by the media. 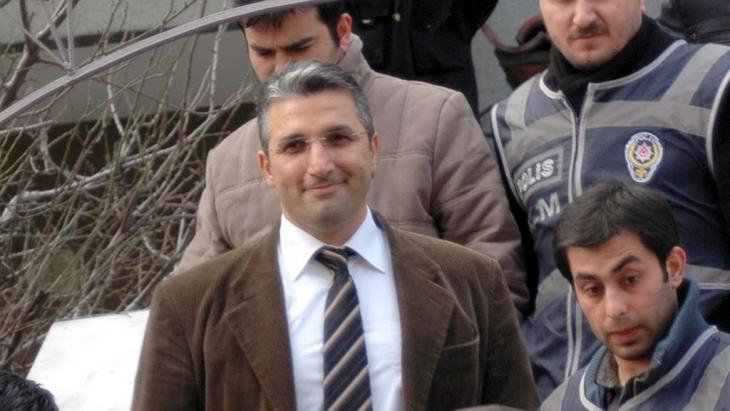 Thorn in the government's side: before conducting intensive research into the assassination of Hrant Dink, the Turkish journalist Nedim Sener (pictured here) was renowned for uncovering incidences of corruption

Claims that Erdogan was not always "happy" about the long detention period trickled out now and again. But in the case of Sener and Sik, for example, intervention came only at the point when political pressure and damage appeared to be too great. On the other hand, in numerous cases where comparable political pressure was not applied, journalists and politicians were left behind bars.

In the case of numerous building projects, whether for dams, nuclear power plants or urban modernisation programmes such as those in Istanbul, court orders to cease construction work were repeatedly ignored or repealed by a higher court. Building work continued. If any opponents of such projects became too vociferous, they were branded terrorists and worn down with endless indictments. The public was left to look on – in what at times was nothing less than incredulity – as principles of the rule of law were violated. Rumours repeatedly surfaced that the building tycoons were relatives of members of the AKP government and of Erdogan.

This is why no one in Turkey is surprised by the accusations of corruption or by Erdogan's statement that a "parallel state" – as the state within the state is called here – exists.

In the row over the closure of private tutoring institutes and private schools, the Erdogan camp repeatedly emphasised that the Gulen movement was ungrateful. They felt that its members had been given specific posts, their wishes fulfilled; they shouldn't be complaining. During the conflict over private schools, Erdogan's supporters publically stated that they had for a long time encouraged and supported the formation of this state within a state. 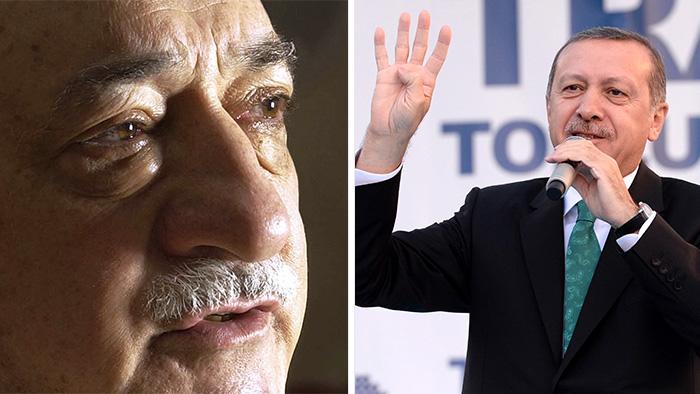 Broken alliance: for a long time, the Gulen Movement was a staunch supporter of the Erdogan government. But when the government decided to close the private tutoring institutes established by the movement (one of its main sources of income), the friendship between the two sides soured

What happened to cause this fissure between these two camps that share political values in most areas and mutually benefit from each other's actions? Some point to negotiations over the Kurdish issue and the attempt to bring intelligence agency chief Hakan Fidan to trial in February 2012. He was chief negotiator in the talks with the PKK and a close ally of Erdogan. The indictment against Fidan was only thwarted when Erdogan had a law passed that meant charges could only be brought against his ally with the prime minister's, or in other words his own, permission.

Experts believe that negotiations over the Kurdish issue are a key point at which Erdogan's supporters and the Gulen movement diverge. On the other hand, progress in the Kurdish issue is also contingent upon what is known as the KCK trial. The pro-Kurdish BDP is calling for the release of its elected politicians, particularly as elected CHP deputies arrested during the Ergenekon trial have been released in the past two weeks.

A review of the detention of elected and detained BDP politicians initially failed. The government then tried to placate the BDP by saying things would work themselves out, which suggests that Erdogan's people were no longer in a position to control the situation. This should not, however, lead anyone to the false conclusion that this group is in principle against the KCK trial. It just appears that they are no longer in a position to play the right cards at the opportune moment.

Erdogan's announcement of his intention to close down private schools and private tutoring institutes was a full frontal attack on Gulen's supporters. After all, the movement recruits supporters in these schools and profits economically from the vast network of educational establishments, affiliated publishing houses and the resulting connections that have grown out of it. Politically, the AKP has thus far supported these schools. The International Turkish Olympics, organised by the Gulen movement as a celebration of Turkish culture and attended by students of such establishments abroad, were always opened by government representatives. The event also served as a vehicle to promote the AKP government's foreign cultural policy.

A self-service store for AKP allies

In view of this fact, Erdogan's announcement was a shot across the bow to the Gulen community. It is likely that Erdogan was trying to close ranks in his party ahead of local elections and make potential dissenters see reason. But the plan didn't work; what he got instead was this corruption scandal. 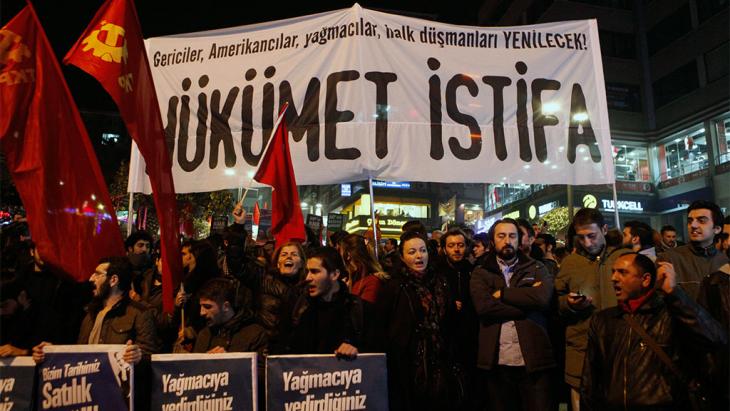 Anti-government demonstration in Istanbul: critics accuse Erdogan of hampering the judiciary's attempts to get to the bottom of the corruption scandal. Since news of the affair broke about two weeks ago, a total of five elected representatives of the ruling AKP have left the party

No one in Turkish public life knows whether the accusations are tenable and whether they are based on investigations that are in line with the rule of law. But everyone believes the government is capable of this kind of corruption. The fact that the government is now trying to meddle directly in legal proceedings, that public prosecutors are being dismissed, that senior members of the police force are being replaced and much more, makes it seem unlikely that democracy will triumph in the end.

Everyone assumes that the nation had become a self-service store for allies of the ruling AKP. In recent years, the law has repeatedly been manipulated when it appeared politically opportune. By the same token, the fact that the corruption is now being pursued in the courts cannot be seen as an achievement of a Gulen community concerned about the rule of law.

The actions of the Erdogan camp in recent days don't raise any hopes that at the end of the tunnel will be a democratic Turkey. It is not without reason that the calls for Erdogan's resignation are getting ever louder. The end of the system of favours, nepotism and legal adventures appears to be closer than ever before. But there is no way of telling how much longer the agony is going to last. It is also unclear how many principles of the rule of law will be sacrificed along the way.

Erdogan's supporters appear to want to hold out until the local elections in late March and present themselves as glowing victors. And all the while, Erdogan repeatedly stresses that in the end, the people will decide who governs.

Ulrike Dufner is head of the Heinrich Böll Foundation in Istanbul.

All eyes in Turkey are on a court hearing scheduled for January 30 into a child abuse case that allegedly occurred with the knowledge of one of Istanbul's most powerful Islamic ... END_OF_DOCUMENT_TOKEN_TO_BE_REPLACED

Any reconciliation between Turkey and Syria’s Assad regime would have disastrous consequences for many Syrians, explains Syria expert Kristin Helberg END_OF_DOCUMENT_TOKEN_TO_BE_REPLACED

The poetry of Pir Sultan once prompted uprisings in the Ottoman Empire. To this day, Alevis identify with him. Rainer Hermann visited Mehmet Celebi, a direct descendant of the ... END_OF_DOCUMENT_TOKEN_TO_BE_REPLACED

There are signs of an imminent normalisation of relations between Turkey and Syria. This would allow Erdogan to score political points domestically before the upcoming elections ... END_OF_DOCUMENT_TOKEN_TO_BE_REPLACED

Turkey will mark the centenary of the proclamation of the Turkish republic in October. But 2023 will be an important year in another respect too: Turks will go to the polls in ... END_OF_DOCUMENT_TOKEN_TO_BE_REPLACED

END_OF_DOCUMENT_TOKEN_TO_BE_REPLACED
Social media
and networks
Subscribe to our
newsletter