With Turkey′s free press increasingly muzzled, how far do cartoonists dare to go? A new exhibition at the Caricatura Gallery in Kassel, Germany showcases examples of their work. By Bettina Baumann 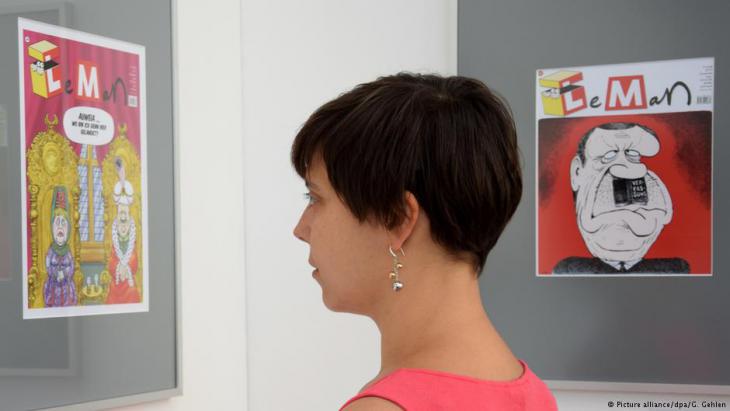 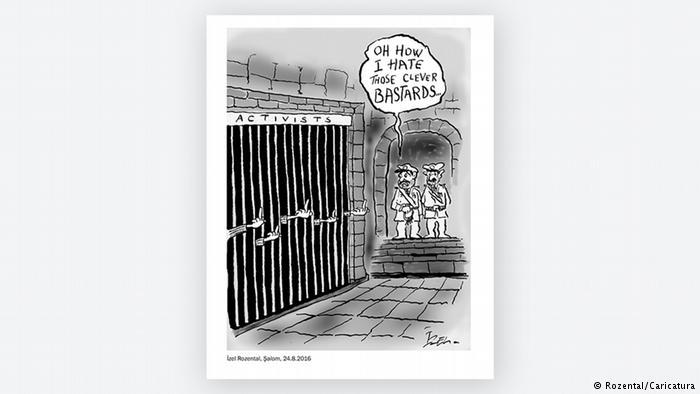 Imprisoned activists: the failed coup in July 2016 fundamentally changed Turkey. In the months that followed, 150,000 people suddenly found themselves without a job and 40,000 have been imprisoned – journalists, authors, activists. Many of them are being held in detention awaiting trial. The drawing shown above, by 66-year-old cartoonist Izel Rozental, dealt with this issue in August 2016 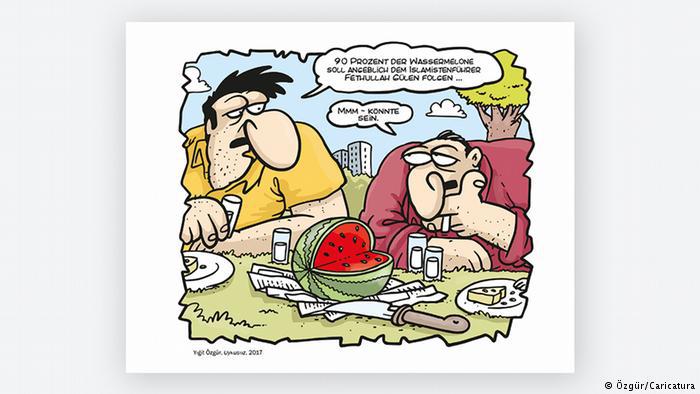 Gulen is everywhere: Erdogan has accused Fethullah Gulen of plotting the attempted coup and has since persecuted alleged members of the exiled cleric's movement. Cartoonist Yigit Ozgur has caricatured the fact that many Turks believe Erdogan's exaggerated blanket accusations: one man says, "90 percent of all watermelons are said to be Gulen followers." "Hmmm, could be," replies the other 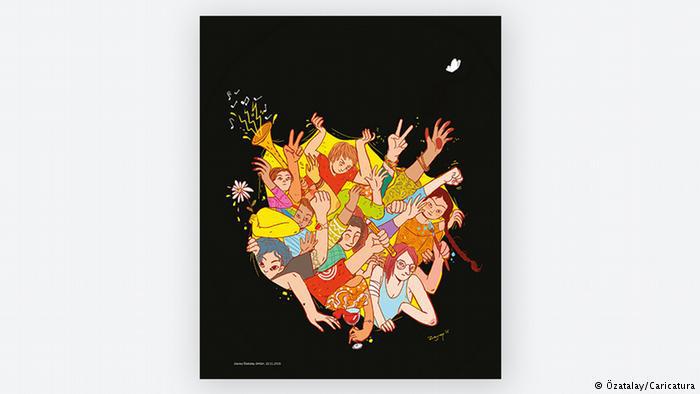 The quest for freedom: free spaces are no longer available everywhere in Turkey; one has to look for them and even fight for them. That's the idea transmitted by Zeynep Ozatalay's cartoon. The authors, musicians and painters depicted in this drawing succeed in pushing back the void. The cartoon was published in the newspaper BirGun, an open critic of Erdogan's party, the AKP 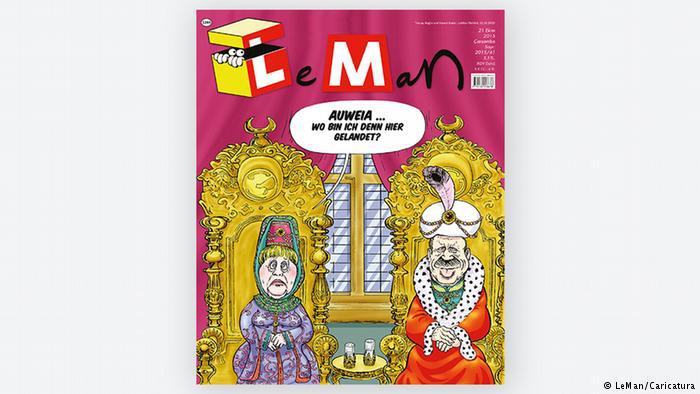 A dumbfounded Angela Merkel: in 2015, the cover of the Turkish satire magazine LeMan depicted the German chancellor with a puzzled look on her face, sitting next to the Turkish President Erdogan wearing a sultan's attire. "Where on earth am I?" she wonders. LeMan is one of Istanbul's three leading satire magazines. Turkey's Prime Minister Davutoglu once called it "immoral" 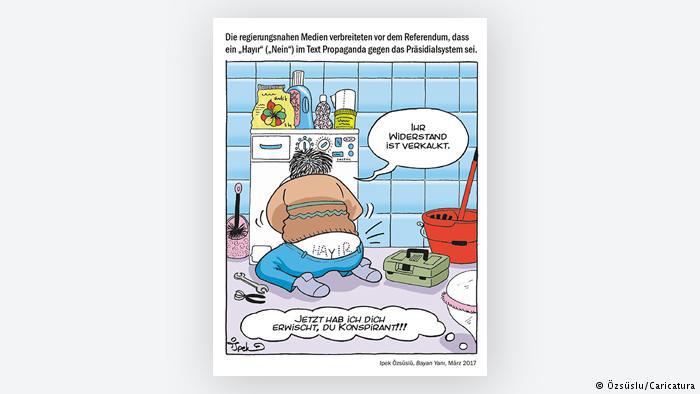 Critical voices unwanted: with 51.3 percent Yes votes, the constitutional referendum held in April broadened Erdogan's powers. During the demonstrations ahead of the referendum, the media was not allowed to freely cover supporters of the opposition's No – "Hayir" – position. This led Ipek Ozsuslu to draw this cartoon in March. "Your resistance is calcified," says the plumber with a Hayir on his bottom 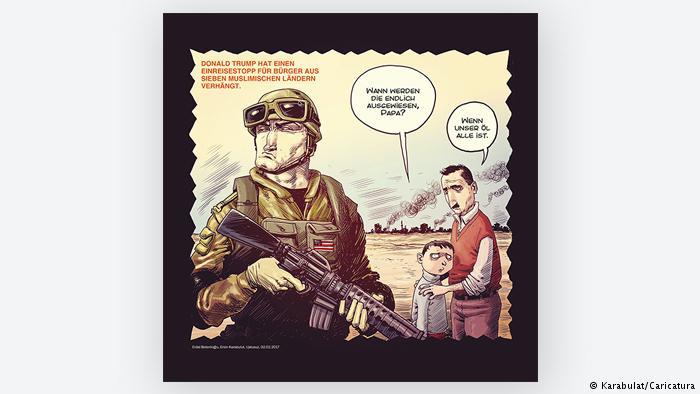 The interests of the U.S.: among the works on show at the exhibition "Schluss mit Lustig" (Get Serious), Erdogan is not the only one targeted by Turkish cartoonists. This drawing criticises Trump's "Muslim travel ban." Referring to U.S. soldiers, the child asks, "When will we finally expel them, papa?" The father darkly replies, "When our oil is all used up" 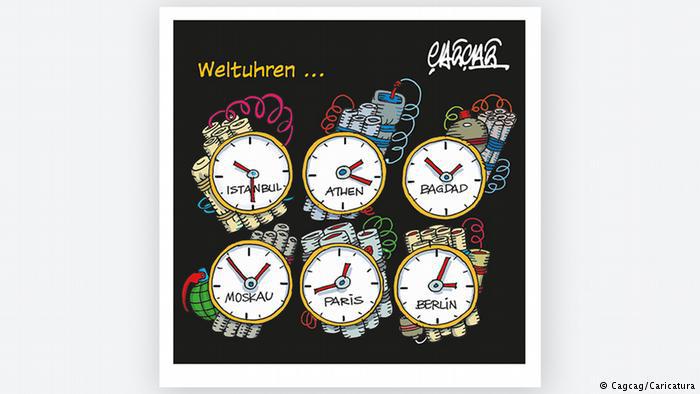 The state of the world: artist Mehmet Cagcag shows his views of the current state of the planet with this drawing: dynamite is attached to world clocks – and from Baghdad to Athens, from Berlin to France, international cities are ticking bombs. The cartoonist does not reveal when and if they'll actually explode 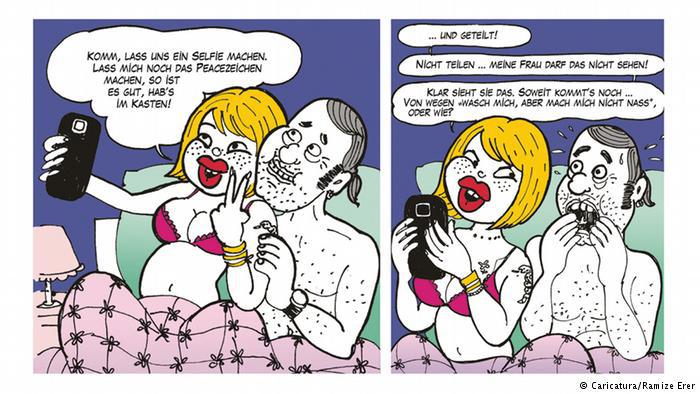 Sex = taboo: as one of the rare female cartoonists in Turkey, Ramize Erer addresses feminist topics and breaks taboos surrounding sex. She depicts explicit female sexuality, often offending the country's conservatives. One of her recurring characters is the busty, men-devouring "bad girl." Sexuality is one of the biggest taboos in Turkey 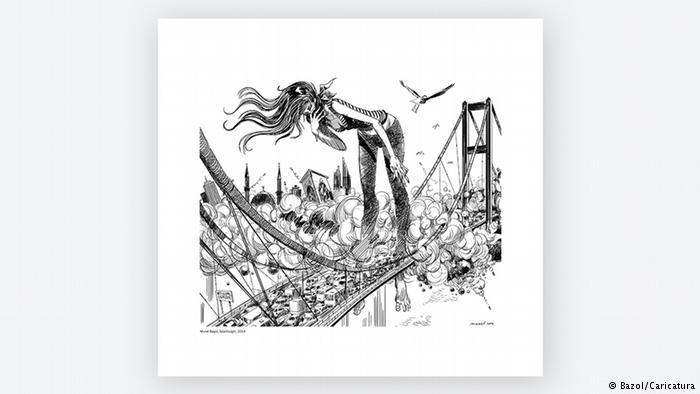 Third Bosphorus Bridge: with his drawing from 2014, Murat Basol reacts to the then-being-built third bridge over the Bosphorus. Unlike Erdogan, the cartoonist does not see the bridge linking the Asian and European sides of Istanbul as a demonstration of Turkey's progress, but rather as a polluting construction project that will lead to more traffic and exhaust fumes

END_OF_DOCUMENT_TOKEN_TO_BE_REPLACED
Social media
and networks
Subscribe to our
newsletter