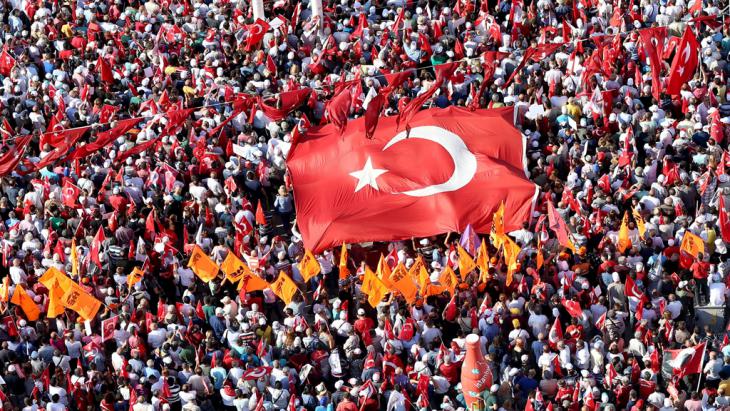 Hanging by a thread

The thwarted coup of 15 July is being celebrated by the AKP as well as large sections of Turkish civil society as a victory for democracy. But the state of emergency and the mass arrests spotlight the authoritarian political tide in Turkey. Ceyda Nurtsch reports from Istanbul

When on the evening of 15 July military jets circled over Istanbul and Ankara and troops from the Turkish army blocked central transport hubs with tanks and proclaimed the takeover of the country on the state-run television station TRT, Turkish president Tayyip Erdogan played what is arguably his prime trump card: the support of his followers. In a live broadcast on the television station CNN Türk, he called on the people to take to the streets and confront the military.

And in fact the otherwise so fractious political parties did speak out in unison against the military intervention. On the streets and public squares, the isolated officers with their unsuspecting young conscripts, who had been told it was merely an exercise, found themselves facing incensed crowds of protesters. Among them, however, was also a mob that took the President's appeal as giving them license to take justice into their own hands. Reports of banners with the inscription "God is great" and images of chanting bearded men in baggy shalwar-style trousers beating young soldiers with their belts in the name of God and country soon made the rounds in the social media.

Now the attempted coup has been defeated – costing over 200 people their lives and leaving more than 1,400 others injured – but the controversial purge of the military and the judiciary continues. Senior officers, judges and public prosecutors are still being arrested or suspended. More than 60,000 people have allegedly been affected. The government claims that it wants to verify the extent to which they support the movement started by the preacher Fethullah Gülen and the coup.

"Democracy watch" by those in government

Journalists, scholars and scientists are also still under pressure. At the same time, Prime Minister Binali Yildirim has called on the people to institute a "democracy watch", repeatedly sending text messages to mobile phone users. The message: they should express the will of people by assembling on public squares and safeguarding democracy. The sender: the Turkish Republic. Meanwhile in the mosques, preachers are using endless prayers to urge people to be especially vigilant.

What might have happened had the coup succeeded can be surmised based on the example of the authoritarian changeover in Egypt under Al-Sisi, or, looking at Turkish history, the country's own three successful coups. A similar scenario would probably have ensued, albeit under different auspices. 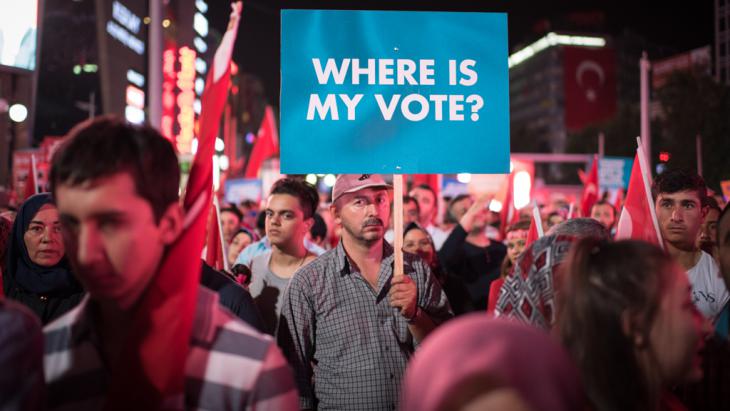 "Where is my voice?" In Ankara and other major Turkish cities, supporters of the AKP and other parties protested against the arbitrariness of the coup, pointing to the democratic legitimacy of the Erdogan government. The Turkish president blames the Islamic cleric Fethullah Gülen, now living in the US, for the failed military coup of 15 July, and has requested his extradition

In the purges being undertaken by the AKP, democratic legitimacy certainly plays an important role. And this is exactly where President Erdogan is scoring points among his constituents. He repeatedly reminds everyone that he is the country's first democratically elected President. Everything he is doing thus serves merely to protect the democratic order. The state of emergency is in line with democratic principles, he says. And Erdogan is likewise considering the reintroduction of the death penalty, abolished in 2004, in response to what he calls the "concerns of the people". That the AKP called for new elections without any political necessity, or that it has suspended the immunity of members of parliament, does not seem to diminish its credibility in the least.

Given the developments of recent years, the party's claim to want to bring back democracy seems like a farce. The AKP initially won over the electorate by convincing them that, unlike their predecessors, they were true democrats in the sense that they respected the "rule of the people" and would wholly put themselves at their service. In contrast to the elitist Republican People's Party (CHP), which condescendingly looked down in particular at the religious strata of society, the AKP quickly attracted an assemblage of conservative and religious politicians, becoming a party of the centre, sustained by a public that finally wanted to be understood and represented in its sense of religiousness by a party that would also uphold a conservative social order.Even the westernised urban middle classes gave the AKP the benefit of the doubt, seeing it as a kind of Turkish-style CDU. The expectations of the liberal middle class were however dashed completely at the latest with the Gezi protests in 2013.

But despite the fact that under the AKP cronyism and corruption – for example in the construction industry – have persisted under new auspices, despite the disproportionate use of force against the Gezi demonstrators in 2013, despite the state of near civil war into which the AKP has plunged the country through their handling of IS on the one hand and the PKK on the other, despite the aggressive and arbitrary actions taken against critical journalists and academics, something unheard of in Turkish history – voters apparently still do not question their loyalty to the party. On the contrary: the AKP was able to retrieve its absolute majority in the parliamentary elections of November 2015 with almost 50 per cent of the vote.

The end justifies the means

For broad sections of the population, President Erdogan is today viewed even more than before as a guarantor of stability in a sea of chaos. And because the country is in a state of emergency, reprisals against critics of government policy are justified in the eyes of many AKP supporters. The end justifies the means. Few people are giving any consideration to how the party may be exploiting this very instability to consolidate its own power base.

When Erdogan deprived the military of its erstwhile power in 2001, feelings were extremely ambivalent among the traditional Kemalists. Most of them voted for the opposition party CHP, which has recently become a laughing stock even among its supporters for its opportunistic lack of a clear stance. Of course everyone wants to act democratically. Those who are democratically legitimised by elections should also be democratically deposed. But sometimes, along the lines of the old Atatürk paradigm, the "stupid" people must be steered back onto the supposedly correct path. And if the people can't manage this themselves, the military should do it for them. Here as well, the end justifies the means. 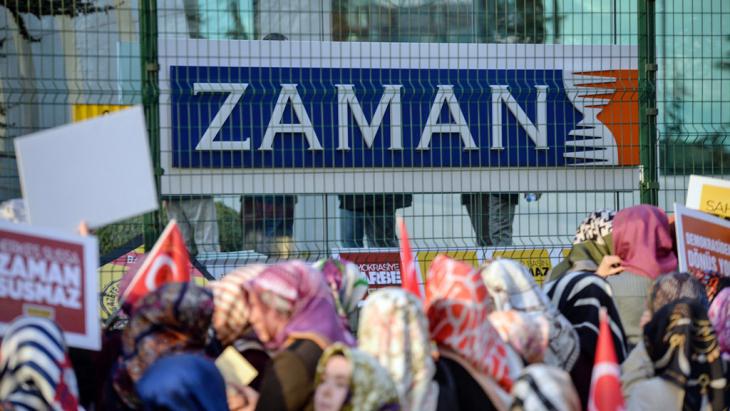 Settling scores with unwelcome Erdogan critics: After the failed military coup in Turkey, arrest warrants were issued against 47 former employees of the newspaper "Zaman". Only last Monday (25 July 2016), the government ordered the arrest of 42 journalists. The judiciary had taken action against journalists even before the coup attempt. In March, for example, police forcibly entered the editorial offices of "Zaman" in Istanbul and proceeded to put the newspaper under state control. Tens of thousands of civil servants have been suspended since the coup of 15 July. 13,000 people were arrested, 9,000 of whom are now in detention awaiting trial

All the while, the wave of repression following the military junta of 1980 is still a traumatic memory for many of those on the left, as well as for nationalist or religious forces in Turkey. Nobody wants to return to those days. People therefore welcome the weakening of the armed portion of the "guardians of the principles of the Turkish Republic" as an important step towards a democratic and civic order, while simultaneously fearing the abuse of this power vacuum.

Working together for a democratic future

Since the horrific night of 15 July, people are therefore taking to the streets daily, not only in response to the President's call but also merely to express their desire to live in peace. Their motto: We do not want to be ruled by religious extremists or by the military. In other words: We want neither a religious nor a secular dictatorship.

This coup d'état with its myriad inconsistencies will probably never be completely clarified – it will take its place among the many obscure and unexplained incidents in the history of Turkey.

After the failure of the coup, the way would now seem clear for the further sustainment of the presidential system in Turkey. Nevertheless, it can be hoped that the social cohesion of all those forces that defend the democracy will prove strong enough. And that the citizens will continue to demand basic democratic principles such as the separation of powers, the guarantee by the state of individual freedoms and fundamental rights, the protection of minorities, and freedom of expression – regardless of whether they are supported by religious, nationalist, Kemalist or liberal policymakers.

Some companies in Germany are reluctant to hire Muslims. But it is not only the Muslim applicants who are losing out, so too are the companies. After all, there are multiple ... END_OF_DOCUMENT_TOKEN_TO_BE_REPLACED

Artists and intellectuals in Turkey are coming under massive pressure. Since the attempted coup against Erdogan by parts of the military in 2016, the government has intensified ... END_OF_DOCUMENT_TOKEN_TO_BE_REPLACED

The disappearance of Razan Zeitouneh and her colleagues has been one of the greatest mysteries of the Syrian war – until today. DW's investigative unit hunted clues across six ... END_OF_DOCUMENT_TOKEN_TO_BE_REPLACED

How can the various realities of Kurdish life, shaped by depression, resistance and war, be depicted in art? This is the question addressed by the “bê welat – the unexpected ... END_OF_DOCUMENT_TOKEN_TO_BE_REPLACED

Almost all NATO troops have withdrawn from Afghanistan. Turkey is looking to fill the gap and is offering itself as a new protective power. But the Taliban are sending clear ... END_OF_DOCUMENT_TOKEN_TO_BE_REPLACED

Turkish refugees are for the most part invisible in Greece. In her film debut, the Greek journalist and filmmaker Marianna Kakaounaki portrays the fate of Turkish followers of the ... END_OF_DOCUMENT_TOKEN_TO_BE_REPLACED
Author:
Ceyda Nurtsch
Date:
Mail:
Send via mail

END_OF_DOCUMENT_TOKEN_TO_BE_REPLACED
Social media
and networks
Subscribe to our
newsletter