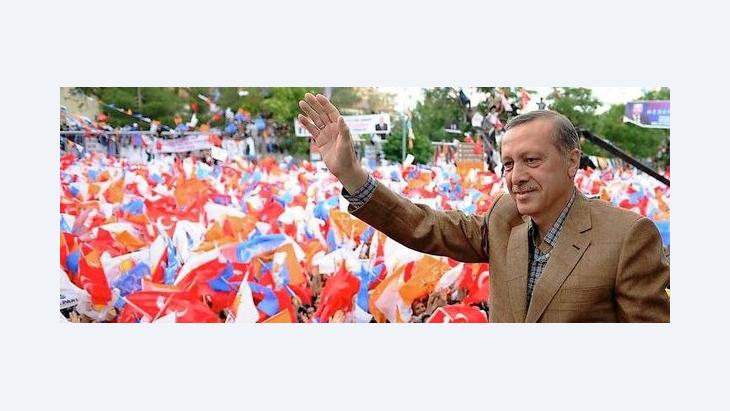 In Awe of Erdogan

﻿Prime Minister Erdogan can look forward to the parliamentary elections on 12 June with composure: his Islamic AKP currently has between 45 and 50 percent support in the polls. The opposition appears uninspired and politically beleaguered. Details from Thomas Seibert in Istanbul

The sun is shining, the crowds are cheering and waving brightly coloured flags. The excited crowd-warmer on the roof of the election campaign bus announces the arrival of a superstar. "Here comes the Grand Master," the man yells into the microphone. Ten thousand people are crushed into the market square of the north-west Turkish town of Lüleburgaz, gathered in front of a sectioned-off area around the bus bearing the emblem and election slogans of Turkey's governing AKP. Many of them have been here for hours – almost like waiting for a redeemer.

When Recep Tayyip Erdogan finally climbs out of the bus skylight and greets the frenetically cheering crowd, he has to ask his helpers for a jacket. The Grand Master is cold.

Erdogan has aged visibly over the past few years. His shoulders are hunched, his movements cautious. Now 57, he interrupts his speech for a series of coughing attacks. The man who has changed Turkey more drastically than any prime minister in the past thirty years, whose supporters have compared him to the legendary founder of the state Mustafa Kemal Atatürk, is clearly feeling the stress of the election campaign.

It will be his last campaign, Erdogan has announced. He wants to apply for a mandate in the parliamentary elections on 12 June, and then that's that. Erdogan wants to become president in a few years' time – or so his opponents say. For now, though, it's the parliamentary majority that's at stake, which will be important for the consultations on a new Turkish constitution over the coming months. Erdogan can look to 12 June with composure: his Islamic-rooted AK party is gaining a solid 45 to 50 percent in opinion polls – putting it well ahead of all other parties. 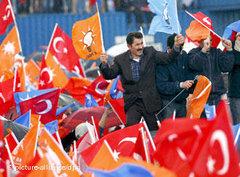 Party on the up: according to the latest polls, the AKP has almost 50 percent of voters' support, easily defending its absolute majority in Ankara

​​And he's has already chalked up one important victory: the bitter ideological feud between secularists and Erdogan's god-fearing Anatolians, which nearly led to the AKP being banned a few years ago, is now almost forgotten. It went very clearly in Erdogan's direction. The 2011 election is not about the headscarf, it's about the economy and jobs. "We've lowered inflation from 130 percent to 4.3 percent," Erdogan calls out, and the crowd in front of the bus waves their white and orange AKP flags in enthusiasm, alongside their red Turkish flags.

When a group of people start chanting "Sultan Erdogan", the "Grand Master" humbly contradicts them. No, he tells them, he's not an Ottoman sultan: "We're not in government to rule, but to serve." Then he talks about 13,000 kilometres of four-lane motorways the government has built and rattles off a list of other achievements.

It all looks like a perfectly normal election campaign, but that's precisely what makes it unusual in Turkey. Four years ago when the last election campaign was held for parliamentary seats in Ankara, the candidates weren't talking about roads and inflation figures; they were fighting over the country's soul. At that time the military was threatening to putsch against Erdogan because Abdullah Gül, a close friend of the prime minister and a similarly religious man, was designated as the next president.

The military failed miserably, an incredible 47 percent of voters chose Erdogan and his party, Gül became head of state, and the political landscape changed dramatically. Political reforms and criminal investigations into the military men with their passion for putsching have since further weakened the generals' position.

In 2008 the AKP barely scraped by a ban because it wanted to allow headscarves at Turkish universities. Last year, however, the headscarf ban was tacitly dropped without prompting major protests.

The new normality is also down to another man, who stops off in Lüleburgaz himself 45 minutes later, only a few hundred metres away from the AKP rally. Kemal Kilicdaroglu is five years older than the prime minister, yet he markets himself as a reformer. As the new head of the rather aged secularist CHP with its Kemalist influences, Kilicdaroglu has replaced the constant warnings against an alleged Islamist coup with traditional Social Democratic demands for jobs and social equality.

Kilicdaroglu doesn't say a word about headscarves in Lüleburgaz. He knows a Turkish political party can bury all hopes of entering government if it spots evil fundamentalists lurking behind every sign of religiosity, as the socialist CHP did for years. There are women wearing headscarves not only at Erdogan's public appearance, but also among the crowd of CHP supporters in front of Kilicdaroglu's stage in Lüleburgaz. They don't expect inflammatory anti-Islamist proselytising from the opposition leader. What they do expect is a promise that everyday life in Lüleburgaz will get easier. 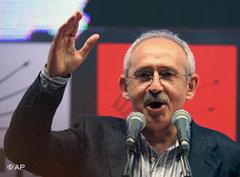 "The charisma of an accountant": at the moment, it does not look as if CHP opposition leader Kilicdaroglu's campaign will help him to take Erdogan's place

​​Kilicdaroglu meets their expectations. "There won't be any more unemployment," he promises the crowd, in the event of an election victory. "Closed factories will be opened up again." Official figures place unemployment in the Lüleburgaz region at 14 percent – three percent higher than the national average – but youth unemployment is at 25 percent. Both opponents and supporters of the AKP say the lack of jobs is the most pressing problem in the town. "The party doesn't matter, as long as something gets done," says local jeweller Efkan Kahya.

Kilicdaroglu is partly focusing his election campaign on voters' growing discontent over signs of corruption in the AKP. "Your children are unemployed, but their children live in palaces," he says of the families of top Ankara politicians. At the moment, however, it does not look as if this message will help Kilicdaroglu to take Erdogan's place. The CHP is at around 25 percent in the polls.

Great praise for the "Grand Master"

Despite its lead in the polls, Erdogan's AKP is suspected of using dirty methods to hold back the competition. The right-wing nationalist opposition party MHP, for instance, has been shaken for weeks by sex videos that turned up on the Internet, showing married party functionaries with female playmates – most of them much younger. In one case, a functionary's mistress is said to have received a jeep as a gift from her lover – paid for out of party funds.

The MHP promptly lost electorate support and may now not even make it back into parliament – to the benefit of the AKP, for the most part. The MHP leaders have accused the government of being behind the smear campaign. Erdogan rejects these claims: "We're not interested in your dirty laundry," he said recently. The MHP has failed to provide evidence to support its claims as yet.

Such evidence, should it exist, would have to stand up to every possible scrutiny if it were to do serious damage to Erdogan's beloved status in the general public. The prime minister's personal popularity rating is ten points above that of his party, i.e. 55 to 60 percent, says the opinion pollster Bekir Agirdir.

No other politician in Turkey achieves such figures. They are even unusual on an international scale, for a politician who has been at the helm for eight years. "He's the best prime minister for eighty years," says one voter in Istanbul, who does not usually have much time for the government in far-off Ankara.

The "Grand Master's" popularity across all party borders is a seemingly insurmountable hurdle for the opposition. AKP voters see Erdogan as the man who brought their country recognition from the international community as an emerging regional factor. "They listen to us now," says an AKP man in Lüleburgaz with pride. Even local CHP supporters have begun to pay the prime minister respect.

"He's clever and hard-working," says Demet Gülveren, a 32-year-old CHP voter. Erdogan represents Turkey's political and economic ascent over the past few years, while the opposition leader Kilicdaroglu has the charisma of an accountant. Gülveren openly admits as much: "He does seem a bit weak compared to Erdogan."

Political analyst Taqadum al-Khatib argues that Egypt can, in co-ordination with its European partners, develop a common vision to solve the complex conflict in Libya. For this to ... END_OF_DOCUMENT_TOKEN_TO_BE_REPLACED

At the suggestion of his Arab students, Israeli psychologist Ofer Grosbard created the project "Quranet", which uses texts from the Koran to solve educational problems in schools ... END_OF_DOCUMENT_TOKEN_TO_BE_REPLACED

Taking the Fridays for Future movement as his starting point, Muslim environmental expert Tarik Quadir talks to Marian Brehmer about the connections between Islam and ... END_OF_DOCUMENT_TOKEN_TO_BE_REPLACED

Muhyiddin Ibn Arabi (1165-1240) is one of the most influential Arab philosophers and mystics. James Morris, Professor of Islamic Theology at Boston College, explains why his ... END_OF_DOCUMENT_TOKEN_TO_BE_REPLACED

As historian Wiiliam Dalrymple writes in his essay, scholars are only now beginning to realise the extent to which the Mughal emperors adopted what most would assume to be ... END_OF_DOCUMENT_TOKEN_TO_BE_REPLACED