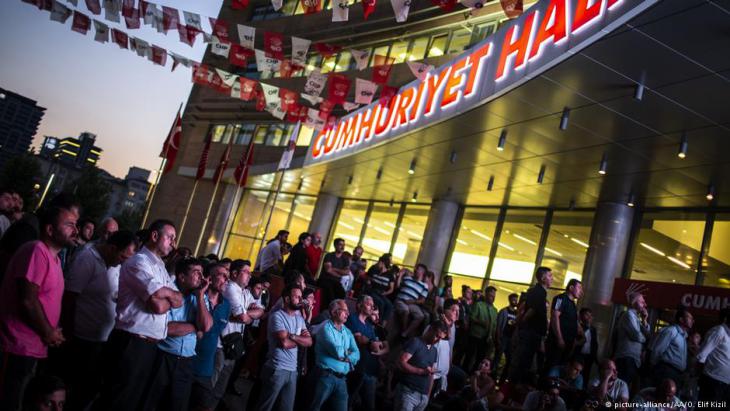 Following a tense run-up to the June 24 election, the Turkish people have once again delivered a fragmented result that reflects the countryʹs deep divisions. The only true winner is the Nationalist Movement Party (MHP), which – despite a relatively small share of the vote – now has critical influence in Parliament. Ayse Karabat reports from Istanbul

Twin ballots on 24 June in Turkey saw Recep Tayyip Erdogan elected the first leader to rule under a new presidential system of government, granting him strong executive powers. His Justice and Development Party (AK Party), however, not only lost its parliamentary majority but experienced a drop in support of around 7 percent.

The main opposition party Republican Peopleʹs Party (CHP) also fared badly: in 2015 it received 25 percent of votes, but this time garnered only 22 percent. Its presidential candidate, Muharrem Ince, was runner-up, favoured by 30 percent of voters.

The pro-Kurdish Peopleʹs Democratic party (HDP) made it past Turkeyʹs 10 percent election threshold, ensuring parliamentary representation, thanks to support from Turks in the western parts of Turkey. Many of Turkeyʹs Kurdish-dominated areas continued to vote AK Party, despite its pre-election alliance with the Nationalist Movement Party (MHP).The nationalists, meanwhile, secured close to 12 percent of the vote; little change on their previous haul, but giving them significant clout when it comes to alliances in Parliament.

A simple reason for complicated results

Turks have gone to the polls four times since 2014, with two general elections, one constitutional referendum and a presidential race. However, as political analyst Bekir Agirdir says, “for the last five years we have not been holding elections, but polling identities.”

According to Agirdir, Turkish politics has become ensnared in these identities. Thus, the economy, environment, gender policy, education and more, which might easily form the backbone of debate in other democracies, are not core issues for elections in Turkey. In this highly fragmented country voters don't express preferences on the basis of issues, but on that of identities. And always with the same result: a three-way split. 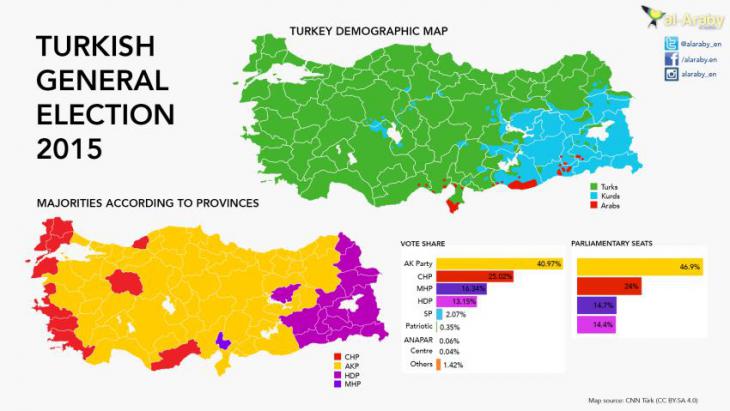 Not holding elections, but polling identities: as political analyst Bekir Agirdir points out, issues such as the economy, environment, gender policy and education, which might easily form the backbone of debate in other democracies, are not core issues for elections in Turkey

The first of these divisions is the western, coastal area of Turkey; highly educated, economically developed and secular. The second is the central part of Turkey, which still needs state support and tends to be populated by the less educated and religious. The third part, economically the most underdeveloped and concentrated in Kurdish-speaking areas, demands recognition of its Kurdish identity.


The first group mainly votes for the CHP, which is incapable of securing the vote of the others. The second group is by far the largest and votes for the AK party and the MHP. The third, the smallest in size, supports the HDP, a party that is all but taboo to many in the first and second group.

In this fragmented picture, whatever the individual political parties promise, election results have a tendency to repeat. This also proved to be largely the case for the snap elections of 24 June, but not without a few deviations.

The Turkish electorate takes voting very seriously. Turnouts are always very high and Sundayʹs was one of the highest, at almost 90 percent.

As well as a new presidential system, there was also a new election system. Voters were asked to choose their preferred political party for the 600-seat parliament as well as deciding between the individuals standing for the presidency. This system favoured a strategic approach.

Relations between Turkey and Russia are ambivalent. Moscow is nonetheless trying to prop up the leadership in Ankara. Elections are to be held in Turkey in June – and the last ... END_OF_DOCUMENT_TOKEN_TO_BE_REPLACED

All eyes in Turkey are on a court hearing scheduled for January 30 into a child abuse case that allegedly occurred with the knowledge of one of Istanbul's most powerful Islamic ... END_OF_DOCUMENT_TOKEN_TO_BE_REPLACED

Any reconciliation between Turkey and Syria’s Assad regime would have disastrous consequences for many Syrians, explains Syria expert Kristin Helberg END_OF_DOCUMENT_TOKEN_TO_BE_REPLACED

The poetry of Pir Sultan once prompted uprisings in the Ottoman Empire. To this day, Alevis identify with him. Rainer Hermann visited Mehmet Celebi, a direct descendant of the ... END_OF_DOCUMENT_TOKEN_TO_BE_REPLACED

There are signs of an imminent normalisation of relations between Turkey and Syria. This would allow Erdogan to score political points domestically before the upcoming elections ... END_OF_DOCUMENT_TOKEN_TO_BE_REPLACED

Turkey will mark the centenary of the proclamation of the Turkish republic in October. But 2023 will be an important year in another respect too: Turks will go to the polls in ... END_OF_DOCUMENT_TOKEN_TO_BE_REPLACED
Author:
Ayşe Karabat
Date:
Mail:
Send via mail

END_OF_DOCUMENT_TOKEN_TO_BE_REPLACED
Social media
and networks
Subscribe to our
newsletter