Fears fuelled by poverty and unemployment

In Turkey, the first people to be vaccinated were health workers and members of Erdogan's AKP parliamentary party. Then came the over-90s and after that, the over-65s.

There was no public outrage about the fact that the AKP parliamentary party had been given priority. Even the Turkish General Medical Council, which is generally rather outspoken in its criticism, has been unusually quiet in recent weeks. COVID-19 is simply no longer the most important issue in the country, says epidemiologist Savas. "People are struggling to survive – but not because of COVID."

According to a survey conducted by the DISK trade union, seven out of ten people are in debt and 40 percent of Turkish citizens are living below the poverty line. According to a different survey, 80 percent of the population consider rising inflation (unofficially at about 37 percent) and unemployment (about 24 percent) to be the country's most pressing problems. "The current account deficit is enormous and the balance of payments is completely shot," says Savas, who adds that people are committing suicide because of the financial difficulties they face. "COVID is no longer on the agenda, survival is."

Normally, Erdogan likes to blame others for any domestic problems, and he is generally successful in doing so. He is particularly fond of blaming other countries. A recent survey shows that just under 14 percent blame other countries; the majority (over 60 percent), however, holds Ankara responsible for the current misery. The coronavirus pandemic can no longer be used as a scapegoat either, since the number of people infected and the number of deaths have been sinking for weeks.

Are the infection statistics being doctored again?

Although a lot of tests are being conducted in Turkey, the daily recorded infection rate has been steady at 7,000 for several weeks now.

Serdar Savas estimates that the figures are between three and four times higher than official statistics. Indeed, right from the start of the pandemic, doctors and opposition politicians have been complaining that the true figures are much, much higher than the official ones. But even if the government has now returned to publishing doctored figures, the real figure has actually dropped.

Unlike in Germany, Turkey introduced radical measures at a relatively early stage: schools have remained largely closed since last March, and masks must be worn outside and in all public areas. Anyone breaking this rule has to pay a stiff fine.

For months now, people under the age of 20 and over the age of 65 have only been allowed to leave their homes during a fixed two-hour period. They are not, however, allowed to use supermarkets, pharmacies or public transport. Curfews have been in place for everybody at the weekends and in the evenings, and all restaurants, bars and cafes have been closed since November.

In addition, anyone who uses a bus or train or goes into a shopping centre, has to register using a digital code. This allows the health authorities to trace any chains of infection. This has undoubtedly played a role in the drop in figures. However, these figures have been stagnating for a few weeks. 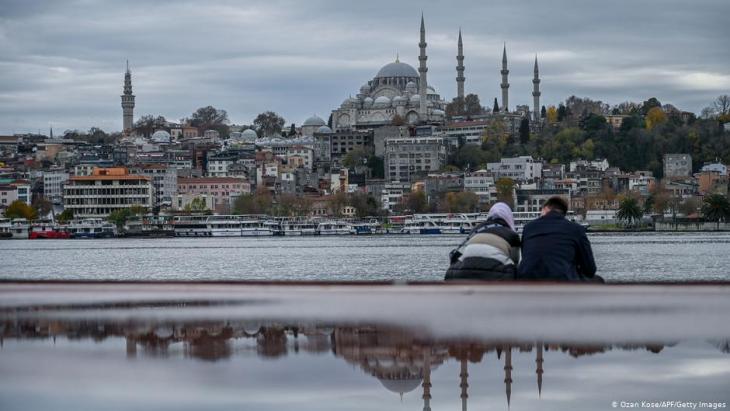 Istanbul under curfew: Turkey introduced radical measures at a relatively early stage. Schools have remained largely closed since last March, and masks must be worn outside and in all public areas. Anyone breaking this rule has to pay a stiff fine. For months now, people under the age of 20 and over the age of 65 have only been allowed to leave their homes during a fixed two-hour period. They are not, however, allowed to use supermarkets, pharmacies or public transport. Curfews have been in place for everybody at the weekends and in the evenings, and all restaurants, bars and cafes have been closed since November. Yet still politicians have failed to raise people's awareness of how important it is to protect themselves from the virus, writes Marion Sendker

"We are the most successful in the world"

According to Serdar Savas, the reason for this is that Turkey has made structural errors in the way it approached fighting the pandemic. The measures were respected less because the people really had an awareness of the threat posed by the pandemic and more because of the high fines imposed on anyone found breaking regulations. At the moment, civil servants are sending out about 30,000 fines notices a week.

Serdar Savas feels that politicians missed the opportunity to raise awareness among people about how important it is to spend as little time as possible in overcrowded places, to wear a mask and to wash hands regularly. The public, he said, was not made aware of how vulnerable it is. "On the contrary, people's perception of risk was actually lowered by statements such as 'We are the most successful in the world; we have survived the epidemic'."

Indeed, while the streets were totally deserted during the first wave, far fewer people are keeping to the rules during the second wave. Like young people whose parents have forbidden them to go to a party, some people slip out of their homes at the weekends and visit friends or meet up outside bakeries (which are still allowed to open) and have a coffee together. And like parents, who know full well that their children are breaking the rules, some police offers who are tired of being fine-imposing spoilsports, are turning a blind eye. If they don't see anything, it didn't happen.

COVID is still an excuse

All of this means that Turkey is stuck. A relaxation of regulations, which the economy urgently needs, would lead to an increase in the number of people affected because an awareness of the threat posed by the pandemic was never raised. People would not abide by any additional restrictions because politicians have never seriously explained to them what COVID is all about.

The pandemic has been ignored as much as possible by both society and politics. Corona only played at best a supporting role in the recent student protests against Erdogan's appointment of an ally as the new rector of the internationally renowned Bogazici University. About 200 students were taken into custody. The reason given was that they neither respected COVID regulations nor kept the prescribed distance from other people. It must be clear to everybody that this was just an excuse.

The fact that young people would prefer to take to the streets to protest against the government is symptomatic of the way the country is dealing with COVID. Even the country's academic elite consider the virus to be less dangerous than Erdogan's politics.

Home
Print
Newsletter
More on this topic
Politics and COVID-19: Coronavirus sees political polarisation in Turkey deepenCoronavirus and press freedom in Turkey: Erdogan's crusade against "all media and political viruses"COVID-19 pandemic: How is Turkey dealing with the corona crisis? Interview with Uighur activists: Does no-one have the guts to tackle China on the Uighurs?
Related Topics
Coronavirus, Education, Health, Immigration, Justice and Development party (Turkey), Migration, Policy on refugees and migration, Recep Tayyip Erdogan, Uighurs
All Topics

This 11 September marked the nineteenth anniversary of the terrorist attacks in New York and Washington. The wide-ranging repercussions of those attacks in the years since 2001 ... END_OF_DOCUMENT_TOKEN_TO_BE_REPLACED

Lacking support from Arab countries for its stance on the Kashmir dispute, Pakistan is looking for new alliances under China's leadership. How practical is it for Islamabad to ... END_OF_DOCUMENT_TOKEN_TO_BE_REPLACED

A partnership planned between Iran and China is intended to strategically link the two countries for a quarter of a century. It is unclear, however, exactly what the alliance will ... END_OF_DOCUMENT_TOKEN_TO_BE_REPLACED

A broad U.S.-led effort to hold the Chinese government to international account for its abuses of largely Muslim Uighurs in Xinjiang would, at the very least, remind China that ... END_OF_DOCUMENT_TOKEN_TO_BE_REPLACED

Five years after the Joint Comprehensive Plan of Action was concluded, it is on life support, following the US's reinstatement of sanctions and Iran's return to enrichment ... END_OF_DOCUMENT_TOKEN_TO_BE_REPLACED

END_OF_DOCUMENT_TOKEN_TO_BE_REPLACED
Social media
and networks
Subscribe to our
newsletter