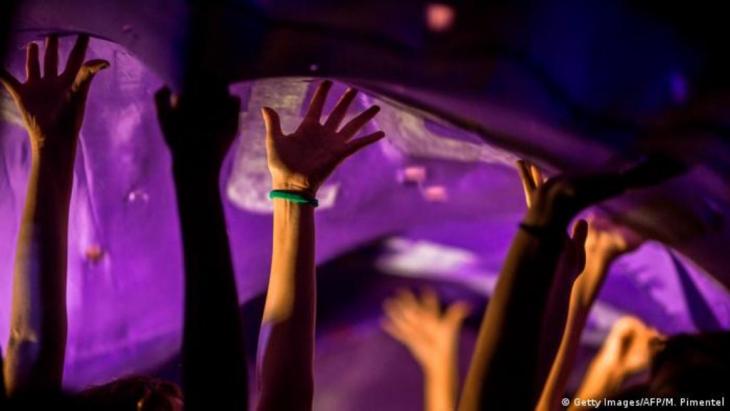 Turkey's femicide problem
"It was suicide!" – a state-sanctioned cover-up?

According to figures released by a leading Turkish rights organisation, 300 women were murdered in Turkey last year. The number of unreported cases is apparently much higher, however, since many unexplained deaths of women are classified as suicides. By Burcu Karacas

The gruesome murder of women is all too common in Turkey and news of such crimes repeatedly shocks large parts of the country. The May 2018 murder of 23-year-old Ankara resident Sule Cet is one that has lodged itself particularly deep in Turkey's collective memory: The young woman was raped in the office by two drunken men, one of them her boss. Afterward, she was tossed out of the window of the high-rise block.

The trial lasted six months and was accompanied by demonstrations and expressions of solidarity from women. The case was also followed with great compassion on social media. The public pressure brought results, with the court in Ankara sentencing the perpetrator to life in prison and his accomplice to almost 19 years in jail.

Back then, women's rights groups hoped the attention the case attracted would prompt a change in society – not just one supported by civil society, but by the Turkish judicial system as well.

Unfortunately, not much seems to have changed since then, with several new cases in which claims of suicide were used in an attempt to cover up femicides. Most recently, the tragic death of 35-year-old Ayten Kaya from the southeastern Turkish city of Diyarbakir has made headlines. Kaya was found strung up in her own home. 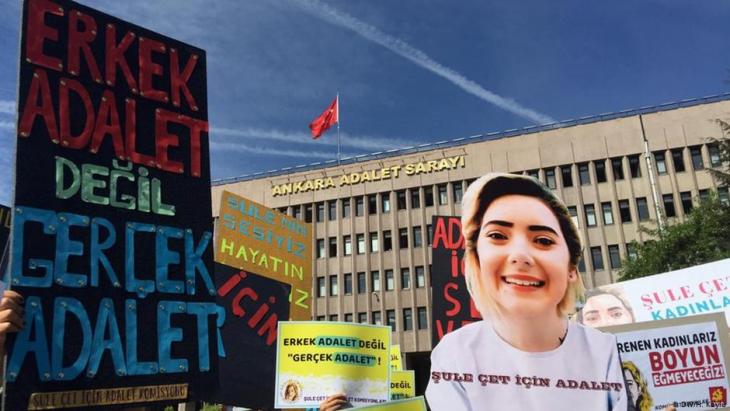 A femicide every day in Turkey: the murder of 23-year-old Sule Cet from Ankara in May 2018 in particular is etched in the collective memory. She was raped in her office by two drunk men, one of whom was her boss, and then thrown out of a window. According to many women's organisations in Turkey, however, it is the home is where women are likely to be exposed to the most violence

Investigators concluded that she had committed suicide. The state prosecutor's office closed the case. But the woman's relatives do not accept that version of events. They believe she was murdered and say the case file was full of holes and contradictions.

The autopsy failed to record a time of death, for example. And her entire body was covered with bruises – hardly consistent with death by hanging. The autopsy also showed that the woman had three-day-old hematomata on her body. Her husband, a seasonal farmworker, had been at home exactly three days before. Yet, despite numerous objections, state prosecutors decided not to re-open the case.

Lawyer Gurbet Gozde Engin is a member of the Diyarbakir branch of Rosa, an association for women. She reports that four more women died under similar circumstances during the weeks following Ayten Kaya's death and says prosecutors refused to investigate them. "In cases where women have died under circumstances in which suicide seems very doubtful, then it must be possible to steer investigations in a different direction. It is not just a crime to kill, it is also a crime to declare femicides to be suicides."

Hatice Coruk from the Kadin Kultur Evi Dernegi women's association places blame on the entire justice system: "We have to be more mistrustful whenever a femicide is classed as a suicide. It is increasingly a cover for femicide."

Leyla Soydinc from Mor Cati Kadin Siginagi Vakfi, an Istanbul-based women's association, also sees a structural problem. "In a justice system dominated by men, many of the crimes committed [against women] go unpunished." She says that men can feel certain they will be deemed innocent by the justice system as soon as they frame femicide as a suicide. "To make an ostensible suicide seem more plausible, the case file then says things like 'wasn't in a good mood, had psychological problems'."

Social media campaigns on the subject and the determined action of women's rights groups are putting the government and the judiciary under more and more pressure. But both have hushed up this problem for a very long time.

Until now it has been impossible to discern any real political will to fight violence against women. That, despite the fact that 300 femicides were recorded in 2020, according to figures published by the organisation We Will Stop Femicides. The organisation says another 171 women were found dead under suspicious circumstances in Turkey during that same time, some of those cases also included alleged suicides.

Many Turkish women are staking their hopes for change on the Council of Europe's Istanbul Convention. The treaty to prevent and combat violence against women and domestic violence dates back to 2014, with the convention obliging the signatories to create a framework to do so. Turkey ratified the agreement five years ago, underpinning it legally by passing a law to prevent violence against women and protect the family.

But in practice, critics say that the legal norms of the Istanbul Convention have not been adopted and the envisaged measures of support and protection for women remain have yet to be initiated. Violence and discrimination against women can only be prevented if Turkey's judiciary and law enforcement agencies actually implement the convention.

Deutsche Welle reports cautiously on the subject of suicide, as there are indications that some forms of reporting can lead to copycat reactions. If you are having suicidal thoughts yourself or are in emotional distress, do not hesitate to seek help. For information on support services in your country, visit https://www.befrienders.org/

Research project "The Global Qur'an", brainchild of Professor of Islamic Studies Johanna Pink and sponsored by the European Research Council, analyses the history and ... END_OF_DOCUMENT_TOKEN_TO_BE_REPLACED

Each year, thousands of people travel to the Turkish city of Konya to attend a week-long series of events and ceremonies that mark the death of the 13th-century Islamic poet, ... END_OF_DOCUMENT_TOKEN_TO_BE_REPLACED

A wedding extravaganza of bright colours, flowers, feasting and dancing, yet the bride, Nefie Eminkova, who comes from Bulgaria's Pomak – Muslim – minority, can see none of it. ... END_OF_DOCUMENT_TOKEN_TO_BE_REPLACED

A new Netflix drama series showcasing Istanbul's Jewish community in the 1950s depicts a once multicultural city. It is a production that pulls no punches, exposing dark chapters ... END_OF_DOCUMENT_TOKEN_TO_BE_REPLACED

Every year in December, the team at Qantara.de takes a look back at the articles that proved most popular with our readers. This year is no different. Here is a run-down of the ... END_OF_DOCUMENT_TOKEN_TO_BE_REPLACED

END_OF_DOCUMENT_TOKEN_TO_BE_REPLACED
Social media
and networks
Subscribe to our
newsletter