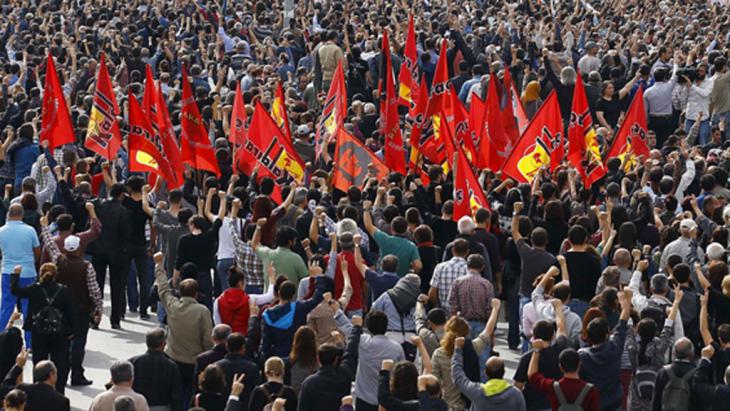 Turkey is heading to a general election on 1 November in the aftermath of the country′s worst terror attack, renewed fighting with Kurdish rebels and with a society increasingly polarised. The snap election comes after the inconclusive June poll that ended the AKP Party′s 13-year parliamentary majority. But, as Dorian Jones writes from Istanbul, the country may be forced into entering a new era of political compromise

The last few days of campaigning for the election on 1 November have taken place under a pall of mourning. The suicide bombing at a pro-Kurdish peace rally in the capital Ankara at the beginning of the month claimed the lives of 102 people. Rather than being an opportunity to bridge or at least abate the deepening polarisation between supporters and opponents of the AKP, however, the blast has only deepened the rift.

″The political discourse of the last four to five years has created serious fissures in our society,″ observes international relations expert Soli Ozel of Istanbul′s Kadir Has University. ″Those who died are not considered as innocent victims by a significant section of our society. The discourse of our leaders – despite the crocodile tears, the statements of mourning – is not sincere and this is seen by their supporters.″

At a match of the national football team in the provincial city of Konya, an AKP stronghold, a minute′s silence held to remember those killed in the Ankara bombing was drowned out by whistles and boos by home supporters. The AKP leadership managed to exacerbate the inevitably furious reaction by failing to utter any condemnation. 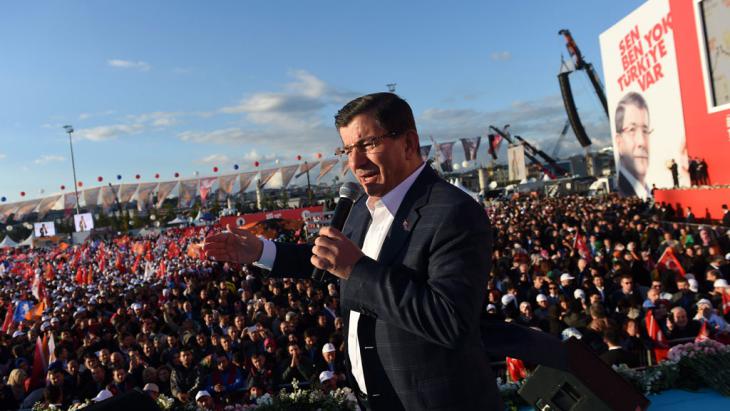 Little change in the opinion polls: everything appears to indicate that the elections of 1 November will produce much the same result as the polls in June. Even though it may not be to Erdogan's taste,"coalition may be the only way to end the seemingly ever-deepening political divide," writes Jones

Despite a steady accumulation of evidence suggesting negligence, wilful or not, the Ankara bombing is unlikely to affect the election on 1 November. ″Given the high degree of polarisation in the country it is very unlikely that we would see a large and significant shift in the vote,″ predicts Sinan Ulgen, a visiting scholar of the Carnegie Europe in Brussels, ″certainly not in a way to effect the outcome of the elections in any big way.″ AKP leader Ahmet Davutoglu claims the party has received a small boost in support since the bombing, a statement contradicted by his own party spokesman, Omer Celik, who asserts the opposite.

Ever since campaigning began, opinion polls have remained stubbornly unchanged, indicating a repeat of the inconclusive June vote, in which the AKP lost its parliamentary majority. ″There is a real feeling of being fed up among most Turks,″ notes Semih Idiz, political columnist for Turkey′s Cumhuriyet newspaper and Al Monitor website. ″They don′t even understand why we′ve been forced to go to this election so soon after the last one, especially when the chances are the result will be the same as before. I think this will crystallise the support they gave in the June election.″

Such disenchantment is clearly visible, with little apparent enthusiasm among the public for the polls. Elections in Turkey are usually embraced by the general public, keenly followed on TV and accompanied by high attendance at rallies and feverish debates. Even the party flags and banners that traditionally adorn the streets are few and far between.

Even more striking is the fact that President Recep Tayyip Erdogan has chosen to play a low key role in this election. Widely accepted as being an unbeatable campaigner, Erdogan took centre-stage for the AKP in the June elections, even though he is supposed to remain neutral. Such a flagrant breach of the constitution was widely criticised even amongst his own supporters. His stepping back is also seen as a tactical move, in an attempt to distance himself from an election that is widely predicted to see the AKP once again failing to achieve a parliamentary majority. 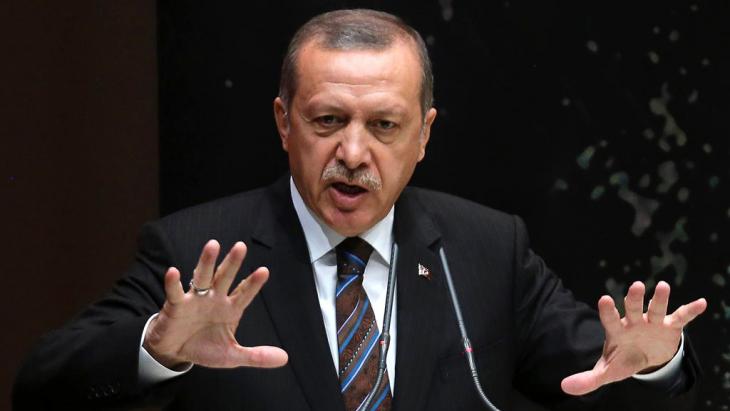 Erdogan's game plan: to push the HDP below the 10% voting threshold, which would almost certainly give his party the constitutional reform-changing majority

By voicing strong opposition to a coalition government, the president is generally blamed for this repeat of the elections. ″I don′t believe the leader of the AKP will commit political suicide,″ Erdogan warned just a day before AKP leader Ahmet Davutoglu was to decide whether to form a coalition with the main opposition CHP party.

The president has made little secret of wanting to Turkey into an executive presidency with few checks and balances, akin to Vladimir Putin′s Russia. To achieve this he needs his AKP party to secure a three-fifths parliamentary majority. Those hopes were dashed by the pro-Kurdish HDP entering parliament for the first time in the June election with 13% of the vote. That success not only put paid to Erdogan′s presidential dreams, but also cost his party its parliamentary majority.

Forcing a ″re-take election″, as Erdogan now calls it, his game plan would appear to be driven by the need to push the HDP below the 10% voting threshold, which would almost certainly give his party the constitutional reform-changing majority. A collapse in the ceasefire with the Kurdish rebel group PKK amid mutual recriminations, plunging the country back into conflict, came just weeks after the June election. Both the AKP Party and president have sought to discredit the HDP, labelling it a terrorist organisation linked to the PKK.

Such rhetoric is also aimed at courting Turkish nationalist votes. But even with the steady flow of slain soldiers and police, the critics′ label of ″Erdogan′s war″ has stuck, with the accusation that the conflict was deliberately provoked. The chant ″murdering Erdogan, murdering government″ became so common, media restrictions on coverage were enforced. ″He is hoping that the possible turmoil will knock sense – from his perspective – into the voters, so they will opt for stability,″ claims columnist Idiz. ″But there are many, many analysts who say this calculation is mistaken and that he is effectively gambling with the country′s future.″ 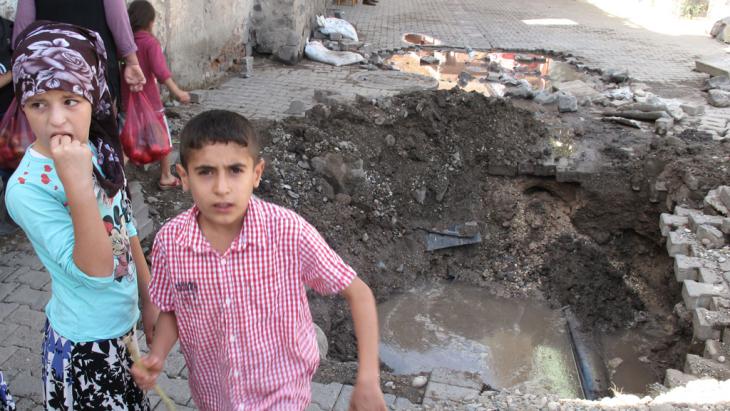 Pressure for strong government growing: Turkey is facing a host of mounting problems, from Syria and its resumed conflict with the PKK to a flagging economy

All opinion polls prior to the election embargo predicted the HDP entering parliament comfortably. AKP officials acknowledge a change in tactics, targeting seats it narrowly lost in an attempt to secure the extra 20 seats it needs for a majority.

With the country facing a host of mounting problems, from Syria and its resumed conflict with the PKK to a flagging economy, pressure for strong government is growing. ″I think people are beginning to accept the inevitability of a coalition,″ predicts analyst Ulgen. ″The first shock was June, when we ended up with no majority after 13 years. That was difficult for some people to accept and internalise, especially on the pro-government side. If we get the same outcome, which is the most likely result, then people – some more, some less – will grudgingly, if not happily, accept this inevitability.″

Pressure is also growing for the business and financial community: political uncertainty and international pressures have seen the currency plunge by over 25%. ″Unless we have a stable coalition, by which I mean CHP/AKP, since the others won′t do, 1the credit rating agencies will downgrade Turkey to sub-investment grade,″ warns Atilla Yesilada, political consultant for Global Source Partners. Such a downgrade would trigger further financial and economic pain. With Turkey′s currency already strengthening, the financial markets already appear to have made their mind up on such a coalition.

Pressure on Turkey′s political leaders to form a strong government in the aftermath of the polls is only expected to intensify. Coalition governments do have a bad reputation in Turkey, being associated with political and economic chaos, but coalition may be the only way to end the seemingly ever-deepening political divide. ″Regardless of how coalition performs, one of its benefits is that it will ease some of the extreme political polarisation we are witnessing,″ argues analyst Ulgen.

The devaluation of the Egyptian pound combined with rising food prices is taking its toll on Egypt. More and more people are slipping into poverty. Karim El-Gawhary reports from ... END_OF_DOCUMENT_TOKEN_TO_BE_REPLACED

Since returning to power in Afghanistan, the Taliban have steadily eroded the rights and opportunities of women and girls, particularly their access to education. But Afghans are ... END_OF_DOCUMENT_TOKEN_TO_BE_REPLACED

The book "The Invention of the Maghreb: between Africa and the Middle East" prompts us to review basic terminology. This includes terms that we use almost every day as if they are ... END_OF_DOCUMENT_TOKEN_TO_BE_REPLACED

Tunisia has been going through a severe economic and political crisis in recent years. More than one in three young people there are unemployed. For many skilled, qualified and ... END_OF_DOCUMENT_TOKEN_TO_BE_REPLACED

At the end of every year, the team at Qantara.de gives you a run-down of the ten most-read articles on the site over the past 12 months. Here is a quick overview of the stories ... END_OF_DOCUMENT_TOKEN_TO_BE_REPLACED

The government in the Netherlands, one of the last European nations to abolish slavery, has made an historic apology. But some feel that there is still a long way to go. By Ella ... END_OF_DOCUMENT_TOKEN_TO_BE_REPLACED
Author:
Dorian Jones
Date:
Mail:
Send via mail

END_OF_DOCUMENT_TOKEN_TO_BE_REPLACED
Social media
and networks
Subscribe to our
newsletter