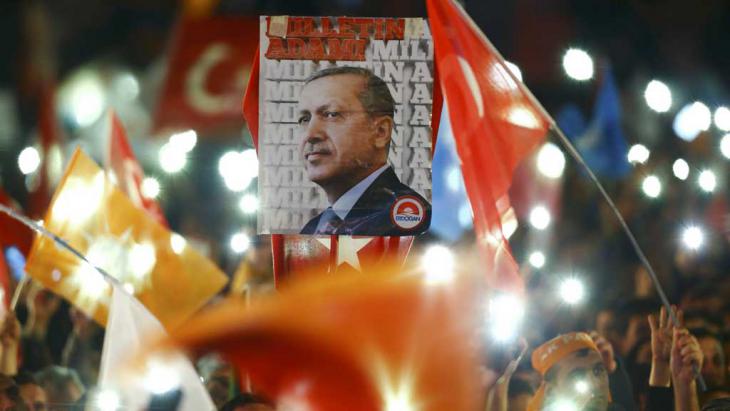 Turkey′s general election
"The AKP's nationalist strategy has paid off"

In conversation with Michael Martens, the Dutch expert on Turkey Joost Lagendijk analyses the election victory of President Tayyip Erdogan's AKP and the relationship between the "People's Democratic Party" (HDP) – with its Kurdish support base – and the Kurdish terrorist organisation the PKK

Mr Lagendijk, the AKP under Turkish President Tayyip Erdogan increased its share of the vote by almost 9 percentage points in Turkey's parliamentary elections on Sunday (1.11.2015) compared to the poll in June. How do you explain this success?

Joost Lagendijk: There were three main contributing factors: the biggest were the losses suffered by the "Nationalist Movement Party", which relinquished almost a quarter of its share. Pretty much all of those votes went to the AKP. The AKP pursued a nationalist strategy during the campaign, and that's apparently paid off.

Secondly, several extra-parliamentary splinter parties to the right of the AKP, which together captured around four percent of the vote in June, lost half of their votes to the AKP.

The third and most interesting aspect is that a section of the Kurdish vote turned away from the HDP and voted again for the AKP on this occasion. The HDP suffered considerable losses in its strongholds in southeast Turkey of all places, which indicates that many Kurds reject the PKK and the return to violence. The AKP succeeded in placing the blame for the renewed fighting solely at the feet of the HDP.

The AKP also conducted a different election campaign to the one in June, when Erdogan lobbied for the establishment of a presidential system.

Lagendijk: The party learnt its lesson from the June result. This time it didn′t make the mistake of making the introduction of a presidential system the core message of its campaign. A presidential system is rather unpopular with Turks and is even rejected by many AKP voters. So it was a shrewd decision not to mention it during the campaign. And for a while now, Erdogan's role in the campaign has been less central in comparison to June.

Instead, the AKP focused its most recent campaign on the question "stability or chaos?" It equated itself with stability, and the other parties with chaos. And whatever you might think of that: it worked. 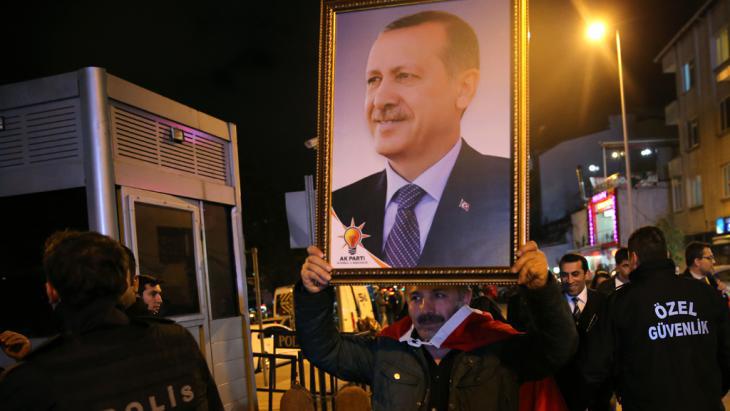 Iconic status: winning just under 50 percent of the vote, Recep Tayyip Erdogan's AKP was able to recapture the absolute parliamentary majority it lost five months ago. Preliminary results give the AKP 317 of the 550 seats in the National Assembly. In second place comes the CHP with 134, followed by the HDP with 59 and the MHP with 40 deputies. In the June poll, the AKP lost its absolute majority or the first time since taking over government in the year 2002

Despite winning an absolute majority, Erdogan still won't be able to push through his presidential system, because the AKP doesn't have the majority stipulated in the constitution to be able to initiate a referendum on the issue.

Lagendijk: Yes, and that's why it will probably mean he continues as before: he will rule the country as its de facto president, and the future government will accept that just like the last one did. We will continue to see Erdogan interfering in day-to-day politics, although according to the constitution he isn't actually allowed to do that. But he'll be able to do it because only the prime minister can challenge him – and he won't dare. So the constitution won't be amended on paper but, in reality, the almost daily breaches of the constitution by the president are set to continue.

AKP grandees such as the former president Abdullah Gul and several others had expected Erdogan to lose a second time after the June poll. Then they might have stepped forward. But what will they do now? Will they form their own party, or will they finally withdraw? That's an open question.

Can we now expect the attacks on journalists and media companies to continue in the wake of Erdogan's victory?

Lagendijk: I fear that could be the most dramatic consequence of this election result. There was speculation even before the election that the takeover of newspapers and broadcasters owned by the conglomerate Ipek Holding in late October was just the first wave in a series of attacks against independent media, which would then turn its attentions to major opposition newspapers such as "Hurriyet", "Zaman" and "Sozcu". On the other hand, the government could also halt these attacks – after all it has realised that it can win half of the votes even in the face of the resistance put up by these newspapers.

Just last year, many hoped that the AKP would pave the way for a lasting political solution to the Kurdish conflict in Turkey. Could the election result herald a new attempt at doing this?

Lagendijk: One of the winners of this election is the PKK. That the PKK has taken up arms again was a well-calculated attempt to force back the HDP. It's a pattern familiar from other conflicts: when elected politicians take the lead in a conflict – and the HDP was well on the way to doing just that – the radicals up in the mountains are the ones least likely to appreciate it. 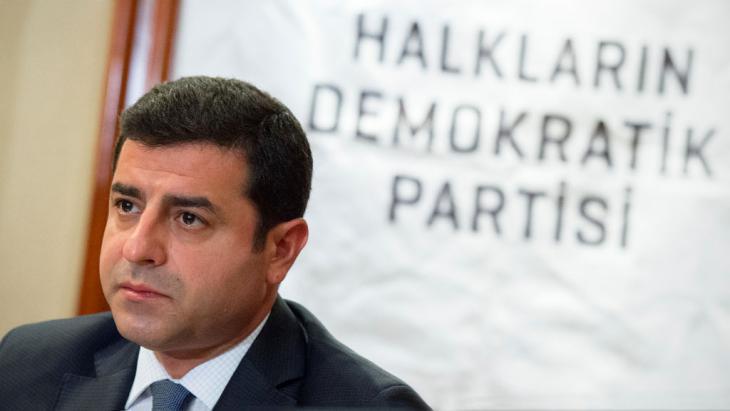 A loss of support for the pro-Kurdish HDP under its leader Selahattin Demirtas: although the HDP just managed to clear the parliamentary hurdle again, a section of the Kurdish vote turned its back on the party and switched its allegiance back to the AKP. The HDP suffered considerable losses in its strongholds in southeast Turkey, which indicates that many Kurds reject the PKK and its return to violence

The PKK knew very well that the HDP would be damaged if they took up arms again – and that's exactly what happened. The question is now: will the HDP fight back? Will it try to put the PKK hardliners in their place? Or are HDP politicians now so weakened that they can't take the lead? I hope this will lead to renewed debate among the Kurdish national movement regarding the grave mistake of taking up arms again.

Should there not be a debate first and foremost over how the HDP can do more to emancipate itself from the PKK?

Lagendijk: Yes absolutely. This election was a lesson for the HDP on how it should respond to PKK violence. The HDP is split between hardliners who won′t even contemplate the idea of breaking away from the PKK, and politicians who have distanced themselves from the issue. This second group was not visible enough, however, for those Kurds who voted for the AKP again this time around.

The refugee crisis has again made Turkey a sought-after negotiating partner for Europe. What impact will this have on EU accession talks?

Lagendijk: The European Commission's progress report is due to be published any day now. It will be fairly critical, but it won't cause much of a stir in Turkey, as for years now these reports haven't been taken especially seriously here.

Negotiations with the EU will revolve around the refugee crisis. Erdogan is now in an even stronger position than he was before with respect to this question. Europe wants something from him, and he will now demand even more in return. What are we talking about here? About money? A compromise can certainly always be found. About visa-free travel for Turks?

Whatever happens the preconditions that Turkey must fulfil won't change, since France and Germany in particular, not to mention several other countries, regard these as non-negotiable.

There still remains, of course, the demand concerning the opening of several tricky chapters in the accession talks. I was surprised that Turkey tabled a demand to open chapters 23 and 24 on justice and basic rights at all. But if it stays, it would be difficult for the EU to reject it – after all, it's what the bloc has always wanted. That could be the best outcome of this election.

Dutch national Joost Lagendijk studied history in Utrecht and served as a European parliamentarian for the Dutch Green Party from 1998 to 2009. During this time, he was among other things chair of the EU-Turkey Joint Parliamentary Committee for seven years. Since leaving politics in 2009, he's been living in Turkey and is viewed as one of the best foreign experts on the country. Lagendijk is a columnist for the Turkish newspaper "Zaman".

The devaluation of the Egyptian pound combined with rising food prices is taking its toll on Egypt. More and more people are slipping into poverty. Karim El-Gawhary reports from ... END_OF_DOCUMENT_TOKEN_TO_BE_REPLACED

Since returning to power in Afghanistan, the Taliban have steadily eroded the rights and opportunities of women and girls, particularly their access to education. But Afghans are ... END_OF_DOCUMENT_TOKEN_TO_BE_REPLACED

The book "The Invention of the Maghreb: between Africa and the Middle East" prompts us to review basic terminology. This includes terms that we use almost every day as if they are ... END_OF_DOCUMENT_TOKEN_TO_BE_REPLACED

Tunisia has been going through a severe economic and political crisis in recent years. More than one in three young people there are unemployed. For many skilled, qualified and ... END_OF_DOCUMENT_TOKEN_TO_BE_REPLACED

At the end of every year, the team at Qantara.de gives you a run-down of the ten most-read articles on the site over the past 12 months. Here is a quick overview of the stories ... END_OF_DOCUMENT_TOKEN_TO_BE_REPLACED

The government in the Netherlands, one of the last European nations to abolish slavery, has made an historic apology. But some feel that there is still a long way to go. By Ella ... END_OF_DOCUMENT_TOKEN_TO_BE_REPLACED
Author:
Michael Martens
Date:
Mail:
Send via mail

END_OF_DOCUMENT_TOKEN_TO_BE_REPLACED
Social media
and networks
Subscribe to our
newsletter