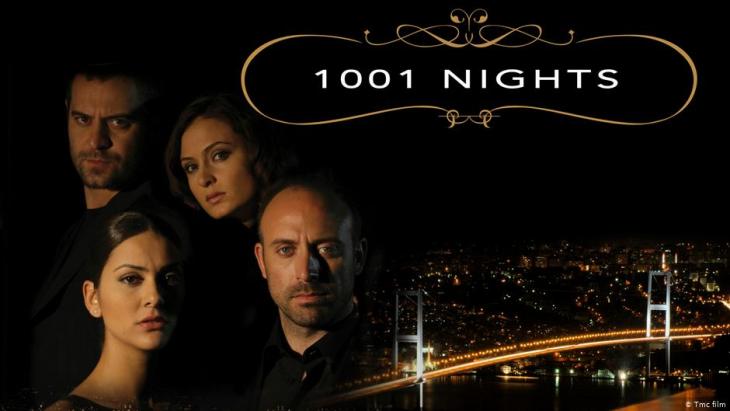 Televised Turkish dramas are all the rage in the Middle East. A young Ottoman TV Empire has been expanding its soft power by harnessing regional dialects, Arabic names and viewers' desire for racy-yet-traditional plots. By Jennifer Holleis

Some 15 years ago, Turkey launched its first satellite TV station and was thus able to broadcast around the world. A hugely popular genre of drama series called "dizi" was born, which appealed to audiences in the Middle East yearning for something more tangible than the out-of-their-world Mexican, U.S. or Korean soap operas.

A large swathe of the 200 million television-owning households in the Middle East warmly embraced the extremely handsome and utterly romantic new Turkish TV idols, who were dubbed into Arabic, bore Arab names and acted out Islam-compliant plots.

Popular Turkish dizi exports such as Noor, 1001 Nights, Magnificent Century and Resurrection: Ertugrul combine relatable plots, fancy outdoor locations and easily recognisable musical themes. The costly-to-produce daily episodes of up to two hours dealt with romance, love, arranged marriages, large families, patriarchy and fights against obstacles in the name of justice. But there is more to it than that.

Firstly, dizis have passed the inspection of the Turkish censorship authority, the Radio and Television Supreme Council, and are thus free of "scenes that are considered obscene and against moral values". This obviously covers nudity, lovemaking and French-kissing – though fights, violence and guns are considered "safe". 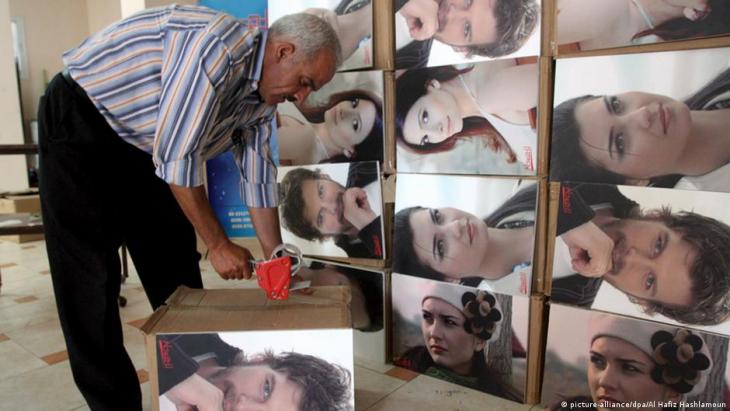 Popular in Palestine too: photos of the stars of "Noor" in a factory in Hebron in the West Bank. The Turkish TV soap opera about love, intimacy and equality was watched by millions of people every evening. Hardly a social taboo was left out

Secondly, not only have they been dubbed rather than subtitled, but they have been dubbed into Syrian-accented Arabic, which emotionally is more easily accessible than fus'ha, the literary and formal Arabic. The previously widely watched Mexican, Korean and U.S. soaps and telenovelas had all been dubbed into fus'ha.

Thirdly, Turkish dizis can be easily adapted to and perceived as Arab content.

Back in 2007, the biggest broadcaster in the Middle East and North Africa, the Saudi-owned Middle East Broadcasting Center (MBC), bought the Turkish production Gumus, renamed it Noor, and celebrated its first big success, with up to 92 million viewers following the love story of the heroine Noor and Mohannad (formerly Mehmet).

1001 Nights, which sold to almost 80 countries, followed soon after, and Magnificent Century, an epic drama about the life and love of Suleiman the Magnificent. "Magnificent Century has been seen by more than 500 million people worldwide," claimed Izzet Pinto, founder of the Istanbul-based Global Agency responsible for dizi distribution. As a consequence, Arab tourism to Istanbul skyrocketed and Turkish soft power had begun to gain momentum. 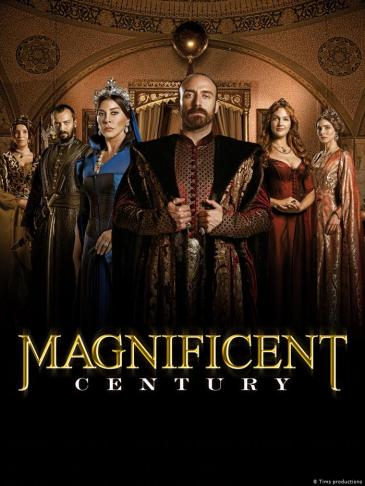 Uniquely Turkish flair: in Turkey, the TV series are known as "dizis". They represent a genre all their own, using a typically Turkish, theatrical style, original storylines and soundtracks. Turkey is now the second largest exporter of TV series after Hollywood

Resurrection is the exception at the moment, as new regulations to protect Pakistani content forbid dubbing. "Now, Turkish dizis are subtitled, and in turn the ratings have plummeted," bemoaned Izzet Pinto.

Many major buyers pulled out after the government of Saudi Arabia and the MBC called a halt to the acquisition of Turkish dizis in March 2018, when the Grand Mufti of Saudi Arabia, Sheikh Abdulaziz al-Sheikh, described Noor as "anti-Islamic" and "subversive" and claimed that television channels that broadcast the show were "an enemy of God and his Prophet."

Another lost market is Egypt, where Turkish TV was banned in 2013 after the military coup against President Mohamed Morsi (who was backed by Erdogan). The support of the Muslim Brotherhood and other Islamist movements still serve as the main argument against Turkey and any broadcasting of Turkish productions.

Despite the setbacks in Saudi Arabia and Egypt, Turkey's success at exporting its dizis, and thus its image, continues via distribution platforms such as YouTube, Starzplay, Netflix, MBC and OSN.

And Turkey's rivals are trying to get in on the trend: Kingdoms of Fire, financed to the tune of $40 million by the governments of Saudi Arabia and the United Arab Emirates, debuted in November 2019. The plot takes on Resurrection: Ertugrul by showcasing the Ottomans as "tyrannical occupiers who ravaged the Arab world for centuries", so the description issued by MBC.

The historical drama is set in the 16th century when the Ottoman Empire under Sultan Selim I conquered the Mamluk dynasty in Egypt. Though the conflict is ancient history, a whole new generation of Saudi filmmakers could take up the battle for influence in the coming years, as Crown Prince Mohammed bin Salman recently announced $64 billion dollars of investment in the country's entertainment sector over the next decade.

Recep Tayyip Erdogan, disappointed by the European Union’s reluctance to integrate Turkey into its ranks, has re-directed his country’s diplomacy toward the Maghreb and Africa to ... END_OF_DOCUMENT_TOKEN_TO_BE_REPLACED

The Egyptian series "El-Ekhteyar 2" was created by a production company with close ties to the military – and pursues a corresponding narrative. Moritz Baumstieger explains how ... END_OF_DOCUMENT_TOKEN_TO_BE_REPLACED

Looking to mobilise the Egyptians, Abdul Fattah al-Sisi and his ministers will refer to them as the "people". As soon as the Egyptians demand something of the state, however, they ... END_OF_DOCUMENT_TOKEN_TO_BE_REPLACED

The rollout of coronavirus vaccines in the Middle East and North Africa is already taking place on a massive scale, with the United Arab Emirates leading the way. Nevertheless, ... END_OF_DOCUMENT_TOKEN_TO_BE_REPLACED

Egyptian singer Umm Kulthum continuous to be an icon, almost 100 years after she published her first record. But what about the other famous women of the 1920s? In his new book, ... END_OF_DOCUMENT_TOKEN_TO_BE_REPLACED
Author:
Jennifer Holleis
Date:
Mail:
Send via mail

END_OF_DOCUMENT_TOKEN_TO_BE_REPLACED
Social media
and networks
Subscribe to our
newsletter