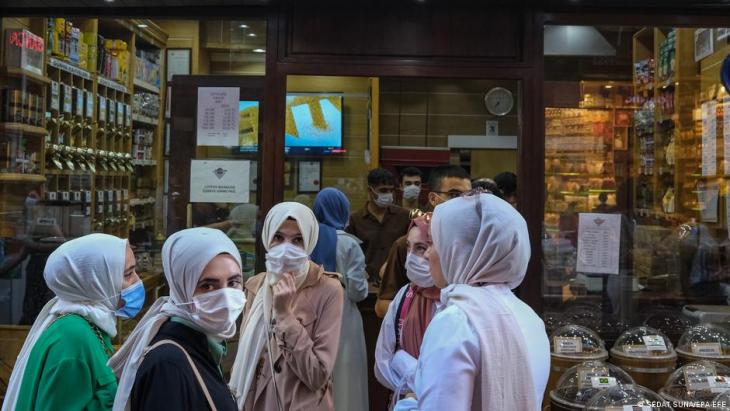 In Turkey, the secular opposition is seeking to enshrine the right of women to wear a headscarf in law – scoring an own goal that plays straight into President Erdogan’s hands. Yet again, men are arguing about women's clothing. By Burak Unveren

Few political symbols are more divisive in Turkey than the headscarf. For decades, the Turkish raison d'etat regarded the headscarf as a threat to modern, secular Turkey. For the country's founder Ataturk, the headscarf was the epitome of Islam at its most reactionary.

In 1999, when the Turkish MP Merve Kavakci entered the chamber wearing a headscarf, it was still a scandal. Socialist Prime Minister Bulent Ecevit shouted from the lectern at the time, "This is no place to challenge the state!" And in 2007, when Abdullah Gul was about to be elected president for the first time, there was a heated debate on identity politics; after all, his wife wore a headscarf. What was a no-go for secularists was a must for the Islamists of the ruling AKP.

Until 15 years ago, Turkish female students had to remove their headscarves to attend university, i.e. to be allowed to study at all. For years, women employed in the civil service were also not allowed to wear headscarves. Now, with the right-wing populist AKP in power for 20 years, restrictions and bans on the headscarf have largely been abolished.

Secularists fishing for votes – with the headscarf

It therefore came as quite a surprise when, a fortnight ago, opposition leader Kemal Kilicdaroglu, of all people, announced that his party wanted to enshrine the right of women to wear a headscarf in law. 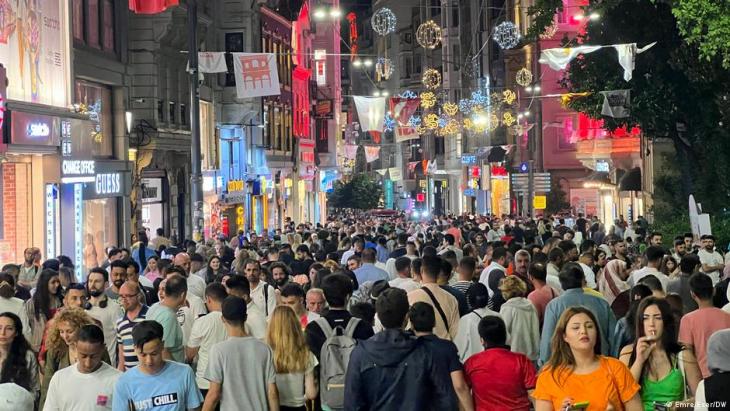 With or without a headscarf: around 58 percent of Turkish women leave the house wearing a headscarf, according to a 2018 IPSOS study. Unlike some other Islamic-majority countries, wearing a headscarf in Turkey is formally the private choice of women – as long as men aren't making it into a big deal again

After all, Kilidaroglu is the leader of the Kemalist social democratic CHP, the founding party of the Turkish Republic and traditionally sceptical about the headscarf. Apparently, Kilicdaroglu has realised that without the support of women wearing headscarves, electoral success in Turkey may prove impossible.

He is aiming to be the opposition candidate to challenge Recep Tayyip Erdogan in the June 2023 elections. However, there are several snags. For one thing, the opposition parties have yet to reach a consensus. They are still in search of a common candidate whom they believe will stand the best chance of defeating the incumbent president. Whether this will be Kilicdaroglu is not clear.

Secondly, the tactic appears to have backfired. Cleverly, Erdogan has run with the idea and announced that the proposed law is not enough. Instead, his party wants to amend the constitution and enshrine the right to wear headscarves in the Basic Law. What exactly the constitutional article should contain has yet to be announced. What has leaked out, however, is that the gender-neutral term "spouses" used up to now in the article will be changed to "husband and wife".

Berk Esen, a political scientist at Istanbul's Sabanci University, criticised this as a "blatant anti-LGBTQ step". Same-sex couples are not allowed to marry in Turkey, but the planned constitutional article would have an additional, highly symbolic homophobic meaning.

The own goal in the headscarf debate could cost Kilicdaroglu dearly politically, says Berk Esen. He has never been particularly popular as a politician anyway and now "his chances of becoming the opposition's candidate are even lower". He has weakened the unity of the opposition and "given Erdogan another means of pushing conservative issues".

As a result, the headscarf remains a highly politicised issue, for secularists as well as Islamists. This says something about Turkish society, says political scientist Esen. "In a democratic society, the headscarf would be a garment worn by a woman for religious reasons. It would have no political significance." 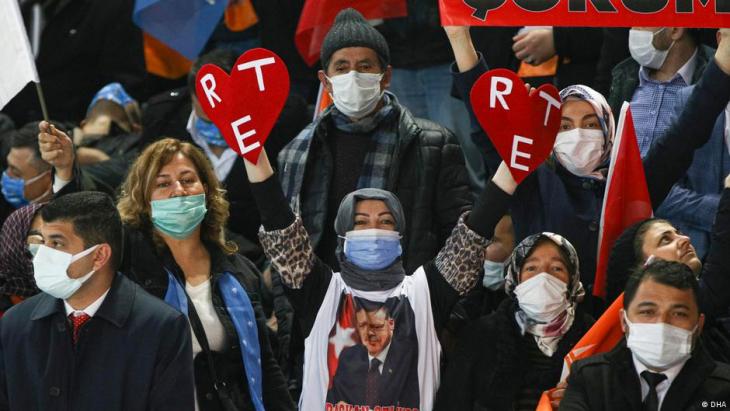 Islamic conservatives at the AKP party conference: even here, not all women wear headscarves. Many Turkish women generally reject the current debate – it is being conducted the wrong way, they say. Muslim feminist Zeynep Duygu Agbayir rails: "We are fed up with the headscarf being turned into an instrument" to win elections – an accusation that includes both the secular CHP and the Islamic-conservative AKP

Turkish society is one step ahead

Unlike their politicians, however, most people in Turkey see no need for any discussion at all about the headscarf. According to a survey conducted by Metropoll polling institute in February 2021, around 83 percent of Turks think that women should be allowed to wear headscarves in the public sector. Just under eleven percent are against it. Even the CHP electorate is more than 80 percent in favour of the right to wear a headscarf.

Around 58 percent of Turkish women wear a headscarf when leaving the house, according to a 2018 IPSOS study. Unlike some other Muslim-majority countries, wearing a headscarf in Turkey is formally the private choice of women – as long as men aren't making it into a big deal again.

Many women simply reject the current debate – it is being conducted in the wrong way, they say. "It is crucial that the rights and freedoms of women are not dependent on whether a particular political party wins an election or not," criticises journalist Nihal Bengisu.

The former headscarf ban that applied in many areas was not bound to legislation, but rather based on procedural rules or arbitrary instructions from superiors. These times must not be allowed to return, emphasises Nihal Bengisu Karaca. That’s why "more robust, permanent steps" are needed to guarantee women's freedom of choice. This could be a law – but it also needs a "change in mentality". The debate is being fuelled from all sides, it is "not only the problem of the conservatives", but a question of democracy. 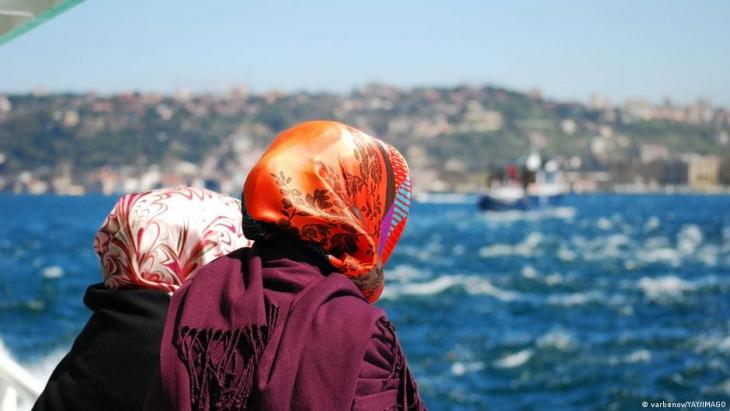 Turkish headscarf debates: "What women wear, whether they want to wear a miniskirt or a headscarf, should finally be liberated from male politics forever," demands activist Ozgul Kaptan from the "Women for Equality" platform. Muslim feminist Zeynep Duygu Agbayir adds that many women already experience enough coercion in their private lives. "There are some women who wear the headscarf voluntarily. But there are also many women who are forced to wear the headscarf" by their families, husbands or brothers. "That is the real issue we should be discussing"

Muslim feminist Zeynep Duygu Agbayir rails, "We are fed up with the headscarf being turned into a tool" to win elections – a charge levied at both the secular CHP and the Islamic conservative AKP.

"What women wear, whether they want to wear a miniskirt or a headscarf, should finally be liberated from male politics forever," demands Ozgul Kaptan from the "Women for Equality" platform.

Many women already experience enough coercion in their private lives, explains Muslim feminist Agbayir. "There are some women who wear the headscarf voluntarily. But there are also many women who are forced to wear the headscarf" by their families, husbands or brothers. "This is the real issue we should be discussing."

Men should not politicise women's private affairs, says activist Kaptan. "Instead, what they should be saying is, 'From now on, we will implement a gender equality policy that ensures that politics does not interfere with a woman's decision about what she wears.' That would be the right message for every woman from every social class."

Istanbulites take pride in being the world’s melting pot and its natural outcome: having a bustling abundance of international cuisine. Visiting restaurants opened by recent ... END_OF_DOCUMENT_TOKEN_TO_BE_REPLACED

The Kurds are under attack from two sides: from Turkey, and from Iran. The situation in their territories in northern Iraq is becoming increasingly desperate. Birgit Svensson ... END_OF_DOCUMENT_TOKEN_TO_BE_REPLACED

Canan Topcu came from Turkey to Germany as a child. In her essay, she describes how bothered she was by the racism she encountered in her country of origin when she travelled ... END_OF_DOCUMENT_TOKEN_TO_BE_REPLACED

According to Turkey’s revised media legislation, spreading "fake news" now carries a prison sentence. The definition of what this entails has been kept intentionally vague. ... END_OF_DOCUMENT_TOKEN_TO_BE_REPLACED

On 3 November 2002, Erdogan's newly founded AKP, Justice and Development Party, came to power in Turkey. It has ruled the country ever since, becoming more authoritarian with each ... END_OF_DOCUMENT_TOKEN_TO_BE_REPLACED

Kurdish journalist Nedim Turfent has been in prison in Turkey since 2016 – because he reported on police violence. A collection of his writings penned while behind bars is now ... END_OF_DOCUMENT_TOKEN_TO_BE_REPLACED
Author:
Burak Ünveren
Date:
Mail:
Send via mail

END_OF_DOCUMENT_TOKEN_TO_BE_REPLACED
Social media
and networks
Subscribe to our
newsletter