Is the End in Sight?

The Turkish government has accelerated efforts to shape a plan to solve the country's long-standing Kurdish problem, but even before the plan's details have been announced the opposition has started to criticize it, a sure sign of the difficulties ahead. By Ayşe Karabat

The Turkish government has accelerated efforts to shape a plan to solve the country's long-standing Kurdish problem, but even before the plan's details have been announced the opposition has started to criticize it, a sure sign of the difficulties ahead. Ayşe Karabat reports 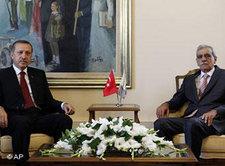 Erdoğan was the first leader to admit the existence of a "Kurdish problem" in Turkey. Under reforms aimed at gaining membership of the EU, the ruling AKP has given Kurds more cultural and political rights

​​ Turkish Interior Minister Beşir Atalay, the coordinator of the government's Kurdish initiative, announced a fortnight ago that work had begun on a comprehensive plan for the solution of the Kurdish problem, a conflict that has cost 40,000 lives during the last 25 years and which lies at the root of much social, political and economic disharmony.

Atalay did not acknowledge the details of the plan but said that it would be given shape after listening to political parties, academics and journalists. He underlined that the plan will be based on further democratization and will be uniquely tailored to the country's own history and conditions.

The minister said that they were examining the Basque and Irish models, but hoping to shape a uniquely Turkish model that could become an exemplary solution for similar problems.

At the beginning of this week Atalay invited seven political parties, both those within and outside Parliament, to a meeting to hear their views on the government initiative, but the two main opposition parties – the Republican People's Party (CHP) and the Nationalist Movement Party (MHP) – were quick to refuse the offer. 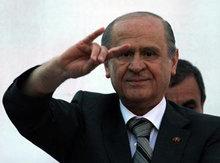 Devlet Bahçeli, leader of the MHP, claimed that Erdoğan was trying to obtain clues about Öcalan's road map by meeting with the DTP

​​ MHP leader Devlet Bahçeli, had already termed the initiative treason, stressing that this kind of effort "aims to bring political and legal legitimacy to ethnic separation."

Deniz Baykal, leader of the CHP, demanded details of the plan "immediately," stating that before such information is provided there is no reason for a meeting with the government.

Meanwhile, during an address to the ruling Justice and Development Party (AK Party) parliamentary group on Tuesday Turkish Prime Minister Recep Tayyip Erdoğan urged party leaders not to turn down the government's request for cooperation.

"Let's solve this problem together with consensus. Don't close your doors to this peace and brotherhood project," stressed Erdoğan, emphasizing that the government plans to shape the plan by taking the various views in society into account.

Who should be on the other side of the table?

However, in early August Erdoğan and DTP officials, including its co-chairpersons Ahmet Türk, Emine Ayna and DTP Parliamentary Group Chairman Selahattin Demirtaş, gathered within the framework of the government's accelerated efforts for the Kurdish initiative. 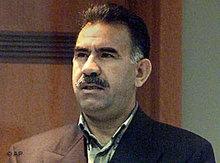 Jailed PKK leader Öcalan, captured in 1999, has said he will announce a "road map" to end the 25-year-old conflict between the state and Kurdish separatist guerrillas that has left more than 40,000 people dead

​​ The meeting came just two weeks before an anticipated announcement by the leader of the PKK, Abdullah Öcalan, who is serving life imprisonment on İmralı Island in the Marmara Sea, regarding his views on the solution. It is expected that Öcalan will reveal his "road map" on August 15, the anniversary of the PKK's first armed attack in 1984.

The meeting between Erdoğan and DTP officials was criticized by the opposition. Bahçeli, leader of the MHP, claimed that Erdoğan was trying to obtain clues about Öcalan's road map by meeting with the DTP.
Baykal showed a similar stance, describing the meeting as in fact one between the PKK and the government.

Both leaders underlined the "counterpart" problem of the initiative: who exactly is going to sit across the table from the government and whether an "counterpart" is even necessary.

Murat Karayılan, a PKK leader based in northern Iraq suggested in an interview in May that the government should address the PKK or Öcalan when searching for a solution. Karayılan added that if addressing Öcalan was not possible, then the government should address the DTP, and if not the DTP, then a group of "wise men" composed of Kurdish intellectuals.

Selahattin Demirtaş, chairperson of the DTP parliamentary group, underlined that if the government is not taking the Kurds as its counterpart its initiative may face failure.

"If the government wants to discuss bringing an end to armed struggle it has to take the PKK as a counterpart; to discuss political matters we [as the DTP] are here. The DTP is not only a political party whose views should be taken into consideration but also has to be treated as one of the main actors in the process," he said.

The first signals of an attempt by Turkey to solve the Kurdish problem were given by President Abdullah Gül in May. He described the Kurdish issue as the "primary" problem of the country: "Everybody in the state is now talking to each other more frequently and openly.

When I say everybody, I mean soldiers, civilians and the intelligence community. In such an atmosphere, good things happen. There is an opportunity and it should not be missed."

According to Sedat Laçiner, chairman of the Ankara-based International Strategic Research Organization (ISRO), Turkey has never been so close to solving the Kurdish issue, and the biggest different between the opportunity that Turkey is now presented with and previous ones can be found in the "unity" that Gül mentions:

"Now there is a unity among the different organs of the state. I am not saying that there is a consensus on the issues, but at least the inner quarreling has ceased." 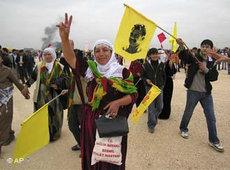 Newroz Day, which marks the arrival of spring, has become a platform for the Kurdish community to demand greater freedoms and voice support for the for the outlawed Kurdistan Workers' Party (PKK)

​​Laçiner also underlined that two ongoing court cases contributed to preparation of the ground for the Kurdish initiative. The first is the so-called "Ergenekon" trial the investigation of which, according to Laçiner, had itself paved the way for the initiative by silencing the sources of power that are against the solution.

The trial involves the underground and ultranationalist Ergenekon network, which was allegedly aiming to overthrow the government by provoking chaos, including civil conflict between ethnic Turks and Kurds.

As the investigation goes deeper, drawing in prominent figures from journalists to retired senior military staff, the public has started to hear of many provocative acts organized by Ergenekon in which Kurds were the victims.

Some segments of society think the investigation is a government witch-hunt, targeting its nationalist opponents, while others regard it as an opportunity to redress impunity and uncover corruption in the state.

According to Laçiner the second investigation that prepared the ground for the Kurdish initiative started in mid-April, when the police arrested around 250 people, most of them members of the DTP. The security forces claimed that the operation targeted the "urban extensions" of the PKK.

"Through these two operations the radical elements among the Turkish and Kurdish nationalists who might object and prevent the solution have been silenced," Laçiner explained.

Not only the domestic but also the international atmosphere is suitable for the solution of the Kurdish problem, as conservative Kurdish writer Altan Tan emphasized. He recalled that the US administration is about to withdraw its military forces from Iraq and does not want any conflict in the region.

When it comes to US wishes regarding the region, Tan underlined that they are not limited to hopes for a problem-free area. "The US administration also wants Turkey to take an active role in the future of northern Iraq, which is possible only if Turkey solves its own Kurdish problem," he argued.

Tan also underlined that all sides of the conflict are tired of fighting and have realized that it is not possible to get anywhere with violence.

Plan rumored to include regulations on Kurdish language

Regulations about the Kurdish language are anticipated to be an important part of the government's solution package. Erdoğan has said in the past that education in Kurdish was out of the question, but the new initiative could envisage elective Kurdish courses in public schools in the long term. The removal of obstacles to the use of Kurdish in private broadcasts is another possibility.

The reversion of place and settlement names to their original Kurdish titles, if supported by a ballot among residents, could also be on the cards.

According to rumors, the government's new initiative aims to tackle the amnesty issue – concerning former PKK members – on a number of different levels. Separate plans are said to exist for leaders, ordinary members and for those living in Europe. Exile is a possible option for leaders, while members may be permitted to return home without trial.

However, no one expects anything new in terms of the sentencing of PKK leader Öcalan except the possible easing of the conditions of his imprisonment.

Legal Proceedings against Politicians in Diyarbakir
Multilingualism as a Separatist Crime
Public prosecutors in Turkey are bringing an increasing number of politically motivated court cases against Kurdish local politicians in south-east Anatolia who are standing up for the recognition of the cultural and social rights of the Kurds. The charge is always the same, namely the dissemination of separatist propaganda. Ömer Erzeren has the details

Kurdistan: In the Shadow of History
Tribute to a Forgotten People
Photo book, historical document and reference work for ethnologists in one … With the assistance of the renowned Kurdologist Martin van Bruinessen, Magnum photographer Susan Meiselas has produced a comprehensive photo book that gives readers a better understanding of various aspects of Kurdish history and culture. Élena-S. Eilmes sums up the book

END_OF_DOCUMENT_TOKEN_TO_BE_REPLACED
Social media
and networks
Subscribe to our
newsletter