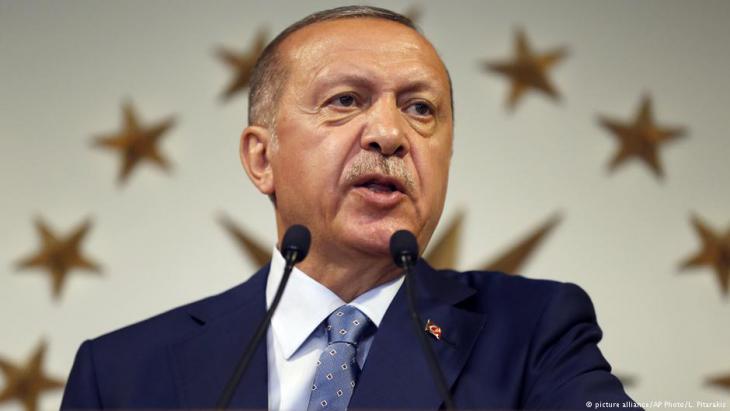 Turkey's new presidential system officially came into force on Monday, giving President Recep Tayyip Erdogan powers that no democratically elected leader of Turkey has ever had. The inauguration was preceded by another mass purge of the civil service. By Aram Ekin Duran

On Monday 9 July, President Recep Tayyip Erdogan took his oath of office in parliament. With that, Turkey officially moved from a parliamentary to a presidential system. The day before, Erdogan had issued a decree dismissing more than 18,600 civil servants, including almost 9,000 police officers, around 6,000 members of the armed forces and 199 academics. This is likely to have been his last decree before the state of emergency imposed after the coup attempt in July 2016 is lifted. It is anticipated this will happen soon, in line with Erdoganʹs election promise.

Just 13 years have passed since Turkish officials started EU accession negotiations. At the time, it seemed that democracy, freedom of expression and social harmony were growing.

Now, however, Turkey is preparing to endow its increasingly Islamist, nationalist and authoritarian president with an unprecedented amount of power. The abolition of parliamentary control gives Erdogan sole power over the executive branch of government. And, through his power to appoint important judges, he will also control the judiciary.

Ersin Kalaycioglu, a senior scholar at Sabanci University's Istanbul Policy Centre, said the potential consequences remained unclear. "So far, the new system has only been discussed with us in broad lines," Kalaycioglu said. "This means that neither the public nor political scientists know the exact details."

Erdogan has repeatedly stressed that other democracies also have presidential systems. However, Turkey's differs considerably from the presidential and semi-presidential systems of government found in the U.S. and France. In the United States, for example, the president does not have the power to dissolve Congress. Erdogan, on the other hand, can dissolve parliament and call elections. In France, parliament appoints the members of the Constitutional Court. In Turkey, on the other hand, the president makes the decisions concerning the highest court in the land. 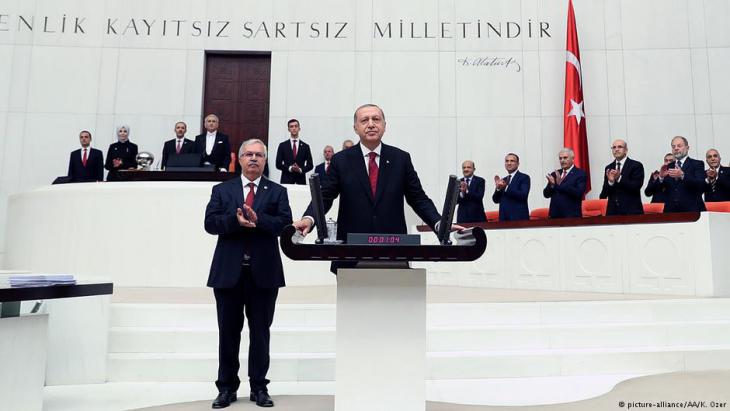 Carte blanche to rule: on 09.07.2018, Recep Tayyip Erdogan was once again sworn in as president, yet now he holds more executive power than any previous Turkish head of state. Erdogan took his oath of office at a ceremony in the Ankara parliament. With the constitutional amendments in force, he assumes leadership of the government; the office of Prime Minister has been abolished. The president is also able in part to circumvent parliament by issuing decrees

Ersin Kalaycioglu points out that Turkey's presidential system caters to autocratic tendencies. "Both the U.S. and French systems are characterised by a strong civil society," he said. "We don't have that."

Erdogan will now also be able to regularly issue presidential decrees. He had previously only been allowed to do so under the rules of the ongoing state of emergency in the wake of the failed July 2016 coup. Now the president will be able to overrule the judiciary at any time.

The oversight of an independent and impartial judiciary will therefore be effectively impossible. The political scientist Dogu Ergil shares Kalaycioglu's fears. He believes that the separation of powers and the independence of the judiciary have been abolished.

There is also the question of whether Erdogan's alliance with the Nationalist Movement Party (MHP) in the elections on 24 June will increase domestic tensions. Many fear that the hostile stances taken by the MHP, especially toward Kurds, and the party's rejection of certain established democratic values could create an even more nationalist atmosphere in Turkey. Erdogan needs the MHP in order to have a parliamentary majority. This could prove the biggest obstacle to finding a peaceful solution to conflict with Kurdish groups and to Turkey's efforts to meet EU requirements. 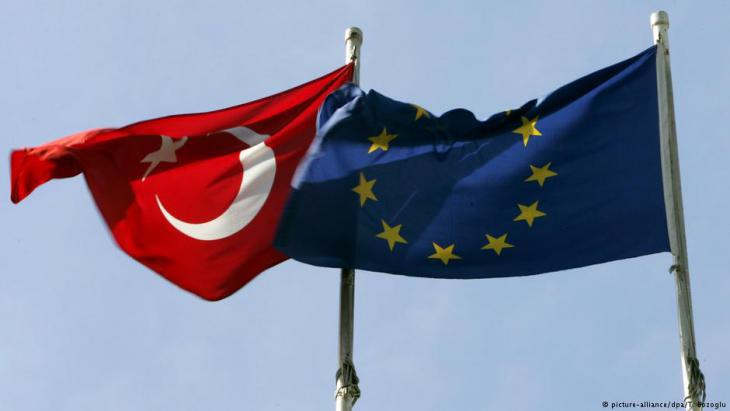 Poor prospects for EU accession talks with Turkey: Turkish President Recep Tayyip Erdogan recently confirmed his country's desire to join the EU and declared that accession would remain a strategic goal. In practice, however, discussions on this issue have been on ice for some time because of Turkeyʹs domestic political situation. In its most recent report on the country's readiness to join the EU, published in April, the EU Commission issued Turkey with its worst assessment to date. It confirmed serious setbacks in the rule of law, freedom of expression, not to mention independence of the Turkish judiciary

Turkey officially applied for EU membership in 1999, and negotiations began on 3 October 2005. However, little progress has been made over the past 13 years. Negotiations were basically halted after the state of emergency was declared two years ago. The Dutch politician Kati Piri, the European Parliament's Turkey rapporteur, favours an official suspension of accession negotiations.

While Turkey's EU accession process is in danger of being indefinitely suspended, its relations with the United States are also increasingly difficult. Fethullah Gulen, accused by Erdogan of being the mastermind behind the attempted coup in 2016, lives in the United States. The U.S. is working with a Kurdish militia group in Syria that Erdogan regards as a terrorist organisation. And Turkey is planning to buy S-400 missile systems from Russia despite NATO opposition. All this has led to the current diplomatic impasse.

Dogu Ergil pointed to recent opinion polls that show the United States even less popular in Turkey than it is in Iran. He said increasingly hostile attitudes toward the U.S. and EU were spreading in Turkey – even independently of Erdogan's policies.

Home
Print
Newsletter
More on this topic
After the elections in Turkey: There may be trouble ahead Turkeyʹs election results: Erdogan and the three-way splitThe Gulen movement and the failed coup in Turkey: Harmless is not the word
Related Topics
Democracy and civil society, European Union (EU), Fethullah Gulen, Justice and Development party (Turkey), Recep Tayyip Erdogan, Turkey and the EU
All Topics

Many Turks are dissatisfied with the international status of their country. At the same time, opinion polls reveal great scepticism among the Turkish population towards the USA. ... END_OF_DOCUMENT_TOKEN_TO_BE_REPLACED

Very different Western reactions to the suffering in Ukraine and the Arab world show that there is a profound rift among cultures. Essay by Michael Young END_OF_DOCUMENT_TOKEN_TO_BE_REPLACED

Since Spain abandoned its traditional neutrality towards the conflict in Western Sahara, Morocco has announced a "new phase" in relations between the two countries. But what is ... END_OF_DOCUMENT_TOKEN_TO_BE_REPLACED

Tunisia's president has been carrying out a coup by degrees, demolishing the country's hard-fought democratic gains bit by bit. With an economy in turmoil and a splintered ... END_OF_DOCUMENT_TOKEN_TO_BE_REPLACED

From the Euphrates to the Mekong, dams that ensure one country's water supply risk leaving others parched. But shared water resources can be a source of peace as well as conflict ... END_OF_DOCUMENT_TOKEN_TO_BE_REPLACED

Middle Eastern countries are still on the fence when it comes to the Russian invasion of Ukraine. Their citizens point to the West's double standards surrounding conflict and ... END_OF_DOCUMENT_TOKEN_TO_BE_REPLACED

Erdogan does not solely appoint all the members of the supreme court, but only a number of them. Presidential decrees are checked by laws to be passed by the parliament, and the president cannot issue presidential decrees whimsically; he cannot issue presidential decrees that are contradictory to parliamentary laws, individual rights, and other basic democratic premises: If Erdogan dissolves parliament he will have dissolved his presidency as well, or his first presidential term, if it is his first term (he is allowed to run only twice for the office): Moreover, it is a two-way street, to wit, the parliament can dissolve his presidency as well, in which case, however, he will not lose a term of office and will still be entitled to run for two consecutive elections. All presidential decrees are subject to be taken up to legal institutions. As for the Kurdish issue, as far as I can see the government admits the fact that the Kurds are, as are all other citizens of different ethnic denominations, entitled to the same rights of citizenry and are allowed to pursue what they deem to be their rights through democratic and political means. The current political entity which allegedly represents the Kurdish segment is, however, unarguably tainted through its close and irrefutable affiliation with the Kurdish separatist PKK group, viewed by both Europe and the United States as a terrorist organisation. People keep spouting about how Islamist, nationalist, and authoritarian Erdogan is: but what has he done Islamically so far? There is more than enough domestic opposition to his non-Islamic politics! Nationalist? Can you please point to a single policy implemented by Erdogan during the last 16 years that would substantiate your claim? Bear in mind the state of affairs prior to his term. Authoritarian? Well, 52.5 percent gave him the mandate yet after 16 years of his ruling. He has fought about 13 elections so far and has won all of them, people gave him a clear mandate as president and he simply uses the powers invested in the presidency. Investigative journalism should really, really focus on the imbecile opposition in Turkey. I may come to see eye-to-eye with you about some of the issues concerning the government, but the bigger problem in Turkish politics is the opposition's political torpor. Erdogan owes much of his success to the opposition itself!

END_OF_DOCUMENT_TOKEN_TO_BE_REPLACED
Social media
and networks
Subscribe to our
newsletter