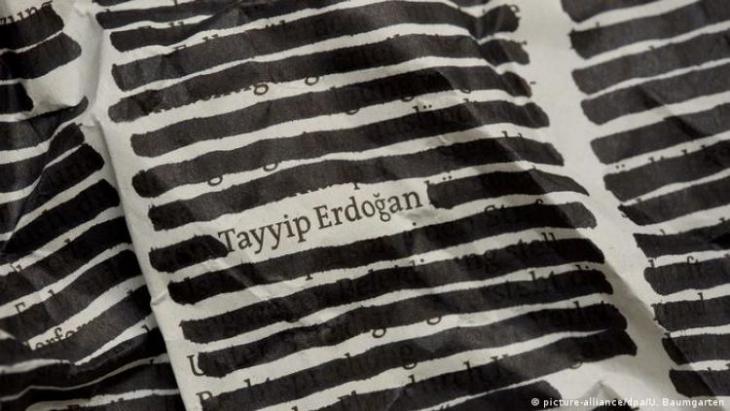 Turkey’s new media law
Censorship by any other name

The Turkish parliament witnessed an unusual act of protest last month: an opposition MP smashed his smartphone with a hammer while giving a speech from the podium. Claps and chants followed. And when the clapping didn’t stop, parliament was forced to take a break before returning to the chamber to pass the bill.

Referred to, rather ironically, by the government as the "disinformation" act, many Turks simply view this latest piece of legislation as censorship.

Back in January 2022, the ruling AKP claimed that a campaign of disinformation was being waged against them, that those involved were deliberately sabotaging their efforts to make Turkey a more developed and secure place, and by extension, were therefore attacking the country itself.

Their solution: amend the country's media laws. Facing considerable opposition – from both the general public and parliamentarians alike – they decided to wait until parliament re-opened in the autumn before introducing the bill.

The amendments were passed on 14 October, with the majority of votes in favour cast by the ruling party and their ally, the Nationalist Movement Party (MHP). The new law has been met with outrage and dismay.

Pressure on the press

Article 29 stipulates a one-to-three-year prison sentence for those "who spread false information about Turkey’s domestic and national security, public order or health, simply to create fear, panic or to disturb the public peace".

A spokesperson for Reporters Without Borders (RSF) confirmed to Qantara.de that Turkey is already one of the world’s leading jailers of journalists. At least 27 media workers have been arrested since June 2022: "Many observers thought it couldn't get any worse – but it did. Now, there is another vaguely-worded blanket law that can be used massively by the authorities to suppress under false pretext any journalistic contents that may displease them."

"We and other observers estimate that 90% of the national media in Turkey is now under government control. But this law will actually make it even more difficult for opposition views to be heard, and for the public to benefit from balanced news coverage."

Turkey has not been a haven for journalists lately, but this legislation will inevitably mean more repression, with detention given a legal basis. Moreover, the law impacts the freedom of expression of every Turkish citizen. 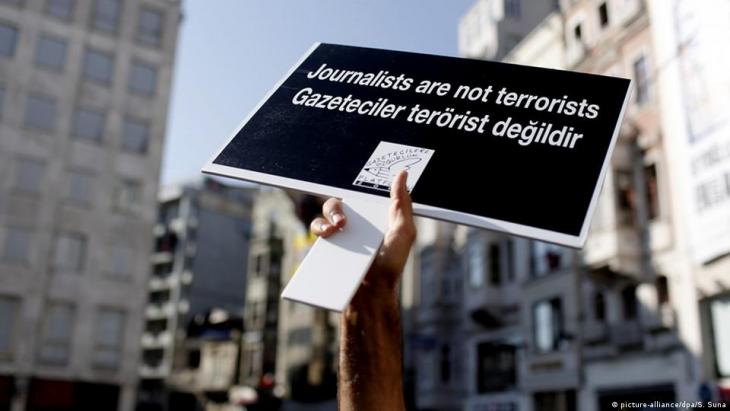 Reporters Without Borders confirms: at least 27 media workers have been arrested since June 2022: "Many observers thought it couldn't get any worse – but it has. Now there is another vaguely-worded blanket law that can be used massively by the authorities to suppress under false pretext any journalistic contents that may displease them"

The RSF spokesperson added that "it is an attack on democracy that is at work – precisely where the authors of the law claim to defend it. This law is likely to be used against human rights defenders, members of the opposition, and any critical voices".

The main opposition party, the Republican People’s Party (CHP), whose MP Burak Erbay smashed his phone with a hammer, believes the AKP is trying to prevent people from voicing their grievances relating to the government in the run-up to next year's elections.

The fact that a case was opened against leader of the CHP opposition Kemal Kilicdaroglu immediately after parliament passed the bill is cited as proof. CHP MP and former journalist Utku Cakirozer says the various articles included in the amended legislation are designed to increase the pressure on free speech and media across the board:

"The law aims to control all the platforms for communication and social media. They are targeting a broad swathe of society, not just journalists. Now people will be afraid of texting their friends about politics and will refrain from sharing government-critical posts on social media. That will lead people to self-censor. They are doing it because of the upcoming elections. In order to silence any opposition and criticism, they are limiting a basic human right."

“The fact that the first person facing an investigation under the new law is CHP leader Kilicdaroglu is no coincidence. They are demanding a prison sentence for him, which will make ordinary people even more scared to talk.” 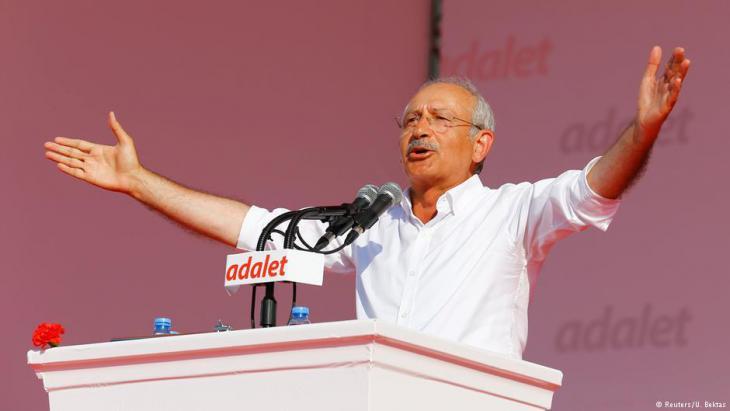 More democracy and truth? Opposition MP Utku Cakirozer pours scorn on the official AKP line: "The fact that the first person facing an investigation according to the new law is CHP leader Kilicdaroglu is no coincidence. They are demanding a prison sentence for him, which will make ordinary people even more scared to talk." Kilicdaroglu appears to have been targeted for claims he made in May 2022 about the Erdogan family transferring millions of lira to U.S. for visas to flee Turkey to avoid prosecution in the event of a change in government

Erdogan’s AKP, on the other hand, has defended the bill, claiming they brought the amendments to parliament for "more democracy and truth".

AKP MP Ahmet Ozdemir, who tabled the motion, says that "it is not fair to call the legislation a censorship law, because it doesn’t limit the use of social media. Article 29 stipulates that if the thought or disinformation being spread leads to an act that either violates public order or presents a tangible threat of such violation, it will be considered a crime". He maintains that if such implications are absent, there will be no judicial process.

CHP MP Cakirozer, however, refuses to believe these statements, arguing that a case has still been opened against Kilicdaroglu, despite the fact that there is no indication his comments provoked any public disorder.

According to the amendments, any media worker found guilty of "terror charges" or "not following media ethics" will have their press card confiscated. The directorate of communications, which answers to the presidential office, under President Recep Tayyip Erdogan, leader of the AKP, will decide whose cards are suspended and for how long.

A warning to citizen journalists

Director of Communications Fahrettin Altun gave a speech before the bill was passed, warning journalists: "I regret to see that some journalists are not following a national and patriotic path, but prefer to act as the voice of other global powers."

He also had a warning for citizen journalists: "With digital opportunities, citizens are now creating content. But they do not verify what they are post or share, and thus they serve to distort the truth." 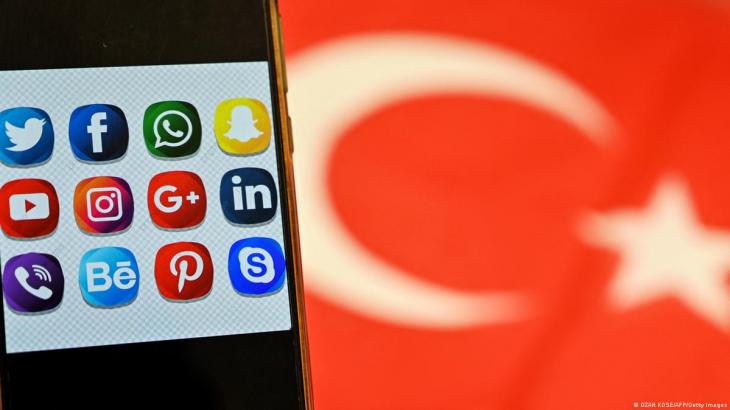 The CHP has applied to the Constitutional Court, claiming the new law violates freedom of speech, which is protected by Turkey’s constitution. Media lawyer Veysel Ok, who is currently defending several journalists under arrest in Turkey, confirmed that not only does the law violate the Turkish constitution, but it is also at variance with all other legislation and regulations relating to the media currently in force:

"First of all, Article 29 says that any information that misleads society will be subject to a prison sentence. But it is very vague, it doesn’t give any definition relating to that kind of information. How will the judges or prosecutors investigate or research to determine that? The law provides no details on that, leaving the way wide open for the judiciary."

This comes as no surprise to CHP MP Cakirozer, who says the judiciary is mostly under the influence of Erdogan and the AKP and tailors its decisions to please them.

Veysel Ok continues that the media law also contravenes European Court of Human Rights legislation since it violates the principle of freedom of speech: "The law prevents people from sharing any information, retweeting any posts on social media, or talking about anything the government doesn’t control or approve of. Everyone's right to demand and obtain information is restricted – and that includes ruling party members."

But he also questions whether the Constitutional Court is the right forum for overturning this new media law before it creates trouble for Turkish society. "I don’t believe the Court will come up with a detailed, clear solution. Even if it overrules some articles of the law, it will take considerable time and by then, I doubt it will have much impact."

Canan Topcu came from Turkey to Germany as a child. In her essay, she describes how bothered she was by the racism she encountered in her country of origin when she travelled ... END_OF_DOCUMENT_TOKEN_TO_BE_REPLACED

On 3 November 2002, Erdogan's newly founded AKP, Justice and Development Party, came to power in Turkey. It has ruled the country ever since, becoming more authoritarian with each ... END_OF_DOCUMENT_TOKEN_TO_BE_REPLACED

Kurdish journalist Nedim Turfent has been in prison in Turkey since 2016 – because he reported on police violence. A collection of his writings penned while behind bars is now ... END_OF_DOCUMENT_TOKEN_TO_BE_REPLACED

A survivor of a neo-Nazi hate crime, Mevlude Genc's boundless compassion served as an inspiration to an entire generation. Sertan Sanderson explores how her death is a loss for ... END_OF_DOCUMENT_TOKEN_TO_BE_REPLACED

Sufism has fluid boundaries. Just like Islam, Sufism is inconceivable without its late antique roots. Then again, it has also exerted an influence on Hinduism. Moreover, the Sufic ... END_OF_DOCUMENT_TOKEN_TO_BE_REPLACED 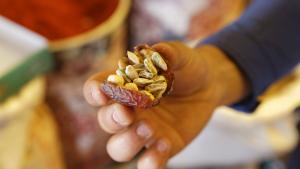 Baklava, but not for beginners

END_OF_DOCUMENT_TOKEN_TO_BE_REPLACED
Social media
and networks
Subscribe to our
newsletter