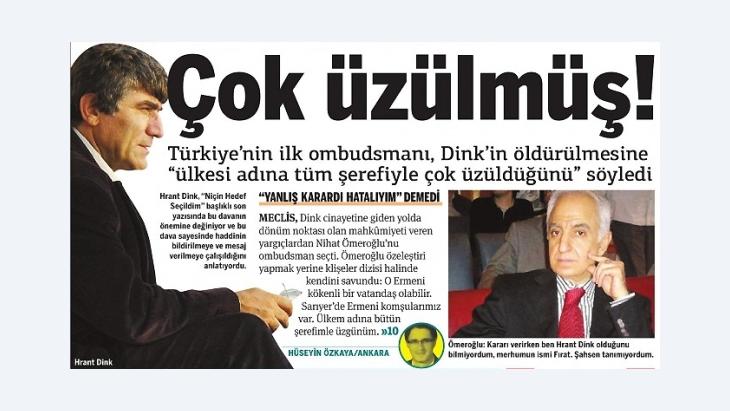 The first chief ombudsman of Turkey, appointed to ensure the administration acts in line with a sense of justice based on human rights, has sparked public outcry due to his role in the conviction of the late journalist Hrant Dink. The new ombudsman also faces accusations of being too close to the government. Fatma Kayabal reports from İstanbul

While Mehmet Nihat Ömeroğlu, a retired member of the Supreme Court of Appeals and the first ombudsman of Turkey, was taking an oath of neutrality in parliament on 5 December, opposition deputies gave him a hostile reception. Some turned their backs, while others drummed on their tables.

Deputies from the main opposition Republican People's Party (CHP) held up signs bearing the slogan "Akbudsman", the "AK" being a play on the name of the ruling Justice and Development Party (AKP) and thereby implying that Ömeroğlu would be far from impartial.

But most of the criticism directed at Ömeroğlu is due to his role in a Supreme Court of Appeals verdict against slain Turkish Armenian journalist Hrant Dink. Ömeroğlu was one of the judges who approved the sentencing of Dink under the notorious Article 301 of the Turkish Penal Code, which outlaws "publicly denigrating" the Turkish nation. 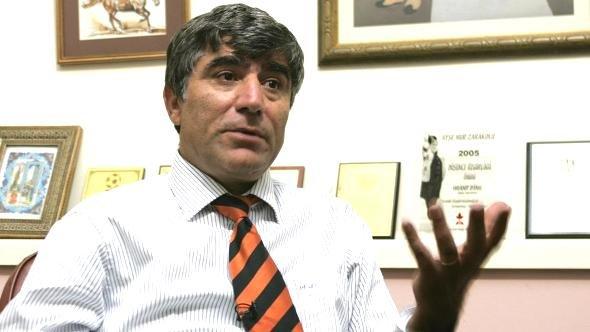 "The judiciary cleared the way for his death": Dink, one of the most prominent voices of Turkey's shrinking Armenian community, was killed by a gunman on 19 January 2007 at the entrance to his newspaper's offices. Dink had gone on trial numerous times for speaking out about the mass killings of Armenians by Turks at the beginning of the 20th century. He had received threats from nationalists, who viewed him as a traitor

​​Dink was later shot dead by an ultranationalist youth in front of the offices of the Armenian weekly newspaper "Agos" in Istanbul in January 2007. The perpetrator of the attack, Ogün Samast, said he had been motivated by Dink's "insulting Turkishness" – another phrase from Article 301.

The infamous article was amended by parliament a year after Dink's assassination.

Speaking to the media after Ömeroğlu's election by parliament on 27 November, Dink's brother, Hosof, said the appeals court verdict had been a "death sentence" for journalist Dink. "Instead of calling those who gave this verdict to account, they are rewarded," he said.

In a 2010 ruling on the Dink case, the European Court of Human Rights underlined that "the approval, by the Supreme Court of Appeals, of the penalty given to Hrant Dink because of Article 301 of the Turkish Penal Code is a violation of freedom of expression." The court also stated that the article was used like a weapon against Dink, that the 301 case cleared the way for his death, and that the state had taken no action to protect the journalist.

In an article published on 28 November, Özgür Mumcu, a columnist for the daily newsaper "Radikal" and a lecturer in law at Galatasaray University, outlined why in his view, Ömeroğlu is unsuited to his new role.

"A judge who found an 'insult to Turkishness' in the article that Dink wrote for the Armenian diaspora and which said, in short, 'Do not dwell on the Turks; instead of that, strengthen your ties with Armenia,' is now the chief public auditor […] As a person whose decision has been registered by an international court as being against human rights, he is to audit the public administration from the point of justice."

In response to criticism of the controversial Dink verdict, Ömeroğlu said he had not even been aware that the name in that case was "Hrant", since it was written as "Fırat" – Dink's name on the registered documents. But the ombudsman's defence led to further questions, since the court documents did in fact bear the name Hrant in parentheses next to his official name, Fırat.

"It is not clear how he intended to clear his name with such a foolish remark, given that it makes little difference whether it was Dink, or anyone else, involved in a case that concerned state interference in the right to free expression […] This left Ömeroğlu looking like a liar at worst or as someone who was at best not in full command of his job on the Supreme Court of Appeals," Semih İdiz wrote in a column for the daily newspaper "Hürriyet" on 6 December. 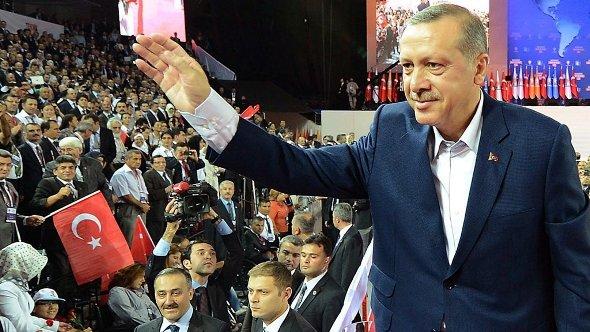 After instigating a number of progressive reforms, Turkey's government under prime minister Erdogan has been severely criticized for political back-pedalling and cultivating an authoritarian leadership style

​​Opposition parties are also questioning Ömeroğlu's neutrality, pointing out the fact that the witness at his son's wedding was Prime Minister Recep Tayyip Erdoğan. They also underline that his son works at the state-owned aviation firm Turkish Airlines (THY). It is Ömeroğlu's responsibility to review possible complaints about public institutions, including the THY. Parliamentary Speaker Cemil Çiçek also proposed Ömeroğlu for the position of undersecretary during his former post as justice minister.

The presentation of his résumé to parliament has also come under fire, since included details such as the fact that he does not drink or smoke, two qualities highly appreciated by Prime Minister Erdoğan but certainly not compulsory for a job application in a secular country like Turkey.

The EU has long demanded the introduction of an ombudsman's office in Turkey, and this was added to the constitution via a referendum on 12 September 2010. The authority is expected to examine, research and provide input on all kinds of operations and activities, as well as monitoring the attitude and conduct of the administration, determining whether it is functioning in line with a sense of justice based on human rights, as well as being fair and in accordance with the law.

However Ömeroğlu seems to believe that the office of ombudsman in Turkey is not inspired by Europe, but that in fact Europe was inspired by the Ottoman justice system.

In an interview with the Anatolia news agency the day after his election to the post, he referred to Swedish King Charles XII and his exile in İstanbul at the beginning of the 18th century. It was there that the king had the opportunity to examine the Ottoman justice system, and decided to adapt the "chief qādi" (kadı in modern Turkish) concept as the basis of the ombudsman system, Ömeroğlu claims.

Ömeroğlu's critics note that the role of the chief qādi at the time was to ensure that the administration's decisions were in accordance with Sharia. They also underline the fact that the chief qādi was an instrument of the state, whereas an ombudsman's office should be just the opposite.

As İdiz also noted: "The gap between the AKP's claim to be instituting 'advanced democracy' in Turkey and the actual situation on the ground continues to grow. The recent election of the country's first ombudsman, required for Turkeys' European Union bid, is one of the latest indications of this, though by no means the only one."

Normally the election of an ombudsman should be a joyous event, signalling, as it does, a genuine step toward 'advanced democracy', İdiz further notes. "But this is Turkey where it is possible to take the most noble of institutions and corrupt its meaning and function in ways that defeat the purpose of the exercise," he says.

Home
Print
Newsletter
More on this topic
Erdogan and the Death Penalty: A Message to Europe, a Warning to KurdsErdogan's Authoritarian Drift: Retreat from Democratic AchievementsTurkey's Military versus the Government: From Military Tutelage to Civilian Authoritarianism?
Related Topics
Democracy and civil society, Freedom of the press, Human rights, Justice and Development party (Turkey), Media in Turkey, Recep Tayyip Erdogan, Turkish opposition
All Topics

Political analyst Taqadum al-Khatib argues that Egypt can, in co-ordination with its European partners, develop a common vision to solve the complex conflict in Libya. For this to ... END_OF_DOCUMENT_TOKEN_TO_BE_REPLACED

At the suggestion of his Arab students, Israeli psychologist Ofer Grosbard created the project "Quranet", which uses texts from the Koran to solve educational problems in schools ... END_OF_DOCUMENT_TOKEN_TO_BE_REPLACED

Libyans have mixed feelings about the EU. On the one hand, they admire what Europeans have achieved, but on the other, they feel let down. Moutaz and Walid Ali report from Tripoli END_OF_DOCUMENT_TOKEN_TO_BE_REPLACED

Turkey's President Erdogan wants to create a second Bosphorus. The cost to the economy and environment would be enormous – and that's why Istanbul's mayor is attempting to stop ... END_OF_DOCUMENT_TOKEN_TO_BE_REPLACED

Libya is in turmoil and no political solution is in sight. The EU's inability to take concerted action in the country, meanwhile, is being exploited by third parties, such as ... END_OF_DOCUMENT_TOKEN_TO_BE_REPLACED

Contemporary artist Mona Hatoum is one of those figures whose presence in western capitals stimulates much attention and critical writing, while her exhibitions in Arab cities ... END_OF_DOCUMENT_TOKEN_TO_BE_REPLACED
Author:
Fatma Kayabal
Date:
Mail:
Send via mail