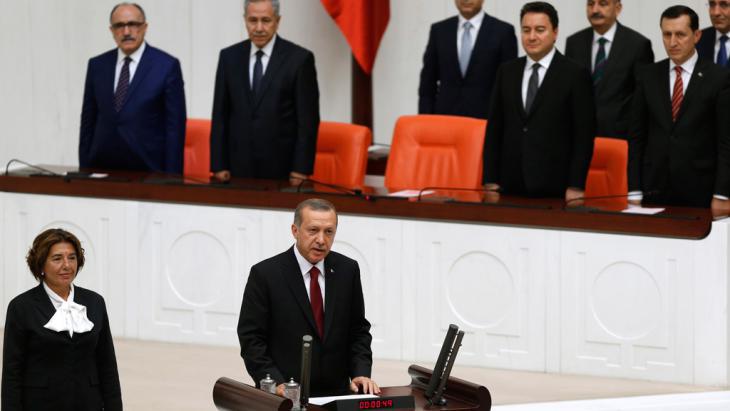 Where to now, President Erdogan?

Following his recent victory in Turkey's presidential election, Recep Tayyip Erdogan announced plans to pursue the process of democratisation in Turkey and the nation's efforts to join the EU. But his political opponents say all he's really interested in is the consolidation of his own power and the conservative-Islamic restoration of Turkey. An essay by Cemal Karakas

As expected, Recep Tayyip Erdogan won Turkey's presidential election on 10 August, capturing 52 per cent of the vote. Voter turnout was low by Turkish standards, with just 74 per cent of the electorate casting their ballots. This means that around 21 million of the roughly 55 million people entitled to vote came out in support of Erdogan.

This is nevertheless an impressive result for the leader of the Justice and Development Party (AKP) when one considers that he (or more accurately, his family), are facing massive corruption accusations. Despite this, Erdogan used the dominance of his one-party government, which has held since 2002, to fight the election campaign via state and AKP-loyal media and allowed his opponents little scope for development. This was rightly criticised by international election observers.

But none of this explains the renewed success of the AKP, which has won three parliamentary elections, two presidential elections, three local polls and a constitutional referendum since 2002. So how can Erdogan's election victory be explained? And what can Turkey expect from its new president?

Economic and social reforms as a recipe for success

Erdogan and his AKP have succeeded in giving Turkey the longest economic boom in its history. Foreign investment has multiplied to more than US$400 billion since 2002. That's much more than in the previous 60 years. In addition, per capita income has tripled to around US$12,000.

Quite a number of infrastructure measures have been taken during that time too: for example, the construction of expressways and bridges and improved access to electricity and running water. Unemployment and inflation have also been pushed down, and a statutory health insurance introduced – measures that first and foremost benefit poorly-educated sections of society on low incomes.

The second reason lies in the democratic reforms that were realised in the first (and partially in the second) legislative period in particular. Where Erdogan's pro-western and Kemalist predecessors failed, the AKP leader succeeded in starting EU accession negotiations (which have been ongoing since 2005) and achieving reconciliation with the Kurdish minority, whose distinct identity was at last recognised and their cultural rights expanded. 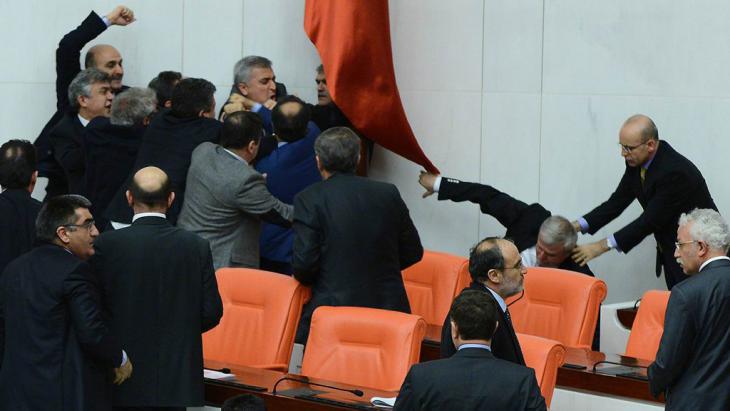 Fisticuffs in parliament: during a debate about controversial legal reforms, members of the AKP and CHP came to blows in the parliament in Ankara in February 2014. According to Cemal Karakas, the opposition in Turkey is weak, which is one of the reasons why the ruling AKP is so strong

In addition, a variety of decision-making powers was withdrawn from the military, the death penalty was abolished and the right to wear headscarves when studying or working in the public sector was also strengthened.

When one considers both these reasons – the socio-economic upturn and the initiated democratic reforms – it becomes clear why in parts of the Islamic world, AKP policies are regarded as a "model" and why this party continues to enjoy such popularity in Turkey, where many people feel a prevailing sense of gratitude towards the AKP and first and foremost towards Erdogan.

Democracy not perceived as a norm

The fact that now and again, a blind eye is turned to the AKP's various economic and political transgressions – for example, the aforementioned corruption accusations, or Erdogan's authoritarian treatment of the Gezi Park protesters, as well as restrictions imposed on press freedom and freedom of expression – can also be explained by the two other factors, namely the political culture of the nation and its weak political opposition.

Turkey's political culture is primarily influenced by nationalism (or more specifically Turkishness), Sunni majority Islam, pronounced ideas on centralism and the desire for strong political leadership figures. Concepts such as liberalism, the rule of law, interfaith dialogue or the capacity for self-criticism are largely alien.

Given this situation, democracy and democratisation are seen primarily as instruments for the assertion of individual preferences and less as a norm. Political attacks are countered with mistrust, stereotyped thinking and revanchism – with independent action being virtually extrapolated from the latter.

So now, whenever the AKP and Erdogan are confronted with corruption accusations, one often hears that the charges either represent a "campaign" by the opposition, or that other parties and politicians are themselves no less corrupt. The same applies to accusations of political patronage and nepotism by the AKP government which, through its long-term one-party dominance, holds the monopoly on the allocation of public contracts and has fostered close ties with various public and private media outlets.

An opposition on the political margins

In addition to this, for more than 10 years, the opposition has not understood how to match the AKP either in terms of personnel or as regards policies. On a policy level in particular, there have been many instances where a different approach to that of the AKP could have been highlighted, namely the continued forcing of the EU accession process, the bolstering of rights for Christians and Alevis, the expansion of media freedom and freedom of expression, the ever-increasing gap between rich and poor, energy and environment issues or amendments to Turkish foreign policy, which has hit some turbulence since the upheavals of the "Arab Spring" and suffered a huge loss of credibility. 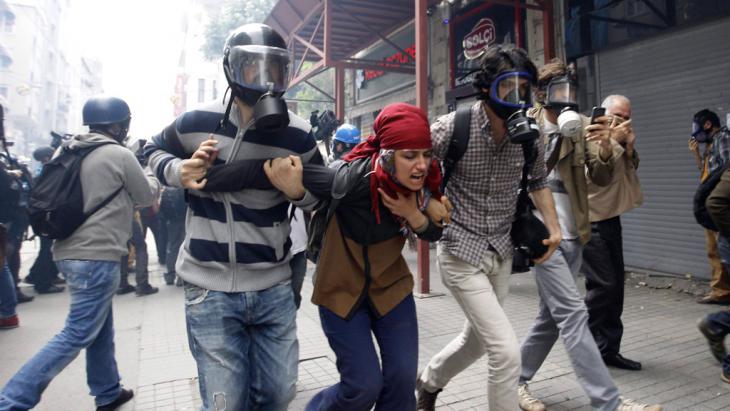 Crackdown: during the Gezi Park protests in the summer of 2013, the police used tear gas against peaceful demonstrators. To this day, the AKP is criticised for its uncompromisingly tough approach to the activists

What should Turkey expect from President Erdogan? Erdogan is trying to portray his election victory as the first step towards a new future. According to the constitution, however, the president is "only" the highest representative of the (Kemalist) state and has few executive and nomination powers. His duties are more or less comparable with those of the president of the Federal Republic of Germany.

Despite the misgivings of several constitutional experts, Erdogan believes that his direct election to the post of president by the people gives him the legitimacy to bestow new powers upon the office. But it is not that easy for a president to grant himself additional powers; it requires a constitutional amendment and for this, Erdogan needs a two-thirds parliamentary majority.

The imminent "Putinisation" of Turkey?

But in principle, a presidential system is not a bad thing as long as it follows the example of France. It does, however, become problematic if it follows the example of Russia. In this case, the "Putinisation" of Turkey could continue to manifest itself. Although there is currently no majority for the introduction of a presidential system, this could change with the 2015 parliamentary elections.

Nevertheless those interested in such a profound overhaul of the political system should not forget that Erdogan or the AKP will not govern forever. At some point, a Kemalist politician will once again be president and he would then benefit from the new system in a manner that suits his own interests.

It remains to be seen how Erdogan will handle his new role without an amendment of the constitution. His announcement that he intends to appoint more than 1,000 new advisers and employees indicates that he will be a governing president. For the sake of form, all he then needs is to appoint a prime minister who – as in Germany, must be a member of parliament and requires a parliamentary majority – will then serve as his "assistant".

The function of Erdogan's "extended arm" will be assumed by the former Foreign Minister Ahmet Davutoglu, in his capacity as new prime minister. As a loyal companion of Erdogan, it is thought unlikely that Davutoglu will pursue his own agenda.

If one considers Erdogan's remorseless dealings with his critics in politics, business and society over the last three years, one can only hope that as the nation's highest representative, he will in future adopt a more conciliatory stance. His rhetoric following his historic election victory did at least sound conciliatory.

Erdogan also indicated his intention, as ruling president, to push for a more robust process of democratisation within the country. However, it remains to be seen to what extent he will do justice to his own political ambitions.

Dr Cemal Karakas is a political scientist and works for the Hessen Foundation for Peace and Conflict Research (HSFK). His specialist fields include Turkey, political Islam, questions of European integration and external advancement of democracy in theory and practice.

A new global database shows a significant gap in reported COVID-related deaths, suggesting the actual worldwide death toll is short by at least 1 million. That's due in part to ... END_OF_DOCUMENT_TOKEN_TO_BE_REPLACED

Ankara's foreign policy apparatus is currently running at top speed. While politicians in the West busy themselves with evacuating Kabul and analysing the chaos, which not even ... END_OF_DOCUMENT_TOKEN_TO_BE_REPLACED 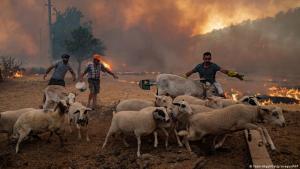 The ruling Justice and Development Party's inadequate preparedness and apparent poor and slow response to the large-scale devastating wildfires ravaging the country has unleashed ... END_OF_DOCUMENT_TOKEN_TO_BE_REPLACED

There are approximately 4 million refugees in Turkey, and they are increasingly the objects of hostility - as recent riots in Ankara have shown. Experts warn that the situation is ... END_OF_DOCUMENT_TOKEN_TO_BE_REPLACED

The village of Vakıflı (population 150) in the southern Turkish province of Hatay near the Syrian border is the last remaining Armenian village in Turkey. Lately, interest in the ... END_OF_DOCUMENT_TOKEN_TO_BE_REPLACED

On his recent visit to Cyprus, Turkish President Erdogan continued to bang his two-state drum, insisting that this is now the only viable option for the divided island. By ... END_OF_DOCUMENT_TOKEN_TO_BE_REPLACED
Author:
Cemal Karakas
Date:
Mail:
Send via mail

END_OF_DOCUMENT_TOKEN_TO_BE_REPLACED
Social media
and networks
Subscribe to our
newsletter