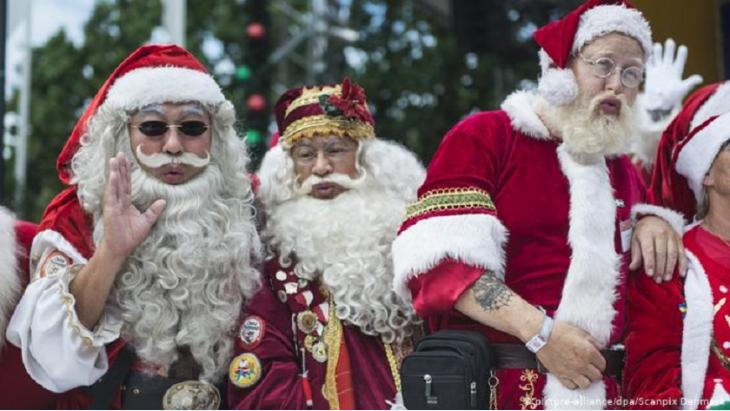 Men clad in red and white Santa outfits are no longer a rarity on Turkish streets. Legend has it that Noel Baba, as the Turks call Saint Nicholas, was even born near Antalya. Dilek Zaptçıoğlu has the details

"Dear children," a Turkish publishing house writes on its website, "did you know that Saint Nicholas really lived, long long ago – in our very own Turkey?" Various picture books tell the story of Noel Baba, as he is called in Turkish. He is becoming more and more popular with every year, much to the delight of crisis-ridden shopkeepers and children hoping for presents, of course.

At this time of year, men clad in red and white Santa outfits are dotted around the shops in Turkey's cities – all the way up to 31 December. Muslims, of course, don't celebrate Christmas; they give each other presents on New Year's Eve.

The question of whether Muslims ought to celebrate New Year's Eve is another topic of controversy – parallel to the introduction of Noel Baba. If it were up to strict Muslims and political Islamists, Muslims wouldn't be allowed to celebrate the end of the year on 31 December, as they have a different calendar.

The Muslim year starts with the Prophet Mohammed's migration from Mecca to Medina, on 16 July in the year 622 according to the modern Christian calendar. That means we will soon be in the Muslim year 1430, and New Year's Eve is actually a perfectly normal day, the third day of Muharram, the first month in the Islamic calendar.

But there are plenty of people who see that differently. Why miss an opportunity for celebrations and gifts? Here in Istanbul and other cities, the days get longer and longer in winter too, and the skies just as dark as in London or Berlin.

At the end of December, Christmas decorations and fairy lights are irreversibly finding their way into Turkish homes along with the friendly white-bearded old man - Santa Claus does come from Turkey, after all

​​As there is no Turkish tradition of festive candles, as originated from church ceremonies in the West, the Turkish tend to associate candlelight and oil lamps with power cuts rather than cosy winter evenings. Baklava is far removed from chocolate Santas, and Turkish delight is miles away from tins of sticky toffees.

But the much-cited globalisation is gradually breaking down the borders between the hotly contested civilisations. At this dark and cheerless time of year, candles, Christmas decorations and fairy lights are irreversibly finding their way into Turkish homes, along with the friendly white-bearded old man who pulls present after present out of his sack, which people first assumed was a fat tummy.

The cities are decorated in "New Year's Eve" style – and Santa Claus does come from Antalya, after all. There are all kinds of rumours and tales around Saint Nicholas, like many of the other countless Anatolian wise men and saints. According to the almost official version, he was born in Antalya, close to the nine-mile-long beach at Patara, in around 300 AD.

Various portents hailed his birth. He was the son of a wealthy wheat merchant and was christened Nikolaos. Even as a young man, he is said to have performed miracles, for example saving his mother from the ruins of a church that suddenly collapsed upon her during building work. When his father died, Nikolaos was the sole heir to a great fortune, and decided to donate it to the poor and needy.

​​In the port town of Patara lived a man who was suddenly struck by poverty and was unable to find husbands for his daughters because he couldn't afford their dowries. He was even thinking of selling the girls off to the highest bidder. Nikolaos couldn't let that happen.

To save the man's honour – although he can't have been particularly honourable in the first place if he had been planning to sell his daughters – Nikolaos climbed onto his roof one night and threw a bag of gold coins into the eldest daughter's room. There followed two more bags, one for each of the other girls. And so all the daughters were saved – and the story also explains why Greek orthodox depictions show Saint Nicholas with three golden balls.

According to another story, the saint went on a pilgrimage to Jerusalem. On his return journey, a terrible storm broke out, tossing his ship to and fro on the waves. His prayers saved the ship from going down, and even brought a drowned sailor back to life. From that day on, Saint Nicholas became the patron saint of sailors in the Aegean.

The times are a-changin': The traditional Saint Nicolas statue in Demre was moved to in a corner near the church. It had been replaced by the red-suited plastic Santa Claus statue in 2005

​​Saints are always wanderers, and Saint Nicholas was no exception. After a while, he moved from his birthplace of Patara to the neighbouring town of Myra, now Demre. The Bishop of Myra had recently died, and there was no end to the arguments over his successor; so it was decided that the first man to enter the church the next morning would be made the new bishop.

It was of course Saint Nicholas. And here too, he performed miracles and helped the needy. For instance, he ordered ships loaded with wheat to distribute part of their cargo to the poor before setting sail. Once on the high seas, the captains saw that their holds were full again – the saint had rewarded them for their good deed.

Bishop Nicholas is even said to have taken part in the Council of Nicaea in 325 AD, where heated debates were held on Christian theological issues such as the human or divine nature of Christ. The saint apparently died on 6 December 343 at the age of 65. Legend has it that the people of Myra buried him in a shrine in the church – but his remains were stolen by the crusaders on 20 April 1087 and taken to Bari. There are also relics of Saint Nicholas in the city museum of Antalya, Antalya Müzesi.

In recent years, it's not just business that has made a buck out of "Noel Baba of Demre" – the Turkish cultural ministry has also discovered the saint. In 2000, the Russian artist Gregory Potosky made a bronze statue destined for a central site in the town. Unfortunately, the mayor didn't like it, and it now guards over the entrance to the Noel Baba Museum, opened in Demre two years ago.

Noel Baba riding on a raft

Next, a plastic Noel Baba was erected on Demre's town square. This time, however, the tourism and culture minister Ertugrul Günay was against the sculpture. Noel Baba was dressed in the now traditional red and white outfit, and looked like a typical Santa Claus. The sculptor Necdet Can explains:

​​"We thought about it rationally and pictured Noel Baba in his time, true to reality. Demre is a warm place and he was a man like any other." A bearded Santa on a sleigh pulled by reindeer really did look rather out of place in the sunny holiday resort. So a new Noel Baba was swiftly commissioned.

Saint Nicholas is now depicted on a raft, at the impressive height of 11 feet and 3 inches. Bronze waves lap around the raft, which is pulled by two sea horses, with a little Lycian sailing ship at the front, the emblem of Demre. On Noel Baba's left shoulder sits a little boy, and a girl stands on the raft to his right, both holding gifts.

Turkish parents who want to give their children a special treat on New Year's Eve can buy themselves a red and white suit and false beard for the equivalent of 25 euro, or even order their own bearded visitor by telephone.

Kids don't mind whether "Papa Noel" comes on a sleigh or a raft – as long as he brings the latest computer game.

Dilek Zaptçıoğlu studied history and politics in Istanbul and Göttingen. The journalist and author is now based in Istanbul.

Home
Print
Newsletter
More on this topic
Jesus in Islam: Rasul Allah – The messenger of GodInterfaith holiday celebrations: Sugar Festival, St. Nicholas, Noel BabaThe Armenian patriarch in Turkey: "I would like all religions to be treated the same"
Related Topics
All Topics
Date:
Mail:
Send via mail

END_OF_DOCUMENT_TOKEN_TO_BE_REPLACED
Social media
and networks
Subscribe to our
newsletter