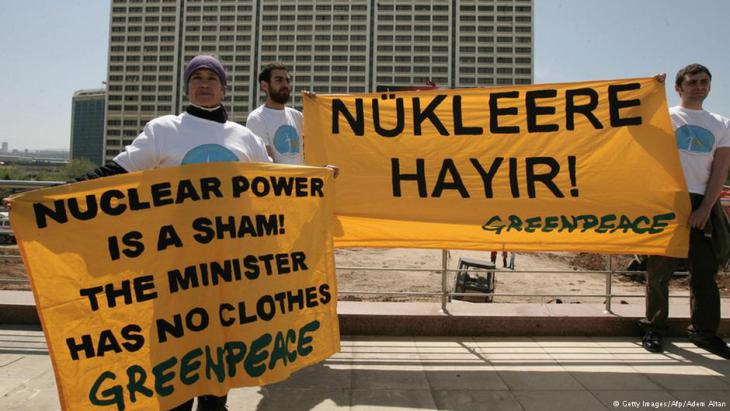 As the Turkish government is unveiling its plans to go nuclear, battle lines are being drawn between environmentalists and supporters of nuclear energy. But as Dorian Jones reports, Turkey's quest for nuclear power could have consequences stretching far beyond its borders

​​The location of the first nuclear power plant site has already been chosen – it's near the Black Sea in the region hardest hit by radiation from the Chernobyl disaster some 20 years ago. Battle lines are being drawn between environmentalists and supporters of nuclear energy. But Turkey's quest for nuclear power could have consequences stretching far beyond its borders.

Nuclear power kills, protesters chant in the heart of Istanbul. This demonstration is the opening shot in what is widely predicted to be a long and bitter dispute.

In the Istanbul office of the international environmentalist group Greenpeace, preparations are well underway for a major campaign. Coalitions are being quickly built with environmental groups across the country. Turkey seems set to become a key battleground over the future of nuclear power, according to Paul Horsemen, Mediterranean campaign officer for Greenpeace.

"This is part of what the nuclear industry regards as their renaissance. They are trying to prove that they have the answer to providing major sources of energy, without causing greenhouse gas emissions. And so this is the last gasp of the nuclear industry globally. So Turkey is crucial in terms of being the first or the major entry point to developing nuclear power in this region. So it's crucial that we persuade the Turkish government that nuclear energy is a dirty, old technology, especially in a region which is threatened with conflict and provides for major targets and we can't deal with the waste etc."

But the government seems unconvinced. Turkey has few energy reserves of its own. It's dependent on imports of increasingly expensive gas and oil. After meeting business leaders, the energy minister Hilmi Guler said nuclear energy had become a necessity.

"Nuclear energy is a must rather than a preference"

"It is nonsense to present nuclear power as the dirtiest source of energy. It's the cleanest form of energy. I'm sure we'll be able to deal with the waste it creates and we have our own uranium reserves to supply the reactors. To meet Turkey's growing energy demands, nuclear energy is a must rather than a preference."

But it'll be a hard sell for the government. Turkey has had first-hand experience of the dangers nuclear power can pose. 20 years ago radioactive fallout from Chernobyl spread along Turkey's Black Sea coast. For days inhabitants were told to stay indoors.

Just how many Turks died as a result remains unknown as the government refused to investigate. But according to an expert who carried out his own research, nearly half the inhabitants of one particular town have died from cancer since the disaster.

The risk of earthquakes

Another concern is the prevalence of earthquakes in Turkey. Seven years ago, two earthquakes close to Istanbul, killed more than 30,000 people. As a result, views like this man's are fairly common.

But Yalcin Sanyalin, the former head of the country's atomic agency, says such fears are unfounded with modern reactors.

"Today, when a reactor is running at full power, and an earthquake of the intensity of 7 or 8 happens and during that earthquake a Boeing 747 hits the reactor building, and at the same time an international power cut occurs, the reactor still closes itself down safely without giving damaging radiation outside the safety perimeter."

But safety isn't the only concern. Ankara's decision to pursue nuclear energy coincides with increasing international fears over the nuclear ambitions of Iran.

Mustafa Kibaroglu is an expert on nuclear proliferation at Bilkent University. He says the Turkish government will have to be extremely careful when explaining its motives to other countries.

"We're talking about a capacity which may last for half a century or more, and we do not who know who will come to power, and what kind of political circumstances we'll have in this country. In order to make sure this capacity will only be used for peaceful purposes, it will be desirable for Turkey to make a binding declaration that it will be used for peaceful purposes only, because in the 70s and 80s it was US concerns about Turkey's nuclear intentions which prevented Turkey from developing these capabilities. If Turkey does not make its intentions even more clear, the US and other countries may continue to harbour concerns and again maybe the situation will backlash."

"If Iran has nuclear weapons, Turkey needs them also"

The Turkish air force regularly patrols the country's border with Iran. For centuries these two regional powers have jockeyed for influence among neighbouring countries.

Both have powerful armies that have maintained a balance of power. Retired Turkish General Armagan Kuloglu, a strategic analyst at the Center for Eurasian Strategic Studies, warns that Iran's nuclear aspirations could force Turkey to make a difficult choice.

"We have a competition with Iran; we don't want to pass the regional control to Iran. And also if Iran has more power than Turkey, it's a danger for Turkey. For that reason Turkey has to prevent this in advance with the United States, with the United Nations. But if Iran has such kind of weapon, in this case, for creating the balance, Turkey needs nuclear weapons also, because otherwise Iran will be a very dangerous country in the region for Turkey and the free world also."

There'll be increasing concerns and questions about Turkey's nuclear program, as long as neighbouring Iran develops its own nuclear programme. That won't make it any easier for Ankara to convince Turks and foreign governments that it's pursuit of nuclear energy is in the country's best interests.

Short movies nominated for an Oscar often don't get wide public attention. But when one is about an Iranian girl seeking freedom from male domination by taking off her veil, ... END_OF_DOCUMENT_TOKEN_TO_BE_REPLACED

World-famous Iranian film director Jafar Panahi has been incarcerated for several months, even though Iran's Supreme Court overturned the verdict against him. Now, he has gone on ... END_OF_DOCUMENT_TOKEN_TO_BE_REPLACED

Young women are driving forward the protests against the Iranian regime, which have been going on for months. Literature provides clues as to why that should be, and why the ... END_OF_DOCUMENT_TOKEN_TO_BE_REPLACED

Visiting the country of her parents, murdered by the Iranian regime in 1998, German-Iranian artist Parastou Forouhar finds a changed society: hopeful, strong and courageous, ... END_OF_DOCUMENT_TOKEN_TO_BE_REPLACED

Ballet performances are prohibited in Iran. In her film "1001 Nights Apart", director Sarvnaz Alambeigi documents the history of dance in the Islamic Republic. By Fahimeh Farsaie END_OF_DOCUMENT_TOKEN_TO_BE_REPLACED

Iran's president Ebrahim Raisi is overseeing an unyielding crackdown. The current situation grimly echoes his role in a purge of political prisoners in 1988 END_OF_DOCUMENT_TOKEN_TO_BE_REPLACED

Comments for this article: More Nuclear Power at the Black Sea?

Actually, nuclear is a preference, not a must ...

The people, especially the environmentalists, prefer it, but governments typically footdrag because of the loss of fossil fuel tax revenue it causes.

This means there is loads of under-the-table government money available for persons willing to express insincere environmental and safety concerns.

END_OF_DOCUMENT_TOKEN_TO_BE_REPLACED
Social media
and networks
Subscribe to our
newsletter