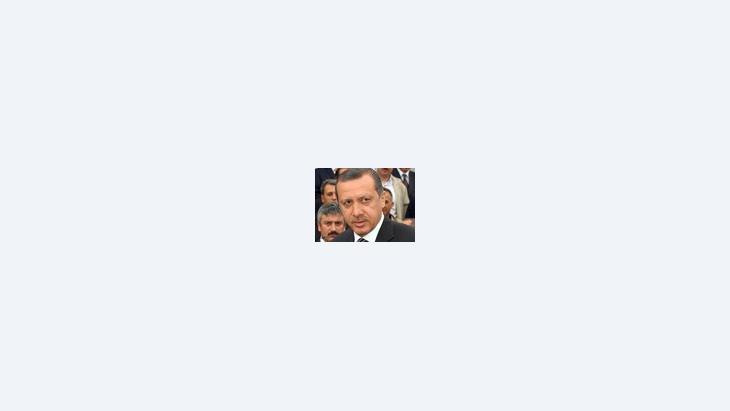 The opposition parties have been firing up nationalism for months, and are now accusing Erdogan of betraying national interests

​​Turkey's Prime Minister Recep Tayyip Erdogan is a highly gifted public speaker. But he has seldom captured his country's mood in such fitting words as after the EU foreign ministers' decision on Tuesday to put the brake on talks for Turkey's accession to the European Union. "The EU decision is an injustice against Turkey!" was Erdogan's initial reaction to Brussels' freeze on eight chapters of the negotiations.

The Europeans, with the German chancellor Angela Merkel and France's president Jacques Chirac at the helm, speak with deep conviction of obligations that have to be fulfilled and of Turkey having to open its sea and air ports for the Greek republic of Cyprus as part of the EU customs union.

But the man on the street believes Erdogan when he says, "We made our commitments in the firm belief that the European Council would keep its word." The council had promised to end the Turkish Cypriots' economic isolation, after the Greek Cypriots had unilaterally rejected Kofi Annan's plan to reunify the island.

That promise remains unfulfilled to this day. Since then, Turkey's policy has been to only open its own ports for Greek Cypriots if Europe's sea and air ports are opened up for traffic from North Cyprus at the same time. "That won't change!" Erdogan insists even after the EU decision.

Turkey's prime minister is not facing any difficulties from the electorate on this issue. In fact, the feeling that Europe is applying double standards is deeply rooted in the population. The Eurobarometer survey, conducted in Turkey in October, asked, "Do you trust the European Union?" Over 60 percent of Turks replied with a resounding "No!"

​​Are questions of cultural identity more important than political and economic criteria? And what role does Islam play concerning Turkey's integration into Europe? Read about these issues and more in our dossier

"How can it be," asks Fatma Biyik for example, a student of International Relations at the private Istanbul Bilgi University, "that the EU demands that Turkey resolves all conflicts with its neighbours (Greece, Cyprus and Armenia), but at the same time admits a divided island of Cyprus into the union?"

How can it be, one might add, that the EU supported Kofi Annan's plan for a two separate member states, the Greek Cypriots and the Turkish Cypriots, on the island, and at the same time regards the Greek Cypriot government as the sole political representative of all Cypriots?

Erdogan's bad luck is that his government is not only banging its head on a brick wall with its settlement-oriented policy in the Greek south of the island, where the government has long since gone beyond all political spin, and bid farewell to a bi-communal and bi-zonal solution.

Two key elections will be held in Turkey in 2007: in November for the national parliament, where Erdogan's Justice and Development Party (AKP) currently holds an absolute majority, and in May for the office of the state president, a very powerful position in Turkey.

The opposition parties, hoping to gain votes from the AKP, have been firing up nationalism for months, and are now accusing Erdogan of betraying national interests. "Sacrificing Cyprus is selling Turkey out," is their campaign motto.

One prominent opposition leader is Deniz Baykal, whose Republican People's Party (CHP) is still a member of the Socialist International, despite all. Deniz Baykal's socialists are popular with all those who want to prevent the AKP majority in parliament from electing Erdogan as state president in May.

If it does so, they claim – striking up the old story of the "Islamic threat" – the AKP would find it even easier to implement pro-religious policies – allowing female students to attend universities wearing headscarves, for instance.

Hardly a week goes by without the new Chief of General Staff Yasar Büyükanit summoning up the threat of Islam, with the support of the current state president, Ahmet Necdet Sezer.

That explains why the state president and the chief of general staff recently stabbed foreign minister Abdullah Gül in the back when he offered to temporarily open one Turkish sea port and airport for a year, to place diplomatic pressure on the Greek Cypriots.

One symptom of the situation is that even liberal politicians such as Erkan Mumcu, Chairman of the ANAP, are now joining the nationalistic fray, and liberal commentators such as Cüneyt Ülsever in the Hürriyet newspaper refer to a "state policy" on Cyprus, which the elected government is not entitled to change.

On Cyprus itself, where the division is said to be the reason for the blockade of the Turkish accession process, the development is taking a similarly worrying direction. The friendly and tolerant atmosphere between Greeks and Turks since the borders were opened in April 2003 has disappeared.

Since November, anyone buying or selling Greek property in the north of the island is likely to be arrested in the south, and cases of violence against Turkish Cypriots are becoming commonplace. On 22 November, Turkish pupils at the English School in the Greek part of Nicosia were attacked and injured at the school by Greek pupils from other schools.

The Turkish Cypriot Metin Münir, who spoke better Greek than Turkish as a child and has always actively supported reconciliation and unification of the island, is now disillusioned and writes: "For me, the Greek part is now just another country. We should sacrifice money and land to the Greeks, so that they give us peace in return."

Turkey's Application for Membership of the EU
Litmus Test for Europe
he gulf between the secular elite and religious forces in Turkey is wider than ever. But, asks Zafer Senocak, is that not all the more reason for the EU to support the secular and democratic forces in Turkey more than it has done in the past in order to bind the country more closely to Europe?

Reactions in Turkey to the EU Progress Report
Surprised at Europe's Forgetfulness
The European Commission's criticisms in the EU Progress Report on Turkey have met with incomprehension from the political leaders in Ankara. Accoding to Jürgen Gottschlich, the Europeans are unwilling to consider the background of the Cyprus conflict, and their analysis is very one-sided

END_OF_DOCUMENT_TOKEN_TO_BE_REPLACED
Social media
and networks
Subscribe to our
newsletter